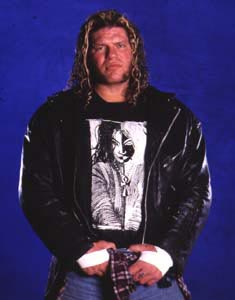 Scott “Raven” Levy is a survivor. He’s thrived for years in the hazardous world of professional wrestling. Examples? He persevered the late ’80s/early ’90s WWF (enough said), the rigors of being ECW’s top heel during their most formative and influential years, a love-hate run with WCW, a subsequently less-than-spectacular return to ECW, a return to the WWF, and above all of this, he has survived his own personal demons.

But Scott “Raven” Levy is much more than a journeyman wrestler. He has headlined, held titles and established himself wherever he has wrestled, running through a myriad of incarnations before arriving at his true calling and the persona which has garnered him the most success: the hardcore misanthropic loner known as Raven. When all is said and done, Raven’s name will go down in the annals of wrestling history next to the likes of Terry Funk and Mick Foley — hardcore wrestlers who helped influence professional wrestling, steering it into more violent, real and psychotic new sea.

Taking time out of his preparations for Raw Is War a few weeks ago, Raven was gracious enough to talk to SLAM! Wrestling about his current status in the WWF, quitting WCW, his tenures in ECW and the battles he has had with himself throughout his career.

“I wanted to come back here [the WWF] from the time I left in the first place six or seven years ago but the circumstances were just never right,” commented Raven on his recent return to the WWF. “Either I wasn’t available or they weren’t available or they didn’t want me. Whatever. It never seemed to work out. Maybe they weren’t interested. I don’t know. It just never came up. Eventually I was in WCW, when they were still doing quite well, but I wasn’t happy because they wouldn’t use me to my full potential. Eric [Bischoff] had a meeting and said if I wasn’t happy that I could leave,’ I said ‘all right’ and I left.”.

“I was going to try to come to the WWF then except he [Bischoff] wouldn’t let me go, he said I could come back and work for him or I could go to ECW,’ so I figured I’d go back and work for Paul [Heyman] for the second time. They [ECW] had just signed with TNN and I thought they were going to do things, but they didn’t. Then it was just a matter of making sure they [the WWF] were interested when my contract expired and they were, so I signed,” recalled Raven.

Since signing with the WWF, many are calling Raven’s latest tenure his “last chance.” Just like Johnny Cash says, “He’s been everywhere, at least twice.” Couple that with the stigma of his wilder years and it’s easy to see why people might say that. Still, it seems more appropriate to see Raven’s current stay in the WWF not as a final chance but a new beginning. A resurrection, if you will. Raven concurs. “I can see that, like a phoenix rising from the flames, absolutely. I’ve only been here a couple months, so it’s still a feeling out process and they have so many people on the roster. It takes a little bit of time, they have their own particular style and way of doing things and even though I watch the show every week at home, it is still different when you get there. It’s still a feeling out process by both parties but it’s been good here so far,” he said.

Never at a loss for words, when asked what Raven can bring to the WWF that may be lacking in a federation packed to the gills with superstar calibre talent, he responds articulately, assuredly and with absolute conviction. “I think my verbal dexterity. I think my ability to garner heat, to really make people hate me or love me depending on whether I’m a babyface or a heel. I bring a three-dimensional character which this business has always been sorely lacking in. Most people are two-dimensional. I bring a whole depth and back history to the character.”

Raven pauses and then continues with a chuckle, “and my high-flying ability, sometimes I fly off the bottom rope. Seriously, though, I’ll throw a dive over the top, here or there, I’ll break it out when the situation warrants it, but I don’t do it well enough or acrobatically enough to do anymore than that or it would take away from when I do it.”

By the same token, when asked his opinion of the current WWF product, Raven is just as forthright and adamant in his views. “I like it,” he stated. “I’m an enormous mark for Triple H. I think he’s the best worker I’ve ever seen, period, bar none.”

Even better than say, a Ricky Steamboat or a Ric Flair in their prime?

“No one else can touch him [Triple H],” Raven proclaimed. “His work is volumes better and if you watch a lot of that stuff back then, they weren’t nearly as good as you remember, they were great for their day but it doesn’t hold up anywhere near the level that Hunter’s does.” Raven continued, switching icons but maintaining the thread. “Bret Hart always talks about ‘the best there is, the best there was and best there ever will be,’ and nothing against Bret because he was a hell of a talent, but he’ll never be the ‘best there ever will be’ because Hunter is way better than him, as good as Bret was, Hunter is that much better, absolutely.

“It’s kind of like the more you know about something the more critical eye you can put to it,” Raven elaborated. “I love music and I’ve got two months of guitar lessons under my belt, but I don’t know enough about music to really have that critical an ear. If you put two drummers in a room and said pick who’s who, I couldn’t tell you. Whereas my roommate, who’s a musician, he could hear a drum fill and tell you who’s who, because the person’s fingerprints are on it. The more you learn about wrestling, the more you realise that some of the stuff Hunter does, it’s just so brilliant.”

“My work,” Raven continued, “it’s really weird, in some circles I’m considered a hell of a worker and some people, well, whatever, and some people are like, ‘yeah, he’s alright.’ A lot of what I do is in the same vein. It’s how I make my opponents look good. Put me in a match with someone and you’d think ‘Wow, what a hell of a match,’ and ‘Wow, Raven’s opponent was phenomenal,’ but a lot of the time it’s me making them look good, which you don’t see.”

“One of my proudest feats was working with [Terry ‘Bam Bam’] Gordy [in ECW], and Gordy had that drug overdose in Japan, his brain just wasn’t the same and it was his first match back in the States in a long time. I put together a very simple match, at least it was simple for him, but to the observer it was this eventful match of, maybe not of mythic proportions, but it was a huge deal and everybody was convinced that Gordy was the old Gordy again, and then when he worked his next match and they saw that he wasn’t. People realised the magic that I put forth. That’s one of my proudest moments, that match, being able to get that out of him at that stage of his career.

“The stuff I do isn’t the obvious, there is a lot of subtly and there is a lot that you don’t even realize I’m doing, and Hunter does that better than anyone.” 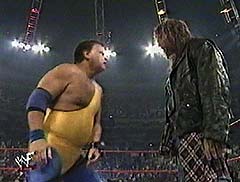 Raven returned to the WWF at the Unforgiven pay-per-view earlier this year and punked out Jerry Lawler.

“I don’t know what they’re going to do,” claimed Raven. “It’s no more clearer to me than it is to the fans. I think that’s fine. I think it adds a degree of spontaneity. The character can behave in a more original way than if I have time to think about it and beat it to death. I think there is more of an originality that’ll come through. It would be one thing if I was involved in the writing, which I have no interest in doing, and since I’m not, I’d just as soon find out when they tell me because then there is a spontaneity that you get whereas if I knew three or four weeks in advance, I would think about it. I’d come up with seventy-five new ideas and change it, then I’d come up with something that I’d be set on and then I’d rethink it, analyze it to death and come up with something different. Ultimately, what I come up with first is usually the best, so when they say ‘boom, this is what we want you to do’ and how I think to portray that is usually my best call. My first instinct is usually my best.”Raven undoubtedly brings a unique aspect to the WWF. A character with an extensive background, an athlete just as willing to put his opponent over as himself, and a psychological aspect that hasn’t been present since the calculated machinations of Jake “The Snake” Roberts or the demented rampages of Mankind — not to mention his extensive aerial skills. Nobody, not even Raven, knows what the WWF is going to do with him or his talents and this uncertainty doesn’t concern him in the slightest.