“My main goal right now is to just hold onto it,” he told SLAM! Wrestling in a phone interview conducted nine days after the November to Remember pay-per-view where he won the title. “I’m going to defend it against everyone… C.W. Anderson, The Sandman, Jerry Lynn, good guy, bad guy, anybody. I’ve been given the ball to run with, so I don’t want to limit myself.”

He has already made good on that, having met both Jerry Lynn and the Sandman in title defenses at the recent TV tapings in Poughkeepsie, New York. Prior to his match with The Sandman, though, the “Old-School Hero” seemed a bit reluctant to face the cane-swinging hardcore icon. As when he first entered ECW, Corino tried to avoid the match, citing an old appendix injury as the reason. Could this mark a return to his original “anti-hardcore” gimmick? 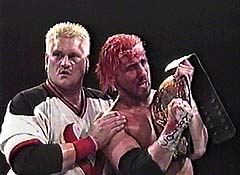 “Well, it’s different in that I’m not doing the comedic stuff anymore. Now, I’m playing more of the sneaky guy who does whatever it takes to keep the belt. If the fans boo me, they boo me. If they cheer me, they cheer me. All that matters is keeping the title.”

As for the fans cheering him, he’s getting used to it. “It’s a big responsibility. There’s a “face” code of conduct that you have to be aware of. You can’t turn to a heel fan and yell ‘No, YOU suck!’ ”

What Corino does like about moving back towards the “anti-hardcore” gimmick is the fact that he’ll have to spill less blood than in most of his recent matches. During the Poughkeepsie, NY tapings, he went on a post-match rant, claiming that fans don’t respect him unless he sheds buckets of blood. To some extent, Corino believes that that’s true. “I’m a bit tired of it. It’s a shame that many people have this mentality of “What have you done for me lately?”, like I have to bleed in every match. I’m looked upon as the best bleeder in the business… that’s not a reputation I really want.”

It was his bleeding ability that led to jealousy among the other wrestlers in the locker room, according to some recent Internet reports. Claims were made that Corino was receiving backstage heat from other wrestlers who felt pressured into “blading” themselves to keep up with Corino’s bloodflow.

Corino dismisses those rumours, however.

“If someone was upset, they would run to me or to Paul (Heyman, owner of ECW), not to the Internet. Who are these sources (cited in Internet reports) anyway? Where do they come from? I read in one report that Joey Styles had heat because of his attitude. Joey is probably one of the most popular and respected guys in the back. Maybe somebody felt that he snubbed them, so then they go and print that he’s got an attitude. There’s very few legitimate reporters out there; it’s more like the tabloids.”

Another story that was floating around is that his on-screen split with Dawn Marie was prompted by legitimate friction between the two backstage. “Not true,” Corino says pointedly. “We were only supposed to be together for a little while anyway. People think that because an angle isn’t addressed right away, that it must be legitimate. We go way back… she used to manage me and Simon (Diamond) in the indies. People should do some research before ‘reporting’ these things.”

Another frequently-mentioned name in such reports is former WCW “Outsider” Scott Hall, who made his ECW debut at the Poughkeepsie tapings.

Having fought many personal demons in recent years, Hall is reported to be a disruptive and destructive influence in the locker room. Corino disagrees. “[He] has been nothing but professional,” says Corino. “He knows his reputation, and he wants to clean himself up. There might have been this preconceived notion of ‘Is he okay?’ before, but the boys have really embraced him. Our locker room has always been very supportive. We’ve always seen ourselves as the “Land of Misfits” anyway, so he’ll get along great. I think his being here will be a good step for the promotion.”

Good enough to see ECW take over the Number Two spot in the industry (after the WWF and WCW)?

“It’s hard to see (us doing so). Yes, WCW is having problems, but it’s still backed by a multi-billion dollar company. The WWF is a brand name, Vince (McMahon) can do whatever he wants right now, and WCW’s next. I’d say we’re a strong Number Three.”

One wrestling promotion who is bucking for that spot is the XPW. Using the hardcore formula which drove ECW’s success, and even some former ECW stars, the promotion has become very forthcoming about their desire for ECW’s spot, going so far as to have several XPW wrestlers interfere in a recent Pay-Per-View event.

“Not to disrespect them, but I don’t see them as competition until they’re running weekly shows. Just because you’re on TV doesn’t make you competition. Really, I think that Ohio Valley, Memphis, Power Pro are more of a threat to us, because they’ve got guys working three or four days a week. In ECW, (wrestling)’s a full-time job; in the XPW, you still have to be working another job.”

Referring to the pay-per-view incident, Corino feels that XPW had the right idea. “They kind of shot themselves in the foot. It was different when we did it (ECW wrestlers invaded two episodes of WWF Raw a few years ago), because our ‘invasion’ was part of an angle.”

Another difference between the promotions is ECW’s commitment to run monthly pay-per-view events, a recent development, as they traditionally ran them bi-monthly. “I like (the new schedule), it keeps things fresh. People don’t have the attention spans anymore to keep storylines extended. Today, the trend is to ‘hotshot’ angles to keep things moving, not like in the past.”

While Corino didn’t say who he would be wrestling at the upcoming December 3 PPV event, he does have some of his favourite opponents in mind. “I would love to wrestle C.W. Anderson again. Jerry Lynn, Justin Credible. I really would like to wrestle Nova for the title. He and I go a long way back, in fact I wrestled my ECW debut match against Nova. That would be pretty cool, to go full circle.”

However, most ECW fans would rather see Corino face the company’s most popular star, Rob Van Dam at some point in the future. Van Dam has been absent from ECW for a couple of months while filming a movie in Thailand. “I’ve wrestled him two times, and would love to face him again,” says the champ. “He’s an amazing athlete. But I have a feeling he and Rhino aren’t done (feuding yet).”

In the meantime, Corino is anxious to get some of the other under-exposed stars into the spotlight, possibly into the main events. “We’ve got some great new guys. The Rockers Y2K, C.W., Swinger, Simon Diamond, Kid Kash. With the older guys coming back, guys like Dreamer, Spike (Dudley), and now Hall, our roster is the strongest it’s been in a long time.”

Corino is also hoping to eventually fill the locker room with the graduates of his “Cool School” of wrestling, located in Reading, PA. Besides training the students, Corino is also the booker and producer of the school’s shows, held every three weeks.

“It’s quite a challenge, but I really enjoy it,” says Corino. “I’ve learned a lot from guys like Tommy Dreamer, Paul, and Dusty (Rhodes). I’m always giving Paul ideas, and he’ll be like ‘No, that won’t work, because of this and this and that.’ I take that, and bring that back to my own show.”

Although being part of the management team does have its appeal, Corino maintains that he’s not ready to hang up the wrestling boots quite so soon. “I’m 27 years old, and want to stay wrestling for another ten years.”

In the meantime, his goal is pretty straightforward: “Getting out there, entertaining people, having a fun time, and earning the people’s respect.”