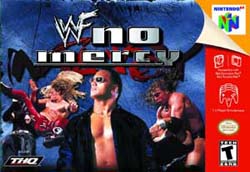 Malenko is stunned after my stalling suplex through the table. Quickly I throw him back in the ring. While Malenko tries to recover form the blow, I grab him and apply my finishing manoeuvre, a leg-trip STO. It’s all but a formality from here. 1…2…3! I’m the new Light-Heavyweight champion of the WWF!

But wait! Howard Finkel announces that due to Eddy Guererro’s interference early in the match, Malenko keeps his belt.

Welcome to WWF No Mercy, the latest wrestling game from THQ for N64.

The follow-up to the highly successful Wrestlemania 2000 has received much hype in recent weeks, with promises of exciting new features and expanded options. Let’s take a look at the game.

The one thing that keeps bringing gamers back to THQ more than anything else may be the simplicity of the controls. There are no complicated four or five-button sequences needed to execute a move here, making the pick-up-and-play ability of this game very high.

Some controls have been altered from previous THQ incarnations, but for the better. There is now a single button for throwing your opponent in and out of the ring, as well as a separate one for getting weapons.

This has improved by leaps and bounds. The crowd looks great, the wrestlers are more detailed, and the sound is amazing. I still think the Titantron videos are a waste of time, but there have been a few more original entrance themes added, which is way cool. No complaints here.

A huge move set has been expanded greatly. Aside from the move-list expansion that comes with the new roster, a new feature as been added, where you can do a running grapple (eg. Scottie 2 Hottie’s face jam). This feature is not as clean as it could be, but we should keep in mind that it is a first for THQ. I also like that they have made certain submission moves ‘special’ moves, making them feel more like finishing manoeuvres than before. The only thing I really see missing here are flying grapples such as Lita’s huracanrana, but that will likely be added in the next edition.

The most talked about move is being able to put your opponent through tables. This is an interesting feature, but the parts disappear after the table has been broken. I think it would be better if you could use the pieces to beat your opponents with, and as far as I can tell, you can’t move the tables, so there’s no chance of the 3D through the table.

The move-list has also been edited to make things more organized. Where WM2K listed each powerbomb/pin combination individually, No Mercy lumps them altogether, making it easier to find the move you want to add to your wrestler’s arsenal.

The biggest complaint I have here is that once again the pre-existing wrestlers cannot have their move set edited. This is somewhat problematic, as wrestlers are changing their arsenal quite often now.

One word defines No Mercy’s roster — extensive. You’ve got virtually every wrestler in the WWF here, including Metal mainstays Taka Michinoku and Sho Funaki. The good part of the roster is that some superstars are lumped into one character. For example, Terri Runnels and Debra share a character. This means more space for creating characters, which is my favourite part of the game. In all, there is room for 18 characters to be created, expanded from 16 in WM2K.

Of course, there are also the hidden characters. The list from WM2K was not impressive, but has been improved in No Mercy. Thus far I’ve been able to unlock Shane McMahon, Mae Young/Moolah, and JR/Lawler/Patterson/Brisco. Other characters that you can unlock or buy at the Smackdown Mall include Mick Foley, Shawn Michaels, Cactus Jack, and Ken Shamrock. I’ve heard rumours that you can unlock Andre the Giant, but I’ll believe it when I see it.

The big additions to No Mercy are the ladder and hardcore matches. The ladder match is an incredible feature. Not only can you use the ladder as a weapon, but you can also do moves off of it. The match itself is an incredible challenge, as even the slightest push by your opponent will send the ladder, and you, tumbling. The hardcore matches have been expanded to include backstage brawling in several settings, including a locker-room, a bar, and a parking lot. Weapons also do not disappear when dropped, though you can only have 4 or 5 sitting around before the engine starts slowing. 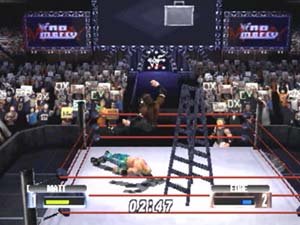 Table matches are a big plus.

Speaking of slowing engines, the tag team matches are incredibly slow. Anytime more than two characters are on the screen, the game gets noticeably slow-paced, and it’s at its worst in tag matches. This is a major drawback for the game, and hopefully it will be improved.

The championship mode has been greatly improved. Instead of fighting through a calendar year, you chase after each belt individually, going through ‘chapters’ (a series of matches). Storylines have been introduced here, and it’s a great way to keep a flow going through the game. You also earn money through each match, which is used at the Smackdown Mall.

The survival mode — well — basically it’s a 100 wrestler Royal Rumble. To put it one way, it took me a half hour to get to #40 before being tossed. I can’t imagine making it to #100 on only one character. The challenge to me seems to be as much hoping your fingers don’t go numb, as it is to make your way through the roster.

I’m still waiting on Hell in a Cell.

The Smackdown Mall is an interesting concept. You collect money through matches, which you use to buy things such as characters, costumes, and moves. I like this option because it truly gives you something to fight for. The coolest part is that some of the costumes are from gimmicks past, including Undertaker, Bossman, and Mankind’s old gear.

A great game by any standards, but there are some things that can be improved. Unfortunately we may not see those improvements on N64. By the time WM2K hit store shelves, many were already talking about No Mercy. In this case, No Mercy may be the last THQ wrestling game for N64 before all titles are moved to the GameCube due out in the spring. I’d definitely recommend picking up this game.