At 35 years of age, Glenn Kulka finds himself duking it out on a regular basis with kids 10 years his junior, but more years in the ring than he has.

The 11-year CFL defensive end currently calls Memphis Power Pro Wrestling home, and is able to easily talk about his “Triple A” experiences with SlamWrestling.net. 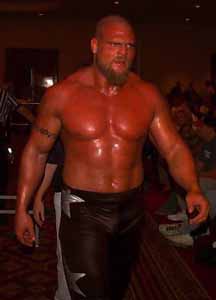 For one, he freely admits that he has “to wear a couple more icebags than everyone else once in a while” because of the beating his body has already taken.

Besides the years in the CFL, Kulka was also a scrapper in the played in the ECHL for the Hampton Road Admirals and the WHL for the Spokane Flyers.

But it was during a Saskatchewan Roughriders promotion with the WWF in 1995 that the first inklings of “Kulkamania” were planted. That night at the Regina Agridome, he helped Bret “Hitman” Hart gain a win over Psycho Sid, who was managed by Ted DiBiase. Hart thought Kulka had what it took to be a wrestler, and two years later, Kulka was being trained by The Hitman and Leo Burke at Hart’s Calgary home.

After a summer on Emile Dupre‘s Maritime Grand Prix Wrestling circuit, Kulka signed on with the WWF.

Unfortunately, he broke his leg in a match against The Jackyl (Don Callis) a short time later, and his new career was side-tracked.

Kulka said that his leg is as good as ever. “I can pretty well do everything I could before I had surgery, so that’s not a problem any more. Not a hindrance at all.”

He’s enjoying his time in Memphis, but chooses his words carefully when describing it.

“It’s a different style of wrestling, different mentality towards it. It’s something that takes a little bit of getting used to. It can be like anything – once you figure it out, you’ve just got to do what it takes to get over.”

It’s being a real learning experience for Kulka — out of the protected environment of the WWF training dojo into the world.

“Everyone has their own agendas as far as what they want to see done. So to me, to be honest with you, it’s been more of a feeling out process and evaluating the situation myself, and just adapting it to what I want to do.”

The Edmonton native is wrestling under his own name, and is a heel. He has no other gimmicks however, and from the sounds of it, Kulka has mixed feelings about that situation.

“It was almost like I didn’t really want to, or make a big effort to try and get a gimmick, so to speak, or a name because, as you very well know, if they want to use you up top, half the time you end up with something different anyway,” he said before continuing.

“In hindsight, looking back I think that I should have put some sort of handle on myself – of any kind. Just for people to be able to recognize and remember you a little bit clearer.”

His roommate in Memphis was until recently Matt Bloom, now graduated to the WWF as Prince Albert, second to Droz.

Kulka is happy for his friend, but recognizes that Memphis is a testing ground as much as a training ground.

“A lot of the time you’re ripping it up down here, or ripping it up somewhere else, and if they [the WWF] don’t have a slot for you, or if you don’t fit into their scheme of things as far as what they’re doing at that moment, you don’t get a chance,” he said. “If you don’t do well here, they might look at this as a last hurrah type of thing.”

There has been talk on the Internet that Kulka has been released from his WWF contract, but it isn’t true, he said.

Instead, he will be sticking it out for a while longer, even on the smaller circuit.

“As long as I see myself learning things, and I am getting better, then I will definitely stick it out,” Kulka said. “If you run into a point where you’re really stagnant, you’re not learning anything and you’re actually forming bad habits because of it, well, then you’ve got something to think about, evaluate.”