Glenn Kulka never had trouble speaking his mind. Reporters could always count on a juicy quote from the former Canadian Football League defensive lineman and WWE wrestler. His latest career choice should come as no surprise — sports talk radio host.

Wrestling fans will remember Kulka from his time spent with various promotions ranging from Atlantic Grand Prix Wrestling to the WWE. Kulka got his start with pro wrestling in 1995 when, as a member of the Saskatchewan Rough Riders, he teamed up with Bret Hart for a show in Regina against Ted DiBiase and Psycho Sid. Hart was so impressed that he offered Kulka the chance to train as a wrestler. 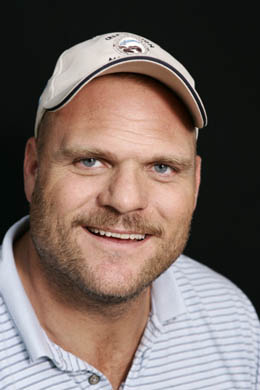 Two years later, Kulka accepted the offer and found himself training in Hart’s home. Kulka has bittersweet memories of his time in Calgary. “I was with other guys like Ken Shamrock and Edge. We practised for six months just learning how to take the bumps and the falls. Every morning, I would wake up very sore.”

Upon graduating from Hart’s informal wrestling school, Kulka toured with the Maritime-based Atlantic Grand Prix Wrestling, facing stars like Bad News Allen. Kulka cites his matches with Allen as some of his favourite. “Bad News was a pleasure to work with. He was always a professional and never made the other guy look bad.”

The WWE saw potential and offered him a standard contract. Unfortunately for Kulka, just as his career was getting started with the WWE, he suffered a devastating knee injury. “I was wrestling an independent show in Regina against Don “Cyrus the Virus” [Callis]. I blew out a knee and had to rehab for six months. The knee was never the same.”

During his rehab, Kulka was sent to the WWE wrestling school in Stanford, Connecticut where he trained with Dory Funk Jr. and future stars like Kurt Angle.

In 1999, Glenn attempted to return to wrestling with the Memphis-based promotion Power Pro Wrestling. “It was a real culture shock wrestling around Tennessee and Arkansas,” Kulka said. “We would have some shows in some real back-water places. It was also tough because my knee was sore all the time.”

The situation was made worse when the WWE released Kulka from his wrestling contract in 2000.

Kulka did not see his future advancing in the wrestling world and decided to return home to Ottawa, Ontario. Forays into gym ownership and managing a car dealership proved to be relatively short-lived. In 2004, Kulka found his stride when he was asked by local Ottawa sports radio station, The Team 1200, to do on-field commentary for the Ottawa Renegades football games. This experience eventually led to a full-time gig as the co-host of a morning sports talk radio show.

Dave Mitchell, program director for The Team 1200, feels Kulka is a welcome addition to the morning radio spot: “Glenn has a rather raw, cut-to-the-chase way of interviewing people, and we like the results he gets. He’s as fit as any player, and occasionally wants to suit up and get in the action, but we’ll be happy to keep him on the sidelines filing reports, and jawing at visiting teams.”

Kulka mostly enjoys his new role on the radio. “I get to apply years of being an athlete to my work. I have a first-hand knowledge base that most other guys cannot call upon.”

He does have one complaint, however. “I do miss the money of being a football player and wrestler. Now I have to juggle my job on the radio with a second part-time job. I’m also the father to a 3-1/2-year-old and a 2-year-old so that keeps me running.”

Kulka is no Howard Stern, but there are similarities. “My inability to sugarcoat things sometimes gets me in trouble,” he explained. “Hopefully, I will never have to be politically correct to stay on the radio.”