Slam Wrestling’s Greg Oliver finally interviewed ‘Black Hart’ Owen Hart over the phone from his Calgary home on Friday, March 6, 1998. He’s on the shelf at the moment due to injury, but enjoying the time with his family. In fact, the interview was cut short because he had to run out to take one of his kids to swimming lessons.

Below is the transcript of the 20-minute interview. Owen Hart has agreed to talk to us again soon, and hopefully we’ll get to the many, many more questions that you, our readers, have sent in. I’ve given credit to the readers who sent in questions. 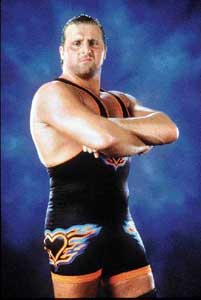 Q: What’s the details of your injury?
A: I just got it analyzed at the Calgary Stampeder clinic. I have a severe tear in my right ankle ligament. I just really, severely strained it mid-step coming off the ropes this Monday night on RAW against Barry Windham. Just stepping off the second rope, I stepped onto his boot and rolled my ankle and ripped, tore the ligament on the right side.

Q: How long are you going to be out for?
A: This rehab that I’m going through is really intense. Geez, every day since it happened Tuesday night, three days and I’m still in a cast, but my mobility is much better. I could even try to be back for TV tapings in Arizona next week.

Q: So you didn’t wrestle Tuesday night, I’m to understand?
A: That’s where I hurt it, Tuesday night. In Wheeling, West Virginia.

Q: On Monday night, you faced Mark Henry. Do you prepare differently for a big guy like that with not that much wrestling experience?
A: Exactly. That’s a big factor. His inexperience. The fact that he is real big and real strong. And probably due to his lack of experience, he gets real nervous.

Q: Do you find it one of your roles to try and help some of the new guys?
A: I think so. I think the wrestling background that I have and the limited number of experienced wrestlers in the WWF has right now. I’ve been with WWF for eight or nine years. I’ve been in wrestling for a dozen years. So I think it’s kind of a compliment to be looked at — you’re a leader rather than a follower.

Q: Is it something that you’ve learned from your father? Training wrestlers?
A: Yeah. I think just from the environment that I’ve grown up in. My father’s the biggest factor in that.

Q: Well, what we’ve done is we had the fans send in questions — what would you like to ask Owen Hart. There’s a wide variety of things. We can save some for another time. But let’s get to the ones people really want to know, which is of course, why didn’t you jump ship when Bret did? [Ahmet, Jodi Feldman, MANY others]
A: Well, I think there’s different circumstances for what happened. We all know and are aware of what happened between Bret and Vince McMahon and it’s a sad affair because I don’t think either party benefited. They had a 14-year relationship that was, until the end, very very strong. Bret was one of the catalysts, who told me, when I signed my deal, he said, ‘you stay with Vince McMahon. He’s reliable. He’s the best guy in the business to work for.’ And I think he genuinely meant that. Then this whole affair came with Vince McMahon and Bret — that’s their deal. They can talk about what happened between them. When it all came down, the first thing I did, I called Vince that night, right after it happened. I felt it was in my best interests not to go on the road for a few days, because I didn’t want to be around the other wrestlers, I didn’t want to be around the agents, and it wasn’t appropriate to go to work. I didn’t think it was appropriate for me to be around anybody until this all died down.

Then I negotiated with Vince over a period of weeks. I said it would not be in my best interests to continue to work for him. When your brother just punches the boss, the same guy I’ve got to work for, how am I going to get a fair shake? He assured me I would be given a fair deal and there would be nothing held against me. It had nothing to do with me. I’m very close to Bret. Our relationship is very close. I was really hurt by what they did to Bret. He assured me this isn’t going to happen to you. Anyways, then we re-negotiated. This went over two or three times because I was too apprehensive to say ‘Okay, that’ll be great and I’ll continue working here.’ I’d go back and think about it more and go back and talk to Vince and say ‘I just feel uneasy about everything.’ And I told him that ‘I’ve been talking to Bret and I told him that you said I could trust you. Then again, Vince. You told Bret he could trust you. And after fourteen years, look at what you did to him. So how can I take your word literally, Vince?’ And he said, ‘don’t worry. I assure you we’ll be good to you.’ The bottom line is he said ‘we are not willing to let you go. You’re under contract. And you’re young. You’re much younger the rest of the Hart Foundation guys and we see that you’ve got lots of talent, you’ve got lots of experience, you’ve got no hang-ups.’ I’ve never had any problems with the company. I wasn’t injured at the time. I don’t have any drug afflictions or whatever. He said ‘you’re perfect, you’re a role model guy to have in the company. I just cannot afford to lose you.’ I guess their loss and Ted Turner’s gain of getting me would have been very detrimental to the company or something like that. ‘I’m not willing to let you go.’

Q: How did that make you feel?
A: It made me feel good in a lot of ways. It would be disheartening if he said, ‘we don’t want you. You can go.’ That would make me feel like I didn’t have any value. And we talked about being the big fish in a little pond, kind of thing. I think it’s a factor. WCW has so much talent there, they get lost in the shuffle. Basically I didn’t have much control in the situation anyways. Because of my contract, I’m committed to the WWF unless they breach. They hadn’t done anything to breach my contract. With what they did to Bret, I might have had a small leg to stand on, if I said, ‘hey, he contradicted my brother’s contract’, but that doesn’t really involve me.

Q: So did you get a raise out of the deal? [Jason Davoodi]
A: Well, I don’t really want to disclose whether I did or not. It’s supposed to come in due time.

Q: Is there any pressure for you to leave the WWF by your other family members? [Jessica Pelish]
A: Well, I don’t think that anyone’s trying to convince me. I do think there’s a lot of emotion in what happened with Bret and Vince. There’s more just cautioning, be careful. Because of all the years, fourteen years for Bret and for that to happen to him, hey be careful, because if it happened to him, it could happen to me.

Q: Do you want to leave one day when your contract is up? [Jason Davoodi, MANY others]
A: Well I’m hoping that when my contract is up, I’m out of wrestling. I’ve been smart with my fiscal affairs. At the end of the tunnel, I’ve kindof made plans. My contract expires, if I wrestle, it’s strictly for my own recreation. Financially, I’ll be set.

Q: Do you have in the back of your mind to try and get involved with local promoting, perhaps with your brother Bruce? [SoRock]
A: I don’t think so. Although this business is very addictive. I’ve seen many people say I’m quitting or I’m getting out of it and just can’t. My aspirations is to spend all my time with my family. I’ve paid my dues for twelve years now. If I continue for five more, that’s seventeen years working at a pretty hard clip. I think that at that point my family, my wife and kids, have been compromised enough. I need to start focusing on my family and letting go of wrestling.

Q: What kind of things do you want to do once you’re out?
A: I’ve bought some property on a lake. I plan on doing a lot of boating and fishing. I want to continue to stay in shape. And who knows, I might do ten weeks a year in Japan. Something just to motivate me to keep in shape, keep involved a little bit but not have to deal with the politics, pressures that are so intense right now.

Q: Well, one last question right now. You’ve started to use Bret’s signature line. ‘The best there is, the best there was, the best there ever will be.’ How did that come about and why?
A: I guess that I’ve been using that more lately because Bret’s not there. I was actually using that long, long ago when I was rivaling with Bret. The ‘Excellence of Execution’, ‘The best there is, was and ever will be’, that was more of a spoof back when I was fighting Bret. Now it’s kind of, I don’t know if it’s a tribute to Bret or what. One time I was in the interview room and I was trying to think of a way of ending it, and I said ‘I’m the very best.’ I followed it up the next time. The first time I did it was for a show in Canada. It was Toronto or Winnipeg and I was getting my dig back at some of the other guys in the company. The Harts are the best there is, the best there was, the best there ever will be. They really went crazy. Canadian fans are pretty smart to what happened in the WWF. So when I said it, they said ‘he was putting his brother Bret over’. It’s good terminology and when people hear it, they think it’s synonymous with Bret Hart. Maybe it’s an indirect way of them remembering Bret. And it is not the same. No matter what we do on the road, or whatever, without Bret — especially Bret. Bulldog was a factor too, but he didn’t have the magnitude that Bret had. There’s an obvious void in the locker room without Bret. He brought experience and respect to the company. They miss him, you know.

Q: Thanks for taking some time to talk to us, Owen. Hopefully we’ll talk to you again next week.
A: Okay, good enough.