Road to The New Beginning full of blindsides 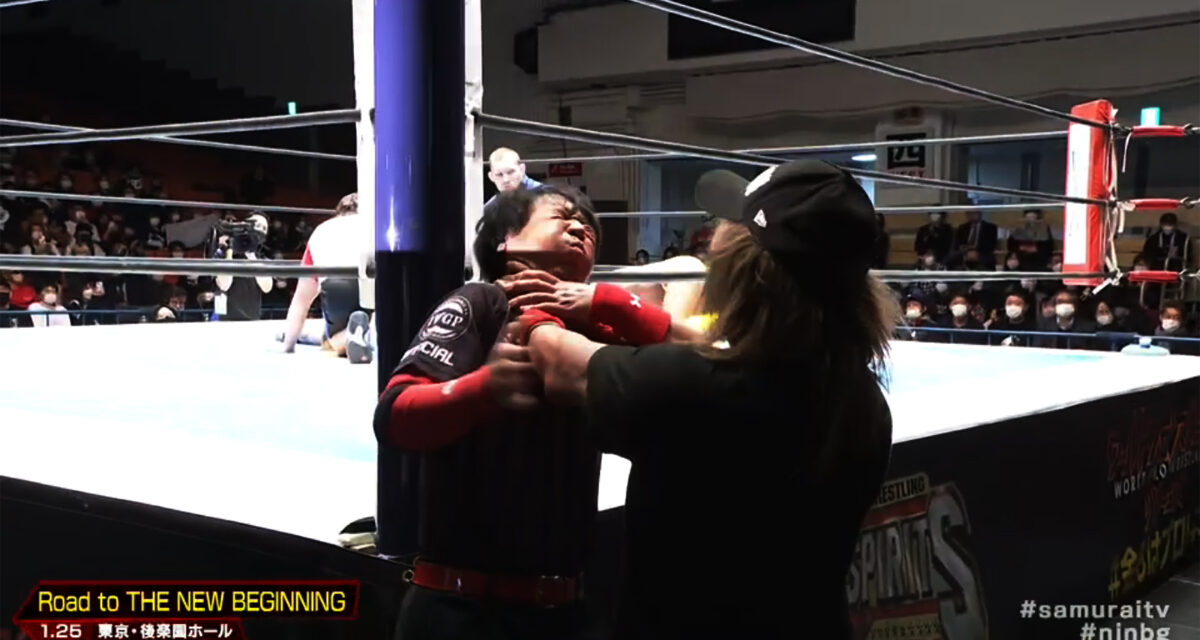 Blindsiding opponents was the order of the day as NJPW’s The New Beginning tour continued with a handful of matches featuring extracurricular activities.

The most devastating was Tetsuya Naito’s on his current rival upstart Shota Umino and his father Red Shoes. Los Ingobernables De Japon beat Shota Umino and Tomoaki Honma but that wasn’t enough for Naito. Once he had pinned Honma, Naito drop kicked Umino left leg. While Umino’s father Red Shoes looked on Natio kicked Umino in the “lower abdomen” and dropped him with a Destino. Naito rolled up Umino for a pin demanding Red Shoes make the count. Red Shoes refused so Sanada did so instead. As LIJ posed over Umino, Naito spit on a fallen Umino. 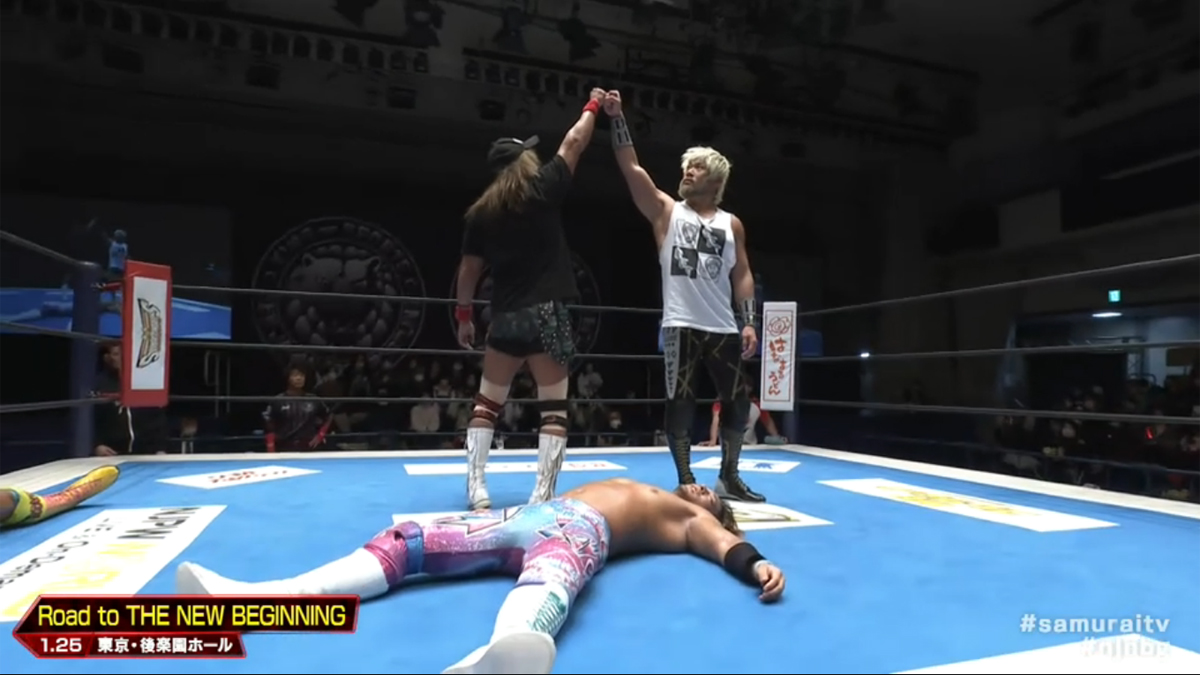 Naito continued his assault once Red Shoes held up LIJ’s hands in victory on the floor. Naito strangled Red Shoes against a steel post and then down to the arena floor. A Young Lion broke things up. Naito backed away then choked Red Shoes some more.

The blindside theme continued throughout the evening with:

At the end of the Be-Bop Tag Team (Toru Yano and Hiroshi Tanahashi) versus  BULLET CLUB (KENTA and Gedo) match, Kenta attacked Tanahashi with the ring bell hammer hitting him viciously in the head numerous times. He then laid in haymaker after haymaker. Kenta went to the floor and gave Yano some shots too before coming back into the ring and attacking Tanahashi again. 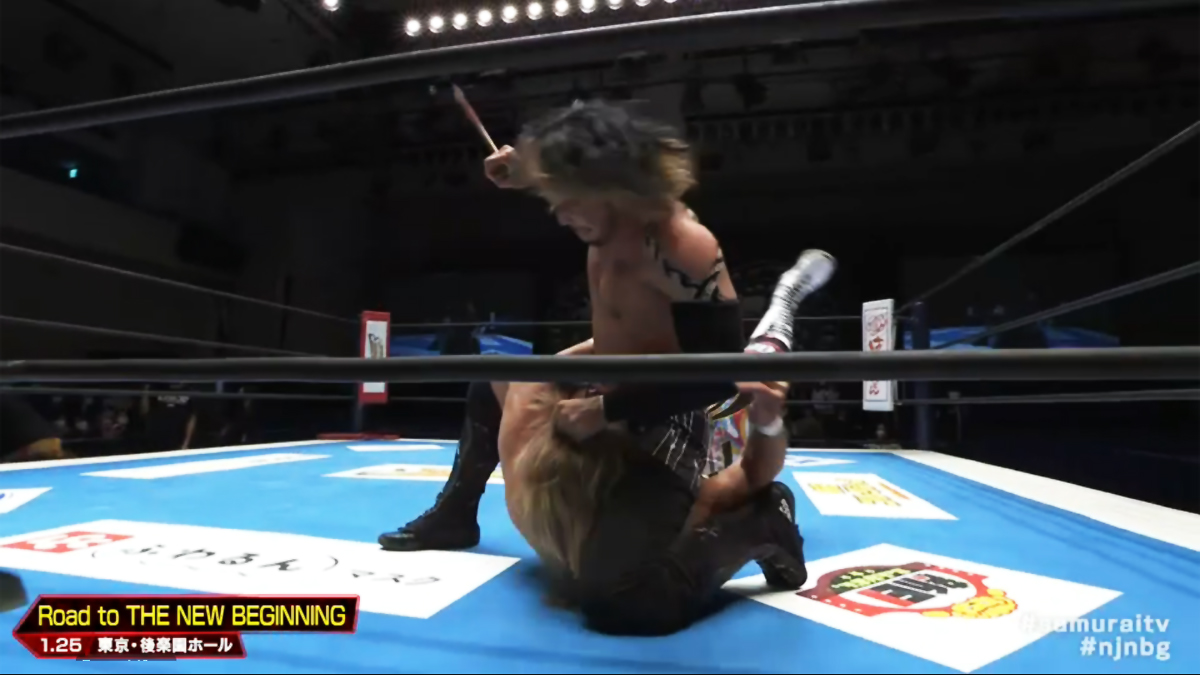 After TMDK beat Yuto Nakashima, YOSHI-HASHI, Tomohiro Ishii and Hirooki Goto, Ishii attacked TMDK as they were posing for photos. Nakashima, Hashi and Goto jumped into the fray sparking a huge brawl at ringside. Ishii wrapped Sabre Jr.’s arm around the ringside barricade trying to snap it off. The brawl was broken up and began again with bodies being thrown everywhere.

Once United Empire had beaten Just Two Guys (Taichi and Douki), Ospreay and Akira went to work on Taichi in a corner. After being thrown outside of the ring Taichi grabbed a steel chair but decided against furthering the hostilities, put it down, grabbed his microphone and left the ringside area.

Leube scores a two count with a leaping leg drop and a Boston Crab but Henare will not go down quietly. Henare gives Leube as spin kick to the head and pins him…just like that.

Kenta brings in a steel chair. The Ace trips up Kenta. Kenta falls, takes a header on the chair. When the official’s back is turned Yano punches Gedo from behind in the “lower abdomen”. He rolls him up for the pin.

Fujita has Nakashima in an arm bar submission. Sabre Jr. has Ishii in the same hold. Nakashima submits.

TJP leaps on Kanemaru on the floor and comes up clutching his knee. Taka submits to The Great-O-Khan. TJP is still favouring his knee and limping after the match.

Just Two Guys attack United Empire before the bell even rings. Ospreay and Taichi pair off and Douki and Akira pair off. Ospreay and Taichi have been scraping for weeks and weeks. They continue here with Taichi slamming Ospreay over and over into the ringside barricade. Douki hits an impressive Douki Bomb on Empire as they are dazed on the floor. Ospreay kicks out of Daybreak though. Ospreay pins Douki with a Hidden Blade.

Sanada gives Honma a back suplex and Naito flips over Honma for the sneaky roll-up and pin.