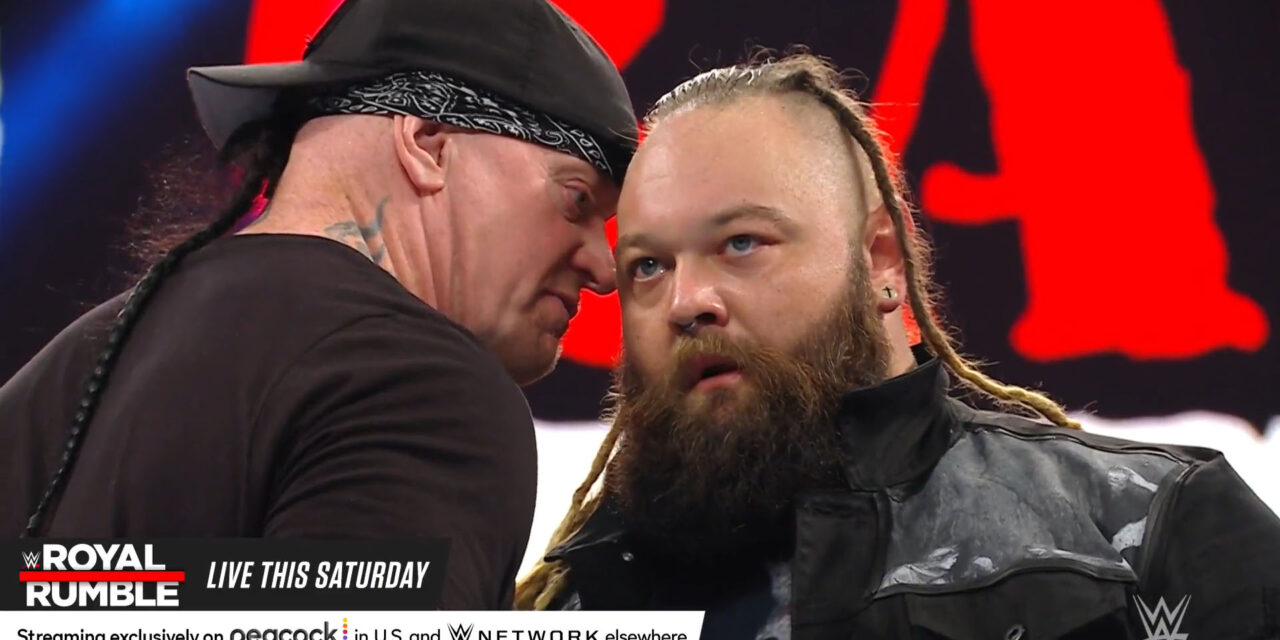 With the NFL playoffs no longer on Monday nights and football in the books, Raw has a good chance at striking a decent-sized rating tonight, particularly with some flashback appeal thanks to the 30th anniversary spectacular.

We kick things off with Hulk Hogan and his tagalong, Jimmy Hart. Hogan stumbles with a faulty mic to start, this isn’t a good sign. Hogan gets a new mic and a cheap pop from the Eagles to assumedly end his time tonight, likely the same for Hart.

We then go into an extended opening with the I’m Blue ripoff. It’s sad when creativity is reduced to lifting Blue Man Group. The highlight reel is the same run we’ve seen over and over, not just now but any time there’s a retro push. Noteworthy that Sasha Banks is part of the package.

First out from the current talents are The Bloodline. Roman and co get massive cheers from Philly. Everyone, including the Wise Man, has a lei. Everyone, that is except Shmuly (shout out to my MOT brother from another Ima for that one).

The Bloodline’s court is quickly in session. Sami chant rings through the former ROH stronghold as Roman asks Philly to acknowledge him. Surprisingly, they do, then they chant “ECDub”, because apparently they can’t let that go. Hey Philly, if Canada can stop chanting “You Screwed Bret”, you can let the memories of bingo hall blood be washed away too.

Heyman launches a verbal assault on Shmuly unlike anything I’ve seen in a long time. Zayn retorts just as strongly but ends by saying he has no defence. Reigns shows off his anger before calling on Solo to execute punishment. Before he can do so, Jey Uso of all people stops the Samoan Spike. Jey then shows a defence reel of what Sami has done for him and his brother, and the group as a whole. I’m not crying, you’re crying.

Roman rises from his seat and proclaims Sami to be not guilty, at least for now. Zayn is essentially suspended from the end of Raw until the Royal Rumble.

Aaand… Dom just sucked the life out of this show.

Damian Priest desperately needs Dijak to be called up so he has someone to renew his passion. He really feels like he’s dialing it in in this faction.

Usos are the faces and Jimmy is Ricky Morton. Match starts evenly until Dom is in the ring and then it’s Usos ruling the ring as they should. Unfortunately Priest is tagged in. Uso doesn’t get much offence in. This feels like it’s going to be a long match. Philly is near silent for this one.

Priest tries to turn up the volume with a couple high spots but it is for not. This match has nothing to it.

Usos start the Superkick Party and surprisingly it doesn’t get an AEDub chant from the defiant miscreants.

Balor interferes and is caught by the ref. Rather than, you know, getting his boys disqualified, Balor is merely tossed from the ringside. This sucks so… so much…

Uso Splash from Jimmy on Priest doesn’t get the duke, the match continues, and I die a little inside.

Out of nowhere, Jimmy Uso goes to the ringside and is coming up limp. Medics are called. No X so you know it’s a work. Adam Pearce rushes down and that the match and belts must be forfeited. Sami offers to step in, and it’s accepted.

Soon after, Zayn hits the Top Con Hilo to an explosion. Distraction from Ripley doesn’t get her tossed, in another BS moment, and Zayn avoids getting pinned. More Superkick party until Ripley comes into the ring, and DOES NOT GET EVICTED! what the bloody hell! Frog splash BS from Dom gets two before Zayn breaks up the pin.

Soon after, 1D gets the duke for The Usos. Thank the MOT’s lord.

Backstage, JBL and Baron Corbin run into The Godfather to gain entry into the poker tournament for tonight. Apparently Faarooq is the leader of the game. Damn, Ron Simmons hasn’t aged a bit.

We see a variety of current stars and legends at a variety of tables, then flash through a series of historic stills.

Back to the ring, LA Knight is out to preach. Dude he is getting over just as he deserved. He challenges any legend to come out and we hear the Undertaker’s gong go off before it transitions to the American Badass theme. Bikertaker is back! Oh, and Lesnar mark is in the audience too (same shirt from 11 years ago).

Knight cuts off the ballyhoo, cuts down ‘Taker and heads toward the back. Knight is so freaking good, it’s not even funny.

Suddenly the lights go out and Bray 3.0’s music plays. Suddenly he appears out of nowhere with the lamp. Taker stands in the ring as Bray approaches. Knight ducks into the ring and eats a choke for his trouble. Taker stares at Bray as he throttles Knight, then sends him into a Sister Abigail. The former WrestleMania foes stand in a show of respect as a Holy… somethingorother chant starts. The two cross paths, ‘Taker whispers something to Wyatt, and I guess officially passes the torch.

Another VERY well done segment to bookend the Dom crap.

Backstage, the poker continues with DDP winning a hand over American Alpha and Alundra Blayze.

The cage is coming down…

Before Becky can enter the cage, Kai-n-Sky attack. Bayley slams the door in Becky’s face as well.

All three enter the cage and lock it. The assault continues as Pearce tries to restore order (to no avail). He tries to use bolt cutters but takes way too long. Damage Control sits atop the cage with smiles all over their faces while Becky lays destroyed. If you’re going to bait and switch, this is how you do it.

Back from commercials more stills are shown, leading into DX coming out (minus a certain Daddy). I will laugh out loud if the “Oh, Scissor me Daddy” song is chanted by Philly.

Apparently subbing for Gunn is Kurt Angle. Hey, he’s been a member of The Shield so why not?

Before Triple H can tell everyone to suck it, Imperium comes out. Gunther challenges anyone in DX to step up and face him. The true DX members nominate Kurt Angle to fight, but he refuses. Seth Rollins then comes to the ring to accept the challenge, and is soon after joined by the Street Profits. Teddy Long comes out to make things official, playa.

Before the proceedings end, Kurt Angle reveals that he has a ref’s shirt.

Jerry Lawler joins Graves and Patrick at the announce table.

Vinci starts off for his side and gets victimized early before turning the tide with a wicked clothesline. Action continues hotly among these six very strong competitors. Even Steven action until we get Gunther and Rollins in the ring. This could be a headliner for years to come.

Rollins goes for a Springboard attack but EATS a chop. That was fierce.

Rollins is in the Morton spot coming out of the break. Eventually we get a schmoz going with Gunther squaring off momentarily with more chops. Powerbomb on Rollins gets two. Gunther tries the Powerbomb but Rollins flips out. Rollins gets the Superkick and an Angle Slam. All sorts of combos lead to the assisted Blockbuster. Rollins hits the Pedigree on Gunther, Sky High by Dawkins, Five Star Frog Splash by Ford, then a Stomp by Rollins on Vinci for the pin and win. Good match, too short. Could’ve cut out at least 5 minutes from the Dom match and given it here.

Backstage, the poker continues with Corbin and Ted DiBiase Sr. IRS then takes away their winnings as a tax claim. Faarooq then comes in with his catchphrase for kicks.

Back from break, Cathy Kelley talks with Bobby Lashley until MVP makes his presence felt. Lashley asks him and Omos to stay away.

Ric Flair is out next, and it’s a guarantee we’re going to get crying Ric since Charlotte is due out as well. Flair looks like he borrowed a suit from Don Cherry.

Charlotte Flair talks about how women’s wrestling has evolved. She lists off several names she faced, except for Becky, Bailey and Sasha. Bianca Belair, however, comes out. She yammers for a bit before Sonya Deville comes out and makes the case for the under-appreciated women like her.

Belair challenges Deville to face her in the ring.

Belair dominates early with some acrobatics and a nice single-leg dropkick. Grinding shoulder in the corner is a simple yet effective move. Deville looks more inked than the last time I saw her, but that may just be me.

Belair looks very impressive as always, and quite frankly Deville looks strong as well. She’s greatly improved over the last couple years while not getting enough credit.

Belair gets Deville on the outside and keeps her out until Deville gets a Thrust Kick to turn the tide.

Action’s back in the ring after the break as the even Stephanie match continues, at least until Belair gets the KoD out of nowhere. We definitely missed something during the commercial break. Dang it Dale.

Post match, Belair says she’s going to do much the same, and more, to Alexa Bliss this weekend.

We cut to the back and Alexa Bliss cuts a deep promo on the champ.

We get our latest Cody recovery tape. If we’re doing Raw 30th anniversary, we should use the WWE Desire theme from a couple decades back.

Back out to the ring we get Miz in the ring, complaining that he gets no respect. Quickly though, he gets turned around and eats a Stunner from Kevin Owens. Owens is still wearing the Jay Briscoe armband. He then cuts an empassioned promo on Reigns. Fantastic work as always from KO before he gives Miz a second Stunner.

Lashley dominates early, and does his unique outside-the-ring post run.

Lashley continues to dominate until an Eye rake. Theory gets a two count before heading out to get a chair. Theory gets a table but the time wasted gives Lashley the time to recover and take control. The back and forth continues as we head into another commercial break.

More heated action as the plunder comes out. Theory blasts Lashley with spray from a fire extinguisher. Back from another break, there’s even more plunder. More back and forth leads to both men being down after a table spot, leaving it open for Brock Lesnar to make his return. Lashley eats an F5, then Theory is F5’d onto Lashley. Huh.

Bizarre finish to the match and night for sure. Aside from the poker and DX tomfoolery, the legends were used very effectively. The pass-the-torch moment is going to be underrated in the longterm, sadly, but there was a lot to like about tonight’s ep.