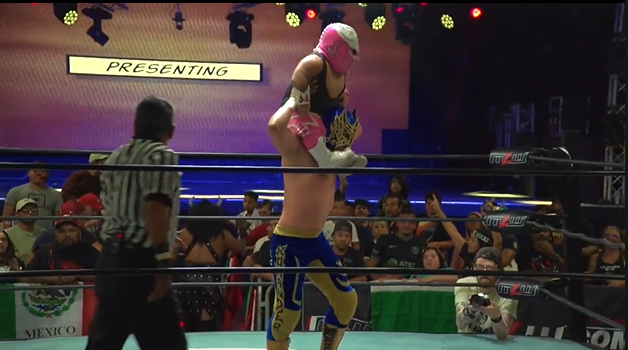 Alex Hammerstone decides to regal us with the requirements to being a pro wrestler: stamina, power and the ability to perform at weeks notice. To do this kind of sport, you have to be passionate about it to begin with, know the dangers of medical bills but also the benefits like doing what you love. Hammerstone is, I must say, a great example of a formidable wrestler.

He promotes the new chewable athlete tablet called Bluechew that can be delivered discreetly to your door in order to help boost you up like a champion. So if you’re looking for some of these magic gummy drops, visit BLUECHEW.com and use the promo code MLW to get your first month for free.

As Microman makes his entrance to the ring, Mister Saint Laurent appeases him by singing a welcoming tune to the pint seize Luchador. I was a bit confused as to why commentary thought his voice was “Majestic”. Ha!

Anyway, given the animosity Gino has for Microman, he wants him gone from MLW. I suspect that Micro has become a threat to the brand that Medina thinks it’s best to remove the biggest obstacle now before it has the chance to overflow the premises. Will he accomplish that twisted ambition? We’ll have to wait and see.

I have to say this before I forget, I don’t like Komander’s name. It starts with the letter K… why? What is this? The Kardashians? I’m all for uniqueness, I promise, but this feels odd in a way that isn’t intriguing. Just bizarre…

We start this match up with Mini Abismo Negro and Komander. There was a lot of tussling, to be honest as Negro flips Komander over his shoulders. They’ve been playing catch up, who can show the better moves.

Because Mini leaped out of the ring, Gino, who really wants Microman to fail, arrogantly jumps in to battle Komander by wrapping a grip around his neck. While that’s happening, Micro jokingly gets involved by smacking Medina on the back then retreats to his designated corner. This… tease goes on for a few minutes along with Laredo Kid’s assistance that you begin to wonder if this becomes the entire match.

Komander comes back into the fold with slingshot maneuver with his legs towards Medina while he was distracted by the other opponents. Ha! That doesn’t last long since Taurus abruptly charges in with a harsh headbutt to Komander.

Momentum was building up for Microman’s team, but that’s swiftly taken care of when Medina finally flattens the pint seize Luchador before ganging on him with a 3-on-1. Taurus uses the Figure 8 as Mini stretches him out.

Laredo Kid attempts to lend a hand to Microman as he slides back into the ring, unfortunately, Negro and Taurus spot him in time.

What came as a surprise to me, or rather a shock, was when I saw the referee taking advantage of the fact that Microman was put down by Medina, so he could heel kick him in the ribs. What the actual hell is going on? Laredo and Komander were taken out earlier, so Medina’s team could destroy Microman when he’s been isolated. This going on for a little bit.

Both Taurus and Abismo were about to throw Microman on his ass, but he manages to turn it around by flipping Medina outside. Microman lunges for a suicide dive, yet he gets caught mid-air by Medina and sat on the apron like a baby. No one sees that Laredo Kid was back on his feet as he takes the opening to dive onto Gino.

After drop kicking Negro and Taurus, Laredo ploughs onto the entire group on the main floor with fantastic agility.

Laredo’s luck ran out dry once Taurus got a hold of him. An impeccable back breaker was performed to knock Laredo’s lights out. Thankfully for him, Komander breaks the eventual cover their opponent was about to do. Komander drags Taurus into a stupendous Tornado DDT.

Mini Abismo plants a Cutter to Komander thinking this was it, yet Microman slides in to stop the count, which results in a kick to the jaw. Gino joins in as well to take Micro down, and when he momentarily does, the slow count from the official allows Microman to kick out. It was great that he remained in this match, but the painfully slow count was just weird on the referee’s part. Whaa—

I know he didn’t mean to, Taurus was going to spear Laredo Kid, yet he clashes into Gino instead while holding Microman above his shoulders. Microman perfectly lands on top for a cover that grants him the win.

Which means that we won’t see Medina for a while.

Breaking news, EJ Nduka has demanded more money for his title fight against Hammerstone resulting in a Last Man Standing match, yet that has been postponed. Terms will have to be renegotiated because of that input.

Following the war he went through, Mance is more than glad he won his match against Mads Krugger. And a good thing too. That match was hell itself orchestrated by the Devil.

If I’m being honest, I barely understood a word Fatu said, but I can only guess he was trying to place Willie Mack in check. Are you telling me you couldn’t do that and speak cohesively?

I think Alex Kane is becoming ever more deranged since he’s been holding the Opera Cup hostage. He instigated a bout between the British Bulldogs and the Boom-Aye Fight Club next week. Like he wanted. Also, The Great Khali sent them 88$, which I only reckon is to fund their club’s tournament. Hmm. Maybe that’s where the coins are coming from.

This is Willie Mack’s debut, and he will be facing the Samoan Werewolf Jacob Fatu. I heard they respect each other, so I wonder how this will go.

Oh, by the way, I just had a realization. The reason why the wrestlers’ theme songs are low on volume is because of the announcer standing in the ring. He has a loud ass voice. Damn…

Anyway, the bell hasn’t even rang when Fatu began slapping Mack in the corner. I guess Jacob wanted to get a head start. Willie retaliates with a few slaps of his own. It became a back and forth game between these two friends turned opponents.

Mack has amazing force as he swings Fatu using his legs. That angers the Samoan wolf, so he smacks Willie so hard behind the ear like he’s being punished. Exactly that.

Willie has the upper hand here with chops to Fatu’s chest leaving him whizzing for air and space. Jacob stands his ground by shoving Mack into the barricades then headbutts him.

Mack looked like the Undertaker when he rose up like that after Jacob slams himself against Willie’s shoulder while he laid on the mat. That woke him up. Ha! Ha!

Fatu went for the seated Senton, but misses hilariously when Mack dodges it to roll him up.

I didn’t mean to laugh so much, but when Jacob pierced his hands on Mack’s back, and I believe he shouted “Motherf*cker!”, I couldn’t contain my giggles. I wasn’t laughing at first until he swore. Ha!

On the other hand, Willie comes through with a Swingblade that basically took a lot of energy out of him because they both laid there on their spines.

The feeling speeds through Willie’s body as he follows that with a clothesline. Jacob puts his foot up in time to kick Willie in the jaw that causes him to wobble. Fatu charges again, but ends up getting caught with a Samoan Drop by Mack. Imagine that. This must be karma.

Both men are down but not for long. A kip up by Mack followed by the Macarena dance before plopping on Fatu’s abdomen for a failed cover.

Fatu quickly pulls out from a Stunner that hurts Mack’s back then Super Kicks him. Jacob performs a handspring Moonsault for a cover.

With an Exploder suplex into the turnbuckles, Jacob lands on his head and neck dramatically. Meanwhile, Mack attempts to capitalizes with a Cannonball.

Willie amazes us with a Coast-to-Coast Drop Kick, yet he might have injured himself in the process. He couldn’t support the 300 pounds of Fatu, his leg gave way. So, Jacob uses that to Super Kick Mack in the face then follows that with a Samoan Drop Kick then a Moonsault for a victory.

I can see it went poorly for Mack. What a shame.