New Flair documentary has several highlights for the Nature Boy 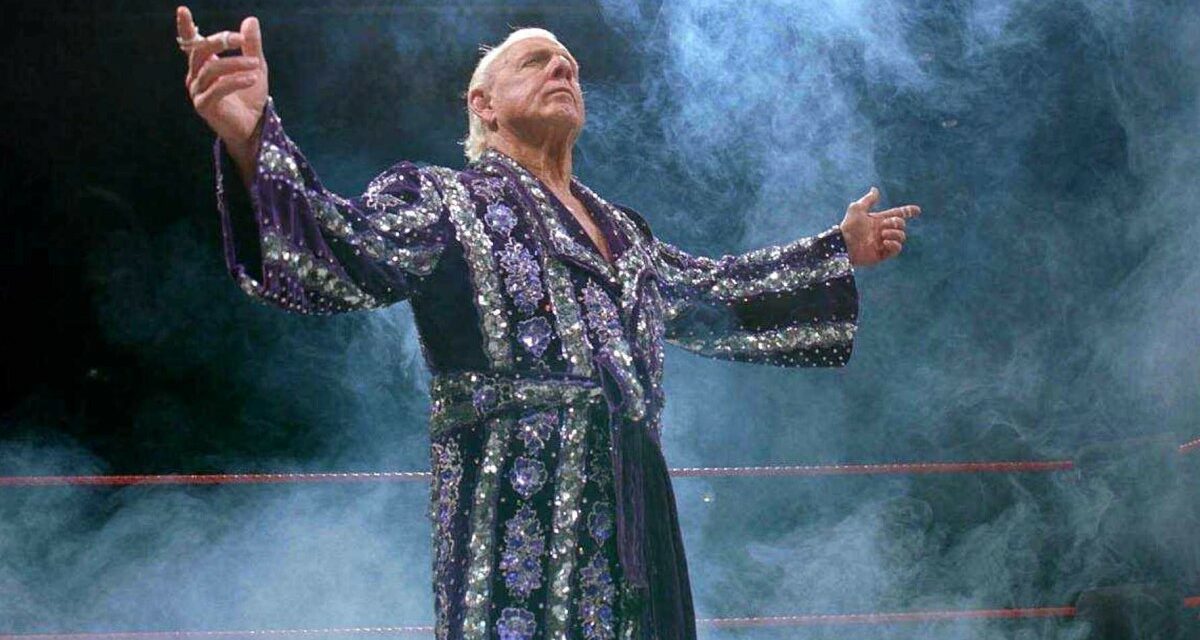 How is it that one of the most recognizable men in the sport of professional wrestling can surprise with new stories? The new documentary, Woooooo! Becoming Ric Flair, now available on NBC’s Peacock streaming service, races through the Nature Boys’ life and yes, provides a few fresh nuggets along the way.

Now, Flair is one of the most well-covered wrestlers in the history of the televised industry. Almost nothing is uncharted territory, but the Tom Rinaldi-hosted sit down gets right into it. A FOX Sports reporter, Rinaldi asks Flair about his birth name. For most fans, Flair was known to be born “Richard Fliehr” in 1949. As Flair details, he was born Fred Phillips to a couple who gave him to an orphanage. Architect Luther and nurse Olive Phillips handed him over to a Memphis, Tennessee, home that was later busted for selling babies on the black market. Flair doesn’t care if his adoption was legit or not, as the parents who raised him were exemplary in his eyes. “There weren’t two finer people,” Flair recalls of the parents who raised and supported him well into adulthood.

It’s understandable, but sad that a half-brother tried to reach out to Flair’s wife, Wendy, just a few years ago to just say hello, and was rebuffed. That’s the “Ric Flair talking”; Richard Fliehr’s opinion isn’t allowed. He was happily an only child and doesn’t care to be bothered.

And that’s just the first few minutes of this expertly-crafted nearly two-hour documentary. Sure, a lot of the same talking heads are trotted out, most notably Triple H, Shawn Michaels and the omnipresent Bruce Prichard. Sportscaster Stephen A. Smith and Hulk Hogan make poignant comments, and Diamond Dallas Page and musician Post Malone are effective.

Flair’s early life is mentioned, and how his love of alcoholic beverages started at 15. A rambunctious child, Ric skated through high school and couldn’t really hack college.

That was all told in about 12 minutes. A lot has been covered, but most fans are here to see wrestling stories. Ken Patera was the first professional grappler Flair met and they quickly became roommates and trained with Verne Gagne. Unfortunately, Patera wasn’t interviewed for this glossy feature.

Keith Elliott Greenberg, who co-authored Ric Flair’s To Be The Man, autobiography was on to provide some great details about the 1975 plane crash that severely injured Flair, paralyzed Johnny Valentine, and put the pilot in a coma. [A quick note about the book. Former WCW announcer Mark Madden, who edited the 2004 tome, had a very public falling out with Flair this past summer after launching a podcast. Madden was not interviewed for the feature.]

Flair was never supposed to wrestle again. He was back in six months. The story, and another about Flair nearly being hit by lightning, was a highlight of the documentary. I dare say most don’t know about the “lightning” incident.

The pacing of the documentary was good. Flair mentions being married four times, but Wikipedia puts the number at five. Only three are mentioned. Current wife Wendy Barlow does a great job letting fans “in” the world of Ric behind the Gorilla position, her first real on-the-record interview about their time together.

When Flair talks about 1985, the formation of the Four Horsemen and the lavish lifestyle, he breaks out in the most genuine, hearty laugh of the 16-time champ’s televised history when he talks about loving women.

Ashley “Charlotte” Flair is featured a good bit in the second half of the flick, as is her sister Megan, as there’s a great change from his in-ring career, to that of being a father and family man, although his son David is barely mentioned and wasn’t interviewed.

The names Ricky Steamboat, Dusty Rhodes and Hulk Hogan – three of Flair’s most important rivalries – are mere mentions. And that’s okay. Some context about the NWA, WWF, WCW and back to WWF is fleshed out, but all of Flair’s most fervent fans already know every detail. Sting and Lex Luger are featured, but the tension between Flair and Eric Bischoff is still palatable. They do not like one another.

Much of the last half hour is dominated by the death of Reid Flair and how Ric did his best to drink himself to death. In a world of shoot videos and low-budget documentaries, this WWE exclusive (WWE executive Kevin Dunn was one of the three producers) used the weight of its empire to make this excellent.

The documentary began with Flair – in a $6,000 custom-made suit – sitting in a chair in a beautiful home, and it ends the same way. Rinaldi asks Flair to reflect on his life and legacy. It’s a tidy summation of a legendary sports figure. It’s a must-see for fans of the “Nature Boy.”