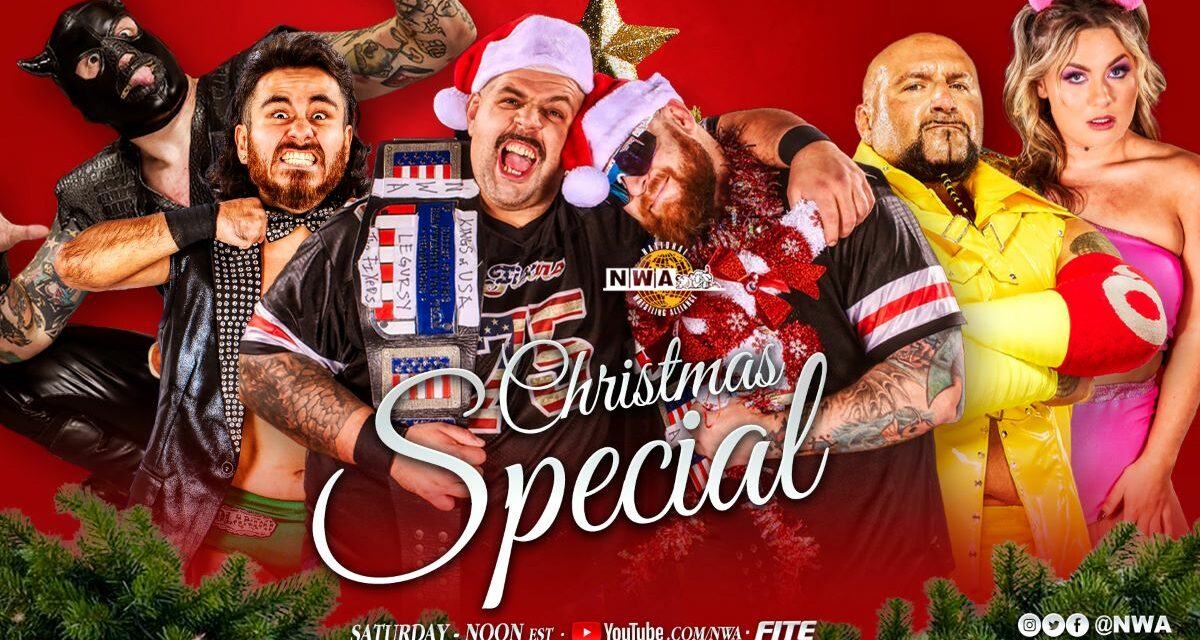 Happy Holidays as NWA USA gets in the spirit of Christmas with some matches and maybe a hint of mistletoe. So rip open the presents for this special episode as  Kyle Davis, Joe Galli, and Velvet Sky join us,  and they’re having a “sober Christmas (wink wink)” to avoid what happened last year. and we head to the ring for the First Match of the night… 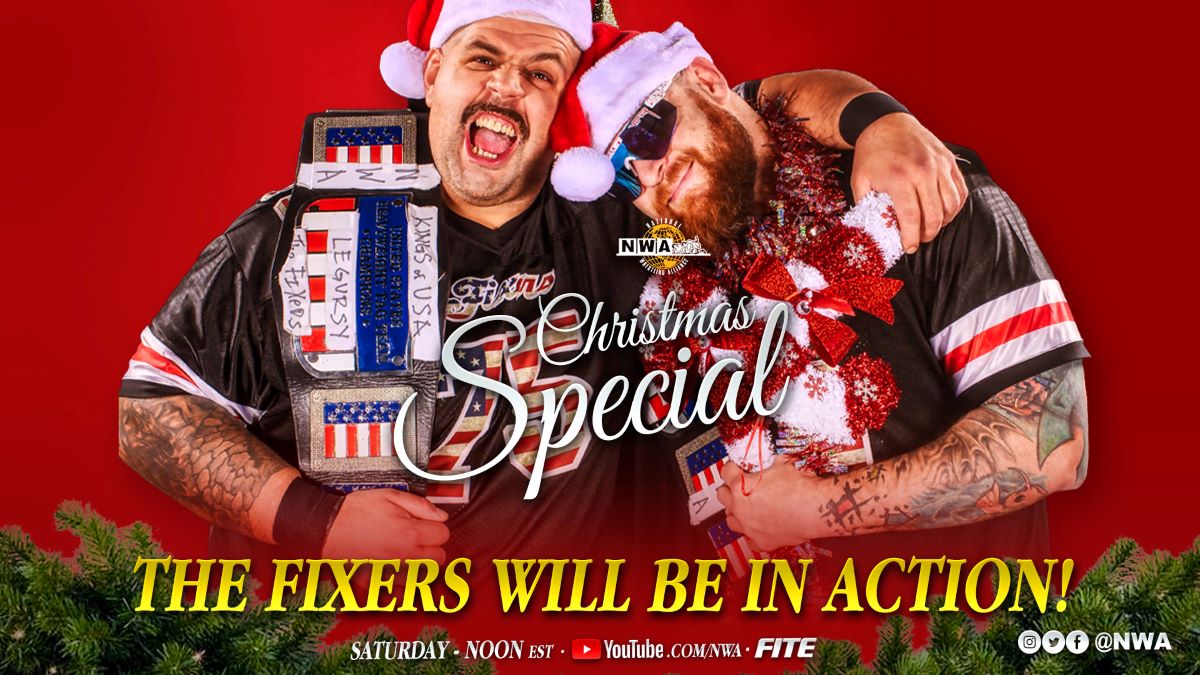 The Fixers vs. Alex Caytal and Shepard Lutz

In the Spirit of the Holidays, allow me to offer this Christmas Rhyme of the Ring™:

‘Twas the night before Christmas, and all through the ring

Legursky pelted the jobbers with a Nerf gun thing.

Bradley and Legursky tore through them, and it was such a sight

There was no chance Lutz and Caytal would ever see daylight.

They finished the match will a double chokeslam and their lights were out.

Neither opponent stirred afterward.  Not even a shout.

And it’s important to mention, in this time of Yule,

Merry Christmas everyone, because FIXERS RULE! 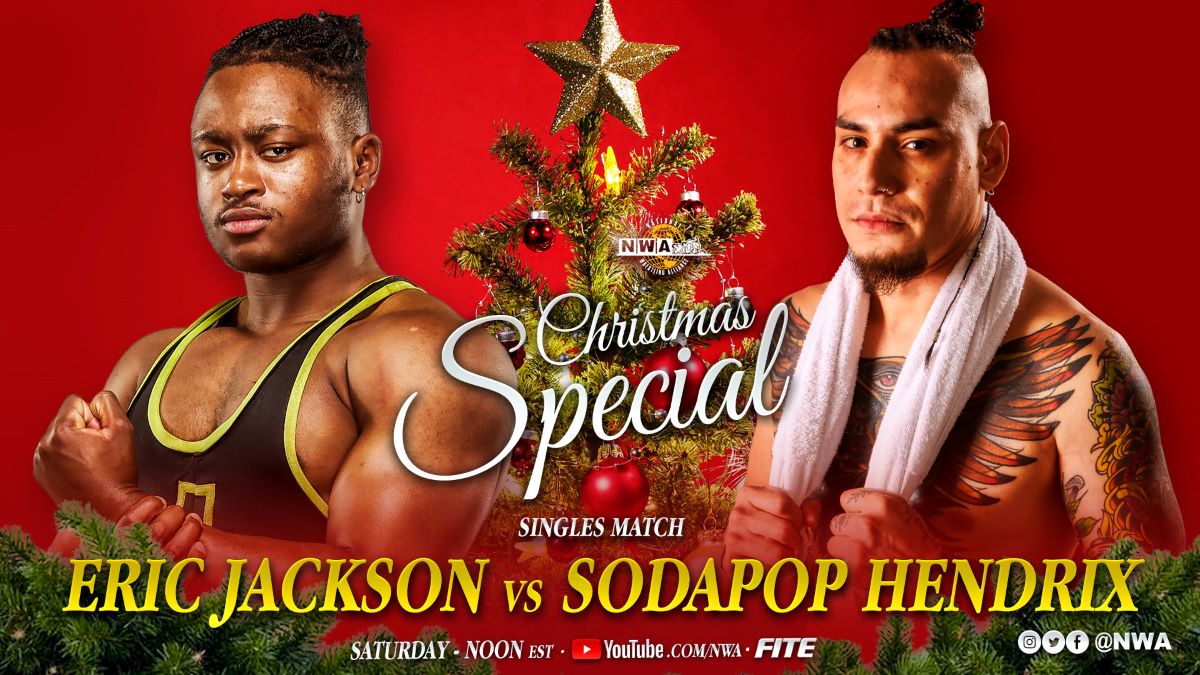 This looks to be a good junior heavyweight matchup, and the fans are solidly behind Jackson, and he’s able to overtake Hendrix but the Carbonation Sensation is no slouch either.  There’s a succession of near falls between the men, but Hendrix nails Jackson with a kick to cover for a two count.  Jackson comes back and slams Hendrix for a two count, and then tries a flip for a pin but Hendrix reverses and stacks him up for another two count.  Jackson sends him in the corner and mounts with punches, but Hendrix gets out and nails an avalanche Russian Legsweep.  Both men jockey for position, but Jackson manages to deliver a high German suplex with a bridge for the pin and the win.

Your Winner via Pinfall:  Eric Jackson

The Miserably Faithful are out, and Father James Mitchell has this to say for the holidays:

“Christmas.  A  formerly noble, ancient pagan holiday, celebrating the winter solstice, which has been rebranded and co-opted by your corporate overlords to sell you useless trinkets and greeting cards. The only thing I like about Christmas is it has ironically become a celebration of the deadly sin of greed. So, enjoy your winter solstice all. May all of your stains be large ones.”

Mostly, I like this so I’ll use this as my greeting for my atheist friends.  Thank you, Satan Claus!

But here’s the next match… 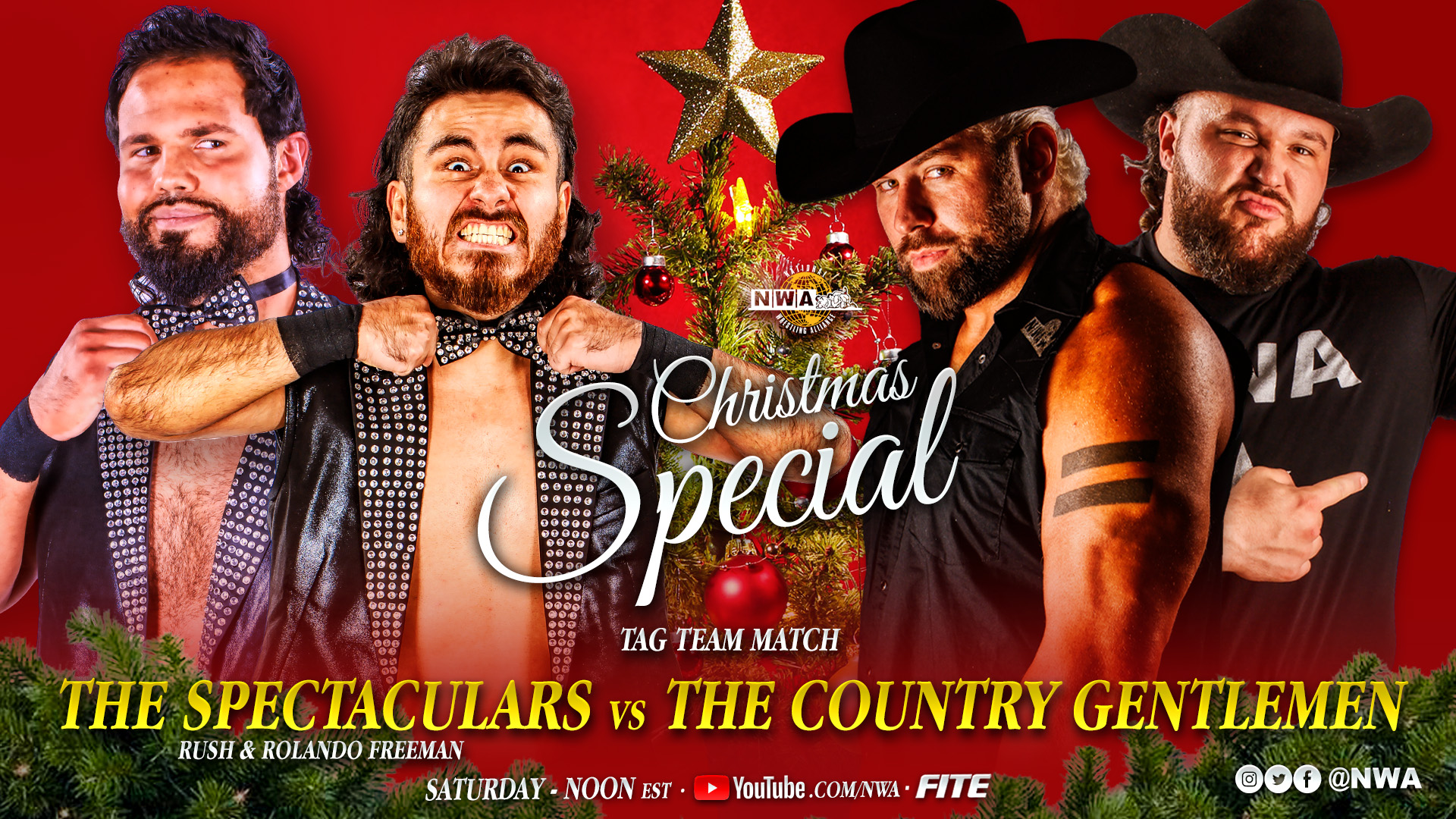 Looks like the Freeman brother will go at it without Brady Pierce in attendance.  Rush starts off against Cazana and then he gets him into his corner where cousin Andrews takes over.  But Rush manages a side headlock takedown and then arm drags to the Adorable One, and then Rolando and he strut their stuff for the fans’ delight. Andrews rushes but Rush lands a toe drop and Rolando nails a senton.  Then Rush uses his brother to slam him onto Andrews to cover for another two count.

The Spectaculars are playing and having fun until Cazana throws out Rush and he and Andrews tee off on Rolando. The Biggest Brother tries to fend off the Country Gentlemen, off but Andrews tosses Rolando halfway across the ring.  Cazana tries to choke him out,  but Rolando escapes and gets a hot tag to Rush, who because a Spectacular tornado in the ring.  Using his brother as a weapon again, Rush lifts him into a  military press and tosses him at The Country Gentlemen and now they dance again.  The Gentleman have had enough, and Cazana tosses Rolando out of the ring and they deliver to Rush a clothesline/spinebuster combo for the pin and the win.

Danny Dealz and Candy come out and Dealz is in shilling mode as he tells fans to buy stuff from NWA’s Merch Shop and wishes everyone a Merry Christmas (except for Madusa, because she gets nothing).

Next, Kerry and Ricky Morton wish everyone a Merry Christmas and promise big things in 2023.

Now for interesting things for the holidays, here’s… 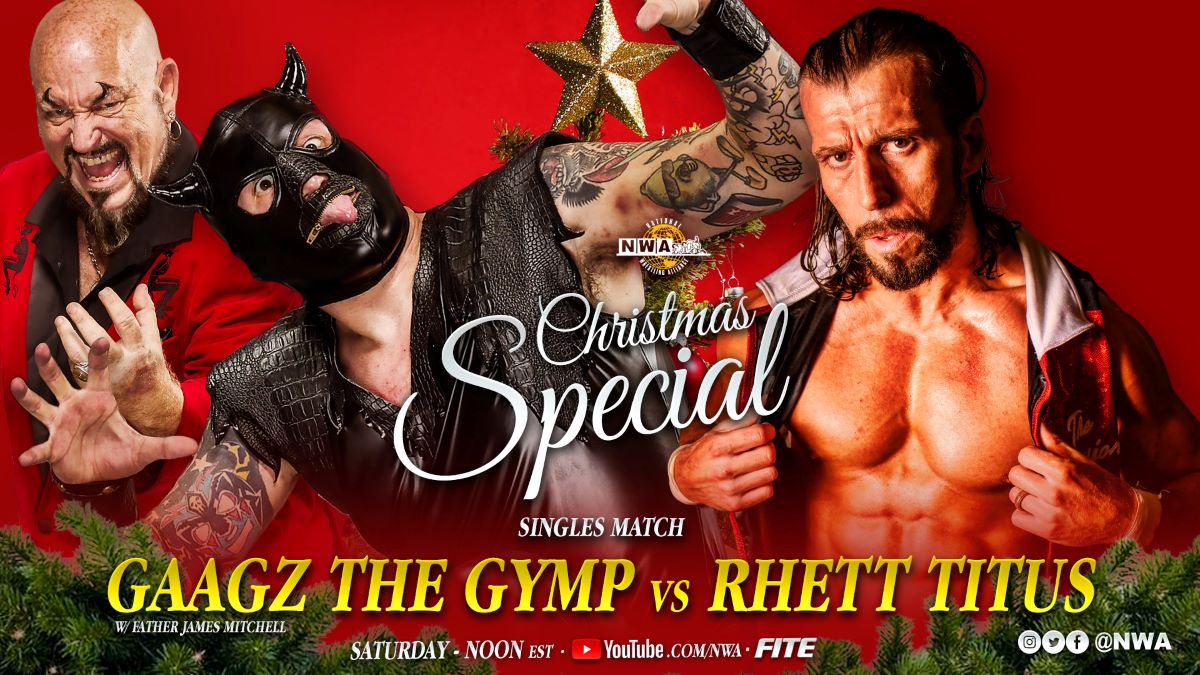 Gaagz the Gymp (with The Sinister Minister) vs Rhett Titus

Gymp-a-Mania™ is running wild tonight, and Titus offers a hand for the Code of Honor, and Gymp sniffs it. Titus tries to lock up but Gymp is a very unorthodox fighter. He gets Gymp in a headlock and then he spanks Titus until he releases the hold.  Pretty soon, Titus is in the driver’s seat but Gymp (or Double G, as Galli and Sky are told that is how he likes to be referred) headbutts him in the sternum with his horned mask.  Titus comes back with a hip toss that launches Gymp from halfway across the ring, but his unorthodox style still stymies The Professional.  Gymp charges again for a headbutt and now Titus catches him and hits a backbreaker.  He then whips him hard from pillar to pillar, and then Titus rams Gymp’s head into the top turnbuckle, then nails him with a knee and a suplex.  In the corner, Titus lands with a boot to the Gymp.  He goes again, but Mitchell pushes Gymp out of the way, and Titus catches the top rope with his leg.  As Gymp unzips his mask, Titus is taken aback…and then nails a standing dropkick and follows with a slingshot belly-to-belly suplex to get the win.

Santa Claus is here with a message for the NWA fans: He knows what list we’re on. Those of us who were good are okay. The rest of us are boned, essentially.

(Note to my Lawyer:  Ed Brass, if you’re reading this, is there a writ of Habeus Corpus that can stop the fat man from denying me gifts?  The Naughty list is rigged, I tells ya!)

Galli and company have Austin Idol now and they start by exchanging gifts.  Sky gave a Netflix subscription for Idol (even though technology might not be his bag because he’s, well…old).  Idol gives Davis a digital exercise program because he’s concerned about his weight. Davis remembers Galli last year when he got a tad snockered with the “holiday punch” and gives him a whiskey of the month club.

Finally, Galli gives a $100 gift card to Velvet Sky to shop at “Bloomers.net” and now it seriously gets weird between the co-workers.  Good luck explaining it to the fiancee, Galli. 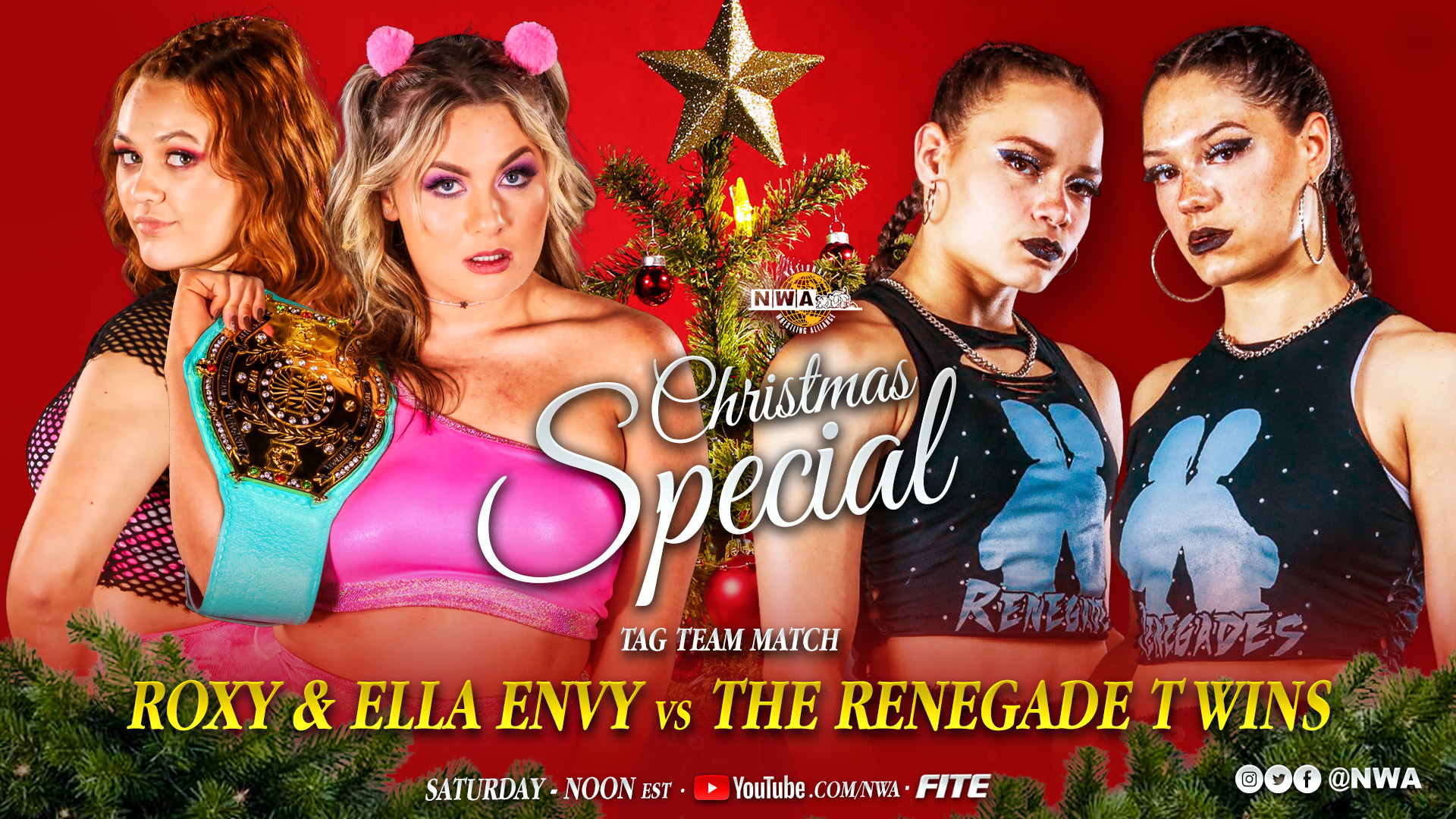 This is the debut of Robin and Charlette Renegade in the NWA, and Envy gives the bad mouth to Robin.  The Renegade replies, “Aren’t you the most famous jobber here?”  Whoa, sick burn!

Envy is upset by the disrespect, tags in Roxy and then Robin dropkicks her.  Now she and Charlette double-team Roxy to cover for a two count.  Envy distracts and that leads to a superkick by Roxy to Robin. Envy tags in for a cover of two, and then they isolate in corner and she is a Renegade in Peril.  Robin fights back and goes for a boot that Roxy catches, and that leads to an enzugiri.  Robin gets the hot tag, and Charlette is a Renegade en Fuego.  She nails Roxy with a fisherman’s suplex to cover, but Envy breaks the count.  As the ref tries to restore order, Envy clips Charlette from behind with the NWA Women’s tag belt, and then covers for the tainted win.

Your Winner via Pinfall:  Ella Envy and Roxy

Galli and Davis are now with the boss,  William Patrick Corgan, and he notices his employees have “high spirits”, if you will.  Strangely, Rob Van Dam was nowhere to be seen.  In any case, Corgan thanks the NWA fans for their support for the last five years and promises in 2023 there will be more live events and surprises around the corner while keeping in the spirit of the legacy and tradition of the NWA.

Now it’s time for the Main Event, and it’s a big match between… 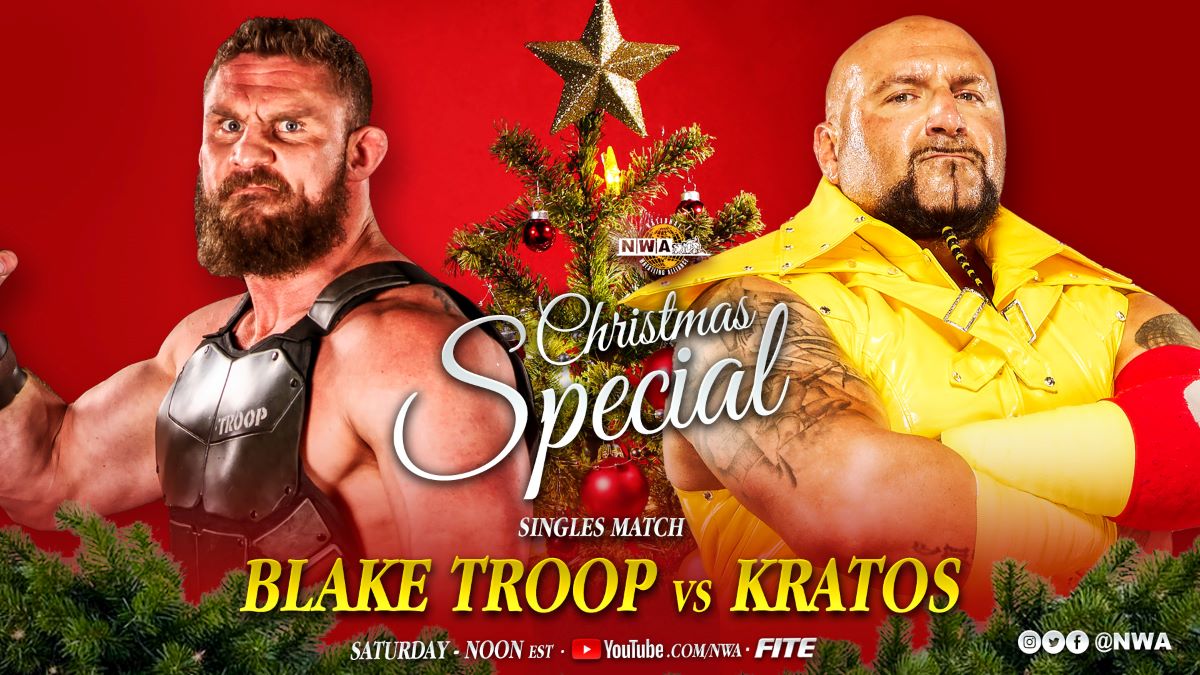 Galli notes this is the first time we’ve seen Troop since the UWN Primetime Live segments of a few years ago, and it’s also notable that Chris Silvio, Esquire signed him as a major acquisition.  As the bell rings, Troop goes for a quick takedown but Kratos evades and gets the shooter in a front facelock.  He escapes and then he trips up Kratos and goes for mounted punches, and as Troop showboats that gives time for The Most Feared to dish out a series of hip tosses.  Troop lands a European uppercut to Kratos that barely fazes the big man, and then they trade blows.  Troop is rocked and Kratos mounts him with some ground and pound of his own and hits a vertical suplex for a cover of two.

Kratos rushes at Troop, but he catches him with a scoop and a slam, and the Bulletproof covers for a two count.  Troop picks apart the Most Feared with MMA knees and mounts again with punches until Silvio tells him to hold off so he won’t be disqualified.  He lands another knee to Kratos and Troop claims lights out for one, two…nope, not yet.  Troop switches to a guillotine choke submission, and Kratos is fading. The ref is there and drops his hand twice, but not a third time as Kratos gets his second wind and deadlifts Troop.  He attempts a suplex but Troop escapes, and he goes for a splash that misses.  Kratos fires back with a clothesline for a pin.  Then he lands an elbow in the corner and goes for a corner suplex but Silvio grabs Kratos’ leg. The ref is distracted and deals with Silvio, and during that time Troop uses the opportunity to nail Kratos with a low blow and a gutwrench suplex to a pin, but Kratos’ foot is under the ropes to stop the ref count.  Troop is getting hot, and Kratos comes back and hits a pop-up slam to a high knee on Troop and he out for the one, two, and three.

Your Winner via Pinfall:  Kratos

Davis and Galli are still feeling the holidays. The doorbell rings and the NWA Heavyweight champion Tyrus and BLK Jeez come over. The champ offers happy holidays, happy Kwanzaa, and a Happy Hanukkah to the NWA fans as the show rolls to the credits.

It’s the holidays, folks.  Remember to have fun as the NWA did with this special.

Until then See ya next Saturday for New Year’s Eve!