AEW Rampage has a Holiday Bash 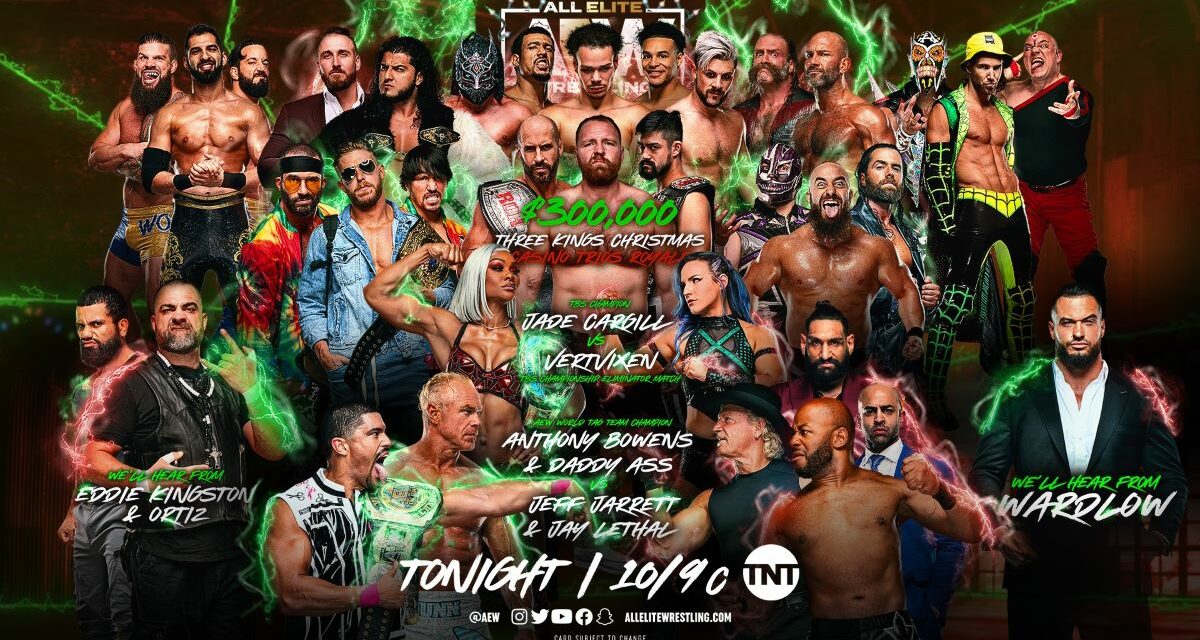 It’s Friday Night, and you know what that means?  No, it’s not Christmas time…yet (That’s Saturday).  It’s time for AEW Rampage, and not only do we have a trios royale, and the feud between The Acclaimed and Jay Lethal and company goes another level in the main event.  But sip on your eggnog (y’know, the good one.  The one that has extra “spices” because THAT is good eggnog), and let’s get to the action.

From the Freemont Coliseum in San Antonio, TX.  Excalibur, Tony Schiavone, Chris Jerico, and Jim Ross have the call, and we have a…

The teams that were already in the ring were La Faccion Ingobernable (Rush, Dralistico, and Preston Vance), Best Friends (Orange Cassidy, Beretta, and Chuck Taylor), Kip Sabian, The Butcher and The Blade, and already Best Friends know you Got to Give The People What They Want© early in the match.  Excalibur notes that over-the-top elimination rules are in effect and that all three members of any team must be eliminated before there is a clear winner, and as soon as he lays that out, Taylor is eliminated, and then that brings out the Blackpool Combat Club of Claudio Castagnoli, Jon Moxley, and Wheeler Yuta.

Everyone is brawling and soon The Dark Order come out of remaining members Alex Reynolds, John Silver, and Evil Uno, and they all focus on Vance and start beating the holy hell out of him for his betrayal.  Cassidy launches himself with a crossbody that is caught by Castagnoli, Uno, and Reynolds, and they toss him overhead and he lands on his feet.

Before stuffing his hands in his pockets, Blade blindsides him, and during Picture in Picture, it’s still chaos until Cassidy tosses Blade over the top rope, then Sabian tosses Cassidy, and Beretta tosses Sabian in rapid succession. Cassidy and Sabian brawl up the ramp to continue their feud.  Next is the SAP, consisting of Dr. Luther, Serpentico, and Angelico (Huh!  He’s still around?  Well, go figure!) come to the ring, but Beretta takes out Angelico right away.  Then Silver gets rid of Dralistico, and Rush dumps him over the top as well.  Mox nails a cutter to Uno and he dumps unceremoniously over the top rope.  Uno hangs on, but Mox dropkicks his legs to eliminate him.  Castagnoli does one better by eliminating Luther.  The next team to come out is Ari Davairi, Tony Nese, and Josh woods, and Mark Sterling comes out on the mic telling about an obscure law in Texas that it is illegal to milk another man’s cow.  As I researched the cow law in the Texas books, Sterling then hits the punchline that his guys won’t milk any of the “cow wives” in attendance.

Berrett goes under the ropes to attack, and all three gang up on him and send him hard into the guardrails.  Meanwhile, Yuta rains hammer and tong elbows to eliminate Reynolds and then goes to Rush, who suplexes him into the corner, follows with the Bulls Horns and eliminates him.  Vance hits a  lariat to Serpentico and he is tossed out of the ring.  AR Fox and Top Flight are the last team to come out, and they dropkick Beretta in the corner, and Top Flight launch Beretta to Fox for a cutter.  Now Castagnoli sends Davairi over the top but catches himself before the Swiss Superman boots him off.  Then he sends Vance over top and Mox nails him with a boot that gets him off the mat.  Dante sends Nese over the top, but The Premier Athlete stun guns him on the top rope as Woods helps out but then he gets eliminated. Nese attempts with a springboard and Darius pushes him off and nails the strike on Woods, Daivari, and Sterling down below.

Now Beretta piledrives Butcher on the ring apron and he’s out, but Rush hits a dropkick, and all of Best Friends have been eliminated.  Rush and Castagnoli have a staredown and it’s a chop/uppercut moment.  Now Castagnoli and Rush battle it out on the ring apron, and a huge European uppercut knocks off Rush to eliminate La Faccion.  Fox is sent over the top by Mox, and he attempts a springboard before Mox elbows him off for good.  Now Top Flight and Castagnoli/Mox of Blackpool are left and they brawl, but Page rushes in to attack Mox once again, and its pandemonium as security tries to break up the fight, but Dante dropkicks Mox amidst the confusion, and even though he was eliminated, Mox goes back in and axehandle smashes everyone.  Castagnoli is left and he’s able to take the fight to Top Flight by himself. He has power but Top Flight utilizes their numbers and speed to great effect.  Dante leaps onto Castagnoli, but can’t get a huracanrana because of his core strength.  Darius swings him back up and like a pendulum Dante maneuvers him to the ropes and then dumps him over the top to win.

They get handed the briefcase of cash and it looks like someone’s Christmas shopping.

Eddie Kingston and Ortiz came out for a promo. They said that they sent a contract to House of Black, but they never responded.  Kingston has zero effs to give as is, and he says, “Do that creepy crap and come out!”

Whoa, not sure this is a good idea #AEWRampage: #HolidayBash pic.twitter.com/EqVywUxkpO

A video of Malakai Black, Brody King, and Buddy Matthews appears on the ‘Tron, and Black plays mind games with Kingston, suggesting those close to him (alluding to Ortiz) may not be as loyal as he thinks.  As the lights go back up, Ortiz and Kingston look at each other questioning everything going on.  Kingston’s skeptical, but then he and Ortiz fist bump, but the vibes are all ain’t good in the ‘hood.

Renee Paquette is backstage with Sammy Guevara and Danny Garcia of the Jericho Appreciation Society. Regarding Jericho’s edict that both men need to team up, Garcia ain’t happy with that, but he’s a professional even though he doesn’t like anything about Guevara from his hair to the way he dresses (which I agree because, c’mon…”Vlog Crew?!”).  Guevara calls him a professional tightass and then says he needs a hug.  Guevara embraces Garcia, who looks like he’s in the most uncomfortable bear hug ever with a man who hasn’t used mouthwash, and tells him they’re a family and will do great things together.  Garcia is just not feeling it.

And now for something familiar, here’s…

Please note, I think Vert Vixen has a great future.  But her win is not coming tonight and I know how this will play out, so here’s a Haiku in Review™:

Your Winner via Pinfall:  Jade Cargill

Ruby Soho gives a promo on her beating Tay Conti a few weeks ago to put that feud behind them, but the moment was spoiled by Anna Jay beating her afterward. She knows the odds are against her, and that’s why on AEW Dynamite next week she will get a tag partner to even the odds in Willow Nightingale as part of the New Year’s Smash event.

We are absolutely HERE for this team up 🙌 #AEWRampage: #HolidayBash pic.twitter.com/HCQ9sZr4Zn

Wardlow also promises that Samoa Joe will know Mayhem is coming when he reclaims his title.

Now Mark Henry is backstage for the Final Words before the match.  Dutt says took out Max Caster last week, proving they are better musicians and better wrestlers. Bowens promises Jarrett that they will beat his geriatric Kid Rock ass down and everyone loves The Acclaimed.

Well, that’s been enough talk, because it’s time for the Main Event, and it’s… 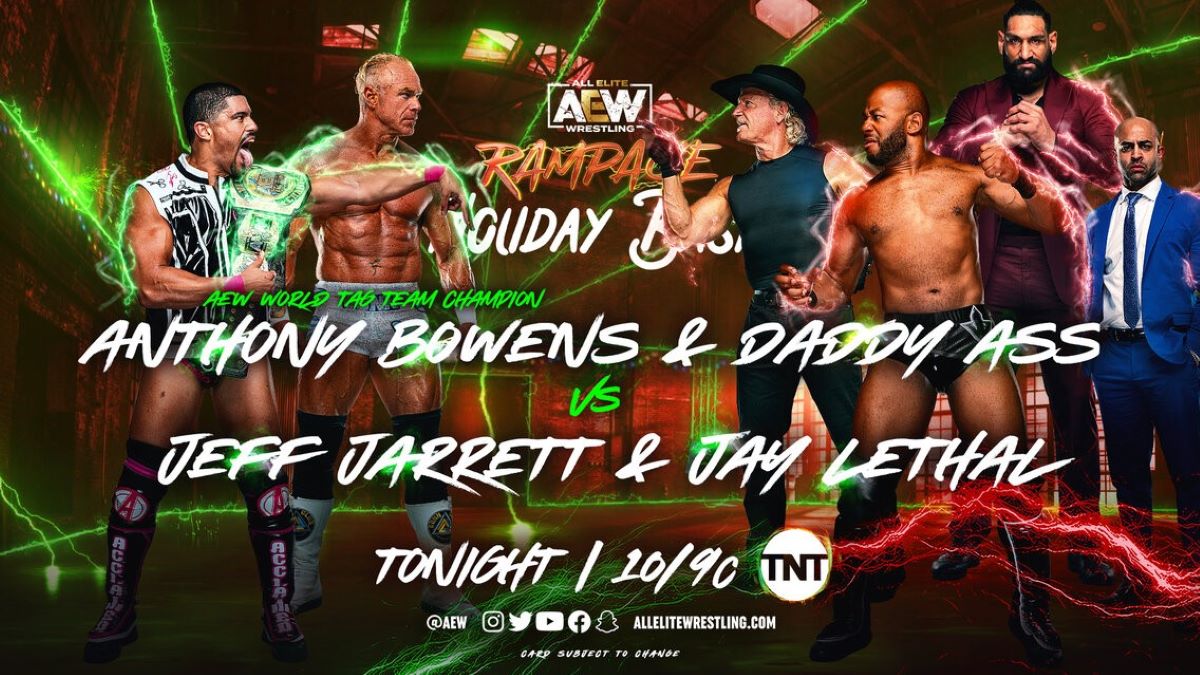 Lethal and Bowens come out swinging at the bell and an elevated Fameasser to the back of Lethal’s neck stuns him.  Now a Tag to Gunn and Jarrett is also in, but a quick thumb to the eye gives Double J the advantage and he takes over and struts his stuff, but Gunn comes back and goes on the offensive and nails a jackhammer for a two count.  Tag back to Lethal who goes up top with an axe handle smash, but Gunn catches him in the gut midair.  Bowens is in and he and Gunn double team and land a double scissors elbow drop to Lethal.  Lethal sends Bowens to the ropes, and Jarrett catches him with a knee to his back on the outside.  Bowens is distracted, and that allows Lethal to dropkick him in the back.  Bowens rolls out, but Jarrett connects with a clothesline on the outside, and Lethal picks apart Bowens during Picture in Picture, and Bowens is an Acclaimed in Peril as Lethal and Jarrett display great tag chemistry.  There’s a snap suplex by Lethal and he nails the Lethal Combination to cover for two.  Tag back to Jarrett and Bowens fights off his attacks and lands a desperation superkick. He crawls to his corner, and a hot tag to Gunn makes him a Daddy Ass en Fuego (and it’s another sentence I never thought I’d write).  As he cleans house, Guinn gets Lethal in a powerbomb position.  Singh comes over the ropes and Gunn sends him out on a rail.  He delivers the One and Only cobra clutch slam to Lethal to cover, but Jarrett dives at the last second to break the count.  As the ref tries to restore order, Dutt comes in with a low blow and Lethal pinned Gunn with the Lethal Injection for the one, two, and three.

Your Winner via Pinfall:  Jay Lethal and Jeff Jarrett

Things don’t look good for The Acclaimed as Lethal, Jarrett, Dutt, and Singh have their hands raised in victory as the show fades to black.

I would have reversed the order of the matches and made the Battle Royale the last match, but…What the hell?!  It’s the holidays, and there’s nothing like Seasons Beatings.

In any case, thanks to Slam! staffer Boris for covering me last week, and we’ll see you in seven!