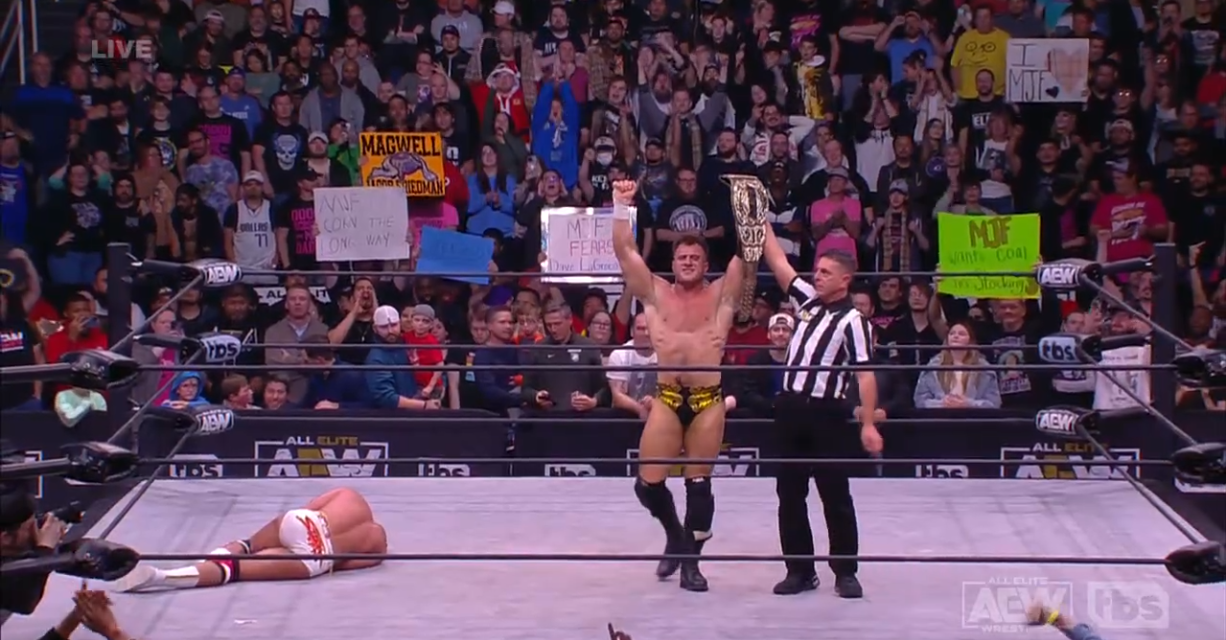 Winter is coming; more like winter is here in the Northeast! All meteorology jokes aside, tonight is one of AEW annual branded Dynamites. Ricky Starks will be taking on MJF for the AEW World Heavyweight title, so let’s get right to the action.

Forget the action. AEW has licensed the song “Roundball Rock” which is the song that was used for the NBA on NBC back in the day!

If you forgot, Death Triangle leads the series 2-1. Fenix gets dropped in the corner with a toe hold and Matt Jackson comes over the top rope with a leg drop. Pac gets hit with a back breaker by Kenny Omega and Nick Jackson follows with a stomp. Nick may have tweaked his ankle and tags in his brother. Nick waves off a tag from Kenny. Pac takes a dual suplex as Nick is still having his ankle looked at. Meanwhile, Matt unloads on Pac. Fenix lands a kick to Matt head and takes out Omega with a suicide dive. Omega comes up lame as Nick Jackson is taken to the back.

After a commercial break, Matt is still fighting and nearly gets a pin on Fenix after a Northern lights suplex to Penta. Omega finally gets a tag and turns Pac inside out with a flying cross body. Kenny follows with a moonsault and almost gets the three count. Penta takes a snap dragon suplex. Omega fights off Pac with an enzuigiri and follow with another snap suplex. Penta shuts down the V Trigger on apron. Penta is kicked to the floor and Kenny sends Fenix to meet his brother. Pac cuts off Omega on the apron and hits a pump kick in the corner. Omega counters with a brain buster. Penta hits Matt with Fear Factor on the apron. Fenix with a kick to Omega in the corner. Fenix with a Spanish Fly off the top. Fenix with an inverted frog splash, but Kenny kicks out of the pin. Pac misses the Black Arrow. And Nick Jackson is limping his way down the ramp. He’s on the apron and wants the tag. Omega gets to him and Nick takes down Fenix and Penta.  A lariat takes down Pac. Nick hits Fenix with a cutter, but gets caught on the superkick. With Fenix holding Nick’s leg, Penta crushes the ankle with a hammer. Rey locks a knee bar and Nick taps out.

After the match, Omega gets on the mic. He has a message for Death Triangle; he wants to make the hammer legal, along with all other weapons.

MJF “praises” Ricky Starks’ promo from last week. Max tears down Ricky for finally hitting one out of the park after numerous tries. MJF takes credit for making Ricky a star.

The Acclaimed make their way to the ring, only to be assaulted on the ramp by Jay Lethal and crew. Jeff Jarrett crushed Max Caster with a guitar shot to the head. Jeff wants to know if they have their attention now.

Chris Jericho is obviously upset that he lost the Ring of Honor World Championship to Claudio Castagnoli. He’s out here calling for the giant swing to be banned. Jericho wants Daniel Garcia to shadow Sammy Guevara after losing the ROH Pure title. Sammy calls out Jon Moxley heading into their match on Friday.

Cage puts the brakes on an attempted hip toss. He catches Jungle Boy in mid air, but Jack’s speed is able to over come. JB hits a diving hurricanrana. Cage with a vertical suplex off the middle rope. Cage does biceps curls with Jungle Boy in a show of disrespect. Cage runs into a boot in the corner. Perry with a running fore arm shot. A lariat staggers Cage, but doesn’t drop him. Jack with a DDT, but can’t make the cover. Cage with a release German suplex and follows with a full nelson driver. Perry nearly steals the match with a roll up. Jungle Boy with a Canadian destroyer into the snare trap, but Nana has the ref occupied. Cage taps, but the ref doesn’t see it. Perry shoves Cage into Nana and rolls him up. Jungle Boy gets the three count.

After the match, Jungle Boy calls out Big Bill Morrisey. Instead, he gets Stokely Hathaway. Jungle Boy goes after him, only to get intercepted by Lee Moriarty. Big Bill joins in on the beatdown. They destroy Jungle Boy in the middle of the ring. Hook makes his way to the ring. The Firm clears the ring. Hook helps Jungle Boy to his feet.

Moxley said last week that they were going to make a statement and that’s what they did at Final Battle. Moxley is going to stomp out Sammy Guevara. He tells Hangman Page he knows where to find him.

House of Black w/Julia Hart vs. The Factory

Oh, the Factory is all ready in the ring. This doesn’t bode well. Julia Hart spits black mist into the eye of Nick Comoroto and the House attacks. Malakai sits in the corner and watches. The match start and Black drops QT Marshall with the round kick. He covers and gets the pin.

Winner via pinfall: The House of Black

Oh man, Jericho is going to kill this poor kid. Andretti gets some chops in before Jericho kicks him to the floor. He unloads on Action with shots in the corner. Andretti with a head scissors and follows with a tornado splash from the middle rope. Jericho hits a Death Valley Driver and follows with a Code Breaker. Andretti kicks out and we are going to commercial.

After the break, the crowd is fully behind Andretti. Jericho chops him into the corner. Action gets a boot up and chops at Jericho, who pokes him in the eye and hits him with an elbow. Andretti hits a back breaker into a neck breaker. Action with a split legged moonsault, but Jericho gets his knees up for the black. Andretti ducks the Judas Effect and hits an enzuigiri. He follows with spring board moonsault to the floor. Action leaps back into the ring, only to get caught in Walls. Andretti rolls though into a pin. Jericho kicks out. Actions with a standing shooting star press and hooks the leg for the pin. He gets the three count!

Andretti leaps into the crowd to celebrate.

Ricky Starks is ready for MJF.

Austin and Colton Gunn have the attention of FTR.

Chris Jericho is backstage destroying everything in rage.

The two brawl on the floor before the bell can ring. Ruby is slung into the security barricade and then into the ring steps. Both women enter the ring and the bell can finally ring. Soho with a suplex and then rains down mounted strikes. Melo with a back elbow. Soho hits No Future, but Tay slips out of the ring. Soho tracks her down on the ramp. Melo with a DDT on the ramp.

After the commercial break, Ruby connects with a kick in the corner and then drives Melo’s face into the middle turnbuckle. Melo rolls away from the senton, but Ruby lands on her feet. Melo does kick her right in the face, though. The two trade blows in the middle of the ring. Melo with a Judo throw and follows with a pile driver. Soho kicks out. Ruby with a knee to the face and hits Destination Unknown. Soho covers and gets the pin.

Alex Marvez gets a medical update on Hangman Adam Page, who says he doesn’t know when or if he will be cleared. Page couldn’t remember his son’s name after his match with Moxley.

Dustin Rhodes is with the Best Friends and calls out Kip Sabien and his crew.

MJF kicks Starks and knocks him to the match with a forearm shot. MJF then taunts Starks by copying his pose. A shoulder tackles sends MJF to the floor. MJF hops the barrier into the crowd.  Starks with a series of hip tosses and then a back body drop. MJF kicks out of a pin after a sunset flip. And inside cradle can’t get the pin either. Ricky with a strong clothesline. MJF with a thumb to the eye. He whips Starks off the turnbuckle. MJF hangs Ricky on the top rope and he falls to the floor.

After a commercial break, Starks comes out of the corner with a lariat. Ricky hits a jaw breaker and follows with a diving back elbow in the corner. He takes the champ done with a lariat. MJF fights off Rochambeau only to take a Liger bomb. The champ kicks out. Max with a stomp to the elbow. The two trade roll ups. MJF with a powerbomb onto his knee, but Starks kicks out. MJF slaps Starks around and then the two trade a flurry of punches. MJF runs into a big boot, but he answers with a rolling elbow strike. Starks with a spear, but he can’t make the pin. Both men are down. Starks makes a one arm cover, but MJF suckered him in. The champ locks in the Salt of the Earth. Starks tries to make the crawl to the ropes, but MJF is able to grab his arm. Starks finally forces a break by getting a foot on the bottom rope. Starks with  a thrust kick. MJF goes up and over and hides behind the ref. The champ shoves the ref away. MJF with a low blow behind the ref’s back and covers to get the pin.

After the match, Bryan Danielson chases MJF into the crowd. See you in seven.

A pretty good show was sandwiched between two great matches. Anytime Death Triangle and The Elite lock up count me in. The best of seven series has been a great run. MJF and Ricky Starks put on a great show, even if MJF had to cheat to win. In other new, Chris Jericho lost to enhancement talent.