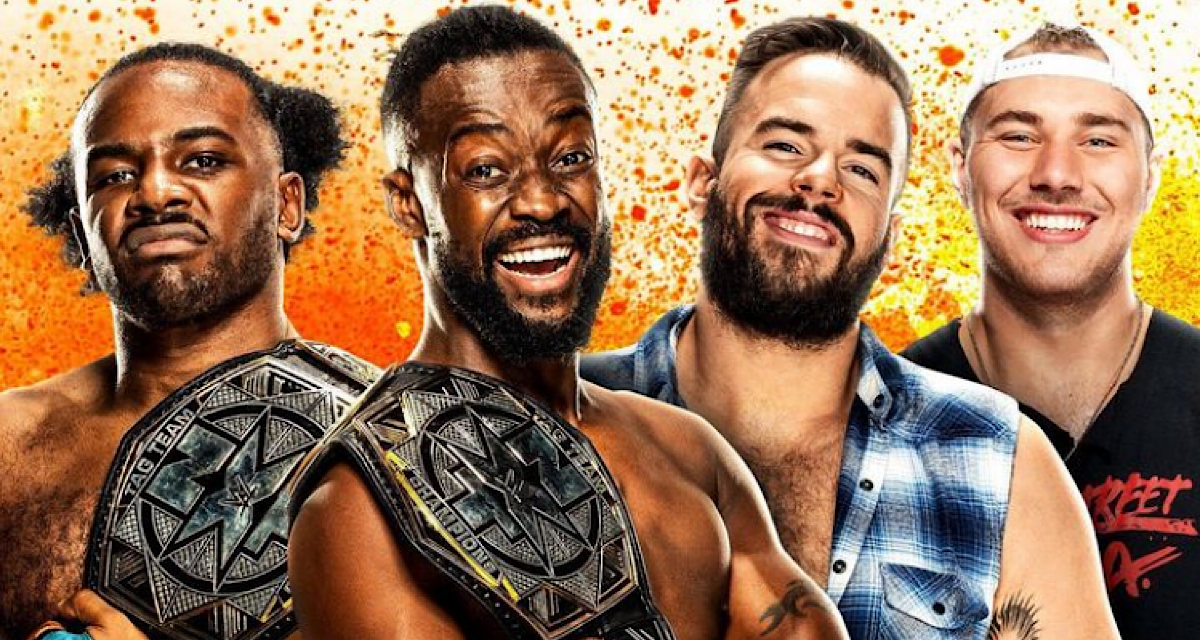 The contrast of character between the raw authenticity of Hayes versus the cheesy masked superhero in Axiom is glaring, but they’re about even amidst the opening chain-wrestling sequence. Hayes controls through picture-in-picture with crisp offense, but a smooth reversal from Axiom lends him an arm-triangle submission. He connects with a top-rope hurricanrana before Trick WIlliams interferes, which allows Hayes to capitalize with his signature leg drop for victory. As expected, a beautiful opening showcase for both, but Axiom ultimately gets revenge on Williams with an outside moonsault.

Grayson Waller is interviewed backstage, demanding his title match with Bron Breakker tonight, except the champion is out promoting NXT Vengeance Day. “Meet me in the middle of the ring, b-” says the number-one contender.

Tony D’Angelo talks with “Stacks” about getting a North American Championship match and asks him to tell Dijak to “stay out of our business.” In comes Waller looking around for Breakker, and D’Angelo begrudgingly agrees to keep an eye out.

Stark attempts to blindside Lyons, but the latter gets the upper hand after a trip. Booker T on commentary says, “TikTok and championships just don’t go together,” which he should forward to the NXT Women’s Tag Team Champions. Lyons and Stark would’ve been a solid championship duo, but yet again, a rivalry spurs from an abrupt backstabbing. Stark attacks with stiff strikes and, by leveraging the ropes in a roll-up exchange, gets the victory in a quick but great showing.

Footage from earlier this week shows Fallon Henley, Brooks Jensen, and Josh Briggs discuss the possible foreclosure of their bar. Accountant Kiana James and her assistant walk in, revealing that she paid off their debt, only to threaten buying it herself. It’s a fresh and interesting storyline, but it’s filmed like a corny Hallmark movie.

Like a chicken without its head, Toxic Attraction carries on without a leader, but Ivy Nile and Tatum Paxley take early control. The champions connect with simultaneous dives preceding picture-in-picture, and Carter makes a comeback thereafter assisting Chance with a big top-rope hurricanrana. The teams exchange high-pace offense until Nile cinches a Dragon Sleeper only for Carter to reverse and gain the pinfall victory in a nice match.

A vignette displays the nightlife of Oro Mensah, who is “here for a good time.” He just likes to have fun, Maggle!

Booker T has an emotional sit-down interview with former trainee Roxanne Perez, the new NXT Women’s Champion. “Everybody at Reality of Wrestling is so proud of you,” he says.

Apollo Crews was treading water on the main roster, and now he’s back in NXT to tread more water. He calls his shot for NXT Vengeance Day until Carmelo Hayes interrupts, who claims he’s next in line for the NXT Championship. “Name the time, the place,” says Crews.

Pretty Deadly presents NXT Champions New Day with their list of requested presents, which includes Tyler Breeze’s selfie stick. But without every single present, New Day refuses to grant them a match for the gold.

Isla Dawn blows red dust into the face of Alba Fyre, who is taken to the trainer’s room and somehow cleared to compete. Later, footage from last week shows The Schism talking down to Malik Blade, Edris Enofe, and Odyssey Jones.

The redheaded stepchildren of their respective factions are left in NXT like Macaulay Culkin while the rest are succeeding on the main roster. “What the hell just happened,” asks Booker T on commentary when Lopez gets the sneaky victory with brass knuckles to a dead silent crowd.

North American Champion Wes Lee is bringing the fight to Tony D’Angelo and looks ahead to Dijak as well. “This title isn’t leaving my shoulder anytime soon,” the champion states in a backstage interview.

Cleared to compete despite being misted twenty minutes earlier is Alba Fyre, who competes against a popular rookie in Sol Ruca. But Isla Dawn attacks the former during her entrance, bashing her hand against the steel steps with a bat. This time, Fyre won’t be cleared to compete.

No time to dwell on hokey witchery, because Christmas break is in session with Andre Chase, who debuted on RAW last night by being innocently assaulted by The Bloodline. Students offer the professor gifts at the Andre Chase University holiday party, but Duke Hudson forgot. So, he steals someone else’s coming straight “from the heart.”

Brooks Jensen and Josh Briggs are “going balls to the wall” against the New Day tonight. Kiana James steps in to wish Jensen – in a Terry Gordy shirt – good luck: “I’m all business, but I’m still a woman.”

Footage from earlier today shows Drew Gulak in-training when Hank Walker asks for some advice. Gulak asks Walker to attend his seminar next week: “I don’t want you to participate, I want you to observe.”

Jensen and Briggs are uncharacteristically booed against the Hall of Fame-caliber New Day, bringing superstar experience to the NXT tag team division. The champions are in fine form, and Kiana James watches front-row ringside as Briggs makes a comeback preceding picture-in-picture. Kofi Kingston receives the hot tag and hits the SOS on Jensen, who grabs the bottom rope and tags in his partner to single-handedly take out the champions. Briggs hits an insane moonsault bringing Orlando to its feet, but Kingston connects with Trouble in Paradise, and Xavier Woods hits the finishing elbow drop to retain in a fantastic main event. The competitors embrace in a show of respect to “that was awesome” chants from the crowd.

“Stacks” prepares to tell off Dijak while Grayson Waller calls out Bron Breakker, who supposedly hasn’t been inside the arena all night.

Diamond Mine is interviewed in the parking lot, interrupted by Sanga and Veer Mahaan. Next week, Julius Creed takes on JD McDonagh and tells the opposing duo to watch.

Waller enters the ring to call out absent NXT Champion Breakker, but forgets that he’s “a coward.” Waller confidently proves he’s untouchable on the microphone until Breakker eventually barges in with a spear, inadvertently knocking himself out. Waller takes off his stylish fur coat to reveal a plate of armor: “At New Year’s Evil, I’m gonna outsmart you one more time when I become NXT Champion. Because that, Bron Breakker, is the Grayson Waller Effect.”

That man Grayson Waller is a superstar who deserves the rocket strap pronto. Besides a few segments on tonight’s show, this episode of NXT was very enjoyable with some notable highlights being Carmelo Hayes and The New Day of course.