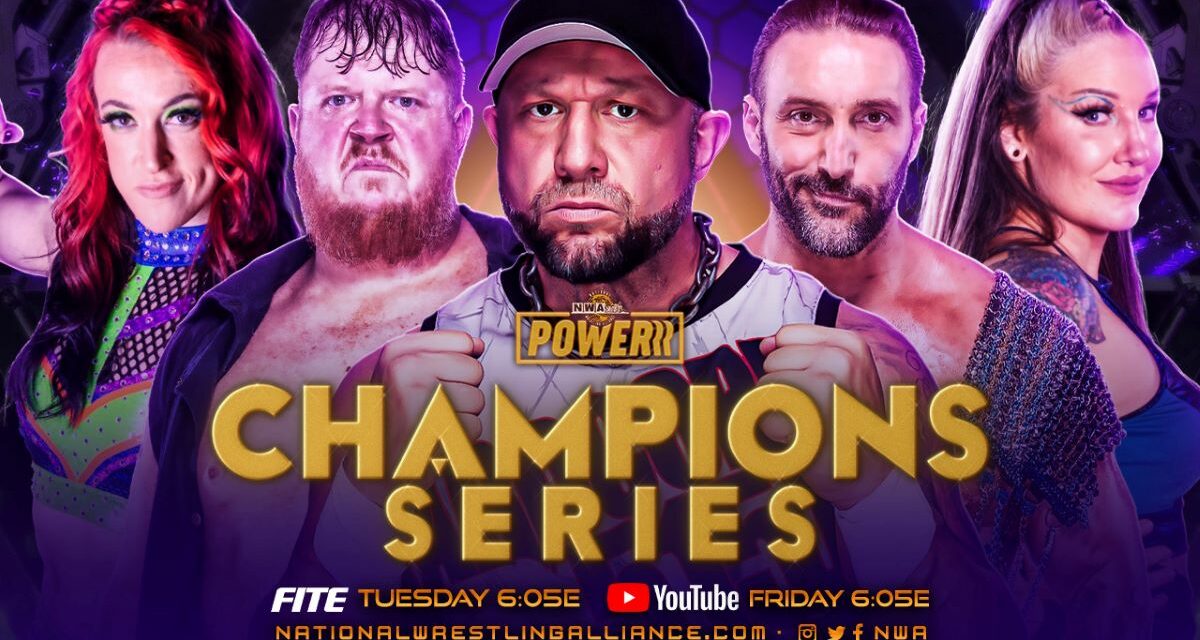 The Champions Series rolls on in the semifinals of The Champions Series, and four teams remain as they attempt to score more points so they can receive title shots at any time.  There’s also some updates as a draft was held where the participants from the losing teams now get picked to help with the winning teams.  We’ll see what else the National Wrestling Alliance has in store tonight.

But first, since I was indisposed last Saturday for NWA USA, here’s a…

Quick Recap of the First Round

…and now you know the rest of the story.

We head to the Skyway Studios in Nashville, TN.  Joe Galli and Velvet Sky have the call, and there are some prematch promos where Tyrus and Jeez debate on Murdoch getting involved with their team. Also, Chris Adonis, Thom Latimer, Odinson, KiLynn King, Madi, and Samantha Starr talk about how cool it was they were drafted to the advancing teams and how they’ll add points.  Would’ve been nice to have seen the draft in action, but…maybe next time.

There’s also some predictions with Jax Dane and Trevor Murdoch for their upcoming match.  The best line of the night is where The Dane Event tells Murdoch to beware because “I am the Megalo-Dane.”  Heh.  Nice wordplay. 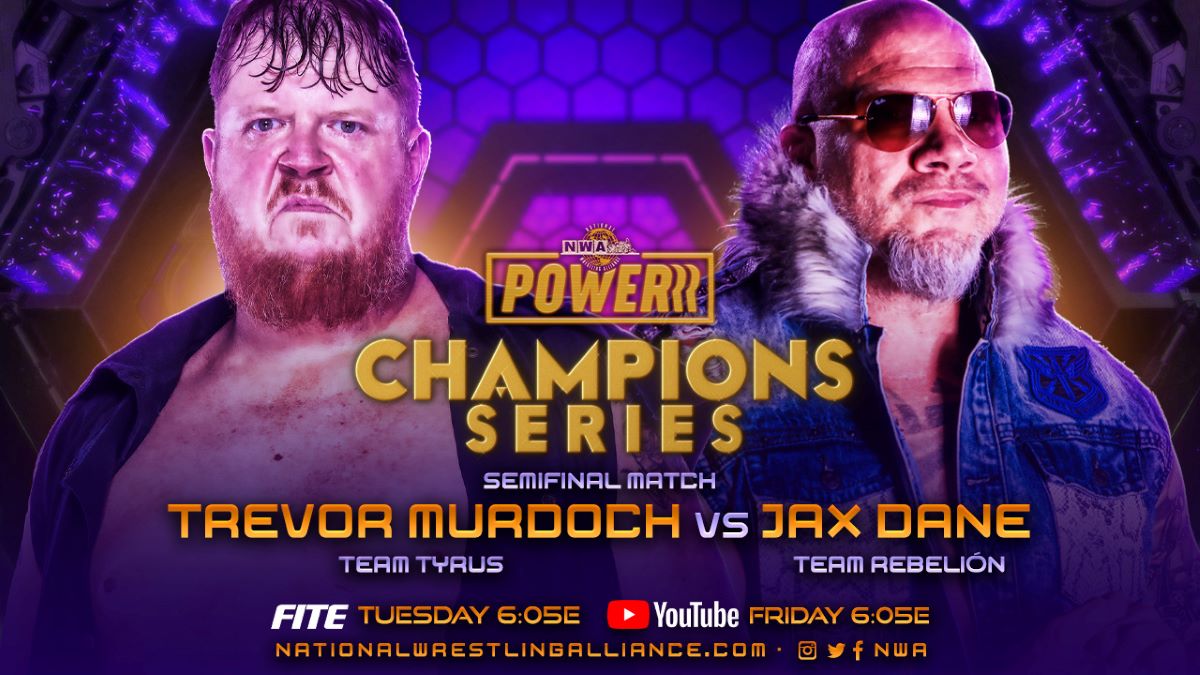 Dane is already playing mind games with Murdoch, and he keeps up chicanery until he connects and The Dane Event takes a powder outside the ring.  He confabs with Chris Silvio, Esq., who gets on the mic and goads the former NWA champ.  Murdoch starts to go after him, and then Dane uses the distraction for more dirty tricks.  Once back in, Dane picks apart Murdoch and goes for a neck crank submission to Murdoch.  He starts to fade as the ref lets his arm drop twice, but Murdoch finds his second wind before the arm drops a third time and he fights back, but Dane knocks him out with a Samoan Drop and follows with The Dane Event clothesline. Dane takes his time, much to his teammates’ chagrin, and lazily covers Murdoch, but the ref spots he has his foot under the ropes to break the count.

Dane tries to soften up Murdoch further and he rams him into the post and goes for a flying bulldog, but The Gold Branded one escapes the ring.  As he makes his way through the other team members at ringside, La Rosa Negra distracts Dane and then slaps him stupid.  Back in the ring, Murdoch lands a clothesline to a big boot, followed by a powerbomb.  Murdoch goes back up the top turnbuckle for his finisher and measures Dane, and then the bell rings, and that means this match is a…

No Contest via Countout and Two Points are awarded to both teams.

Murdoch is disgusted at the ruling, while Dane smirks his way knowing he owned him mentally throughout the match.

Team captain Kerry Morton talks highly of his picks that are going to face off in the upcoming three-on-three tag team match. Bully Ray questions his smarts because he’s nothing like his old man. Captain’s Assistant Austin Idol of Team Great states his son The Great Cyon inherited his smarts and predicts they will be on top.

So let’s check out the next match, which is a… 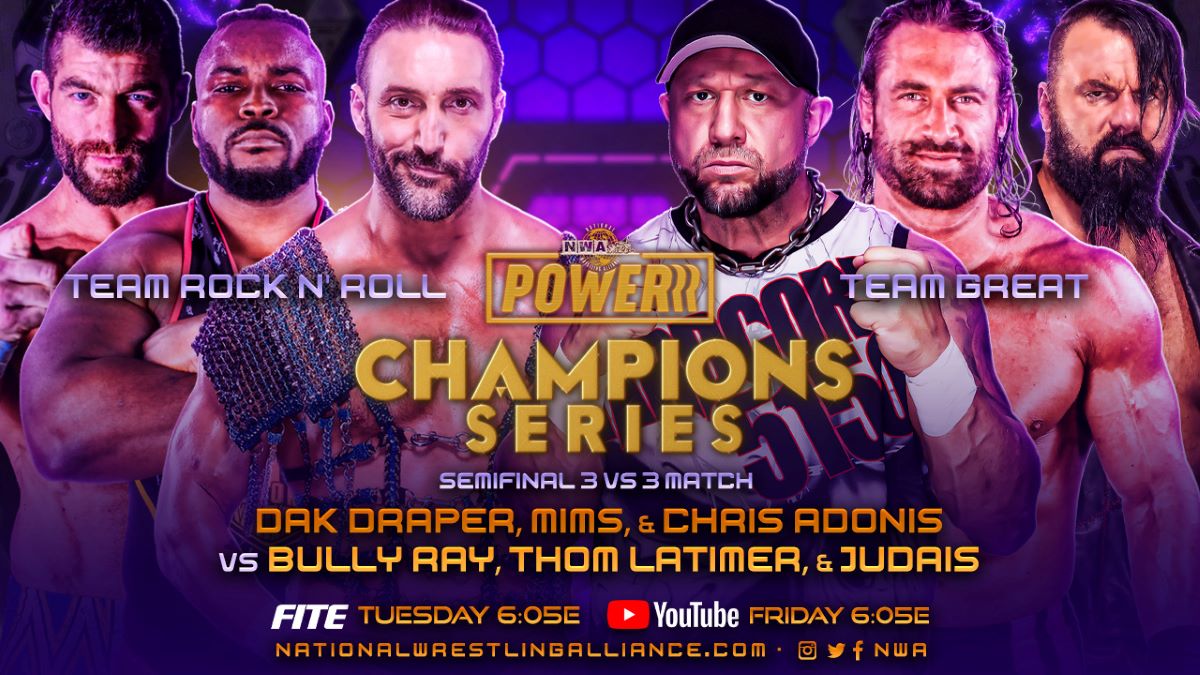 Adonis and Latimer start, and there’s a little one-upmanship for the former Strictly Business members in the ring.  A flying shoulder tackle by Adonis and Judais tags himself in.  Draper comes in too and he’s able to overcome the big man, but his double knees miss, and that allows Judais to manhandle the Mile High Magnum.  Mims tags in with a head butt and Judais shakes it off.  Mims gestures for Ray to step in the ring, and Judais obliges.  Mims is strong but Ray has that veteran savvy as a multi-time tag champion.  Ray looks good, but then Draper and Adonis grab his legs from the outside and crotch Ray on the ring post.  From there, Team Rock N’ Roll triple team the Hall of Famer, and he is a Bully in Peril.

Draper bear hugs Ray but he gets an elbow to his head to create space, but soon Draper clotheslines him back down.  Mims is tagged in and he hits the ropes to get some steam, but Ray cuts him in half with a desperation spear.  Ray crawls to his corner for the hot tag to Latimer, and he is Evil en Fuego as he clears Team Rock N’ Roll out of the ring.  A Powerbomb to Draper, and Latimer covers, but Mims breaks the count.  Judais and Mims battle it out and he mounts the big man in the corner with punches.  Ray comes from behind and gets Mims in an electric chair and Judais goes up top and lands with the Doomsday Device, and then Latimer and Judais pick up Mims for Ray to execute a triple team 3-D for the pin and the win.

Your Winners via Pinfall: Bully Ray, Thom Latimer, and Judais

That pinfall victory allows five points for Team Great in the semis.

May Valentine is backstage with Chris Silvio, Esquire. She calls him a Nostradamus, and he says he knew all along that Murdoch would never beat his client, Dane.  Silvio even goes on to predict as the Champions Series rolls on he will continue to show why he has held every title in NWA.

We get another prematch promo as King talks about her success in the NWA and how she is excited to face Kay again. Kay is equally excited but wants to prove why she is the best.  So let’s see who comes out on top as we go to another… 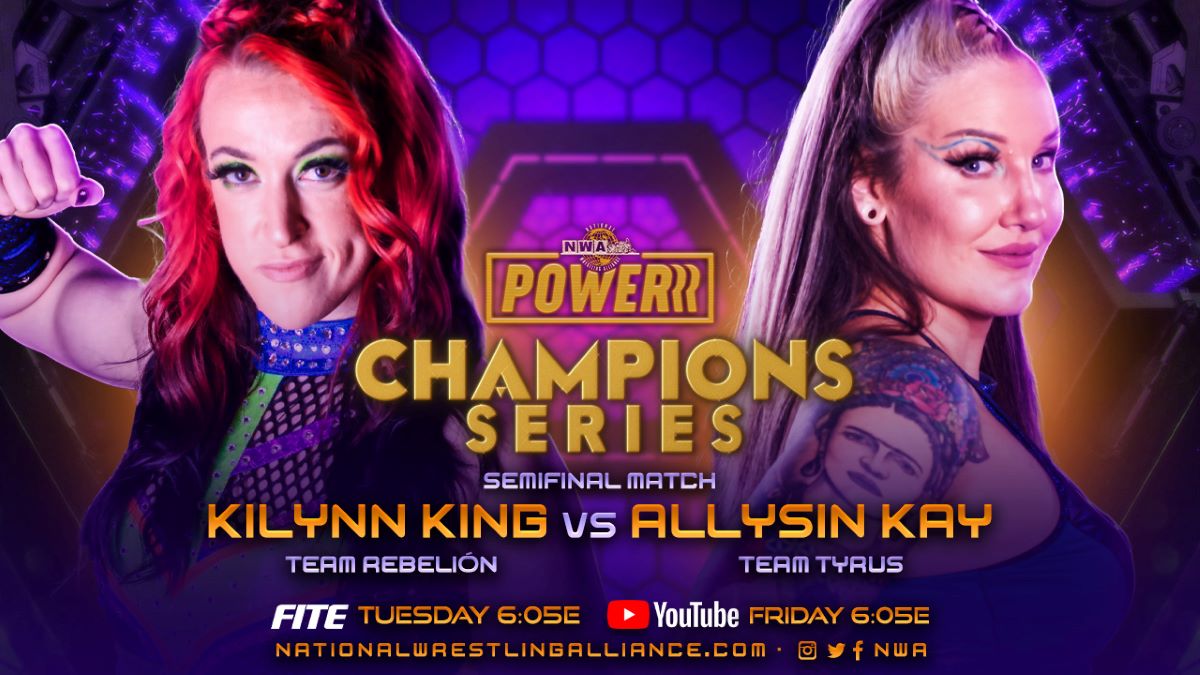 The score is tied up between the two teams, and both women are itching to get the points.  A collar and elbow tie-up and Kay and King roll out and jostle in the crowd and then get back in the ring, still locked in the starting hold until they break off.  King offers a test of strength and Kay obliges and starts to overpower but The Majesty of Muscle pushes back.  King goes immediately to a cross face and Kay quickly gets to the ropes to break the submission.  King lands with a boot and she sets her up with a suplex but gets it reversed and she covers for a one count.  King recovers and gets on the middle ropes for a springboard kick to Kay’s face to knock her out of the ring.  On the ring apron edge, she goes for thrust kicks but Kay blacks her and then trips her up.

Kay is in full control of the match, and she tries an STF, but King’s height advantage allows her to reach the bottom ropes.  She follows up with a clothesline to Kay’s back and then another chop to her chest in the corner.  King goes for a sunset flip, and Kay uses her core strength to block the move.  She lands an ugly-looking reverse tombstone piledriver to cover for a two count.  She goes for a powerbomb attempt, but King blocks it and nails a German suplex by King gets another two count.  A toe drop allows Kay to lock in another STF, but she releases to go for another submission hold, and King sees an opening and cinches in the crossface and Kay finally taps.

Your Winner via Submission:  KiLynn King

That submission gives Team Tyrus six points for a total of eight, as they lead in the semis.

Valentine is now with The Sinister Minister, Father James Mitchell, and she inquires about the talent growing under his watchful eye. Mitchell says he feels like a proud father and Judais needs to be seen by all.  He also lets the cat out of the bag as he confesses that Judais “was the subject of a triple-blind, peer-reviewed study at the Helsinki Institute for Medical abnormalities, where it was conclusively proven that Judais possesses a genetic mutation, which gives him a pain tolerance five…five times greater than a premier pro football player.”  Mitchell goes on to say that it makes him nigh unstoppable and he promises 2023 with be the year of The Priest of Punishment.

Jeremiah Plunkett props up his Ill-Begotten teammate, Alex Taylor, and that he is an exceptional athlete in a pre-match promo. PJ Hawx knows Taylor is tough but he will beat him tonight to get the victory to earn a junior heavyweight shot or a tag team shot down the road. Taylor isn’t worried about Hawx, but more about letting down the lovely ladies that come to see him.

Well, that’s been enough talk, because It’s Ti…wait, what?

Either way, it’s the Main Event of this Champions Series between… 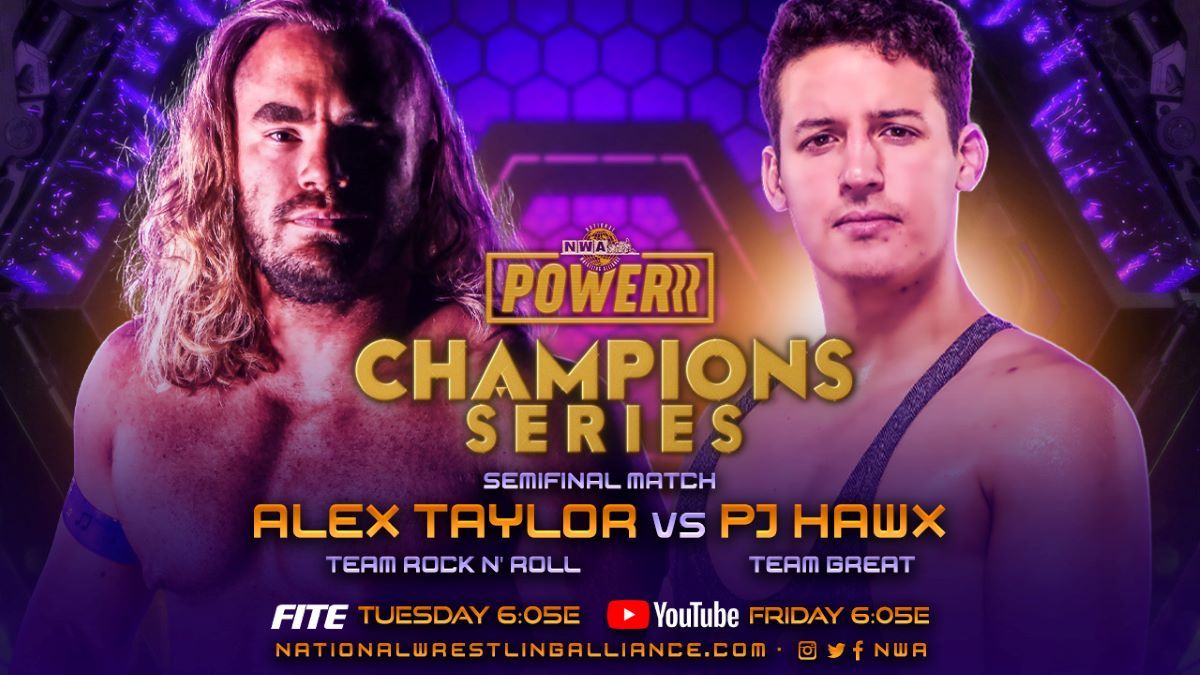 As the bell rings, Hawx is in the driver’s seat with his technical wrestling skill, but Taylor gets in a straight shot and sends to him ropes but Hawx goes to a submission hold and transitions into a pin and Taylor manages to kick out at two.  Hawx outwrestles the Ill-Begotten member at every turn, but Taylor nails a dropkick to his ankle, and Hawx is hurting in the corner.  Taylor follows up with a lungblower and targets the lower back of Hawx and doesn’t give him a chance to catch his breath. A suplex to a float-over pin gets Taylor a two count.  He gets Hawx in a camel clutch to add more pressure but Hawx manages to wriggle out of the painful submission and goes for a rollup for a two count.  Taylor is getting frustrated and tries a suplex but is blocked as Hawx reverses to an inside cradle for another two.

Taylor nails Hawx with a tilt-a-whirl backbreaker for a two count, and then Hawx tries another pin but to no avail.  Taylor rushes into the corner and Hawx evades the attack as he hits the middle turnbuckle to injure his…err, little Begottens.  Hawx comes from behind him and nails him with a back suplex, and both men are slow to get up.  Hawx comes back up first with a clothesline to a delayed vertical suplex but he’s slow to cover and only gets a two count.  Hawx goes for the Hawx Clutch submission, but Taylor pushed him off and gets a roll-up pin for one, two, and three.

Your Winner Via Pinfall:  Alex Taylor

As Taylor pulls a rabbit out of his hat, that gives his team five points, and Teams Great and Rock N’ Roll are tied up.  PJ is in the middle of the ring looking dejected as his dad Luke looks on from outside the ring as the show goes to the credits.

Again, I wished they did some kind of separate segment showing how the individuals from the losing teams were drafted to those in the remaining four of The Champions Series, but what’re you gonna do?

Highlights of the night are definitely the triple team 3-D, the main event with Taylor/Hawx, and Dane/Murdoch fighting to a draw.  I’m just a sucker for these types of tournaments.