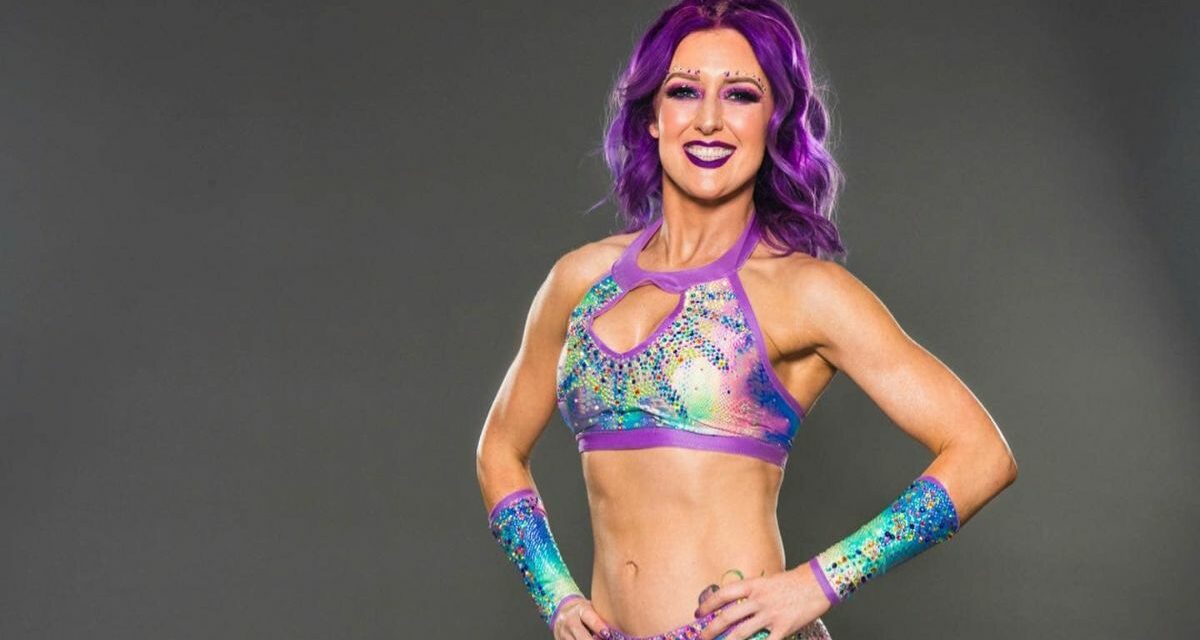 Ray Lyn is coming home, sort of, Thursday night for a Demand Lucha show in Toronto at Parkdale Hall.

The 34-year-old from Pittsburgh said she spent a lot of her early years wrestling in Toronto, in addition to touring Nova Scotia and Quebec.

“I’m really excited to be coming back,” she said.

Wrestling now for just under 10 years, Ray Lyn (real name Rachel Kelvington) said her story of how she first got involved in the game “is a bit bizarre.” She grew up training in martial arts and kickboxing.

“I didn’t grow up watching wrestling, but I knew of it,” she said. “I was working as a bartender at a bar named Cheers. The regulars that came in requested I put on Raw every Monday night. I never really paid too much attention to it until after my father’s sudden passing. When I came back to work after my dad’s funeral, I remember watching Raw and for whatever reason, I couldn’t take my eyes off the TV. I found myself obsessed with the costumes and characters. I loved the fact that they were somewhere different every night. Week after week I was excited to see what was going to happen next.

“One night while I was watching, I decided that being a wrestler was my destiny. My dad died on October 30, 2012, and by April 1, 2013, I had my Honda Civic packed and I was moving to Louisville to become a professional wrestler. Wrestling helped me through my darkest days and I’m forever grateful that it somehow came into my life.”

Needless to say, Lyn has tuned in to wrestling much more in the 10 years since she’s been in the ring. 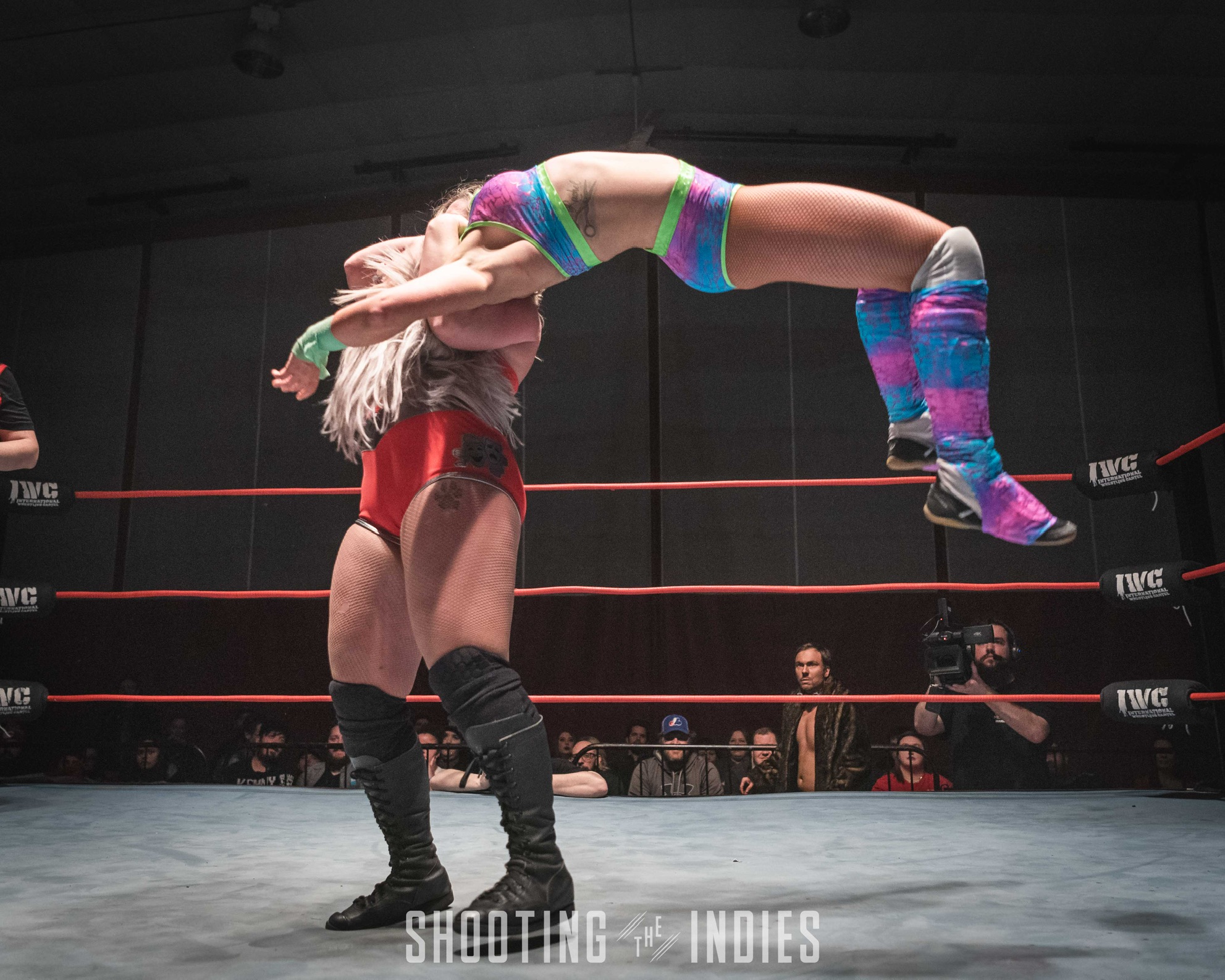 Ray Lyn takes on Katie Arquette in a bout for IWC Pittsburgh. Photo by Shooting the Indies

“One of the first female matches that made me think I made the right decision was Gail Kim vs. Taryn Terrell in a Last Knockouts Standing match (from TNA’s Slammiversary 2013),” she said. “They brought it to each other, and I was on the edge of my seat the whole time.”

Stepping through the ropes each time out means the 5-foot-4 Lyn is slowly, but surely, putting women’s wrestling on equal footing with the men’s side. For her, that is all the motivation she needs. “I think the stigma about women’s wrestling and what people think it is drives me to be my best every time I step in that ring,” Lyn said. “I want to prove the haters wrong.”

Currently wrestling for Women of Wrestling (WOW), Ray Lyn said “it’s awesome to be a part of an all-women brand that allows us to showcase ourselves in and out of the ring.” She also has tagged often with Heather Monroe as Blonde Force Trauma, including a run in SHIMMER. 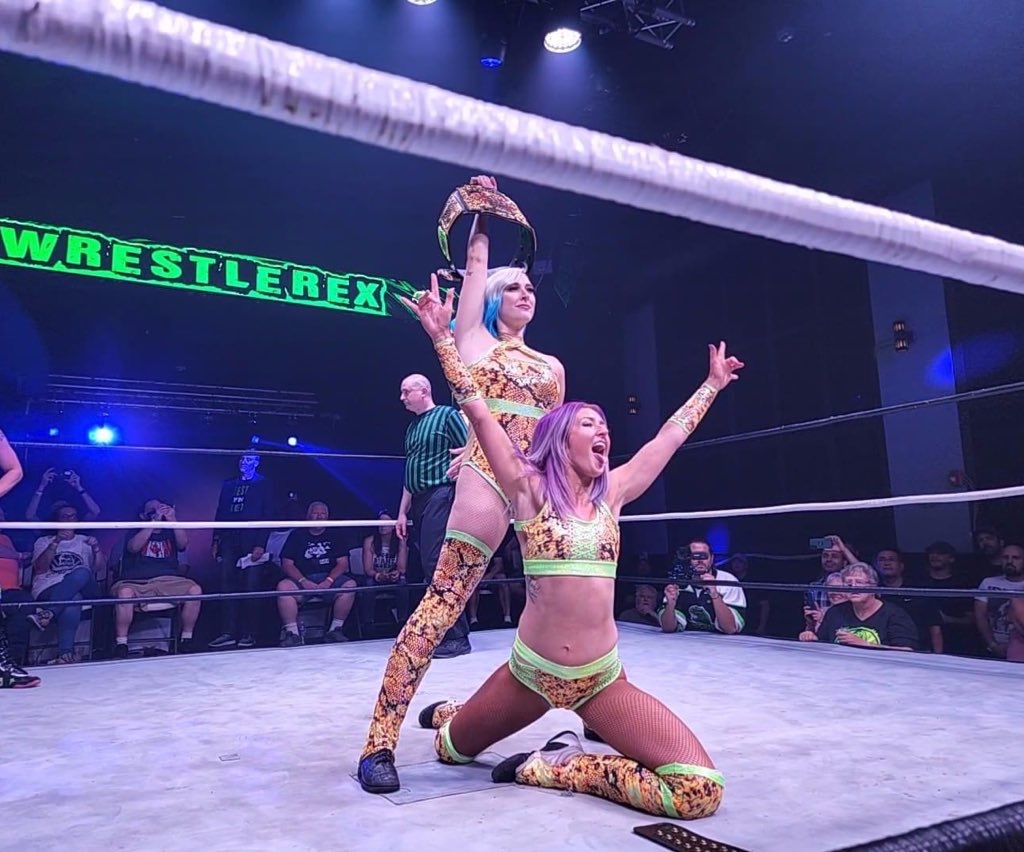 Lyn has wrestled for WrestleRex Pittsburgh with tag team partner Heather Monroe as Blonde Force Trauma, holding the Bri Combination wrestling tag team championship, based in New York and New Jersey and the belts can be held by women and men. Photo provided by Ray Lyn

Would she ever look at offers from WWE, AEW, Impact, or MLW?

“My goals are to either be tag champions (with WOW) or to be world champion one day,” Lyn said. “Women’s wrestling has changed so much in the 10 years since I started. It has gone from ‘the popcorn match’ to the main event. It’s very cool to see more opportunities for so many women. When you’re competing on a high level and showing up, the world is recognizing that women’s wrestling is a force.”

She did wrestle on the January 23, 2017 episode of Monday Night Raw as “Rey Lynn,” losing in a one-minute squash to Nia Jax.

Still, at 34, Lyn realizes her time in the ring won’t last forever.

“(In five years) I see myself possibly transitioning from an in-ring role to a coaching role,” said Lyn. “I really love wrestling but realistically, I don’t know how long my body will allow me to do it. I would love to be able to share the knowledge I’ve learned all over the world to future generations of wrestlers.” 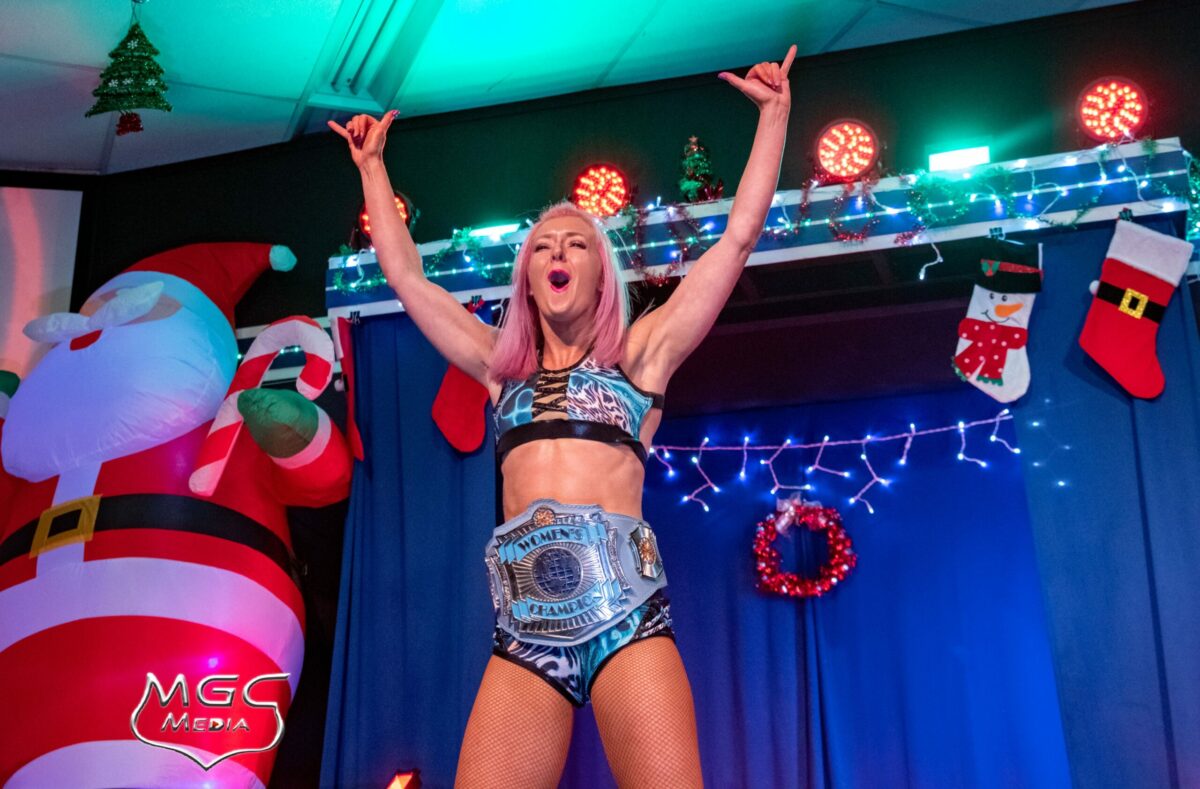 One of the titles Ray Lyn has held is the Maryland Championship Wrestling women’s championship. Photo provided by Ray Lyn

Outside of the ring, Lyn is in a long-term relationship with fellow wrestler Sam Adonis, something she said has positives and negatives, but the pluses outweigh the minuses.

“We understand each other’s hectic travel schedules,” she said. “When we are home, we enjoy being home. Sam has helped me improve my in-ring work so much and I’ve helped him eat cleaner in the kitchen and train harder in the gym. I would say the cons are that we both travel a lot, and we sometimes are apart for weeks at a time.

“At the end of the day, there are more pros than cons.”

As if she wasn’t busy enough, Lyn also works as a barber when she’s not travelling.

“Family, wrestling, fitness, and hair are my biggest passions in life,” she said.

Does Ray Lyn have advice for not just potential wrestlers, but for people in general?

You bet she does.

“Always follow your dreams,” she said. “I have achieved so much more than I ever thought I could just by not giving up on myself.”