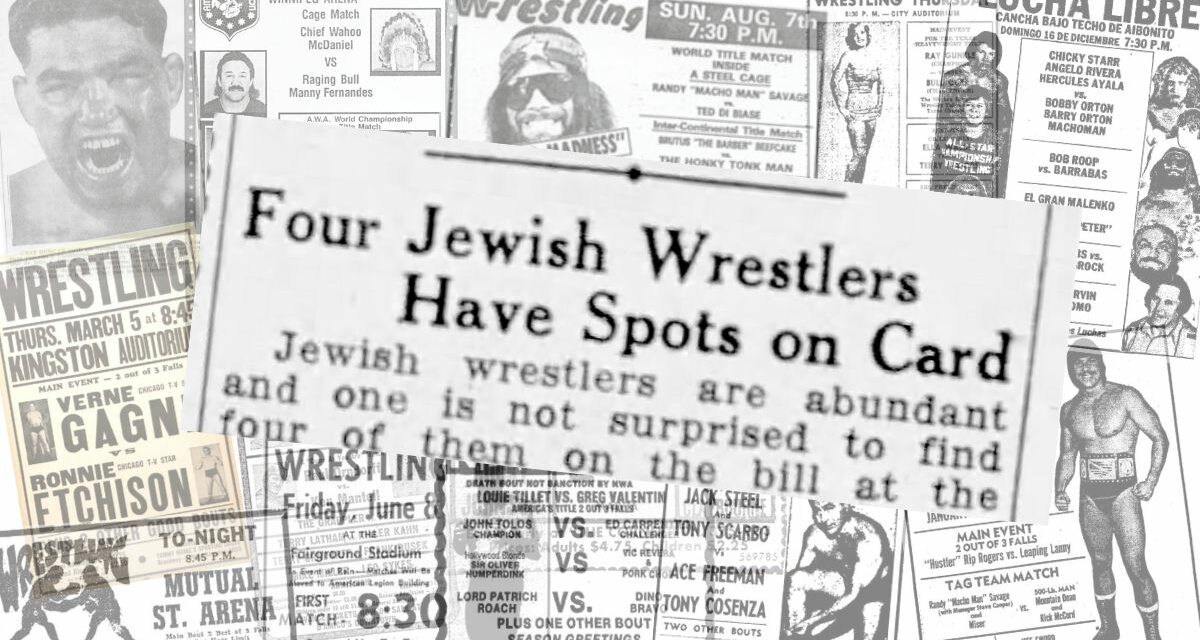 It’s that time again, time to break down a unique wrestling card from yesteryear. With the holidays firmly in gear I thought I’d focus on some of the great Jewish wrestling stars of the 1930s, at the start of a wrestling boom and a time when ethnic babyfaces and heels ruled the roost.

This card took place at the Coliseum, a fairly new venue in the Bronx, having opened in 1928. Wrestling in New York was buzzing in 1932, thanks in no small part to the impressive box office appeal of Jim Londos, heavyweight champion and one of the biggest draws in the sport’s history.

By the time of this card, Londos had split from New York, after a falling out over pay — and namely the sheer amount of his pay going to “chiselers” — men who claimed a percentage of a fighter’s purse, despite no, or minimal, work. Chief amongst these ne’er-do-wells was Toots Mondt, but Jack Pfefer certainly made the list.

To combat the threat of an independent Londos, New York City wrestling kingpin Jack Curley formed a formidable collection of promoters and bookers, including Mondt, Pfefer, Ray Fabiani, Paul Bowser, and others. This card is an excellent example of the impressive firepower available to the combination, even at a second-tier venue.

What really caught my eye on this card was the volume of Jewish wrestling superstars. With the holidays firmly in gear, this card represents a great chance to talk about the great ethnic champions of the 1930s, with the Jewish championship enjoying particular popularity in New York, thanks to its large immigrant population.

Perhaps no name sticks out more on this card than that of Paul Boesch. Boesch, later a long-time promoter in Houston, Texas, got his start in wrestling only about two months earlier, having been discovered as a heroic lifeguard on a Long Island beach. Pfefer quickly scooped up the Brooklyn-born grappler and helped make him one of the top Jewish wrestlers in the country. This was partly due to his expert use of the flying tackle, a popular finish at the time. He would eventually capture the Jewish Heavyweight Championship, contesting with other notable competitors (also on this card), Sammy Stein and Herb Freeman.

There was just one issue with Boesch as Jewish champion: he wasn’t Jewish. Pfefer saddled the grappler with the German-Hebrew gimmick to appeal to the local immigrant population — something common at the time. The only problem was that Jewish men have a tell-tale, which only shows its ugly face at home or in an arena shower.

Having granted an interview to the Jewish Daily Forward, Boesch showered while waiting for the reporter. Not knowing Boesch’s whereabouts, the reporter entered the locker room, where a now clean Boesch was now standing, unclothed and un-Jewish. 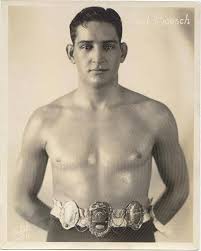 Paul Boesch’s opponent for the evening was Ivan Puddubny, but not that one. Pfefer had brought the real Puddubny, a multi-time world champion in Greco-Roman wrestling in 1926, packing houses across the country. It was Pfefer’s big break and helped land him a chair at the top table on eastern grappling.

The semi-final involved “Tiny” Roebuck, a 285-pound All-American football star from the Haskell Indian Institute. Roebuck, born Theodore Roebuck, was a popular attraction and would make the jump to the big screen, having small roles in Man About Town, Robinson Crusoe, and several other films.

The previously mentioned Herb Freeman, for his part, was considered one of the best grapplers in the area, and a constant title contender.

Another Pfefer name on the card is Leo Pinetzki, a Polish wrestler with freakishly long arms. He had made his US debut the previous year and was still a popular addition to any card thanks to his 81″ wingspan.

Here’s some more background information on Pinetzki from my Twitter:

Leon Pinetzki, renowned for his 81" wingspan, makes an impression on his debut, December 1931. #wrestling #History pic.twitter.com/I9QjrnELOi

Pinetzki’s opponent for the evening was Ivan Vakturoff, a hulking 225-pound brute from Riga, Latvia.

The final major star on the card is Sammy Stein, a former gridiron standout. Stein, another Jack Pfefer find, was a perennial contender for the World Heavyweight Championship, headlining cards at Madison Square Garden with Londos and Jim Browning. 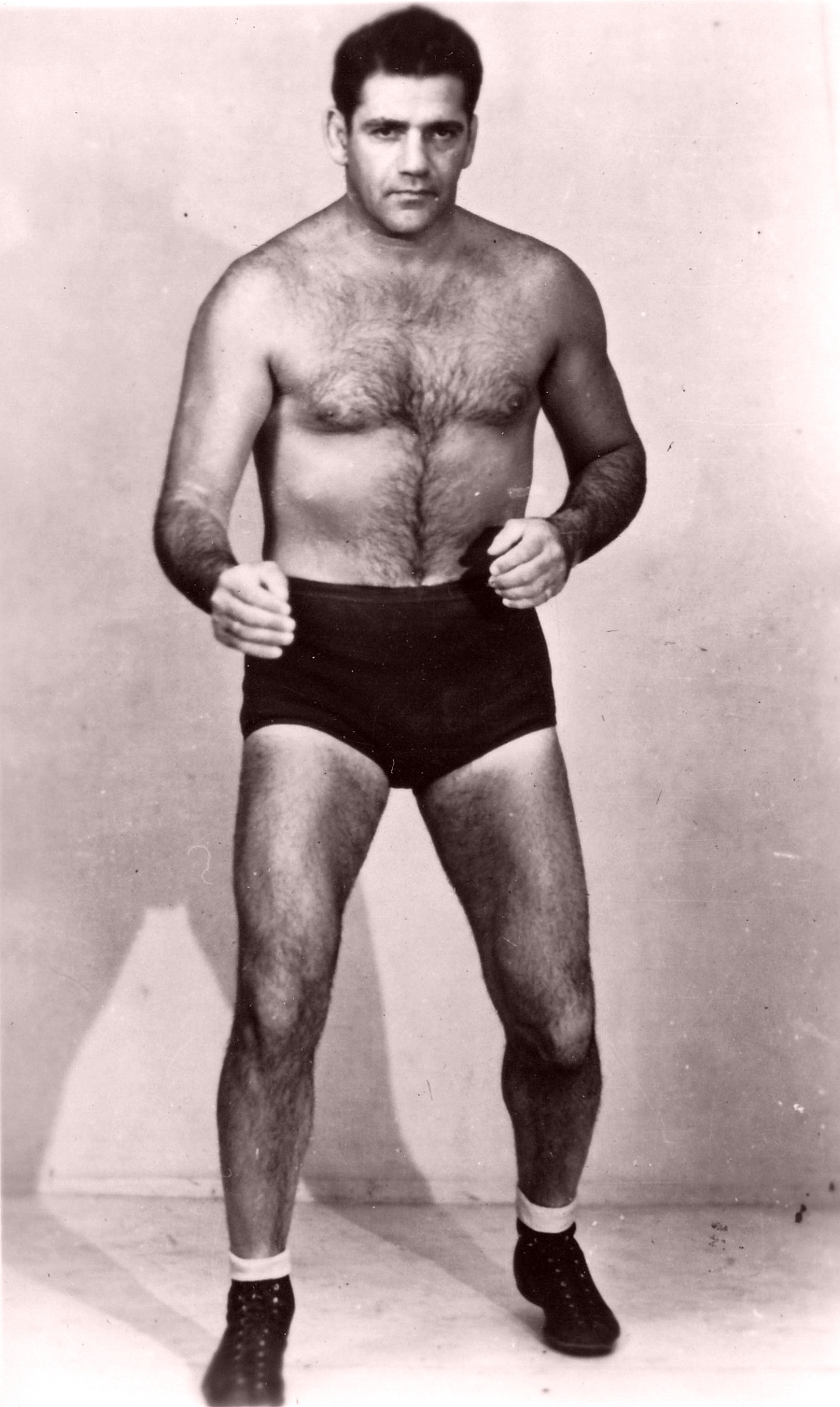 “A wonderfully built athlete,” Ring Magazine hailed the Jewish grappler, as a “sensation who has gained fame as a professional football star, a sprinter and a sand-lot baseball player and now aspires to fame in wrestling,” as detailed in this 2007 Slam article from Greg Oliver: MSG headliner Sammy Stein saw light in Hollywood.

Like Roebuck, Stein also made the jump to Hollywood, but found greater success thanks to his matinee idol good looks. He appeared in dozens of films, sharing the screen with the likes of Charlie Chaplin and Abbott & Costello.

It’s not just Jewish and European ethnicities drawing fans, however. This card also featured Wong Bock Cheung, a Chicago-born Chinese wrestler. Cheung, born Arthur Henry Wong Dock, was never a top draw in the US, but was nonetheless a solid mid-card act that would deliver an impressive performance.

Cheung’s burgeoning career was almost sidelined in 1932, however, when he made a trip to British Columbia and was detained under the Chinese Exclusion Act upon his return to Portland, Oregon. Held under suspicion of being Chinese-born and thus barred from entry into the US, the young Cheung turned on the charm and convinced officers of his Chicago birth some 25 years earlier. He would continue to wrestle through the 1930s, wrestling across the US, Hawaii, and New Zealand. 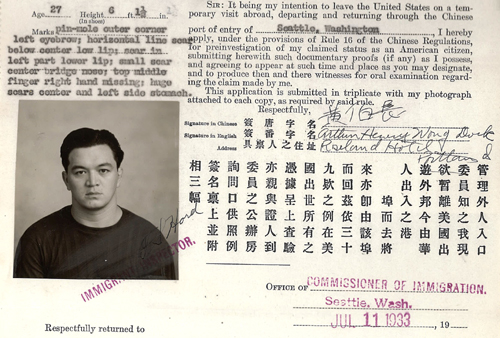 The remainder of the card is a collection of Pfefer and Curley regulars. All had fairly lengthy careers, but there isn’t much of note on which to comment.

This Curley card sits at the beginning of a major boom in the wrestling industry, one the business would not experience again until the arrival of television nearly 20 years later.

A major part of that boom is the prominent role that ethnic champions played in driving local communities through the turnstiles. In New York, the Jewish stars — names like Boesch, Stein, Abe Coleman, and Herb Freeman — packed houses across the city, and gave fledgling immigrant populations something to believe in: a local hero just like them. This scenario continued to play out in the city for years, with the likes of Bruno Sanmartino and Pedro Morales carrying the flag for their local community.

While the holiday is still a few weeks away, I want to wish a Happy Hanukkah to SlamWrestling readers across Canada, the US, and the wider world. חנוכה שמח! 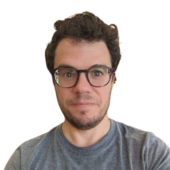