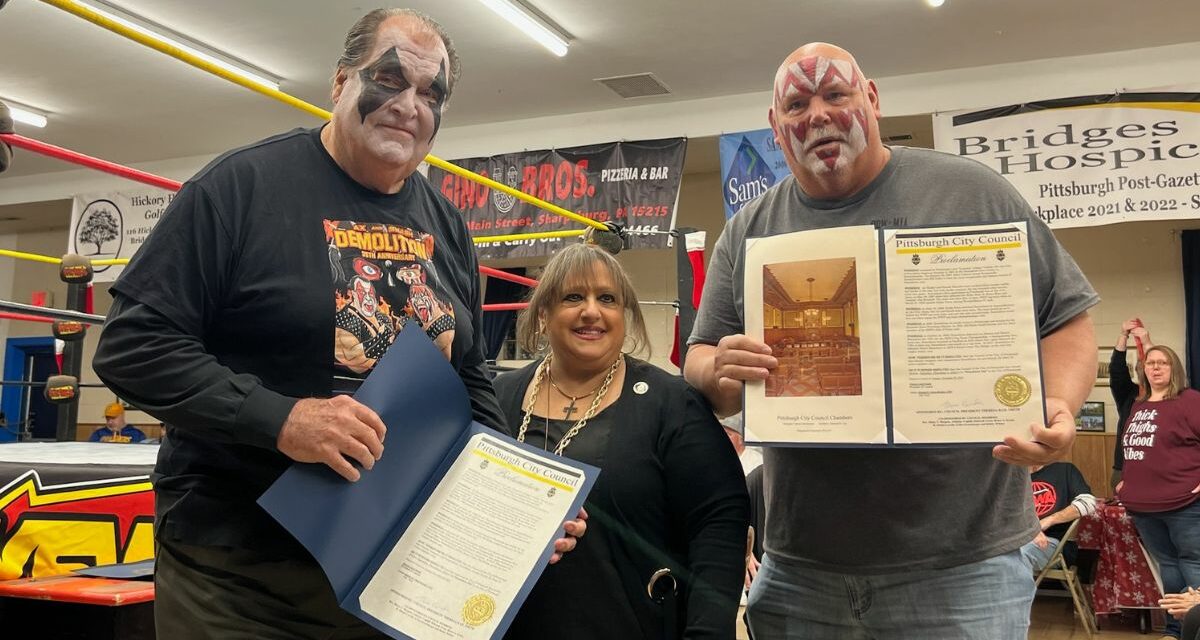 PITTSBURGH — Bill Eadie is not a stranger to Western Pennsylvania. A native of Fayette County’s Brownsville, he grew up about 40 miles south of Pittsburgh. He got his break working in and around Pittsburgh before moving on to other territories as The Masked Superstar and later, Demolition Ax.

For years, Eadie has lived in Atlanta, but routinely drove to Brownsville to visit his ailing father, who passed away a few years ago.

Barry Darsow is a life-long Minnesota resident, who just recently noted that he and his wife retired from their family business of printing labels on hard hats and other items and moving to Michigan to be closer to their son.

But on Saturday, December 3, the former three-time World Wrestling Federation Champions were surprised with “Demolition Day” in the city of Pittsburgh.

Pittsburgh City Council President Theresa Kail Smith was on hand for the Keystone State Wrestling Alliance’s annual FanFest/Toy Drive. She presented the vaunted tag team with proclamations that detailed their invention as a team and debut at the long-demolished Civic Arena near downtown Pittsburgh.

Ax and Smash were taken aback by the proclamation, with Darsow impressed with the details of the team besting B. Brian Blair and Jumpin’ Jim Brunzell – The Killer Bees – in their first trip through the northeast WWF territory in 1987. 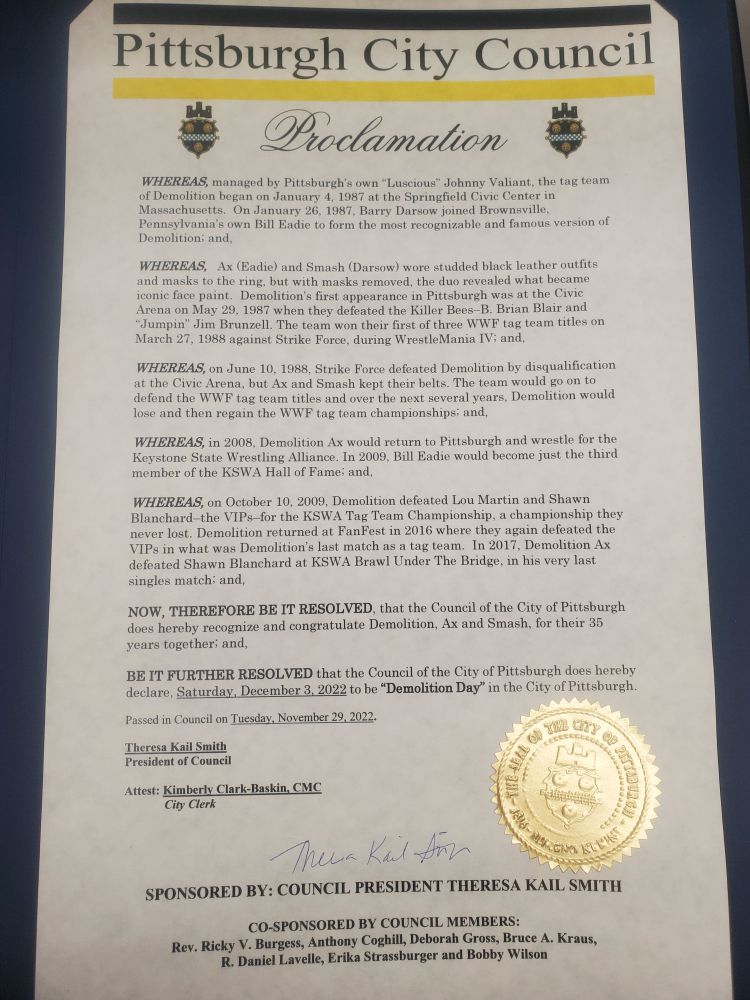 Eadie has been to the KSWA frequently over the years, beginning in 2008. In 2009, he was just the third inductee into the KSWA Hall of Fame, following only “Killer” Joe Abby and Frank Durso, who were best known from the 1958-1974 WIIC Channel 11 Studio Wrestling institution on Saturday Nights.

Eadie called on Darsow to team as Demolition to defeat Shawn Blanchard and Lou Martin – the VIPs – for the KSWA tag team championship in 2009. It’s interesting to note that Demolition’s last match as a tag team was held in Pittsburgh against Blanchard and Martin in 2016 and Eadie’s last go-around in a single’s contest was at Brawl Under the Bridge in July, 2017 against Blanchard.

After Kail Smith read the “Demolition Day” proclamation, the team was serenaded with a 35-second chant of “You Deserve It!” by the 300-plus in attendance.

Eadie noted that he was a Western Pennsylvania native and said it was a great honor and great to be back in Pittsburgh. He congratulated the fans for supporting FanFest and the Toy Drive. Darsow added, “What an honor, thank you,” as he turned to the excited crowd. “We’ve wrestled all over the world, Japan, Europe, Australia, Canada and the fans here, in this town, are incredible. You guys in Pittsburgh are unbelievable. Thank you. You are the greatest fans around.”

Darsow noted that he hadn’t received a local proclamation like this, and had plans to mount it on a wall in his new home.

KSWA FanFest/Toy Drive has collected thousands of toys since 2005 for needy children throughout Pittsburgh and Western Pennsylvania through the Allegheny County Holiday Project.