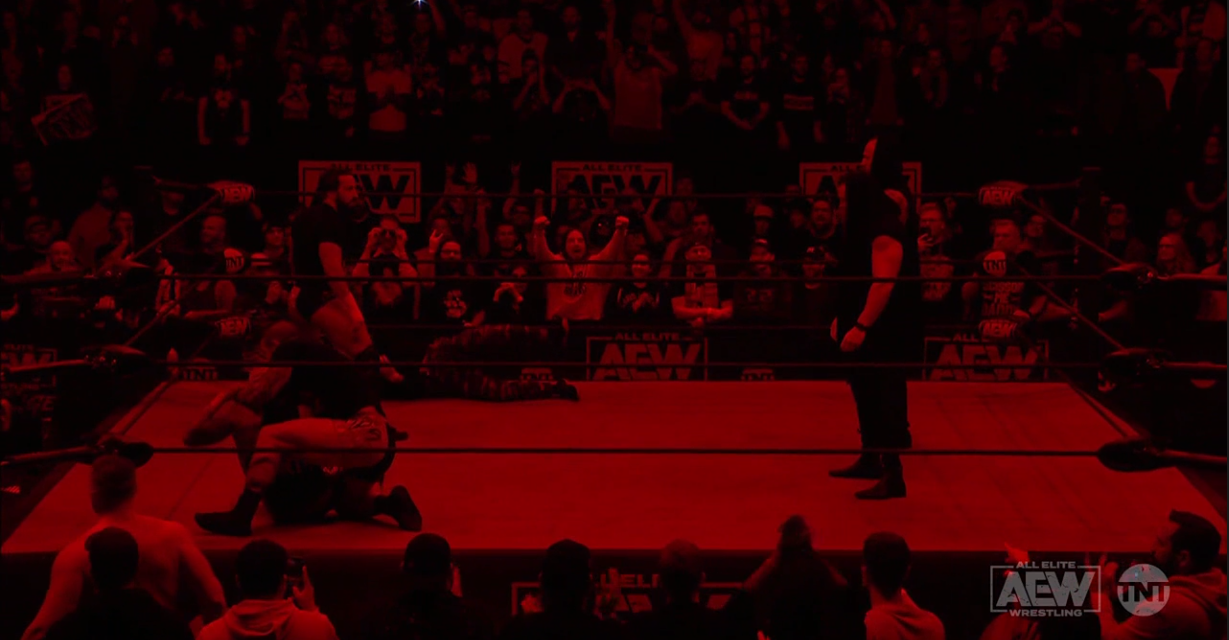 AEW Rampage has been on the air for well over a year now, but the question still lingers; what is this show? It is almost always taped after Dynamite, because who would go to a one hour tv taping? (See Atlantic City) The matches are almost never between top talent, although they do always seem to have a title defense. Ask yourself though, is the title being defended ever really in danger of changing hands? Let’s get to the action.

Allin has Sting stay behind. Nick Camarado charges Allin, who just dispatches him with several shots from the baseball bat. Allin drops the bat and wipes out Karter with a suicide dive before the bell. The match finally starts and Allin drop kicks Karter into the corner and to the floor. Allin gets caught up top and falls awkwardly on the apron. Karter power bombs Darby into the ring apron. Cole whips Allin into the turbuckle and follows up with a buckle bomb. On the floor, Karter sends Allin crashing into the ring steps.

Back in the ring, Karter drives knee shots into Allin’s mid-section. Karter misses a splash in the corner, but then catches Darby with a high knee strike. Allin fight back with a chop black, but then runs into a back elbow strike. Allin with a Canadian Destroyer, but can’t get the pin. Karter catches Allin on the top turnbuckle and takes him down with an avalanche falcon arrow. Karter goes up top only to crash and burn on a 450 splash. Allin hits the scorpion death drop and goes up top. He connects with the Coffin Drop and covers to get the win.

Renee Paquette welcomes the AEW tag team champions, The Acclaimed, to the ring. She asks them what’s next. Bowens isn’t happy that Jeff Jarrett and Jay Lethal interrupted them last week. He knows they want a shot at the titles, but they have to wait in line. There’s a team that has been waiting a long time for a shot at the titles. The people want the Acclaimed to fight the best, but the Gunns come out. Jay Lethal, Jeff Jarrett and Sonjay Dutt confront them on the ramp. Dutt is going to show them that they are the best by beating Private Party. Billy Gunn shuts them all down. The Acclaimed want the best; enter FTR. They shake hands with the AEW champs in the ring.

The commentary team talk anout the upcoming Dynamite Diamond Ring Battle Royal, so even they don’t care about this match. Jarrett hold Mark Quen allowing Lethal to hit him with the Lethal Injection.

Renee Paqette had a sit down interview with Saraya. She feels great and was so happy to have her brother at Full Gear to support her.

Athena makes short work of Mo. She slams Mo in the mat and then pulls her up out of the pin. Athena gets in the refs face, almsot costing her the match. Athena power slams Mo and finishes her off with a kick to get the pin.

After the match, Athena dumps Mo out of the ring the hard way. She continues to beat on Dani on the ramp and then crushes her against the ring steps. AEW officials finally get her to back off.

Juice Robinson issues a challenge to Samoa Joe for the RoH TV title at Final Battle.

QT Marshall has requested a lumberjack match do there won’t be any shenanigans. Marshall isn’t amused that Danhausen and Best Friends are dressed as actual lumberjacks. Mark Henry informs them that they are not allowed to bring axes to the ring.

Darby Allin has finished settling scores and now he wants the TNT title back.

Cassidy ducks Marshall’s attacks and then goes over the back. Orange connects with a drop kick. Well, these lumberjacks aren’t doing a good chop and the two fight on the floor. Finally back in the ring, QT hits a back breaker. Cassidy spills to the floor, where Matt Hardy helps Orange back into the ring. Ethan Page wanted them to put the boots to him, and orders Hardy and Private Party to the back.

After a commercial break, Orange is fired up. The Factory hits the ring, but the Best Friends take care of them. Cassidy hits Stundog Millionaire. Orange blocks a Diamond Cutter, but can’t hit the Beach Break. Cassidy counters a powerbomb with a hurricanrana and follows with a DDT. Cassidy wants the Orange Punch, the Factory pull their boy out of the ring. Marshall catches Cassidy with an enzuguri and wants a pile drive on the apron. Danhausen curses Marshall. Orange hits the Beach Break on the apron and then takes to the air to take out everyone on the floor. Penelope Ford jumps to the apron. Kip Sabien shoves Orange off the turnbuckle into a Diamond Cutter. Cassidy kicks out. QT wants another cutter, but runs right into the Orange Punch. Cassidy hits the Beach Break and covers to get the win.

After the match, Orange Cassidy hits Sabien with a flying head butt. The lumber jacks start to brawl and the lights go out. A red light bathes the arena and the House of Black attack everyone. Serpentico takes a Dante’s inferno. The show goes off the air with the House of Black wrecking everyone.

Usually wrestling can carry Rampage, but not tonight. The best part of the hour was the promo form the Acclaimed.