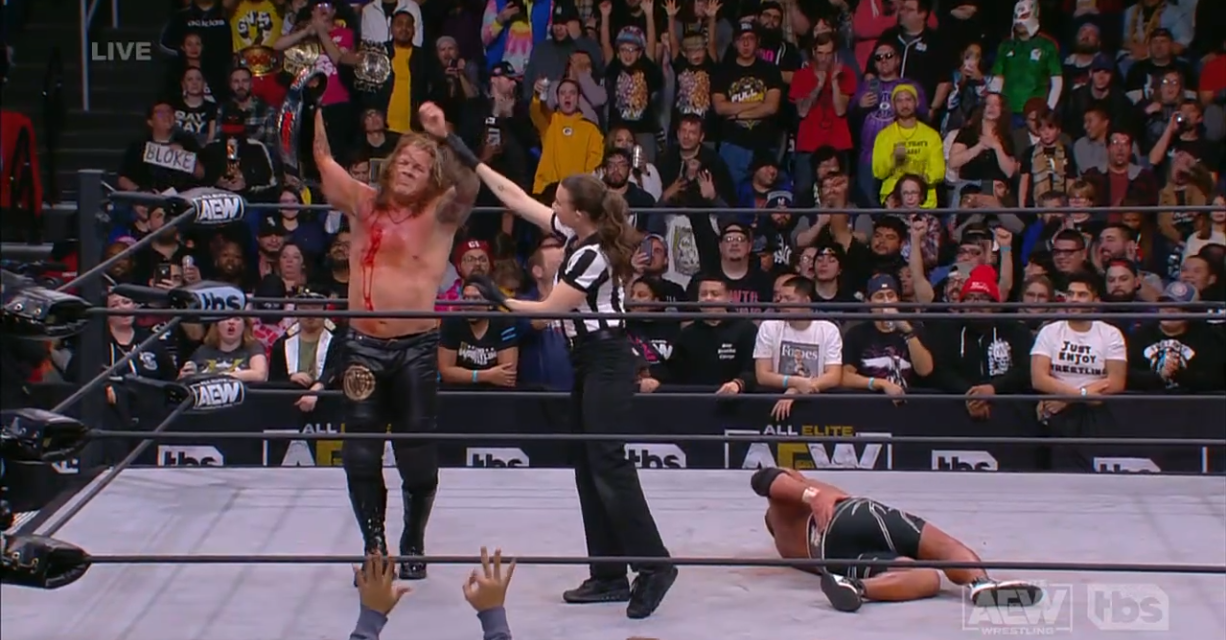 The MJF Era has begun in AEW, but there are some lingering question coming out of Full Gear. What is the status of the Blackpool Combat Club now that Jon Moxley is no longer champion and William Regal turned on the champ; helping MJF to victory. Dynamite is in Chicago, tonight, so expect a raucous crowd. Let’s get to the action.

Regal doesn’t make us wait, standing in the ring to open the show. The crowd showers him with boos and jeer even louder when they find out MJF will not be on the show this evening. MJF is on the set of a major motion picture. Regal informs us that the champ will be here next week.

Jon Moxley also wants an explanation, heading to the ring. Bryan Danielson intercepts Mox in the ring before he can do anything to Regal. Danielson tries to keep the peace. Bryan knows Regal did a bad thing, but haven’t they all done bad things. He doesn’t want Mox to hurt Regal who has multiple health aliments. Danielson slaps Mox across the face, then gets on his knees and begs for the former champ to listen. Bryan owes Regal for making him understand his own father’s struggles. Danielson tries to appeal to Mox as a father and then asks for Regal to be spared as a favor to him. Mox stares Regal down, telling him he only wants one thing from him. He wants Regal to run as far away as he can and never come back.

Renee Paquette tries to get a word with Keith Lee. Swerve Strickland interrupts. Lee tells him to choose he words wisely. Swerve puts his hand over the camera.

The champ opens with the kicks and follows with a drop kick. Orange knocks off Jake’s hat in the corner and Hager is not happy. A low bridge sends the challenger to the floor. Orange grabs the hat, as the JAS try to take it from him. Daniel Garcia recovers the hat, but gets yanked off the apron by Rocky Romero. Hager catches Orange on the floor and drops him off the side of the ring apron.

After a commercial break, Cassidy skins the cat. Hager tries to kick him off the apron. Orange lets go off the ropes falls back into the arms of the Best Friends. Cassidy takes out the JAS with a moonsault and then goes up top. Hager catches the champ, but Cassidy counters with the Stundog Millionaire and follows up with a DDT. Hager kicks out at two. Cassidy looks for the Orange Punch, but Hager catches him and slams the champ to mat. Orange gets his feet up early on the Hager Bomb, so Jake is able to counter into an ankle lock. Hager releases the hold to get his hat. Cassidy with the Orange Punch and use a victory roll to the get the pin.

QT Marshall and the Factory walk out on stage. He says they have unfinished business and surround the ring, as QT’s microphone cuts out. The arena goes black. When light returns, Julia Hart is standing on stage bathed in a red light. The House of Black hit the ring and lay waste to Best Friends, Orange and Rocky. Then they take out the Factory. Security runs down and they get taken out. Brody King hits a security guard with Dante’s Inferno on the top of the ramp.

After a commercial break, Page slams Starks onto the top rope. Starks fights his way off Page, sending him to the floor. Ricky crashes on a suicide dive after Stokely Hathaway pulls Page out of the way. The ref ejects Hathaway from ringside. Page rolls Starks into the ring and goes up top. Starks is able to catch him up top.  The two trade blows on the top turnbuckle. Ricky delivers a superplex. Starks unloads with right hands to the jaw and hits a swinging neck breaker. He follows with a DDT, but Page is able to kick out of the pin. Page fights out of a Rochambeau, hitting a power slam. Page cannot get the pin. Starks drops down out of the Ego’s Edge. Page catches Ricky with a roundhouse kick. Starks hits a spear coming off the ropes. Starks hits one more spear, covers and gets the three count.

Starks will face MJF for the AEW World Heavyweight championship at Winter is Coming.

Wardlow is upset he lost the TNT championship and want back to watch the video from Full Gear. He lets Samoa Joe know that this is still Wardlow’s world.

Jade Cargill has no comment on the Bow Wow situation. She’s happy that she go her belt back, with no help at all though. They’re going to celebrate next week. Mark Sterling delivers the official statement of “No comment”. Sterling then informs Keira Hogan that her services as a baddie are no longer needed. Come on, man, firing her right before the holidays! Not cool.

Omega lays out Rey Fenix and all 6 men hit the ring. Pac and Penta are powerbombed into the apron as Kenny Omega hits Fenix with a spinebuster. This match is chaos. Kenny Omega taunts the crowd with a go to sleep. Fenix hits Kenny with a cutter. All three members of Death Triangle hit Omega with superkicks and then the Risky Business combination. Pac catches a back elbow. Nick kicks Pac in the face from the apron and Matt goes up top. A moonsault takes out Rey and Penta. Pac and Omega trade blows in the ring. Kenny hits a bulldog. This crowd is trying there best to get a CM Punk chant going and the Elite are just egging them on with taunts.

After a commercial break, Nick yanks Penta off the apron so he can’t make the tag. Kenny bites the arm of Pac. Omega runs into a German suplex. Penta with cross body taking out the Bucks. He hits Matt with a DDT and then delivers back breakers to all three Elite members. Fenis with a hurricanrana on Nick off the top rope. Matt hits  super kick but Fenix kips up and super kicks him back.

Omega hits Pac with a V trigger to the back. The Bucks kick Penta and Rey off the apron. The Bucks rip off the mask protecting Pac’s broken nose. They hit the BTE Trigger, but Rey and Penta break up the pin. Nick Jackson flies over the top rope to take out the Luchas. Omega has Pac in his sites and connects with the V Trigger. Pac fights out of the One Winged Angel. Omega hoists up Pac and his the GTS. Pac kicks out. Omega is frustrated and Matt tags in. Fenix takes out Nick on the apron and sends Omega to the floor. Fenix catches them with a suicide dive. Pac takes Matt to the ropes and hits a low blow with a donkey kick. Matt has the ring hammer, but doesn’t see Penta with one of his own. Penta nails Matt with the hammer, allowing Pac to get the pin.

Renee Paquette announces that Thunder Rosa is officially relinquishing the AEW Women’s title. Jamie Hayter is now the AEW Women’s world title and Toni Storm is having the interim title stricken from her reign that ended Saturday. Renee asks Jamie about her feelings, but Britt Baker takes the microphone. Baker does all the talking before they head to the ring.

Everyone wanting tension between Hayter and Baker, now that Jamie has the belt, will be disappointed. Hayter and Baker work like a well oiled machine in this match. Hayter breaks up a pin of Skye Blue on Ana. Willow with a Death Valley Driver to Melo. Hayter breaks that up. Melo super kicks everyone. Baker prevents a Code Blue. Jamie hits the Hate Breaker and Baker finishes off Blue with a stomp. She covers to get the pin.

FTR is impressed with Top Flight. Top Flight challenges FTR to a match for the RoH tag team title. They accepts.

The AEW World Tag Team champions are in the house. Caster drops some bars about Full Gear. Billy Gunn shows that his hands a fully healed, so it’s scissoring time. Sonjay Dutt, Jay Lethal and Jeff Jarrett interrupt from the backstage. They aren’t pleased that Max dropped some bars on them. Gunn has the video feed cut because it’s scissoring time!

Jericho flips the double bird to the Chicago crowd. Ishii slaps Jericho across the face. The two trade slaps. A boot from Ishii sends Jericho retreating to the floor. Tomohiro is savvy enough not to engage Jericho on the floor. The two trade forearm strikes. Ishii with a suplex but misses a sliding lariat. Ishii blocks the Code Breaker. The two collide with shoulder blocks, with Ishii finally taking Jericho off his feet. Now the two trade chops in the middle of the ring.

After a commercial break, Jericho’s chest is a bloody mess as the two kept chopping at each other during the break. They chops keep coming. Ishii takes control, striking Jericho into the corner. Ishii explodes out of the corner with a lariat. Jericho forces Ishii into the corner and beats him down. Jericho mounts Ishii in the corner and rains down blows. Tomohiro power bombs Jericho, but can’t get the pin. Ishii runs into a kick and Jericho hits cross job. An elbow strike stops Jericho in his tracks. Jericho hits a DDT on the apron.

The two return to the ring, just wailing on each other. The two trade suplexes. Ishii collapse and Jericho hits a lionsault. Tomohiro kicks out  of the pin. Jericho hits a Code Breaker. Ishii kicks out again. Tomohiro blocks the Judas Effect and hits a running head butt. Jericho kicks out of a pin after a sliding lariat. Jericho sweeps out the legs, but can’t get Ishii over for the Walls. Tomohiro with a Code Breaker and follows with a massive lariat that only gets a two count. Jericho blocks an enzuigiri and locks in the Walls of Jericho. Ishii tries to crawl to the ropes. He rolls through, but Jericho applies the Lion Tamer. Ishii flips Jericho off, but then taps out.

After the match, Jericho starts to threaten Ian Riccaboni. Claudio Castagnoli walks out and decks the champ. That’s the show. See you in seven!

AEW delivered a buffet of wrestling fit for Thanksgiving. The Elite and Death Triangle wrestling every week for the next five weeks is not  a bad things. I could ding the show for MJF not appearing, but honestly the matches were so good, I didn’t even miss him as the show went to black.