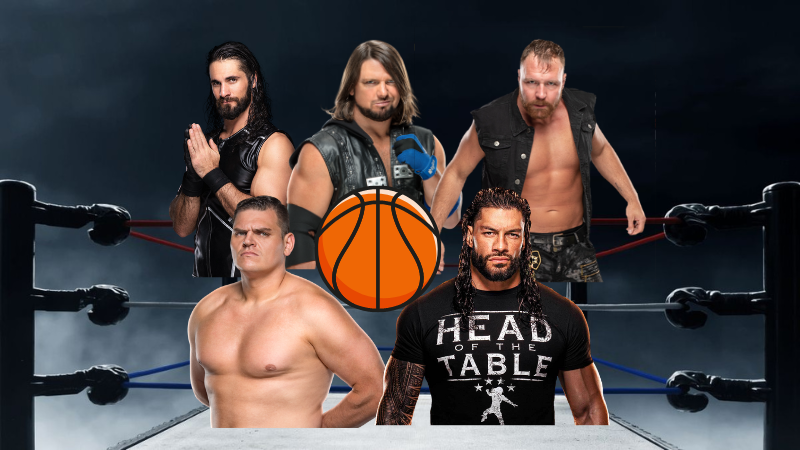 With the 2022-23 NBA season underway, what better way to apply my devout fandom of both basketball and pro wrestling than by visualizing a world wherein wrestling had a five-man lineup? For those of you who are unaware, the standard basketball team is comprised of players characterized by a set of five positions. These positions comprise of point guard, wherein this player assumes the role of being the primary ball handler, dribbler, and passer. The shooting guard whose role is to pose as the outside shooter and provide reliable offensive prowess. The small forward position is the smaller of the two forwards with a capable scoring threat, agility, and strong defensive efforts. The power forward position is a larger forward who uses their considerable size and strength to grab rebounds and act as a secondary defensive dynamo near the basket. Finally, we have the center position whose role is to be the main defensive anchor as the generally tallest, bulkiest player on the court, taking charge of blocking shots and catching high passes from the point guard.

And with that being said, I present to you pro wrestling’s own version of the “Dream Team” with the best wrestling has to offer if they were entrusted in positions similar to the common basketball lineup! Note that I didn’t base it all on height … I mean, who wants Omos in their starting lineup in pro wrestling?

Leading the pack at point guard is the man known as “The Visionary”… Seth “Freakin” Rollins! He has shown throughout his entire wrestling career that he can lead as the primary face of a company or be a franchise player. Early on in his career, Rollins fka Tyler Black in Ring of Honor carried the ROH World Championship throughout 2010 and put on absolute wrestling showcases against adversaries such as Roderick Strong and Davey Richards. As the man formerly known as Tyler Black then became known in the world of WWE as Seth Rollins, he turned his attention to rivals such as Dean Ambrose and John Cena. Rollins reached the pinnacle of sports entertainment success as a multi-time WWE World Champion and Universal Champion. With his years of experience and acting as a focal point in every company he has worked for, Seth “Freakin” Rollins acts as the best-suited candidate of point guard in the pro wrestling world. 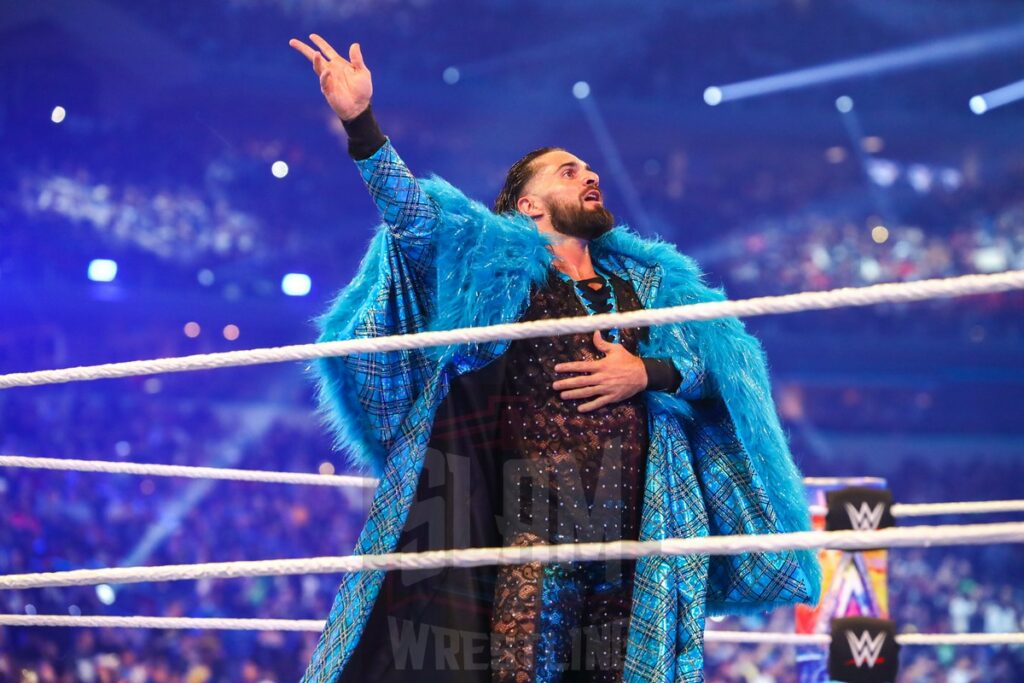 Taking the position as shooting guard is “The Phenomenal” AJ Styles. A constant workhorse with an exceptional ability to put on high-quality performances, AJ Styles has long been regarded as one of this generation’s greatest talents! Whether he was in his twenties or even now into his forties, Styles maintains living up to his moniker of “The Phenomenal” as he’s battled such greats including Samoa Joe, “The Fallen Angel” Christopher Daniels, Jeff Jarrett, Shinsuke Nakamura, and John Cena. Styles’ work rate is matched by very few in the wrestling world as we’ve seen him evolve from a risk-taking high flyer to the ring veteran technician he is now. As Byron Saxton said when Styles made his WWE debut at the Royal Rumble in 2016, “a master of offensive innovation.” For that reason, AJ Styles serves as the perfect wrestling counterpart to the shooting guard position! 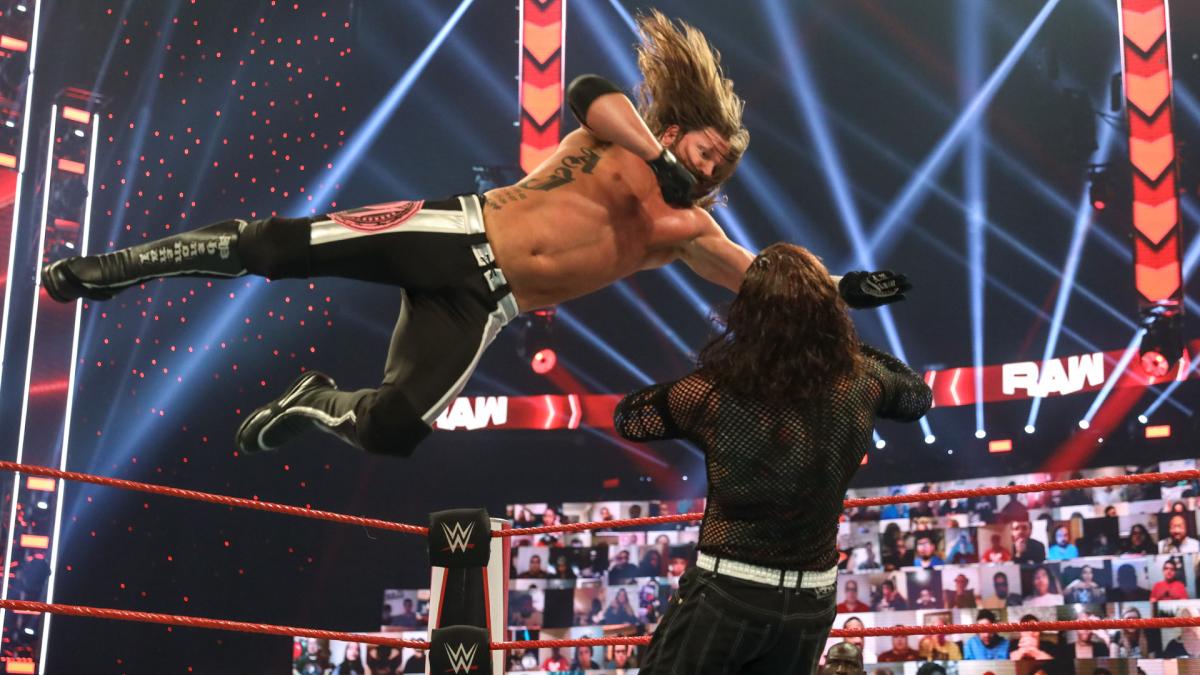 AJ Styles connects with the Phenomenal Forearm on Jeff Hardy to qualify for team RAW. Photo courtesy of WWE.com

At the small forward position is the current, reigning, and defending AEW World champion, Jon Moxley. His time as Dean Ambrose in the WWE may have watered down the true potential of the man we know now, but Mox has long proven to be a versatile talent both in his early career and as AEW’s current franchise player. After the Shield split in 2014, Mox/Ambrose served as one of the WWE’s most popular talents for several years, despite some of his character’s wishy-washy booking decisions and campy on-screen persona. Regardless, Moxley made the most out of his WWE career, becoming a Triple-Crown and Grand-Slam champion in his time with the company. Later on, as he resurrected the Jon Moxley persona in NJPW and AEW, Mox has shown to be one of the most reliable talents on showcase as he’s carried the IWGP United States championship on two occasions and held the AEW World championship for a record three reigns. As one of AEW’s top talents, Moxley has shown he can carry a heavy load on his back and defend the company he works for with all his heart. In the aftermath of the Punk-Bucks/Omega debacle, Moxley has been entrusted to lead AEW in their absence, and he takes this role with pride. In a way, you could say Mox is pro wrestling’s “glue guy” or “Mr. Swiss Army Knife” because of his efforts in the business. For these reasons, Jon Moxley is the ideal candidate to run the small-forward position. 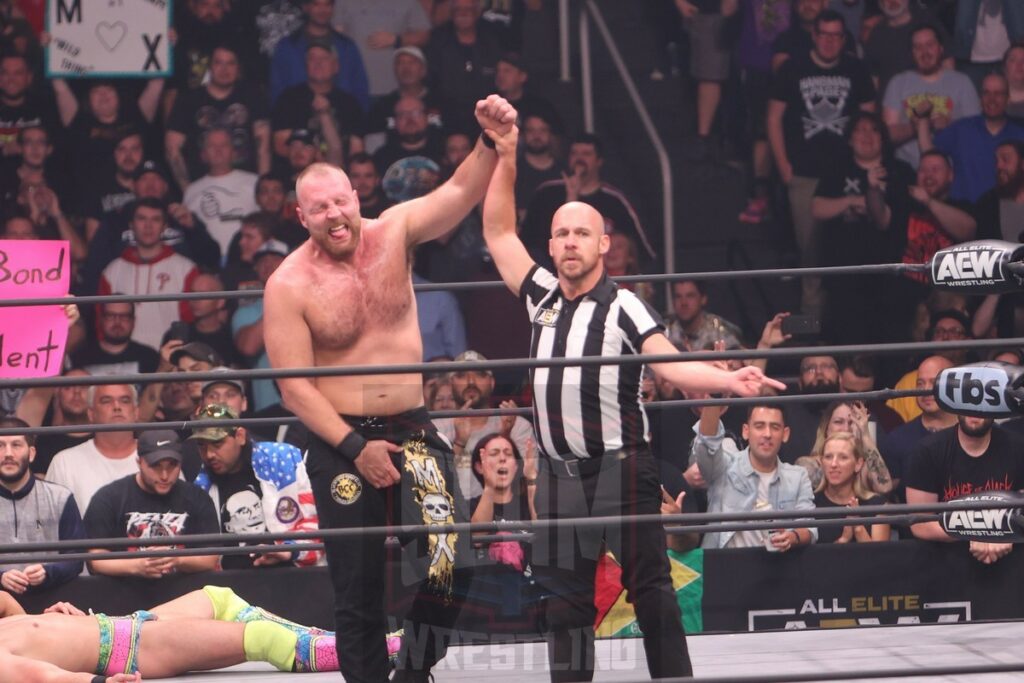 At the power forward spot, is the current, reigning, and defending WWE Intercontinental champion, “The Ring General” Gunther. Gunther defies the idea of big men in wrestling as he shows time and time again that he can certainly live up to the agility and high-risk maneuvers seen in athletes much smaller in size than him. A master of hard-hitting offense and brute force in the ring, Gunther often towers and overpowers his opponents with crafty ring generalship. By no means a ‘giant’ in the world of wrestling, Gunther has evolved in recent years as a more lean, yet still mean, catch-as-catch-can pro wrestler. Despite his new look, Gunther continues to carry over his classic moveset and attributes when he was once known as WALTER. Gunther may be a heavy hitter but he can also adapt to fast-paced action, which is a perfect description for Gunther taking the role of power forward in this fantasy lineup. 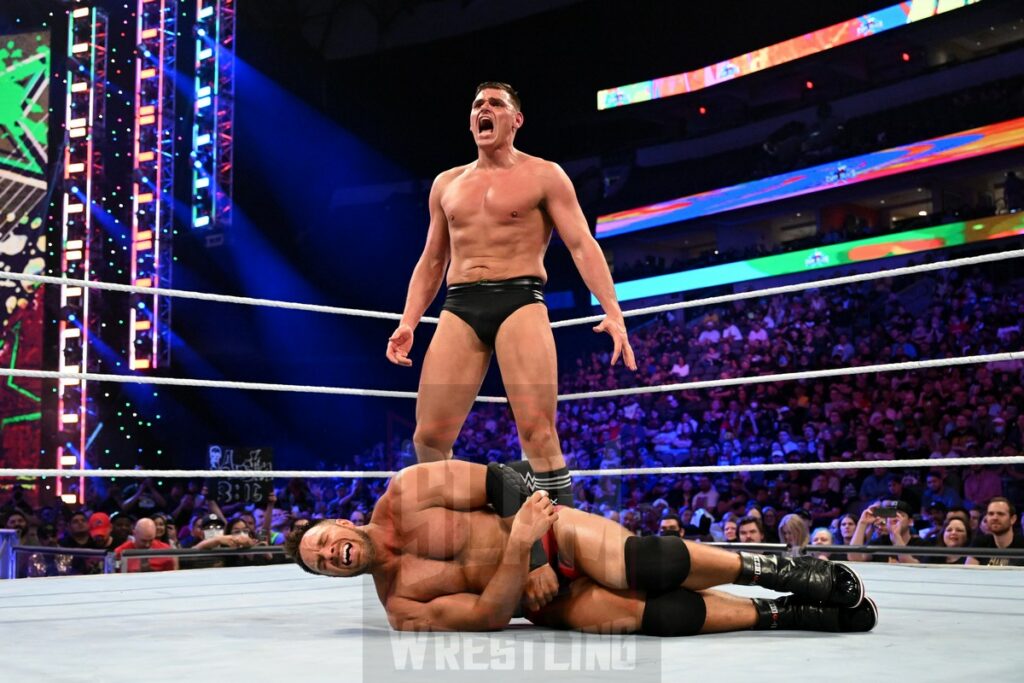 I discussed his former Shield brethren in the previous entries, but now we get to the last ex-Shield member at the center position in “The Tribal Chief” Roman Reigns. In his time with the Shield, Reigns served as the powerhouse and muscle of the trio. Reigns would often provide an intimidating presence amongst his Shield brothers and take care of business when his services were most needed. Later on in his WWE career, Reigns became known as the “Big Dog” as he rose atop company brass holding the WWE World Championship and Universal Championship on multiple occasions. However, in 2020, we saw the ex “Big Dog” evolve from unlikeable hero to monster villain as Reigns took front and center in the WWE as the newly christened, “Tribal Chief” and “Head of the Table”. This new found persona and unstoppable aura skyrocketed Reigns to Universal Champion within a few weeks of his Summer 2020 return, wherein Reigns has held the Universal Championship for a record 770+ days and counting. Reigns is an extremely dominant force that can run through anyone who comes in his path, and its for this reason he earns the rightful spot at center in this fantasy lineup. 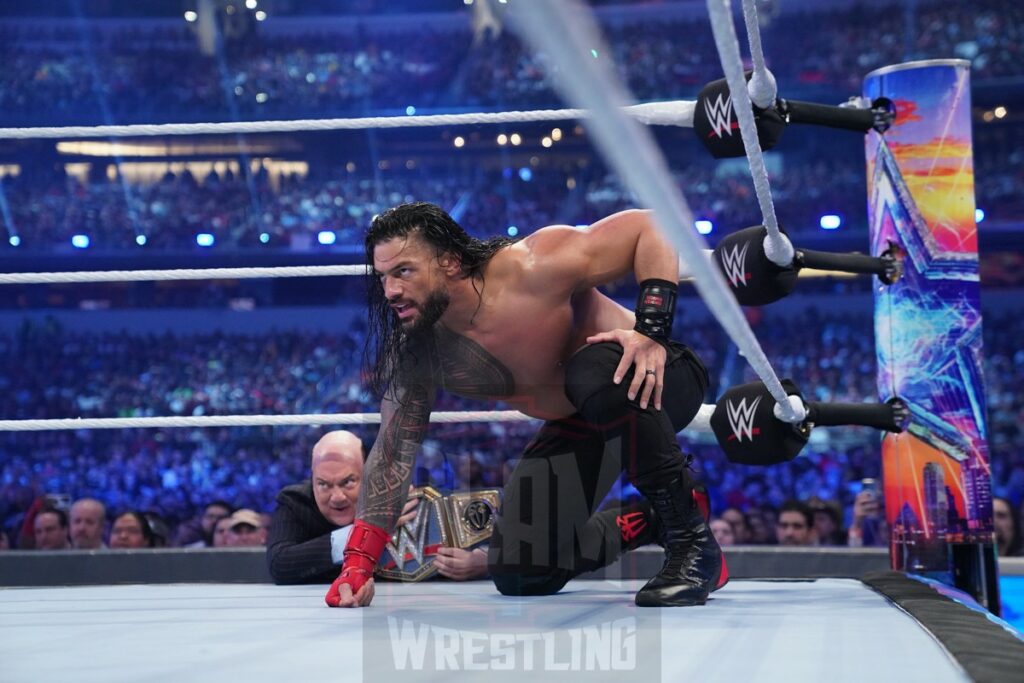 And now.. time for some bonus additions!

Before I get into our candidate, let me briefly describe the role of a “sixth man“. In basketball, the sixth man serves as a player who is not necessarily a starter, but plays primary minutes off the bench, and is typically the first to enter the court when starters begin to rest. The sixth man is largely seen as a reliable spark plug who can come into the game playing starter-caliber minutes and is expected to produce at a level to the degree of his starting counterparts. When a basketball team has a strong sixth man in their lineup, it speaks highly of a team’s depth and well-roundedness.

And so, at the “sixth man” position, we have a storied veteran with years of championship experience across a wide array of promotions… “The American Dragon” Bryan Danielson! When Danielson first burst onto the scene in AEW back at All Out 2021, many thought his subsequent trajectory in the promotion would see him as a primary staple of the world title/main event scene. Despite his main event success in WWE, Danielson has yet to see considerable success in AEW to the degree of his past accomplishments. Sure, it has only been a year into his AEW run, but it seems like Danielson poses as a reliable workhorse, ring veteran, that AEW can rely on to work with just about anybody… whether that be young upstarts or fellow veterans like himself. “The American Dragon” has reached that stage in his career where he may not be that “top guy” anymore, but you can sure as hell expect he’ll show up at 100% in any circumstance. Just like the sixth man does in a traditional basketball lineup, you can expect Danielson to serve as that extra boost of trusted offense and production, despite being a main-event star in a past life. Not to throw any shade on Danielson’s current status, but he displays all the traits to serve as “sixth man” in this fantasy lineup! 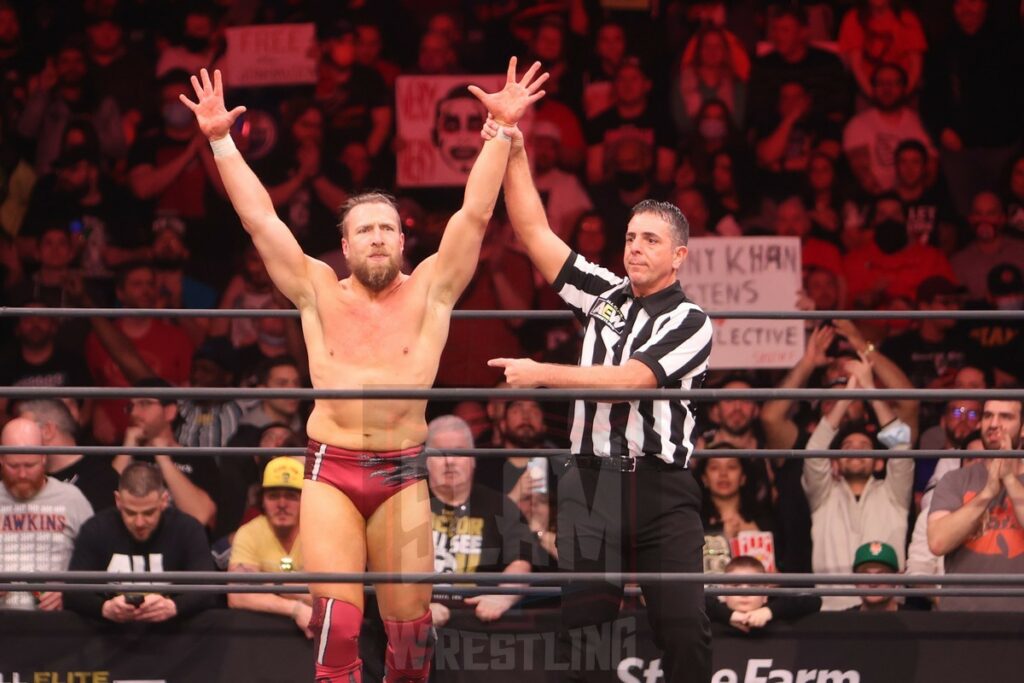 Rookie of the Year – Daniel Garcia

This selection came pretty quickly to my mind when I thought of wrestling’s version of rookie of the year… who better to choose than Mr. “Red Death” himself, Daniel Garcia. One of my favourite young talents/prospects in pro wrestling today, you cannot deny the star of Garcia shining bright in his short, yet impactful run in AEW thus far. Signing with the promotion late last year, Garcia has found himself in prominent positions with AEW as a member of the Jericho Appreciation Society and prolific matchups against CM Punk, Bryan Danielson (who I shined a spotlight on previously), and Jon Moxley. He reached further success with a big win in his hometown of Buffalo, defeating fellow rising star Wheeler Yuta to capture the ROH Pure Championship. For a while also, it seemed that Garcia was poised for a face turn as he showed dissension in his relationship with Chris Jericho and slowly turned his interest under the shadow of Bryan Danielson. Garcia later showed his full allegiance to Jericho, cementing his heel status in the meantime. Whether working against the fans or for them, Garcia has shown to be a real throwback to some of wrestling’s past mat technicians and getting to showcase some of his charisma alongside Jericho’s guidance. For these reasons, I select Daniel Garcia as my “rookie of the year” in this fantasy lineup! 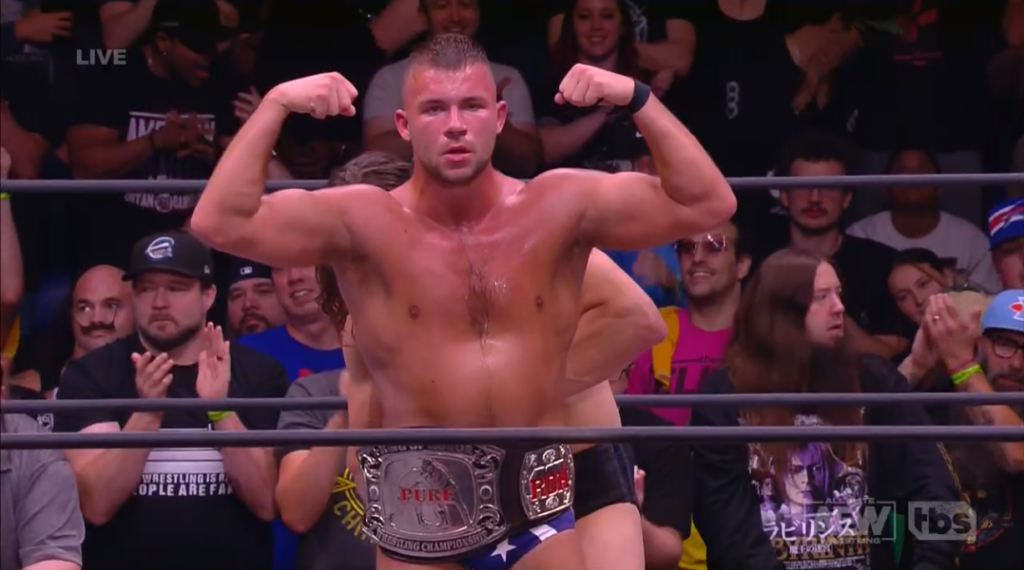 In the world of the NBA, the allure of building “super teams” have led many franchises to put all their eggs in one basket. When these “super teams” fail to produce at the expectations of many, it shows that simply compiling a team comprised of megastars is not necessarily the key to success. In this fantasy basketball lineup comprised of pro wrestling counterparts, each of these men are ‘superstars’ in their own right (some literally and figuratively) but I wouldn’t classify this to be a “super team” per se. Each wrestler serves a particular purpose in the ring, bringing a unique sense of individuality to create the ultimate, well-balanced team. Whether you see them as a super team or not, I’d view this lineup to mimic that of my hometown Toronto Raptors (Go Raps!). When you look at the team from top to bottom, there is no single superstar that overshadows the others, but a lineup balanced from top to bottom with notable talent.

Hey, if fantasy wrestling was a thing like fantasy basketball or fantasy football is, I might be well off putting all my eggs in one basket when it comes to this lineup… I’d be pretty confident in my chances of taking the trophy home!