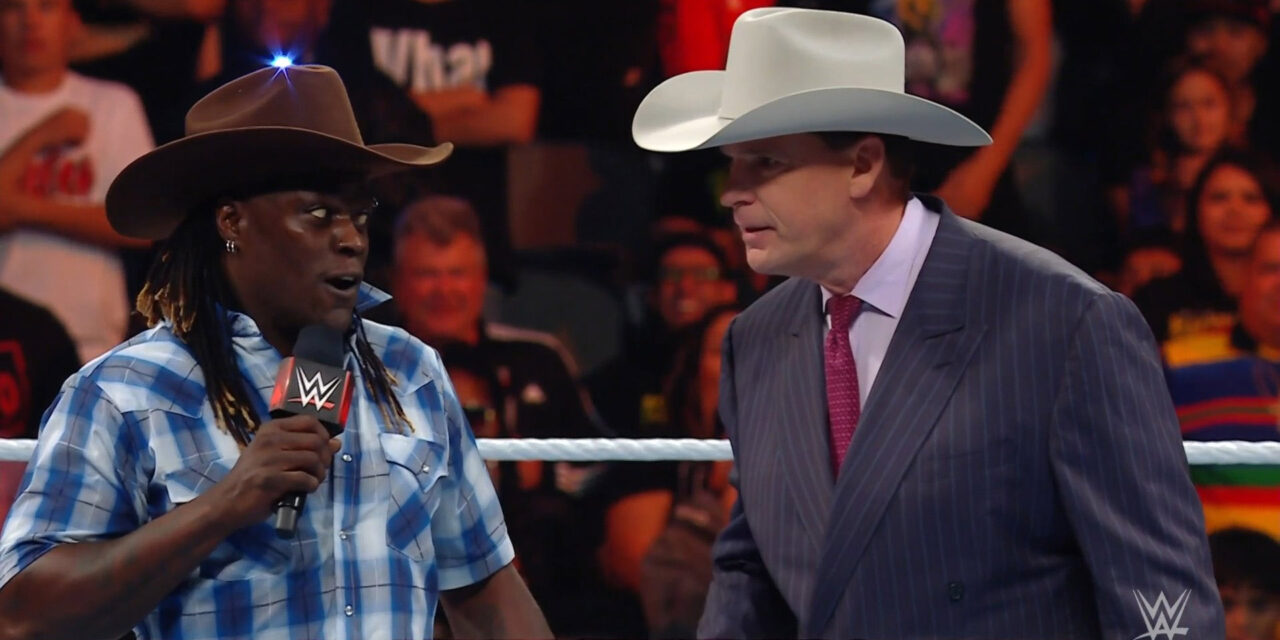 It’s Raw. It’s Halloween. You know what that means…

Raw goes right into the action. Nikki, if you missed last week, is back to her crazed ways. There’s little sense in her going straight into a match against the champ, especially going into a title defence.

Action is pretty intense tonight as Cross has a lot to prove, but late in the match she looks a bit gassed. In fairness, she hasn’t had a singles match in ages.

When both ladies are laid out at ringside, Damage Control runs out, with Kai-n-Sky (indeed!) distracting while Bayley launches an assault on Belair. Cross fires back and swipes anything moving. I guess she’s a tweener.

As expected. KOD gets the W for Belair.

After the bell, Damage Control enters and again assaults Belair until Asuka and Alexa Bliss return to even the odds. Yep, Cross has been buried in record time.

Back from break, Cathy Kelley gets comments from the face trio of ladies. Bliss and Asuka demand a Women’s Tag Team Championship match tonight.

Corey Graves starts what’s supposed to be a face-to-face (in separate rooms) between Bobby Lashley and Brock Lesnar. Lashley’s there to start and cuts a decent heel promo until we hear Lesnar’s music in the arena. Lesnar quickly calls Lashley out for a physical confrontation in the ring, and Bobby obliges. A pull-apart, led by Triple H, takes place. It’s ineffective though, as one might expect.

I guess Rollins is the face in this match?

Rollins is sporting some blonde locks for the first time since his days in The Shield. It’s an interesting remix.

The match is fine and all, but guess what folks, we’re 2 for 2 on commercially-interrupted matches.

Decent reversal sequence with a bit of ingenuity for a change, leads to A-Town Down for a near fall. Standing Blockbuster nets the same result.

Match is really picking up, and I wish even more that we didn’t have a commercial break.

Theory sets up for a Pedigree but Rollins gets a reversal sequence that ends in the Stomp and the W.

A big black car drives up and a very Ucey Roman Reigns and Wise Man arrive.

After the break, Reigns makes his way to the ring. Texas acknowledges Reigns then chants “Ucey”, and again Reigns breaks character. The promo turns to focus on the upcoming match against Logan Paul when The Miz interrupts.

Miz warns Reigns about Logan’s right hand, and looks to get a quid pro quo to help with Miz’s problem with Dexter Lumis while Miz would aid in the battle against Paul. Reigns responds with a Superman Punch to Miz, knocking the A-Lister out cold.

One of the best promo segments of Reigns’ career.

Backstage, Kelley talks with Miz. Kelley reveals that Johnny Gargano will be sitting down with Byron Saxton later in the broadcast. Miz threatens a lawsuit if the segment airs. Mustafa Ali then pops up to smack talk Miz.

FWIW, it looks like HHH has made it clear who his friends are (NOAH) and aren’t (NJPW) in Japan. Battle lines drawn.

Anderson hammers Dom at ringside then walks into a Jungle Kick from Priest before the commercial break (that’s three for three).

Anderson Spinebuster looks crisp as all hell, but nothing good comes from him going to the top rope (ever).

Reckoning is countered into a backslide for the surprise duke.

Immediately, the factions pour into the ring, including Rhea Ripley hitting Luke Gallows in the crown jewels. Ripley challenges the remaining standing OC’ers, and quite frankly this is getting repetitive. Someone just align themselves with another female competitor already! The various OC’ers are laid out before Dom gets in the Guerrero tribute (again, I HATE THIS!). This is getting too tired from all angles.

JBL is out next and goes all-out Republican on the crowd before Baron Corbin joins the fray. R-Truth interrupts, looking like a total goofball. Segment ends with Corbin hitting the End of Days on Truth. Oy.

Riddle is dressed as Ezekiel, while Chad Gable and Otis re-enact a famous SNL skit involving Patrick Swayze and Chris Farley as Chippendale dancers. They actually do a really good job of the tribute.

And yes, this match goes to a commercial break too. Four for four.

Plunder is all over the place when we get back from break, and the fun continues. Elias and Gable get involved late, with Otis getting pumpkin headed until the sloppiest RKO/Cutter you’ve ever seen.

The Miz vs. Mustafa Ali

Match spills to the outside where Lumis assaults Miz. We return to the ring and Ali hits a BEAUTIFUL Superkick on Miz before hitting the 450 for the win.

Back from break, we get a 60 Minutes rip-off with Johnny Gargano and Byron Saxton. Gargano says the whole thing with Miz and Lumis has been staged.

Kai-n-Sky have incredible tandem offence going early. We get the hotly anticipated square-off between Asuka and Iyo, and the two do not disappoint at all…. until… yep, 6 for 6 tonight.

Action continues hotly while Belair and Bayley battle outside the ring, which ends with a Belly to Bayley through some staging.

The in-ring is amazing through all of it, and finishes with Twisted Bliss for the title change.

Not a bad night of action overall, but the complaint points are the same.