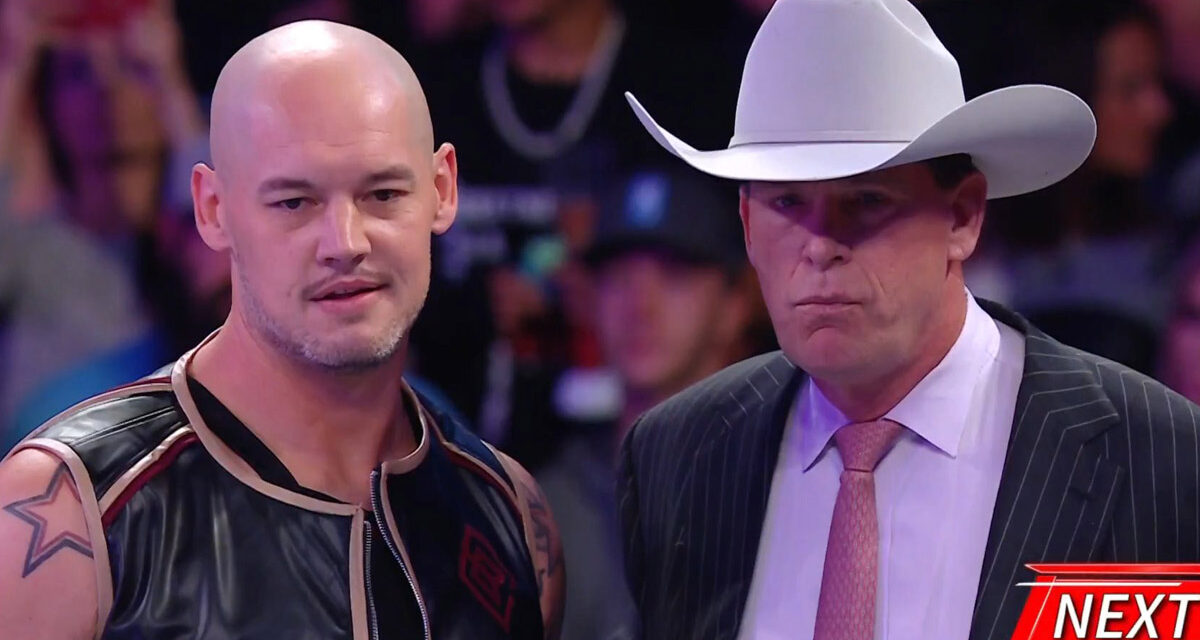 We get a cold opening to start with Bobby Lashley calling out Brock Lesnar and the two going at it hard quickly. The two break through the barrier into the timekeeper’s area before roster members, security and agents try to break everything up. You can imagine how well that works.

Lashley eventually dumps Lesnar through the announcer’s table to chants of “Bobby Sucks”, so for some unknown he reason he seems to be taking the role of heel in this battle.

It’s disappointing that Gable and Otis are essentially jobbers to the stars at this point, but their presence certainly doesn’t feel like they’ve piled up the losses.

The conclusion, of course, is fargone, but the match was decent enough, largely because of Gable.

Post-match, The Judgement Day comes out to mouth off. Balor says he made these guys and he’ll break them. Match challenge comes at Crown Jewel. Styles gets a shot in on Rhea Ripley which gets Dom riled up. Insert jokes here. AJ retorts by challenging Dom, a challenge that Papi Ripley accepts on his behalf. Match is set for later tonight.

Oh, and Sportsnet 360 – change your bumper ad for NXT already. Io Shirai has been on the main roster for nearly two months.

Back from break, we get Seth Rollins in the ring for a promo. He talks up his match later in the night against Matt Riddle until Mustafa Ali, who seemingly has new music, comes out. The war of words goes pretty darn well until Rollins unleashes a cheap attack. Ali retorts with an assault outside the ring until Rollins absolutely destroys him. Rollins looks great, Ali does not.

We then head to break with JBL’s limo pulling up.

It’s feeling like the Raw women’s roster is a lot thinner than it actually is; but injuries are certainly stacking up.

The match gets the commercial break treatment but it is hard to get into this match without any true logic as to why LeRae and Belair are teaming. LeRae looks great in the ring, but there needs to be more substance to these extra players in the story being told.

Late in the match, Bayley gets ready to hit the ring with Kendo Stick in tow, but Belair breaks that party up. The unfortunate part is this leave LeRae alone and vulnerable.

Backstage, Matt Riddle runs into a returning Cathy Kelley. Riddle then runs into Ali and pumps him up until they hear Miz screaming in pain, saying he won’t be able to compete against Dexter Lumis tonight after slipping on the floor. To his credit, there is a giant puddle on the floor…

Back from break, Dom is dressed and ready to go and chatting with the Judgement Day. We then see Cora Jade enter the picture to pick the poison for tomorrow’s NXT. Papi Ripley accepts.

Back to ringside, JBL is out and destroys any sense of Oklahoma pride. JBL then announces that Rey Mysterio’s move to SmackDown was actually a trade. Now on Raw is Baron Corbin… wearing… dear god what is he wearing? I’ll take Applebee’s greeter Corbin over this. Apparently Corbin is the new Wrestling God. Sure…

We get our second cross-commercial match of the night as the crowd chants “Bum-ass Corbin”. Ziggler continues his usual HBK cosplay. I miss Bobby Roode.

Honestly, this match is just crawling and going way, way too long. Other recappers probably have broken their stop-watches watching this match. End of Days finishes it for Bum-Ass. Please, for the love of god, get rid of fleshtone material when designing for Corbin.

Back in the doctor’s office, Miz pleads his case to Byron Saxton until his rouse is exposed. Bleh.

We then get an MVP promo on Baron Corbin on behalf of Omos.

Backstage, Cameron Grimes approaches The OC, and the Good Brothers accept his request.

This is just so beneath Styles, it’s not even funny. Dom needs to be on NXT for proper seasoning and it’s never been more apparent.

The match starts to pick up after… say it with me now… a commercial break, but then Dom goes to the cheap heat with the Eddie moves. How much more of this are we really going to put up with?

We get the inevitable square off between the OC and Judgement Day before, like always, Papi Ripley interferes and helps Dom to victory. I’ve seen bad, but this is… well… right up there with the worst of it.

Dexter Lumis vs. The Miz

Before the match can start, Miz attacks Lumis with a chair then finishes things with a Skull-Crushing Finale. VERY effective.

Backstage, Saxton chats with Damage Control. Bayley threatens Bianca Belair. The two will square off next week, apparently in a non-title match.

Elias is out for his return and has a keyboard. Huh. Suddenly, Riddle comes down with a pair of bongos. Riddle ruined this return in short order.

We start the match with 19 minutes or so left in the broadcast. You know what that means…

Kidding aside, had it not been for these two battling so often in the last few months, I’d hold this very strong match in higher regard.

Rolins is also very effective in incorporating Elias into the match, begging to be hit at one point by the crooner so a DQ would be ordered. Instead, we get the Randy Orton cosplay from Riddle. Elias comes into the ring late, collides with Riddle off a blocked attempt at the RKO, and results in Rollins Stomping his way to victory

Post match, Elias eats a Stomp, then Riddle looks like he’ll eat one on the belt until Mustafa Ali comes back out. Ali continues an intense assault as we get our next challenger to Rollins’ crown.

Outside of the start and finish, this episode of Raw was fairly harmless but not satisfying. We really need the big belts split again to help build more fury on Raw.