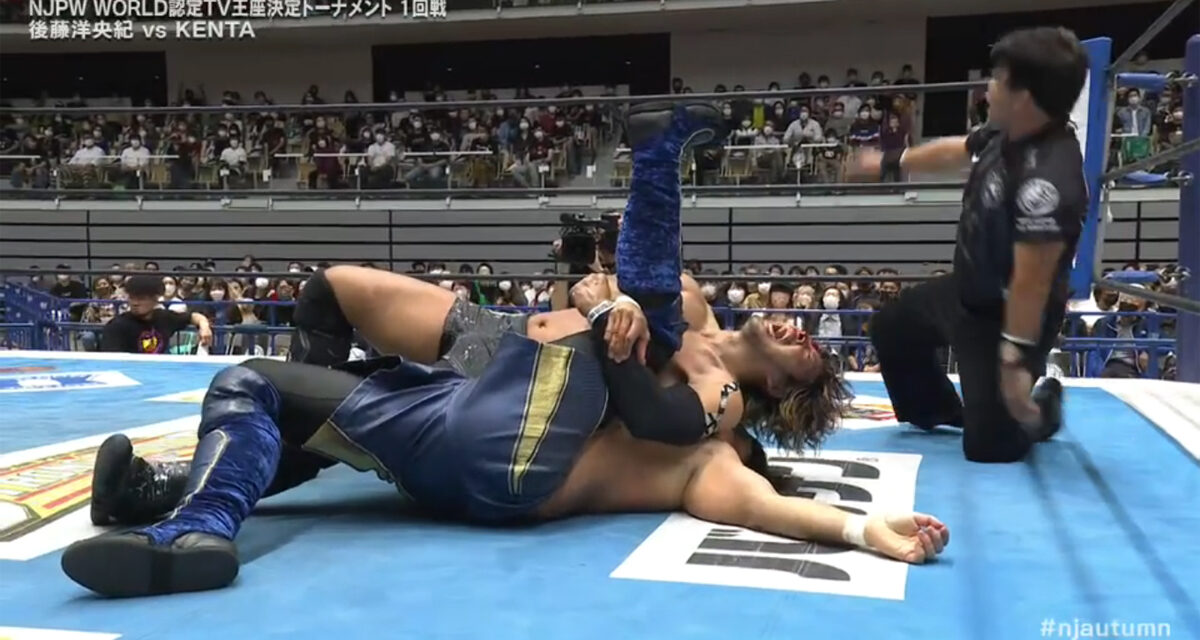 On the third night Kenta and Sanada both moved on to the second round.

In Kenta’s match against Hirooki Goto, Kenta brought a steel chair into the match but Goto shoulder blocked it into Kenta’s face.  Goto picked up the chair, thought about using it but then discarded it. Kenta punched Goto in the “lower abdomen” as the official threw the chair out of the ring. Kenta was bleeding from a cut to the forehead from his collision with the chair. Kenta picked up the chair as the official attempted to wrest it out of his hands. Kenta labeled Goto with about eight punches to the head, rammed him into an exposed turnbuckle and pinned him after a second Go To Sleep. Kenta messed up the first one.

Sanada managed to sneak past Taichi with a bridging roll-up to end his quest for the championship.

Thus far the second round matches are:

The first ever NJPW’s World Television Champion will be crowned at Wrestle Kingdom on January 4th.

Makabe makes the Young Lion submit to the Boston Crab.

Hashi forces Grey to tap out to his Butterfly Lock.

Evil pins Tenzan with Everything is Evil

Alex Zayn scores the pin for his team with a Cinnamon Twist on Taka from the top rope.

Ishimori brings in a steel chair but gets it drop kicked in his face. Shingo pins Gedo with a Pumping Bomber clothesline.

Same finish as the last two night but this time TJ Perkins gets pinned with an MX from Bushi and a double stomp from Titan.