NWA USA: Jax Dane and Anthony Mayweather add another layer to their feud 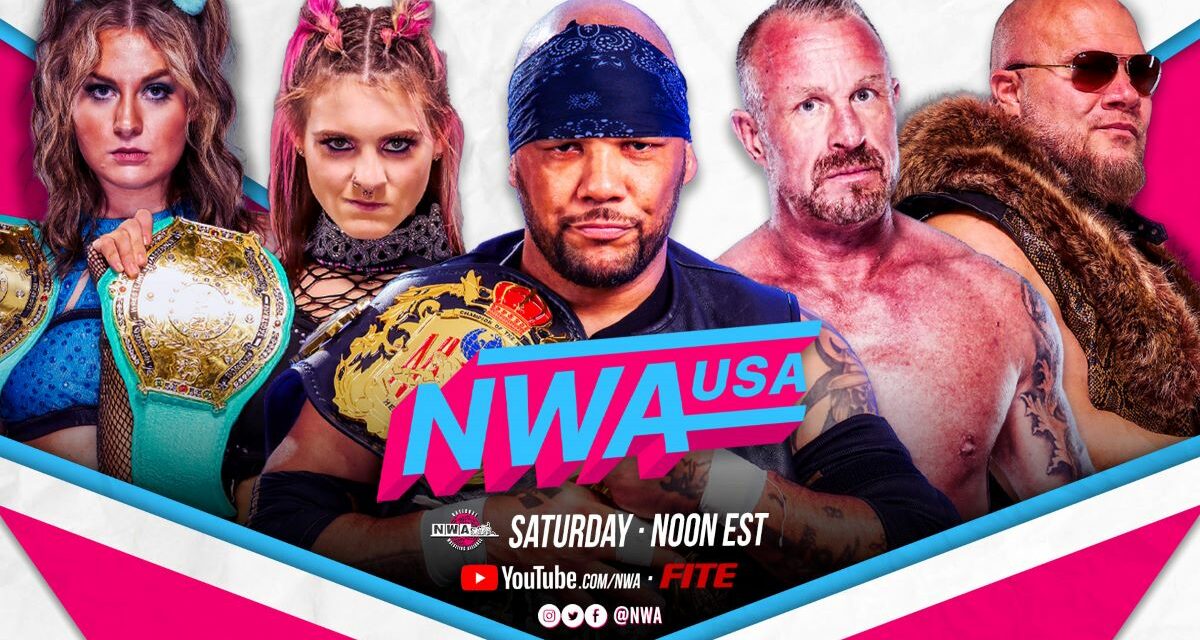 War Kings no more, Jax Dane and Anthony Mayweather hate each other passionately. That hatred has now escalated on this NWA USA in a Falls Count Anywhere match, and no one is safe from the destruction Mayweather and The Dane Event will unleash on this show.

Between that and a card that has the NWA Junior Heavyweight title on the line, let’s head to the Skyway Studios. Joe Galli, Tim Storm, and Velvet Sky have the call, and your First Match is started… 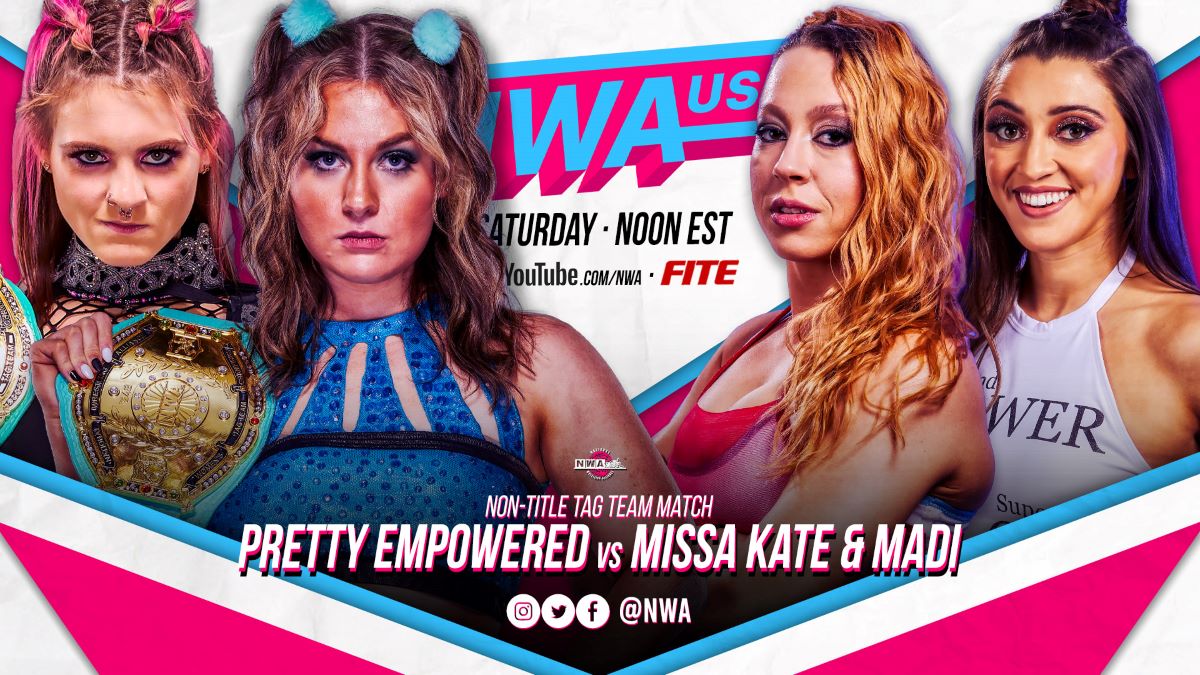 The NWA Women’s Tag Team champions Pearl Harbor the challengers, and isolate Kate in the ring at the start of the bout.  Kate gets Paige with a thrust kick, and then tags in Madi.  She whips Paige to the ropes and follows up with a running crossbody to a snapmare and a facebuster, but Envy breaks the count.  Pretty Empowered now get Madi in their corner, and Paige is absolutely vicious in her attacks.  It’s looking bleak but she manages to get the hot tag to her partner, and Kate manages to ram Envy’s head hard to the middle turnbuckle.  Soon, Paige is thrown out, Kate nails with a roundhouse kick to Envy and Madi finishes things off with a Reality Check to pin her clean.

Your Winners via Pinfall:  Missa Kate and Madi

Wow!  Not even the champs expected that and that gives Kate and Madi the momentum needed to challenge the Empowered ones for a shot at the tag straps down the road.

At The Podium with Kyle Davis is Thom Latimer, as they talk about the head games EC3 has been playing with The King of All Evil. Latimer says he only thinks he’s in his head but emphasizes that EC3 getting in his face of “dealing with his demons” will be his funeral.

May Valentine is backstage with Kratos, Asking why he’s trying to interfere with the love of her life, Aron Stevens. Kratos incredulously asks Valentine if the tickets to Brazil are ready, and Valentine says they’re “booked and set, but we are going.”  She also says Stevens is retired, and he’s not surprised by his antics. He reminds us that he and Stevens ran the tag division for a year, and he was picked by Stevens to be a fighter beside him.  He knows all about his tricks and acknowledges Stevens may have had titles in other companies but Kratos makes it clear he is a legit threat anywhere else. Now fight him!

But before I update my passport, it’s time for a title match for the… 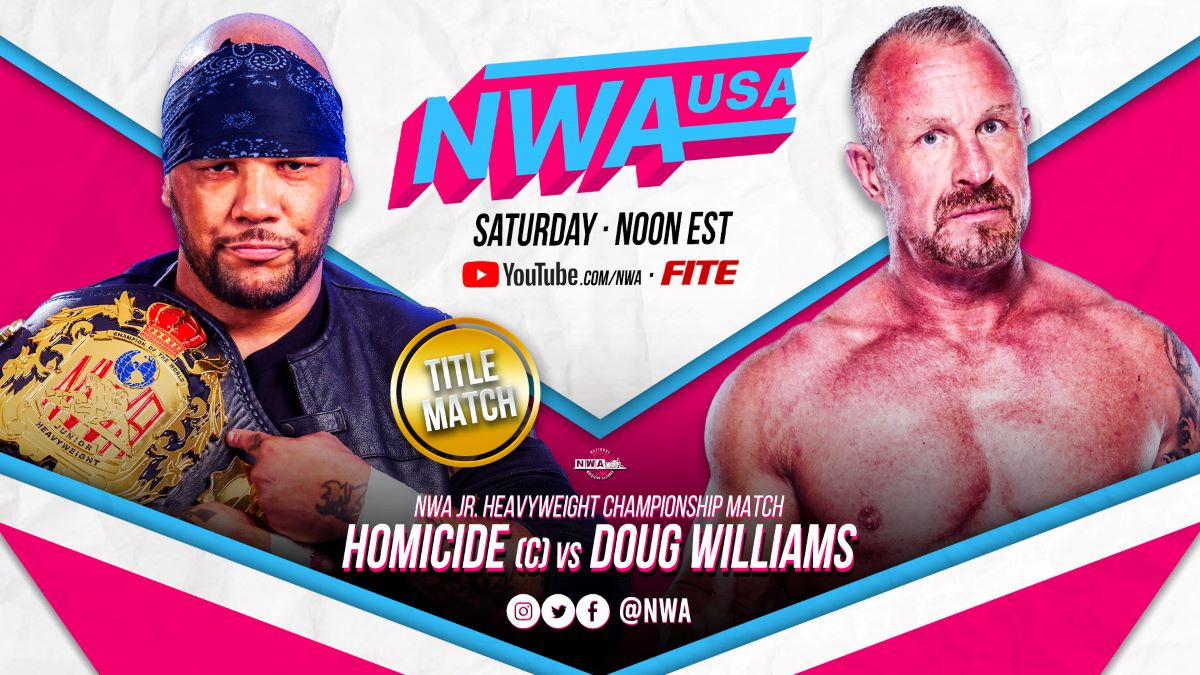 As the match starts, Homicide gets in his grill playing mind games, but The Ambassador gets into his groove with some chain wrestling.  He gets Homicide in a hammerlock, but he sends Williams to the outside of the ring.  Homicide grabs a chair but the ref gets in the way, so he abandons that plan. Storm and Sky argue about the kind of champion Homicide has become;  Storm argues he’s started to devolve into something less than championship material, whereas Sky has seen this before, and remarks that he is just returning to his roots.

Back in the ring and Williams gets back on offense with an overhead belly-to-belly suplex to Homicide for a near fall.  Homicide channels his inner Terry Funk and gets in an eye poke.  He also tries to hurt The Ambassador with joint manipulation as well as biting said joints.  Williams manages to fight out, but Homicide nails a flash Koji cutter for a two count. He sets up Williams on the top turnbuckle, but a headbutt to Homicide followed by a flying European uppercut gets him back in the driver’s seat to cover for a near fall. Williams hits a beautiful  Tiger Driver for another two count.  He attempts the Chaos Theory finisher, but Homicide catches him hard with a backfist and a blow to the back of the head, followed by a hard DDT to the mat. He screams at Williams to get up and then goes to a Boston crab, but Williams is completely out, and the ref calls the match.

Lots of boos from the crowd after the match, as Homicide wonders why they’re so mad.  People are fickle, I suppose.

Earlier, Kyle Davis had an interview with Austin Idol and Cyon on rumors that he is injured and won’t be at Hard Times 3. Idol says Davis looks dumb but cannot be *that* dumb, and not feed into the rumors. Cyon himself attested that he will be at the PPV.  Interesting.

There is an NWA POWERRR recap of the main event between Taya Valkyrie and KiLynn King on who would be the number one contender to face Kamille, but you should read here on this and all the other matches that took place.

But let’s get back to the ring for the… 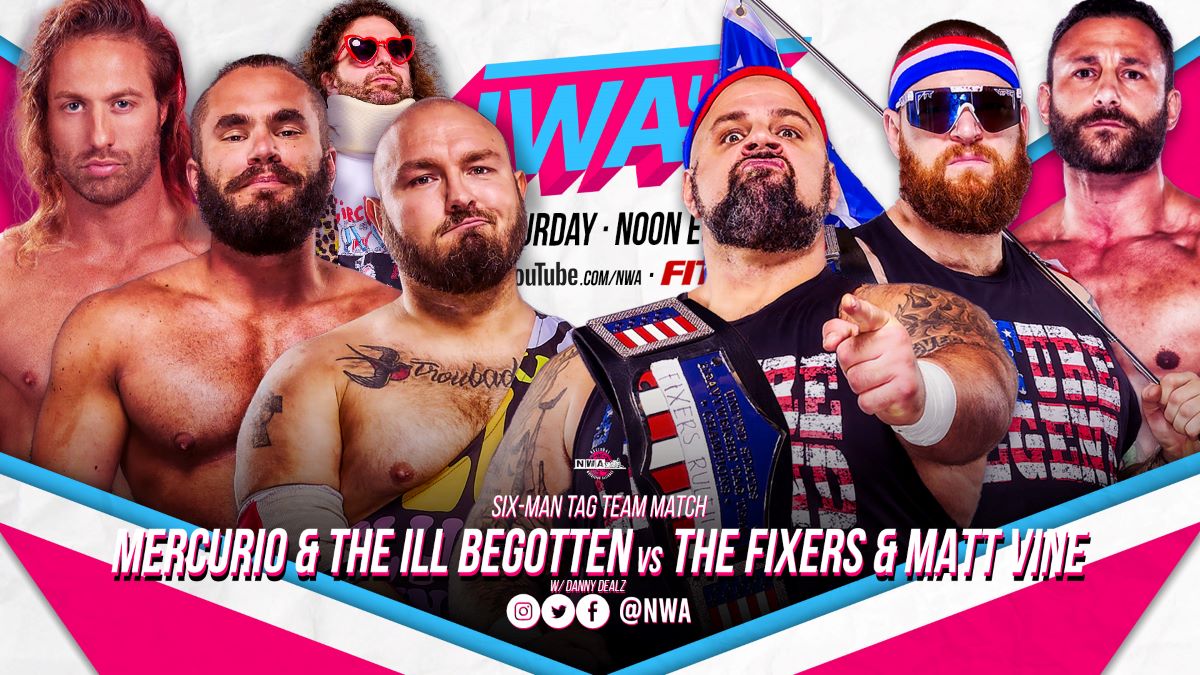 As the match starts, Vine comes out late with his arm in a sling(?).  As we wonder what will happen since this has quickly become a handicap match, Storm comes in with breaking news that was injured “waving the flag.”  So, wait a tick.  He has…Flag-Waving Elbow?

The Fixers are still making do, as they work over Mercurio and then Plunkett.  Taylor tried to turn the tide, but to no avail.  Dealz distracts Bradley by grabbing his leg, and Mercurio uses the opportunity to hit him with his book on the back of his head.  Stunned, that makes him easy pickings for The Ill-Begotten and Mercurio, as “The Boss” is a Fixer in Peril.  As Taylor and Plunkett set up Bradley on the top turnbuckle for a double-team suplex, he shoves them off and then lands a flying shoulder tackle.  One hot tag to Legursky, and he is a Wrecking Ball En Fuego.  The matches starts to devolve as The Fixers get Mercurio an armpit bomb a la The Nasty Boys, making him give-a the ugly face, and a double powerbomb to Plunkett is enough to get the pin and the win.

Your Winners via Pinfall:  The Fixers (without Matt Vine)

May Valentine is with The Question Mack…err, Mark.  This is the short(er) version of the interview segment:  Wants Kratos. Karate.

Kyle Davis is in the NWA Control Center and tells us of the upcoming matches on this NWA POWERRR.  Among the highlights, Joe Ocasio will face Kerry Morton for a spot at the NWA Junior Heavyweight title match at Hard Times 3, and Matt Taven will face off against Trevor Murdoch.

Speaking of which, Valentine is with Matt Taven about his chances facing against the NWA Heavyweight champion.  Taven acknowledges he’s facing The Man in the NWA, but he’s never stepped down from a right, and that is a Trend he continues on, as he faces more men like that, and hopes to claim more belts in the NWA.

(Author’s Note to Smart Marks:  Yeah, I know he and Mike Bennett and Maria Kanellis-Bennett made their debut on AEW the other day, but let’s suspend disbelief and enjoy it for what it is, m’Kay?)

As we go to the Main Event, Jax Dane and Chris Silvio, Esquire are in the ring, and then Kyle Davis starts to introduce into the ring…

Anthony Mayweather, who is with his son Mason, and he’s wearing a suit and blazer.  He goes to Davis at The Podium and…well, let me have him explain…

What does matter? Is my daughter Lydia watching at home right now? And what does matter is my son, Mason, right here, and it’s never been as clear as it is to me now that Jax Danehe no longer matters. Listen to me when I say this, Jax. This thing between us?  It’s done. It’s over. I can’t waste any more time or energy on you or him.”

Silvio gets out of the ring and gets in Mayweather’s grill and tries to bait him, but Mayweather says that dog won’t hunt, and he has nothing to prove to him or his stooge.

Now Dane comes out and tries to goad him, calling him a part-time wrestler, a part-time partner, and a part-time father. Then Dane goes on and talks directly to Mason, and says he needs a hero.  Since his father keeps quitting, ol’ uncle Jax offers up the chance to “be his daddy.”

Well, that did it, and the blazer is off, and they come to blows.  It’s not so much a Falls Count Anywhere Match, but a straight-up street fight.  Dane low-blows Mayweather and goes for the kill as referees come out to break up the melee.  Dane tosses ref Jacob Fritz away, and then walks off satisfied that he caused more damage to Mayweather.

Mason checks on his dad.  He’s still hurt, but Mayweather is able to acknowledge his son as the show goes to the credits.

A solid show and the highlight is the Homicide/Williams matchup, as The Notorious Legend succumbs to The Boricua Side of the Force.  Mayweather/Dane is another highlight, too.  While I would have preferred a match, this adds another layer to their feud, and I almost don’t want to see a conclusion.  Almost.