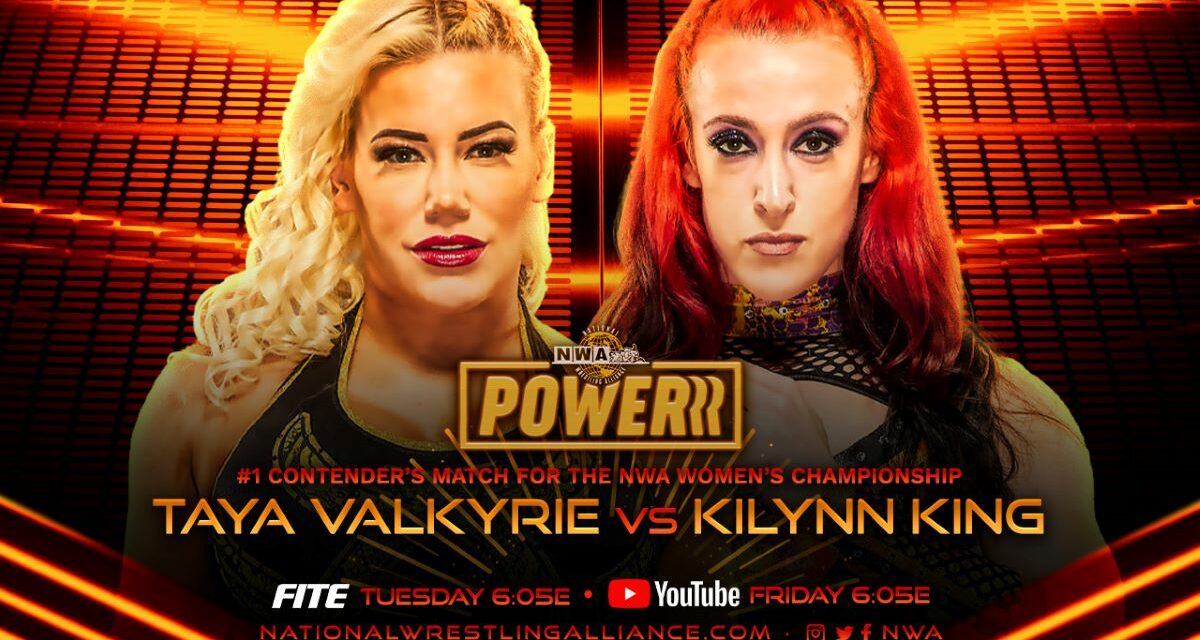 Two big matches on this episode of NWA POWERRR highlight what is to come next month.  Not only will we have the three-way match to determine who will challenge The Great Cyon for the NWA National Championship, but Taya Valkyrie and KiLynn King will settle once and for all who will be the number one contender to face Kamille for The Burke at the Hard Times 3 pay-per-view.

Let’s head to the Skyway Studios in Nashville, TN. Joe Galli, Tim Storm, and Velvet Sky have the call, and the First Match is… 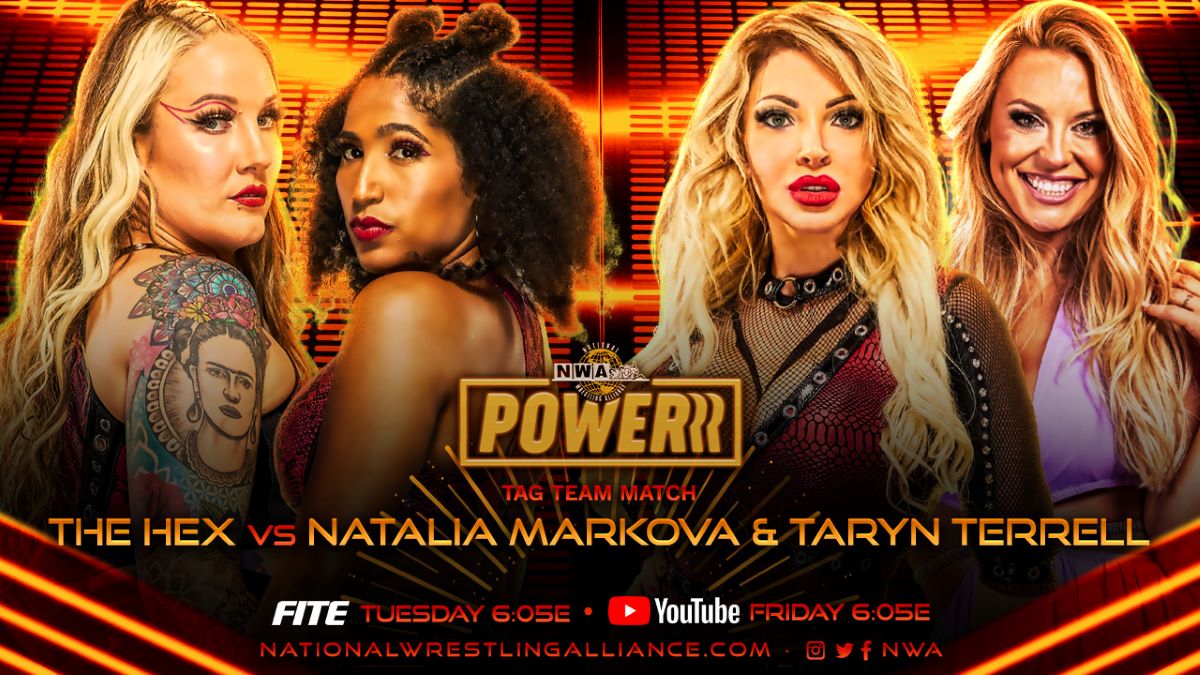 There’s some nice chain wrestling between Markova and Belle, but it isn’t long before she gets the upper hand.  There’s some great double-team chemistry by The Hex to keep Markova grounded.  As Belle and Kay work in a snap mare to a seated neckbreaker to a kick to Markova, Terrell distracts Belle with her poofy skirt, and Markova uses the opportunity to attack Belle from the back.  Tag to Terrell, and she is vicious in her offense to Belle, and Markova tags back in to add the exclamation point with a mafia kick.  Belle fights back with a running knee strike, but Markova hits the Jazz Stinger.  Terrell blind tags in to cover for just a two count, and Markova doesn’t care for that.  Pretty soon, it gets heated with both women wanting the glory.  meanwhile, Belle tags in Kay and she is an AK en Fuego.  A Pier Four gets underway with all four women, but Kay and Belle manage to toss Markova out of the ring to deliver Hex Marks the Spot to Terrell for the three counts.

Your Winner via Pinfall:  The Hex

At The Podium with Kyle Davis is Homicide and slipping back to old ways. There’s a rumor he’s changing, but he says it’s the same Homicide he’s always been for 28 years. He’s a fighting champ, and there’s been “too many chihuahuas” trying to get in his face but no one’s gonna beat him. This is Old School Homicide, he says,  and anyone who doesn’t like it can “kiss his Puerto Rican @$$.”

“He’s carrying himself like a champ,” says Davis, which is putting it mildly.

May Valentine is backstage with The Question Mark II.  He says, in broken English (or Mongrovian, depending on your translation) that he’s here to honor his brother’s memory and the country of Mongrovia. Valentine asks if he has a visa because there’s talk he could be deported. He again states he’s here to fight for honor, not for visa.

Must be a dialect thing.  Where’s Google Translate when ya need it?

Davis in the Control Center on what to expect with announced matches for Hard Times 3.  Other than what’s been discussed already, he mentioned The Fixers will put their NWA USA tag titles on the line against The Spectaculars. Also, Homicide will be facing Doug Williams on this NWA USA with the NWA Junior Heavyweight title up for grabs. Whoever wins it will face Kerry Morton in the upcoming PPV.

But let’s get to ringside for… 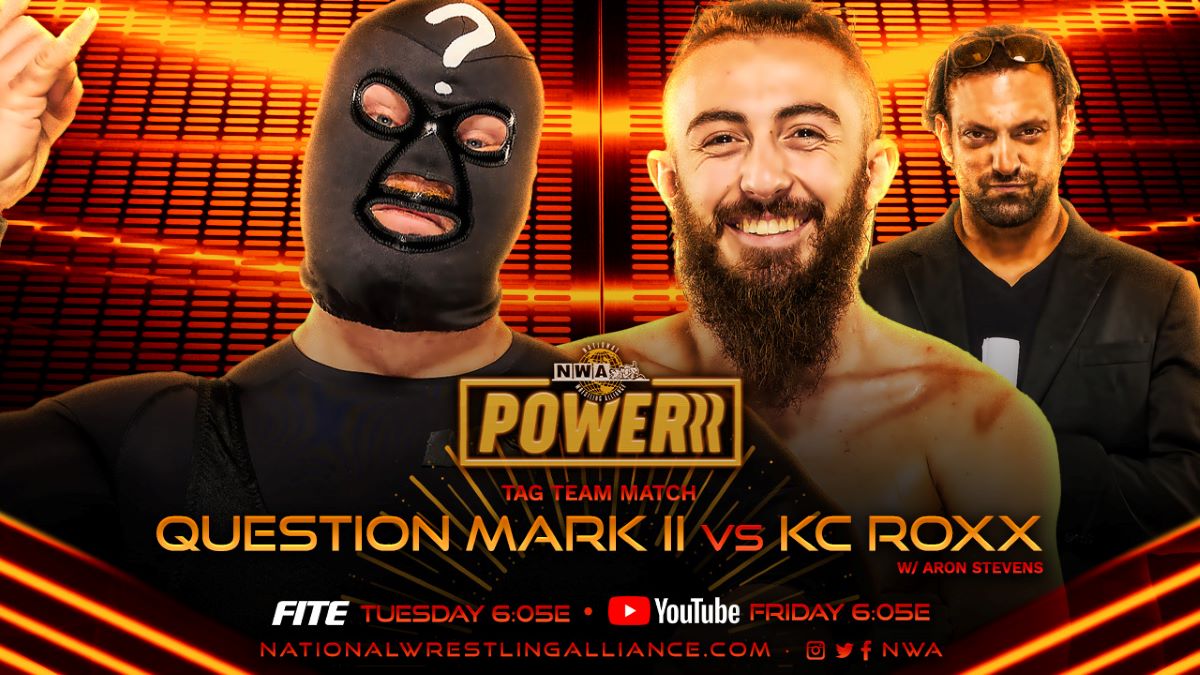 During the match, Stevens eats some really sad-looking pizza with his glove on.  He then gets on the mic midway through the match to call The Question Mark a fraud. This is why wrestling stinks, he says, and he hates all of us.

As for the match, enjoy this Mongrovian Haiku in Review™:

Roxx, to his dismay

Your Winner via Pinfall:  The Question Mark II

Now May Valentine is with Matt Cardona and Chelsea Green, and she tries to get the inside story on their secret as the power couple of the NWA.  Cardona tells her in so many words that won’t happen.  Valentine asks if the three-way at Hard Times 3 will be a factor in who he’d rather face off between Trevor Murdoch or  Tyrus and what will be the X-factor.  Cardona says it doesn’t matter, since he will walk out of there as a two-time NWA Heavyweight champion.  Valentine then asks Green if she is still focused on pursuing The Burke held by Kamille, and she and Cardonba think her questions are so dumb that they decide to bounce.

Dr. Tom Prichard Joins Galli and Sky at commentary as we head ringside for the… 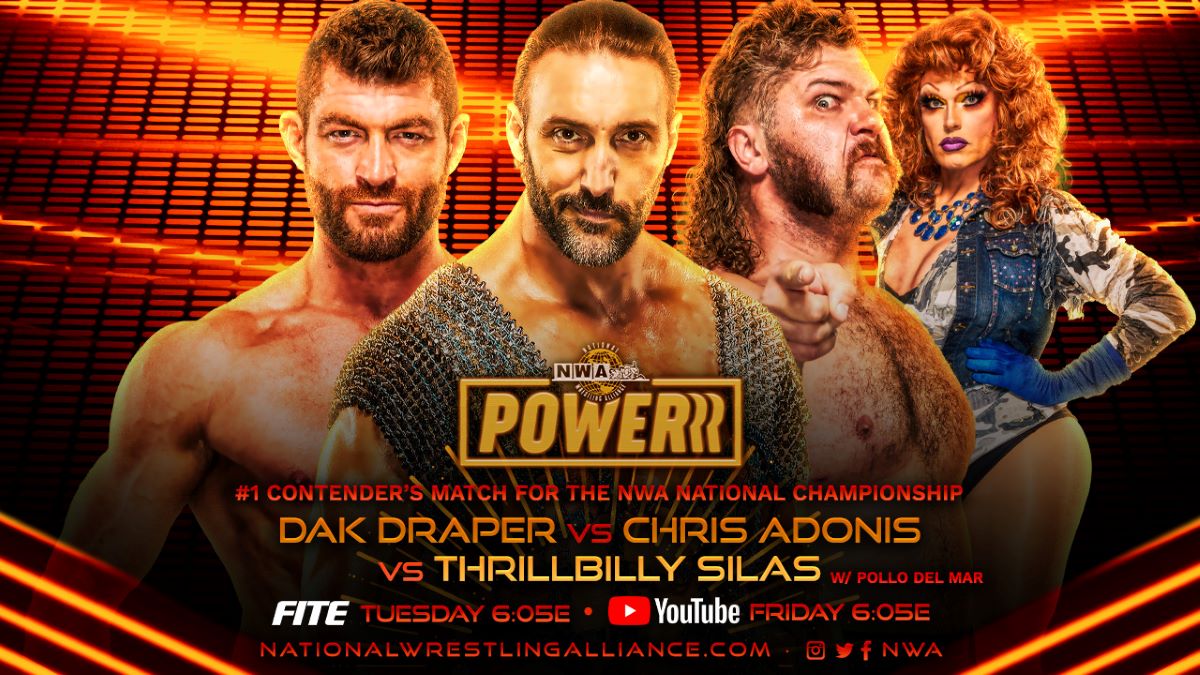 As all three men eye each other in the ring, Mason attacks Draper, and then Adonis tries to put the match away by slipping The Masterlock quickly on Mason before Draper breaks up the submission.  He and Adonis double hip toss Mason, but Adonis rolls up Draper for a two count, and then Draper and Adonis tee off against one another.  Mason gets back in the fray and shoves Draper into Adonis to knock him out of the ring, and then stun guns Draper on the top rope.  Mason is in the driver’s seat against Draper chopping away at his chest, and then Draper returns the receipt.  Mason fires back with another chop to cover Draper for a near fall.  He adds a headbutt to Draper, and Adonis is back in the ring to clean house, and nails a spinebuster to the “Thrillbilly.”  Draper gets his own offense in with springboard back elbows to Adonis, but Mason roars back with a massive clothesline.  Mason attempts The Thrillride finisher to Adonis, but the Masterpiece manages to get it reversed mid-swing to The Masterlock submission.  Before he can do any more damage, Draper lands with a boot to Adonis’ side and then delivers the Magnum-KO on Mason for the three count, which means…

Your Winner, and Number One Contender for the NWA National Title:  Dak Draper

There is a recap of the tag match between The Miserably Faithful and The Specatulars on the NWA USA SURGE with The Fixers but read here for everything you missed (since you apparently hate America).

But let’s go to the ring for The Main Event, which is a…

As the bell rings, both women circle each other, and then Valkyrie unleashes a kick to King’s thigh.  As she walks it off King reciprocates in a bit of tit-for-tat.  Now things turn up a notch, as King gets Valkyrie on the ring apron and nails an STO hard on the ring edge, and then sends her back in with a suplex to cover for a near fall.  King continues with shoulder tackles in the corner and then picks up Valkyrie in a fireman’s carry to ram her head into the top turnbuckle. King rushes into the corner and Valkyrie evades and uses her momentum to send her crashing shoulder-first into the ring post.

Now La Wera Loca is in control, as she slams King’s head to the mat and then covers for a one count.  In the corner, Valkyrie stomps away with fuzzy boots in the corner to King and then kicks the inside of the thigh for good measure.  Valkyrie continues to work the inside of the leg to soften her up further and then covers for a two count.  She then rolls through and gets her leg wrapped around King’s neck, while wrenching her arm. King rolls to pin, and Valkyrie breaks the hold.  Now King goes for her own submission with a side Figure Four leglock. Valkyrie reaches and grabs the bottom rope to break the hold.  Now Valkyrie goes for an ankle lock, and transitions to an STF, trying to get her signature Loca Lock in. King manages again to roll her up to a pin for just a two count.

Valkyrie goes to a surfboard and then nails a curb stomp to cover for another two count.  Up top goes Valkyrie, but King cuts her off at the pass with a running high knee in the corner.  She kicks off King to crash onto the mat and Valkyrie nails with a crossbody for another near fall.  Now Valkyrie cinches in the Loca Lock and King is writhing in pain.  As she struggles to inch her way, she finally gets her hand to the bottom ropes to break the hold.  King is hurting, and Valkyrie adds a chop for good measure. all of a sudden, King delivers the Excalibuster outta nowhere and covers Valkyrie for the one, two, and three.

Your Winner, and New Number One Contender for the NWA’s Women’s Title:  Kilynn King

Valkyrie and King hug it out in a show of sportswomanship, and now she has another chance at The Burke.  All this will be fun to explore as the show goes to the credits.

The high rating is due to the final two matches.  First, congrats to the Mile High Magnum on his win.  The other contenders are also to be applauded, and there is definitely more to be seen in the weeks ahead for guys like The “Thrillbilly.”  Also, King and Valkrie stole the show with an awesome Main Event.  I hope this isn’t the last we see Valkyrie in the NWA, but I do like the idea of Kamille/King 2 at the Hard Times 3 PPV.