NWA USA has an All American Surge with The Fixers 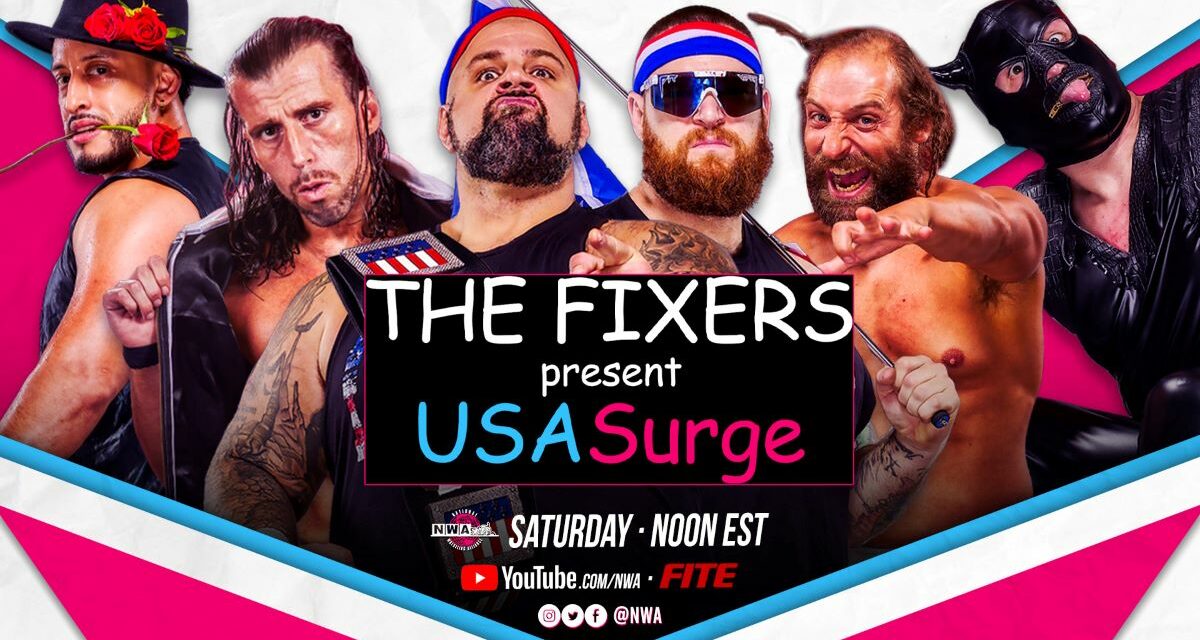 Time to get All-American on a special episode of NWA USA, and The Fixers are your special guest host.  Jay Bradley and “Wrecking Ball” Legursky” as your NWA USA Tag team champs, are here to lead the charge. They pledge allegiance because America rules and Fixers Rule. Bradley is in his Sunday best (a tuxedo shirt, natch!), and it’s time to jump into the action starting with… 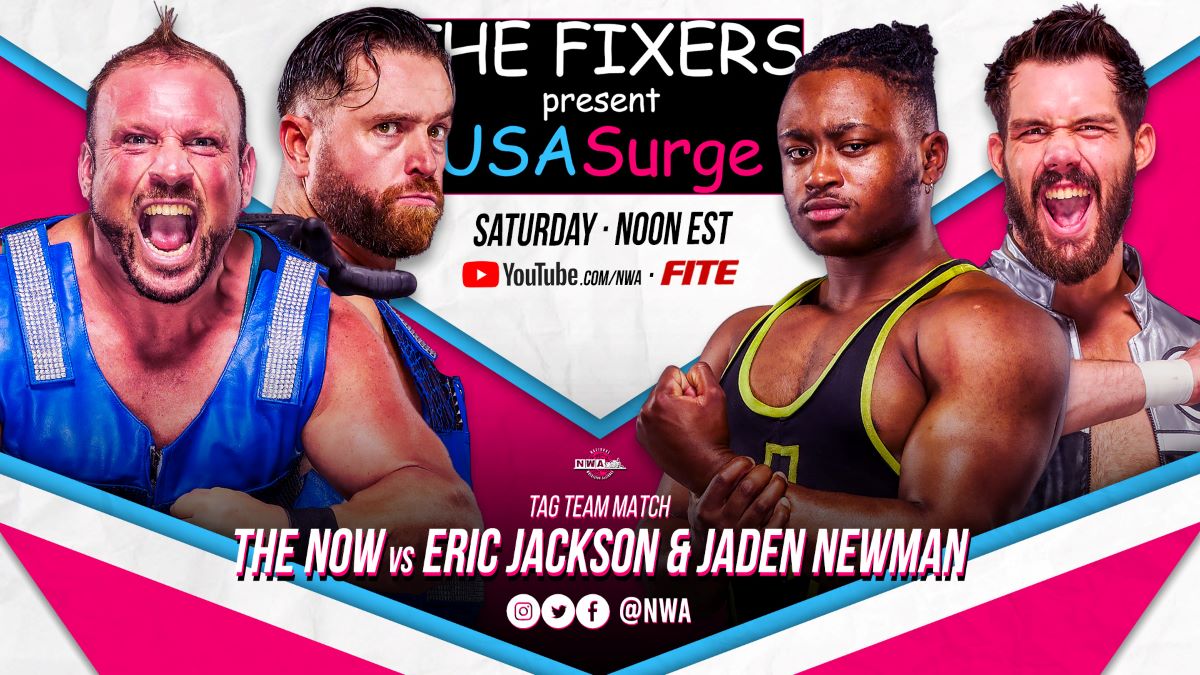 First-timer Newman, Joe Galli notes, is billed as “El Número Uno.”  He and Jackson have nice tag chemistry versus Collins, but that soon stops as he tags in Dalishus, who brings the offense to Jackson. Jackson tried to roll away, and Dalishus stops in mid-roll, as he drags him to The Now’s corner and they keep him isolated.  Dalishus whips Jackson hard to the corners and covers for a near fall.  Dalishus attempts an axe handle but Jackson dodges and gets the hot tag to Newman.  He takes it to The Now and finishes with a slam to Dalishus.  He covers but Collins breaks the count.  Jackson and Newman attempt another double team, but Collins grabs Jackson’s leg from the outside and pulls him out of the ring.  Newman is isolated and The Now delivers their finisher (a Demolition-style elbow drop Decapitation) and that seals the deal.

Your Winner via Pinfall:  The Now

The Fixers first guest is Mercurio (or if you prefer “Mercado”), their favorite Australian (heh). Bradley asks Super Mercado about catching alligators Down Under, whereas Legursky wants to know if the toilet bowls swirl the other way.  Mercurio is flabbergasted by this, and then Bradley wants him to make” the ugly face.”  Mercurio says there’s right two right here, pointing at The Fixers. Bradley retorts he is pretty, and Legursky is a Big, Beautiful Wrecking Ball!

Body Positivity has never had champions quite like The Fixers.

There’s a recap of EC3’s match challenge to Thom Latimer but read here if you missed the recap.

Kyle Davis is at NWA Control Center and says because there was a question about Taya Valkyrie getting a spot to face Kamille at the Hard Times PPV, she and KiLynn King will face each other on NWA POWERRR to settle who is the true number one contender. Also, Davis notes that there will be a three-way between Dak Draper, Chris Adonis, and “Thrillbilly” Silas Mason to determine who will face Cyon for the NWA National title at the PPV.

Now The Fixers are with “Magic” Jake Dumas (or “Captain Magic” or “Magic Jack”) as well as CJ smiling away. Bradley asks the hard-hitting question:  Where’s the science in magic on the periodic table?  Dumas doesn’t know what to do with this, but CJ does a magic trick for The Fixers as she makes one of her fingers disappear.  That blows their minds, and Bradley is convinced she’s a witch!

Before they get the bright idea to hold Salem-style witch trials, let’s go to the next match, which is… 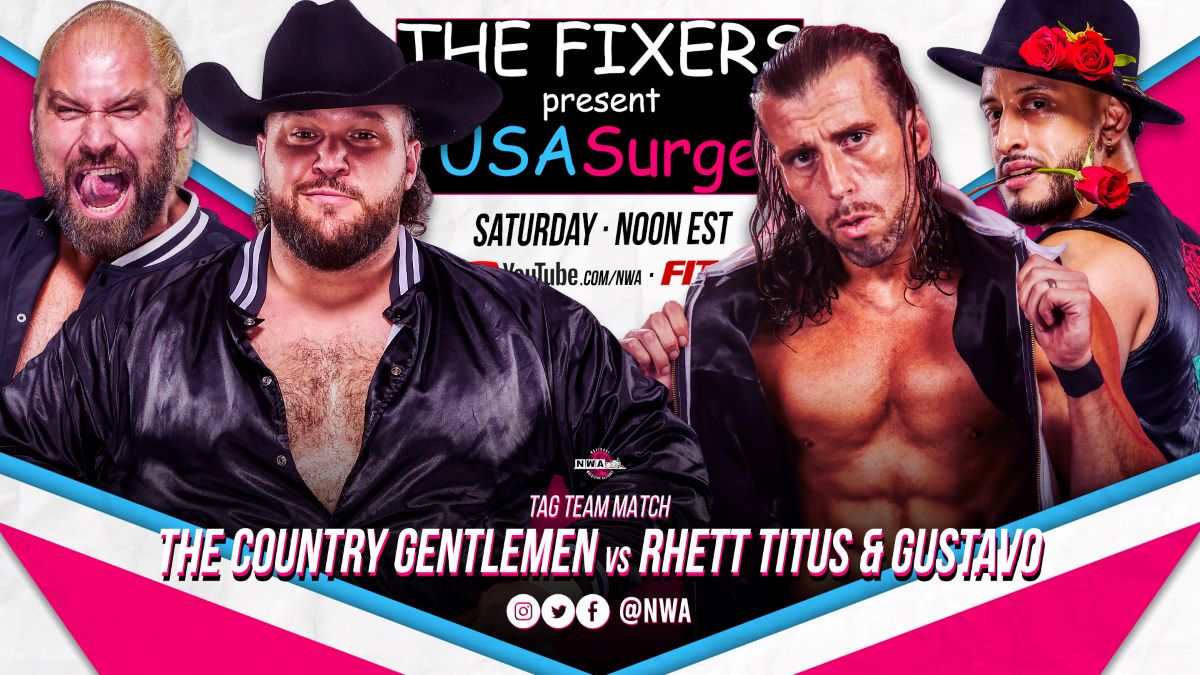 Titus is trying to make the hip-swiveling Gustavo more professional. As for me, he might have better luck getting him Addicted to Love.

Anyway, Cazana keeps Titus grounded at the start, but a tag to Gustavo has him coming down on The Legacy’s arm.  Both Titus and Gustavo make quick tags to utilize their speed, but Cazana pushes Titus to the corner, and his cousin Andrews is in the match.  Titus manages to get on offense of the “Adorable One” as he hammers at the hamstring of The Country Gentleman.  Tag to Gustavo, as they both give a little swivel of their hips and then make a wish pulling apart Andrews’ legs. Titus works over Andrews some more and attempts a tag, but Gustavo loves the fans and sways his hips, completely oblivious to his partner’s needs.  Andrews uses that distraction to get him in the corner and now The Country Gentlemen to get back to work, making Titus a Professional in Peril.  Andrews gets The Country Breakfast slam to Titus for a near fall, and then goes to a bear hug to push him back to the corner.  It’s looking bad, but then Titus manages to escape his opponents to finally tag in Gustavo and he is a Latin Lover en Fuego. He tries to utilize his speed, but Cazana is too powerful. He sets up Gustavo in a delayed vertical position, anf then tags to Andrews for a slam, and that’s The Ball Game (literally).

The Fixers are with their old boss, Colby Corino, and they talk about his dad. Bradley asks when Corino got in trouble with his dad if he punished him with the Bronco Buster.  Corino is confused, until Legursky and Bradley clarify if his dad is X-Pac. Corino is flummoxed, and says his dad is Steve Corino. “Wait,” says Bradley.  “You’re dad is Mr. Wrestling III?”

HA!  Gotta love those inside one-liners 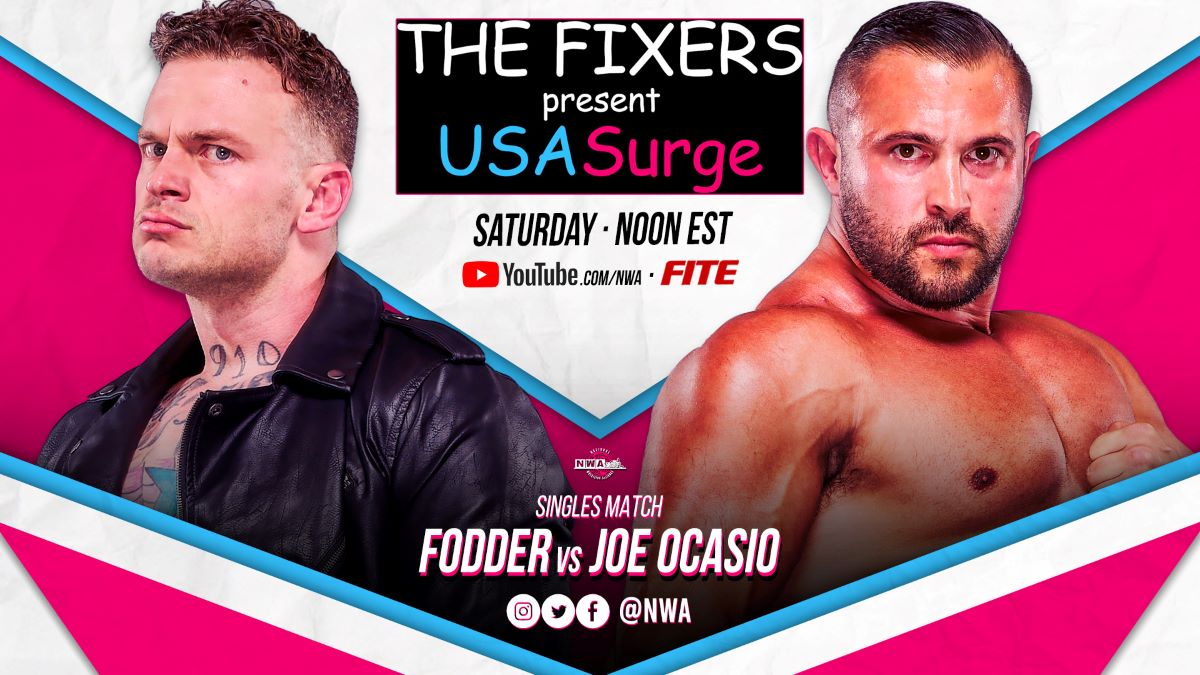 Fodder is one of the lieutenants in EC3’s Control Your Narrative stable, and wrestling for the first time in the NWA.  Ocasio tries to hold his own, but Fodder is vicious in his attacks on the new NWA star.  Ocasio comes back with a nasty-looking atomic drop that gets all of his tailbone on his knee.  Even Velvet Sky quips, “That’ll flare up your sciatica!” Ocasio is in the driver’s seat and whips Fodder to the corner.  He rushes at him, but Fodder evades, with Ocasio hitting the ring post with his momentum.  Now Fodder gets a snapmare and follows with a  boot to his shoulder and he keeps him grounded with a headlock.  Ocasio fights up to a vertical base, but Fodder nails a back elbow and follows with a leg drop to cover him for a near fall.  Ocasio finally comes back and hits Fodder in a lungblower.  Ocasio says “Strange is life!” to the fans, and delivers a suplex set up, and transitions midway to a cutter on Fodder for the three count.

Your Winner via Pinfall:  Joe Ocasio

The Fixers now have as their guests “Thrillbilly” Silas Mason and Pollo Del Mar. Bradley says that he and Mason are cut from the same cloth and that he is a true American hero.  He asks Mason what it’s like to follow in the footsteps of The Fixers, and Mason declares, “It’s like dinosaurs walking the earth!”  Legursky tries to ask Del Mar a question, but she is miffed that he didn’t introduce her at the beginning.  “Bad Legursky!”, says Bradley. “That’s no way to treat a lady.”  But Del Mar gathers her composure and says it’s an honor proclaims her man will be the next NWA National champion.

So let’s head to the ring for the Main Event… 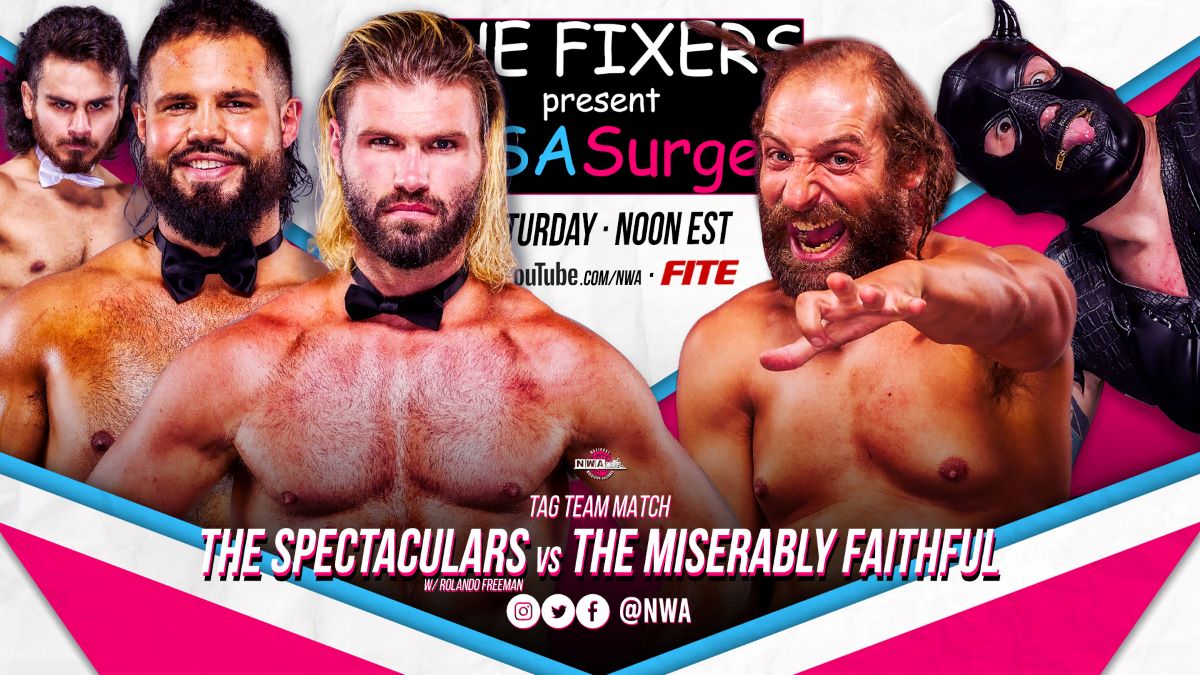 The Miserably Faithful (Sal the Pal & Gaagz the Gymp) vs. The Spectaculars, Brady Pierce & Rush Freeman (with Rolando Freeman)

Sal and Pierce start the match, and it isn’t long before Sal brings in the mind games.  Before he can really get going, Pierce sends him to his corner, and now The Spectaculars get to work, Sal manages to tag in Gaagz and GympaMania™ is running wild.  Freeman is hurting Gymp but he loves the pain because, well…Gymping Ain’t Easy!

Tag back to Sal who stomps at Freeman, followed by a field goal punt.  Sal and Gymp utilize quick tags as Freeman is Spectacularly in Peril.  Gymp chokes Freeman on the middle ropes, and a tag to Sal allows him to follow up with the Tiger Feint kick (which you know as a “619”).  Sal and Gymp attempt an assisted Splash on Freeman.  Gymp dives and misses and Freeman rolls to his corner for the hot tag to Pierce, who’s Spectacularly en Fuego.  He cleans house and tags Freeman back in to face off against Sal.  A backfist by Sal stops that momentum briefly, but he tags Pierce back in and The Spectaculars deliver a Demolition-style finisher to Sal to decapitate him if you will, and Freeman covers for the one, two, and three.

Your Winner via Pinfall:  The Spectaculars

Well, that’s all from The Fixers, so until then…

Mostly a solid show, but Bradley and Legursky are the real stars here, hence the .25 star.  So once again, Fixers Rule this NWA USA, and we’ll see you next Saturday!