AEW’s Dynamite debut in the north: A night of scissoring, patriotism, and overall good fun 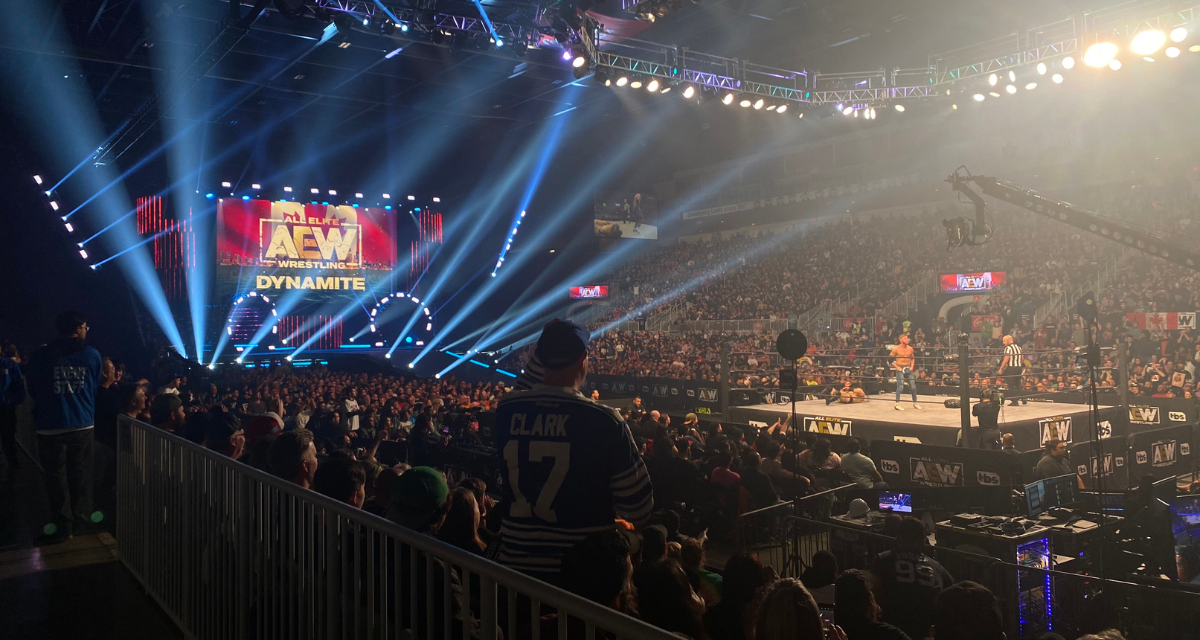 TORONTO — Since its debut in 2019, All Elite Wrestling has only run live events across the United States. However, earlier this summer, AEW announced its first wave of international events as Dynamite and Rampage shows became set for October at the Coca-Cola Coliseum in Toronto, Ontario, Canada. As I’ve grown to appreciate and become fond of the AEW product and talent, my desire to attend one of their events had only been brewing in these last few years. Thankfully, I was one of the many lucky first attendees and Canadian wrestling fans to experience All Elite Wrestling live and in person! The October 12, 2022, edition of AEW Dynamite was full of hard-hitting, entertaining action, made only more special with the help of a raucous and passionate Toronto crowd.

To begin the show, the Toronto crowd was greeted by one of their own… the debuting Canadian wrestling TV personality herself, Renee Paquette (fka Renee Young in WWE). A loud ovation ensued following her appearance, and the ovations continued as she called upon another Canadian wrestling star to appear on stage… enter Christian Cage! The Toronto crowd was spoiled early on by the sight of their two fellow Canadians, but the ever so cunning and villainous Christian Cage was able to swing the crowd back into boos as he insulted the much-loved, yet highly disappointing Toronto Maple Leafs. Cage served as a great segue into the opening contest of Luchasaurus and Jungle Boy. This opening match was a perfect way to get an already hot Toronto crowd extra hyped up and energized for the rest of Dynamite’s scheduled bouts and segments. A cool table spot and a very funny, “Edge is better” chant, had me quite into the Luchasaurus-Jungle Boy affair from bell to bell.

As the night drew on, two sets of fan-favourite tag teams took centre stage in their Dynamite showcases. Despite not being advertised to wrestle, “Top Guys” FTR (Dax Harwood and Cash Wheeler) came out to a very loud reaction from the Toronto crowd, as they came to the aid of AEW TNT Champion, Wardlow, and ROH World Television Champion, Samoa Joe. They managed to help get another Canadian a pretty sound reaction by bringing out Pinnacle stablemate, Shawn Spears. Later on, prior to the scheduled contest of their “Daddy Ass” Billy Gunn taking on Swerve Strickland, the Acclaimed (Platinum Max Caster and Anthony Bowens) got the crowd pretty lit with Max hitting the crowd with his signature freestyle rap… name dropping Canadian Prime Minister Justin Trudeau, and Leafs star Auston Matthews. Extreme cases of scissoring did in fact occur across the Coca-Cola Coliseum. That was until the ultimate party pooper, Smart Mark Sterling made his way out to the entrance ramp to voice his legal ramifications against the Acclaimed and their use of the scissoring taunt. 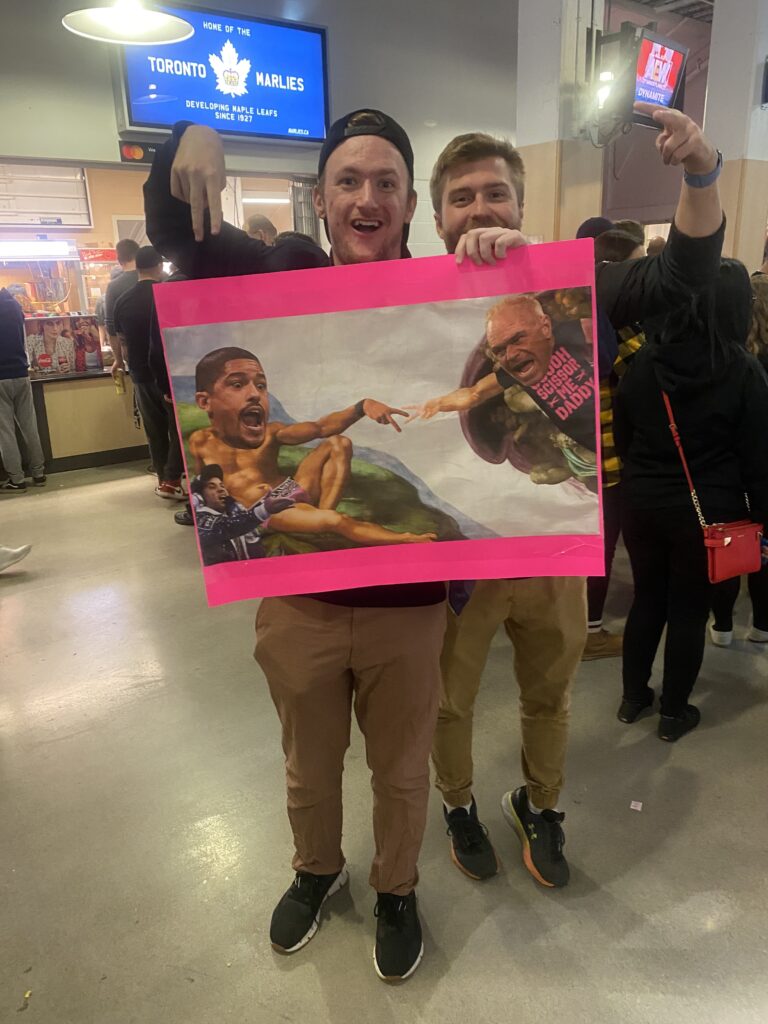 Acclaimed fans, Max and Anthony, display their lovely sign depicting Anthony Bowens and “Daddy Ass” Billy Gunn in the image of the famous painting, “The Creation of Adam” by Michelangelo.

Two televised segments followed featuring popular main eventers, MJF, and the AEW World Champion, Jon Moxley. These two men are very over with this Toronto crowd, and the visible signs all throughout Coca-Cola Coliseum speak heavily of their resonance… it’s all Acclaimed, Chris Jericho (who I’ll get to later), MJF, and Jon Moxley. MJF is only featured in a backstage interview segment, but he still manages to receive a more than worthy reaction despite popping up on the monitor and not in person in the ring. Mox makes his usual walk amongst the crowd, wherein I noticed a huge exodus of fans jump out of their seats prior to his segment with Hangman Adam Page, and take a position in the crowd entrance where Moxley would be coming out. Hangman Adam Page later shows up to spoil Moxley’s spirited champion promo time, but his reaction isn’t nearly as great as MJF or his championship foe.

Following this, we were greeted with the ROH World Championship collision between “American Dragon” Bryan Danielson and “Lionheart” or “The Ocho” Chris Jericho. Man oh man, were these Toronto fans looking forward to seeing Jericho make his grand “Judas” entrance live… myself included! But don’t count out the ever-so-devious Jericho as he makes his entrance to “Lionheart” music and graphics… much to the crowd’s and my own dismay. Nonetheless, the crowd isn’t able to hold this against Jericho for much longer, as they go ahead and sing Judas anyways, chant Y2J in patriotic pleasure, and even take the time to voice their love for another Canadian and Jericho Appreciation Society member, “Daddy Magic” Matt Menard. The crowd adores Jericho and Menard, but they choose to go ahead and boo Danielson, not even falling for his attempts to get the opposing crowd to cheer by his side. Very rare to see a crowd completely against the always-popular “American Dragon”. 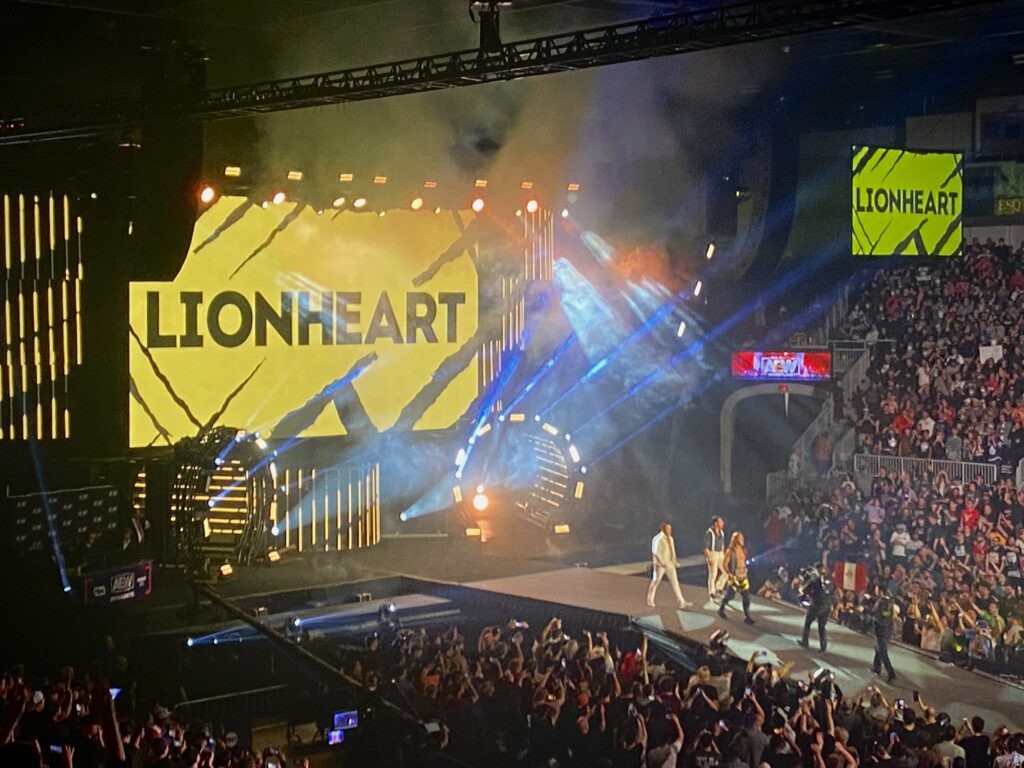 Although the Toronto crowd has been roaring and blowing the roof off the Coca-Cola Coliseum for their fellow Canadians, the reaction for Jamie Hayter would have you thinking she was an honourary Canadian too… either that or  Hayter is simply the most over female talent in the entire AEW locker room. Wherever AEW has gone in recent months, Jamie Hayter has been able to garner quite the generous crowd reaction despite her status as a ‘villain’. Hayter chants run wild and jeering for anything Hayter does during her tag-team bout is quite noticeable. I think it’s sooner rather than later when we see Hayter have a championship belt wrapped around her waist… at least that’s what I hope! She is quite talented indeed and seems to have fan connection down to a T.

In the main event, both PAC and Orange Cassidy are recipients of worthy reactions by the Toronto audience, but you can tell the crowd seems to be pulling a little bit more toward the favour of “Freshly Squeezed”. These two men put on an absolute barn-burner of a main event to close out AEW Dynamite’s inaugural edition north of the border, with the crowd going home to a roaring and joyous championship celebration for the newly crowned AEW All-Atlantic Champion, Orange Cassidy!

All in all, the environment inside Coca-Cola Coliseum for AEW Dynamite live in Toronto was a more than pleasurable experience! As a fan, it was truly exciting to be amongst the passionate crowds I’m used to seeing on TV every Wednesday night. As it seemed, the party didn’t end just yet as Orange Cassidy celebrated his huge title win. Outside the coliseum lied hundreds if not thousands of departing fans continuing their singing in unison of Jericho’s “Judas” theme song and a sea of scissoring happening all around me as I made my way towards the exit. There were also post-Dynamite after parties advertised at nearby clubs and lounges, so I think the AEW Toronto crowd were ready to keep the spirit alive well into the midnight hours. Although I skipped out on these Dynamite extracurriculars, I truly enjoyed my time at the show and cannot wait to go again!