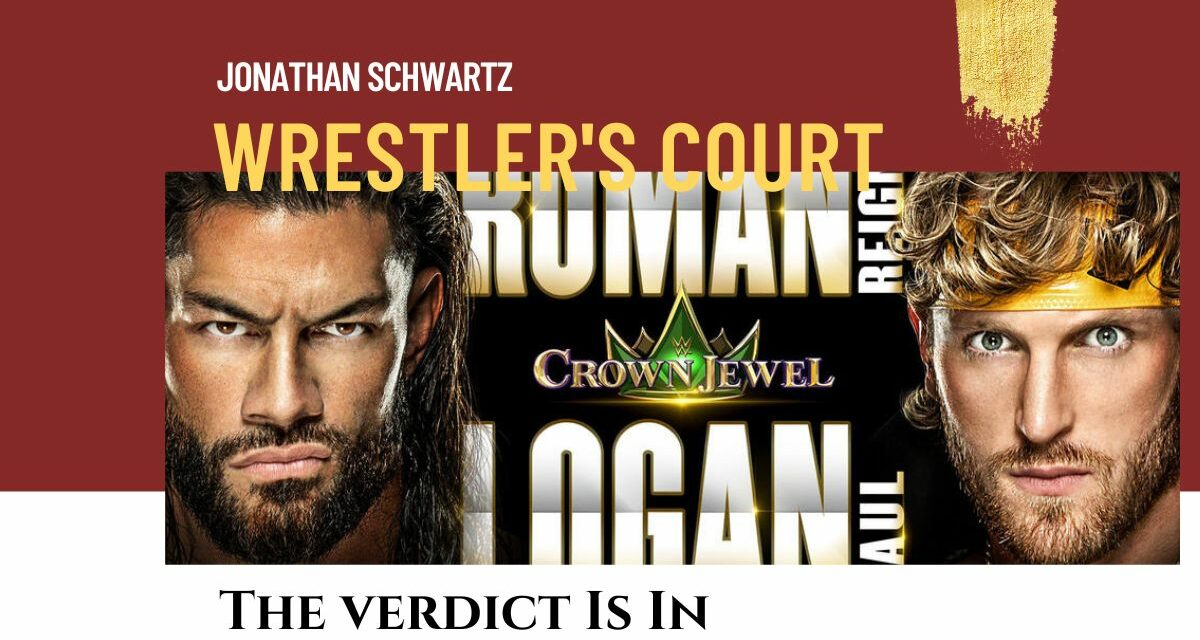 On November 5, WWE will present its latest show from Riyadh, Saudi Arabia. WWE has been promoting events there since 2014. Since 2018 those events have been marketed as major pay-per-views, er, premium live events. Aimed at a very limited audience within that country, it often feels like significant events which take place there somehow exist out of continuity with the rest of WWE’s programming. In other words, Crown Jewel and other Saudi Arabian pay-per views like Super Showdown, the Greatest Royal Rumble and the most recent Elimination Chamber, take place in wrestling’s real “Bizzarro World.”

Canadian wrestling fans are used to WWE commentators describing our response to their shows as “Bizzarro World” because of our impassioned, often off-script reactions to the entertainment they provide. Fans in wrestling hotbeds like Toronto, Montreal and Calgary have an intense relationship with their favorites. We celebrate our homegrown wrestlers and cheer for them when they make the world’s biggest stage-and why not? We’ve often been along for the ride since their time on local indies. How could we ever boo Bret Hart or Edge or Kevin Owens or Sami Zayn when we cheered for them in barns or municipal arenas or high school gyms not so long ago?

It’s no coincidence that once they arrive in WWE, these wrestlers and others are often programmed as heels. For starters, it disinhibits characters who might otherwise come across as milquetoast due to our inherent “politeness” (I disagree with that notion, but then in my own limited appearances on podcasts and the like I’m often accused of being polite. I see it as just not being a jerk, but different strokes for different folks). It also takes advantage of the differences in language or accent or culture that are magnified in the stereotypical world pro wrestling. As far back as the Vachons, Wolfmen, Yukon Lumberjacks and LeDucs, Canadians have often played specific ‘lumberjack’ or bloodthirsty ‘wildman’ characters before US audiences. As wrestling became a bit more sophisticated, Bret Hart, Lance Storm (along with Test and Christian), Iron Mike Sharpe and others were heels because they were “Canadian”, thus “different” from the US audience. In a mildly xenophobic world, a maple leaf was enough to break one bad.

Within Canada the dynamic gets more complicated. Owens and Zayn received heroes’ welcomes on the latest Canadian Raw and Smackdown… but that tour started in their home province of Quebec. Have them cut promos in French for an anglophone audience and I bet they’d be booed lustily, just as the Fabulous Rougeaus or Dino Bravo were back in the day. Fun fact: one of the first wrestling shows I attended featured a Fleur de Lis clad Bravo challenging Randy Savage for the WWE championship. A full Maple Leaf Gardens chanted “USA! USA!” at the local/foreign heel. It was a lesson in Canadian politics that I still remember. 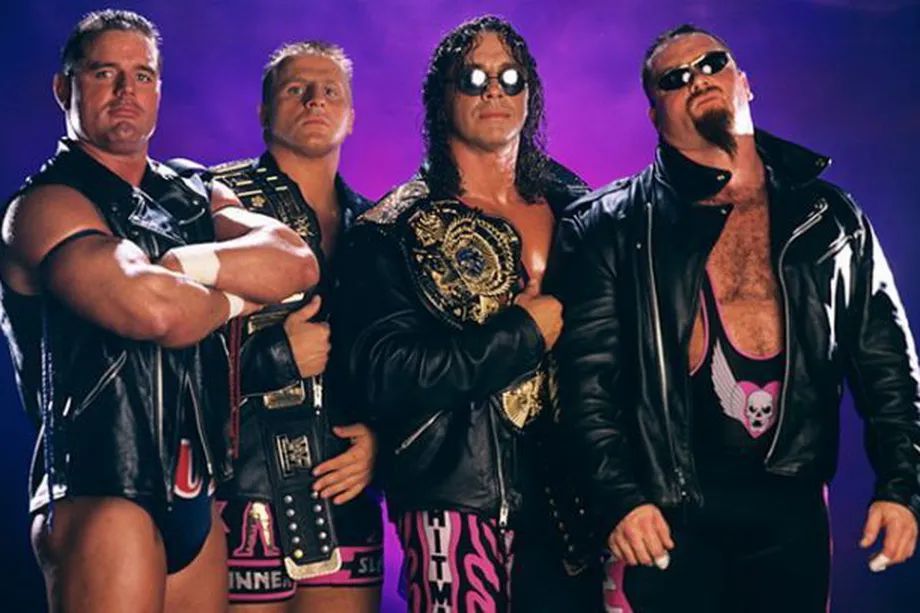 The most successful iteration of Canadian “Bizzarro World” must be Bret Hart’s late WWE heel run. Hart uncorked vitriolic promos with a believability most of us didn’t know he had, turning on the United States and all it stood for despite his own dual citizenship. Hart’s heel turn saw him reunite with his estranged brother Owen, brothers-in-law Jim Neidhart and Davey Boy Smith, and Stampede alumnus Brian Pillman. The live audience hated it; I was already a young adult by that point, but I loved it and almost misted up at the family reunion. In my books, it didn’t so much turn Bret heel as it turned the other members into full fledged good guys. WWE would go on to brilliantly exploit this difference in perception. The new Hart Foundation was a dastardly heel faction in the US, but still popular everywhere else-especially in Canada, where they received an ovation that rivalled Rock vs. Hogan at a Calgary-based pay per view. Like many ‘foreign’ heels before him, Bret has admitted to feeling uncomfortable in that role-especially as the real-life end of his time with WWE drew closer, but for me it remains a masterwork of multilayered storytelling, drawing a significant part of the roster into its orbit and making a new generation of stars including Triple H and Stone Cold Steve Austin. And it provided me as a Canadian fan with images that still stay with me, including that initial moment where Bret calms tensions between Owen and Davey Boy, and all three men embrace in the ring. Family matters.

But back to the upcoming Crown Jewel card, which is most notable for its main event of Roman Reigns defending his Undisputed Universal championship against Logan Paul, who has had all of two pro matches. 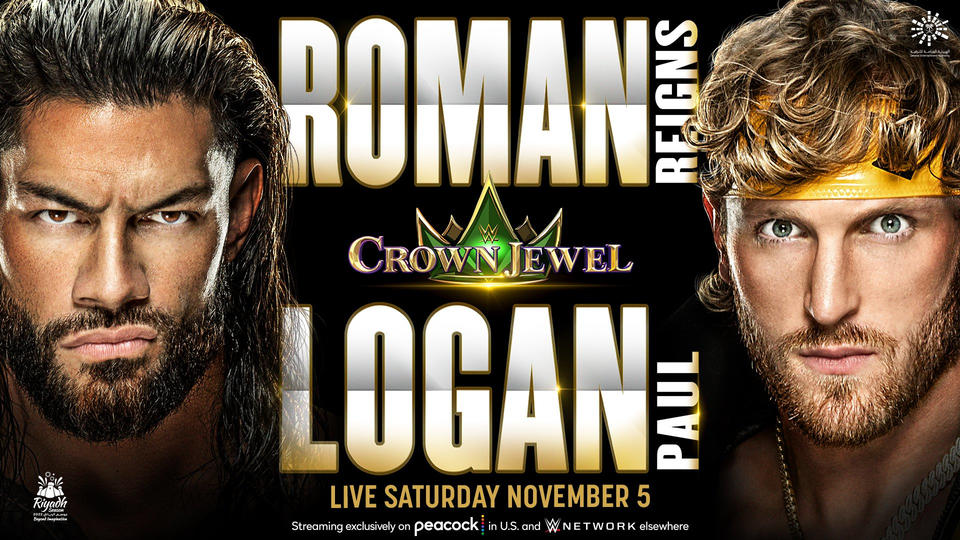 Frequent readers (thank you!) will remember that shortly before Summer Slam, I argued that WWE should sign Paul on the strength of his WrestleMania performance and the fan base he brings from his social media career. I also argued that he should be the one to dethrone Reigns in an upset for the ages and drop the belt just as quickly in order to generate mainstream interest and shake up a title scene that now feels stagnant under a multi-year heel championship run. I admit, Paul getting a title opportunity this early in his career puts the ‘hot’ in ‘hot shot’ but throw enough Bloodline interference (and maybe a run-in by Paul’s brother Jake) into the mix and he can still walk out as champion. A clean win by Reigns feels unlikely in any case, since Logan’s podcast is apparently very popular in Saudi Arabia.

Besides which, a Logan Paul victory wouldn’t be the strangest thing to happen on these cards. Since WWE undertook its partnership with the Saudi Arabian government in 2018 we have seen:

While the cards themselves have generally received positive reviews, the events in question generate a degree of infamy among serious fans in the moment, only to be quickly forgotten by WWE creative staff. For example, Strowman set a record for most Royal Rumble eliminations and Daniel Bryan established a new Iron Man record in the same match. Neither accomplishment seemed to faze anyone by the time they got back to US soil.

Of course, there’s nothing new about the idea that “what happens on the road, stays on the road.” Wrestling history is littered with title changes that took place abroad, only to be undone by the end of a tour or remain unacknowledged in the US. Ric Flair dropped the NWA World title to Puerto Rico’s Carlos Colon, Trinidad’s Victor Jovica and the Dominican Republic’s Jack Veneno to forestall riots; in 1991 he fought Tatsumi Fujinami in a match where the stakes were never made clear. Bob Backlund lost and regained the WWWF World Heavyweight Championship from Antonio Inoki. Giant Baba claimed three NWA title reigns, winning then losing the belt in the space of the American champion’s tour. With the exception of the Fujinami exchange, these changes took place well before the advent of pay-per-view or streaming services. Today we all see the weirdness unfold before our eyes on Peacock, but pay it no heed unless (as in the case of Goldberg’s title win) the cognitive dissonance proves too great. 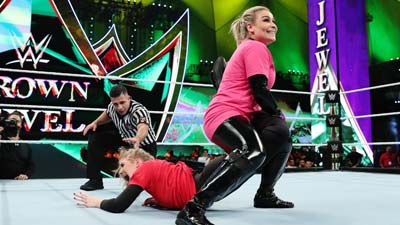 Natalya gets the Sharpshooter on Lacey Evans in the first-ever women’s match in October 2019. WWE photo

Part of the challenge posed by the Saudi Arabian cards is that they are essentially command performances. Officials within the government and members of the Royal Family are said to be WWE fans and are wont to make requests when it comes to who appears and who wins, regardless whether they factor into WWE’s long-term plans. Spotty availability of pro wrestling in the region has led to some disconnects between the ‘E’ and its Royal audience, although the current contract will change that. Still, we see the emphasis on Attitude Era stars like Undertaker, Kane, Michaels or Goldberg (or Jim Ross and Jerry Lawler’s return to the commentary booth on the Greatest Royal Rumble pre-show). Saudi Arabia is also apparently a strong market for other combat sports, which accounts for Velasquez or Paul’s positioning on cards, or the appearances of Tyson Fury and Tareg Hamedi. Rumor has it that in advance of the 2018 show Saudi representatives advised WWE of their interest in seeing Yokozuna and the Ultimate Warrior wrestle despite the fact that both men were dead.

As much fun as WWE’s forays into Bizzarro World may be, they raise important questions about WWE’s leadership going forward. WWE started promoting events in Saudi Arabia in 2014. In 2018 it announced a 10-year strategic partnership with the General Sports Authority (now known as the Ministry of Sport), a government ministry responsible for sports in Saudi Arabia. Per Wikipedia, the Ministry of Sport represents Saudi Arabian sport at an international level and manages the Saudi Arabian Olympic Committee plus a number of Saudi sports federations. This partnership includes hosting a series of pay-per-views in Saudi Arabia, of which there have been seven to date. The partnership was extended in 2019 via an agreement with a different entity, the General Authority for Entertainment (a newer government department that regulates Saudi Arabia’s entertainment industry) through 2027. Both government entities were established by Royal Decree. COVID-19 notwithstanding, WWE has committed to hold two pay-per-views in Saudi Arabia per year. WWE receives approximately $50-55 million from the Saudi Arabian government for each show. For that kind of money, the customer is always right.

A little more than halfway through the current contract, the Saudi Arabian events have raised over $350M for WWE. They have also generated considerable controversy among fans, talent, stakeholders and shareholders. International political analysis is well beyond the scope of this column, but WWE has faced criticism for these shows for its partners’ positions on various human rights issues. Some wrestlers have outright refused to work, citing their own beliefs, human rights concerns, or fear for personal safety in a potentially hostile environment. The current deal was negotiated under Vince McMahon and could be seen as an instance where the company placed profit ahead of people. Objectively, a corporation like WWE exists to make a profit. Part of the big business of modern sports entertainment means recognizing that a corporation either grows (for example, by entering new markets and signing lucrative contracts) or it dies. At the same time, critics suggest that running events in Saudi Arabia will cost WWE a segment of its audience. At minimum this partnership sits uneasily besides the proud all-American image that has defined this company since its national expansion. It may be difficult to reconcile the current shows with the longstanding ‘Tribute to the Troops’ which originally saw WWE perform at Middle Eastern military bases in the wake of 9/11. Depending on global politics and corporate/government interests, when the current deal does expire, one wonders whether WWE’s leadership will take a principled approach, or whether they, like Vince McMahon will resort to the old Groucho Marx line: ”These are my principles. If you don’t like them, I have others.”

All of which makes for an evening of entertainment that often feels out of sync with the rest of WWE’s offerings, and wrestling as a whole. The Saudi Arabian shows make a better claim to “Bizzarro World” than Canadian fans cheering Sami Zayn on Smackdown ever could. And talent seem to recognize it. In an interview with Sports Illustrated leading up to this year’s Crown Jewel, Logan Paul expressed his interest in helping WWE reach new audiences: “This is no diss to the WWE but I told them this before I signed my contract, I’m a good amplifier,” he said, “I crossover big, mainstream events. The WWE is a universe and it’s huge, but I told Triple H I want to make this a multiverse.” His participation and possible victory at Crown Jewel may bring us one step closer to that reality.