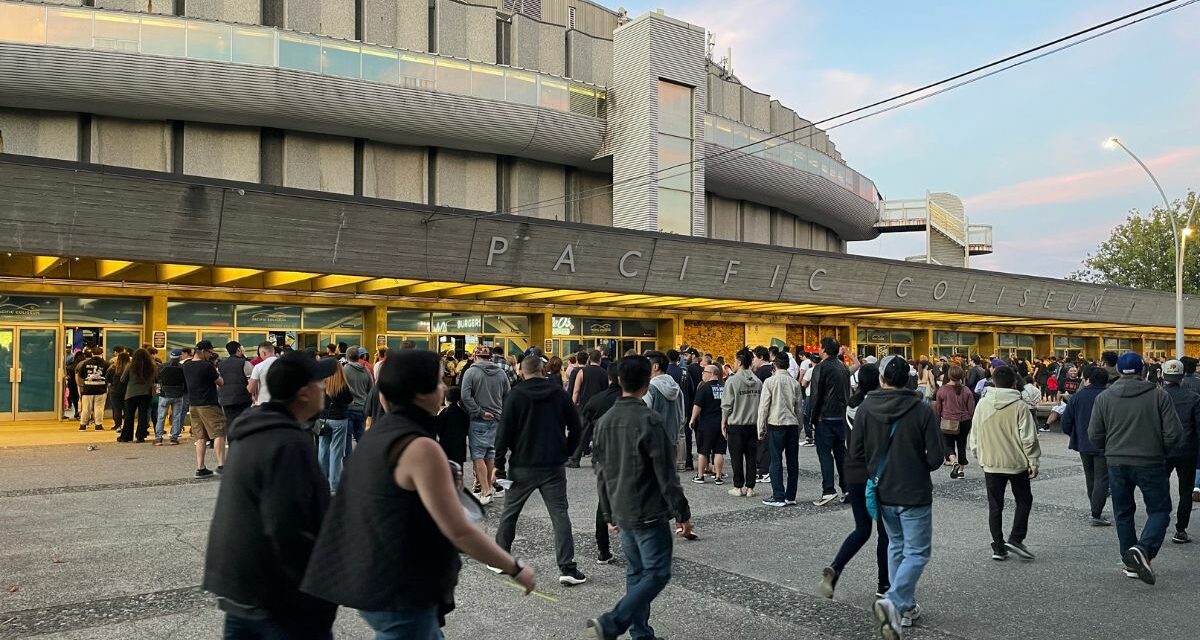 VANCOUVER, BC – The WWE brand flexed its muscles big time in Vancouver on Saturday, September 24, with a Saturday Night’s Main Event card at the Pacific Coliseum.

According to Wrestletix, with close to 8,000 tickets sold the show was essentially a sellout for the setup.

Headliner Roman Reigns was heavily advertised as making a rare live event appearance and title defence, but the large turnout proves that Vancouver is a hot wrestling market and starved for large events.

Recent years have seen WWE use both Rogers Arena in downtown Vancouver and the Abbotsford Centre, with the last stop before the pandemic seeing a live Smackdown on Feb. 14, 2020 draw over 14,000 people to Rogers Arena.

WWE fans on Saturday were loud and boisterous with seven matches over three hours.

MATCH 1 – Chad Gable and Otis vs. The Street Profits

Big pop for the Profits, who actually wrestled their final NXT live event at the nearby PNE Agrodome on Oct. 19, 2019. Gable talked trash on the mic early on and pushed the fact that he didn’t like being in Canada and was a great American. Fast paced match followed with Gable showing off a lot of technical skills and he and Otis got the heat on Montez Ford. Hot tag to Dawkins who cleaned house. Some great spots with Otis as they teased how hard he is to pick up. The finish saw Dawkins escape an ankle lock by Gable, put Gable on his shoulders and tag Ford who performed a blockbuster for the pin. Good opener.

They showed an angle on screen that saw Finn Balor and Damian Priest attack Rey Mysterio and raise doubt about whether he would be able to compete tonight.

Ash played the heel and after some back and forth eventually pinned Brooke and used her feet on the ropes as leverage. New 24/7 champion.

After this match was the viral “white rabbit” trend that saw the lights go out and the 1967 Jefferson Airplane song play. Fans seemed to be completely aware of what was going on and treated it like a Bray Wyatt entrance with their cell phone lights on. Near the end smoke and a red light appeared. Another thing to note is the next wrestler that appeared was Alexa Bliss for the next match.

MATCH 3: Iyo Sky and Dakota Kai (with Bayley) vs. Asuka and Alexa Bliss for the WWE women’s tag team titles

All women involved were over, and Bayley especially had tremendous heat throughout the match. Some very good sequences with Asuka and Sky early on. Kai also sold very well for Asuka. The heels got the heat on Bliss for a long time and she eventually made the hot tag to Asuka who dominated. Interference by Bayley distracted Asuka from a finish and Kai made a blind tag to Sky. Asuka locked Kai in the Asuka lock but Sky, the legal wrestler, moonsaulted onto a prone Asuka for the win. Very fun match.

Austin Theory then arrived to massive boos and talked himself up. This brought out Kevin Owens to an enormous pop wearing a Vancouver Canucks jersey. Owens and Canucks head coach Bruce Boudreau (who is a huge wrestling fan) have developed a friendship of sorts and recently met at the NHL Draft this summer in Montreal. Owens said Boudreau gave him this jersey, which led to “Bruce there it is” chants. Owens then challenged Theory to a match for his Money in the Bank briefcase but Theory declined. They agreed to have a match but just not for the briefcase.

The match started off with a good old-fashioned hockey fight to a big pop. Owens mostly controlled the match with Theory getting in a few shots. They went to the outside and again Owens controlled. Theory was hit with a swanton but kicked out. The finish saw Owens hit a stunner. Another good match that the crowd was invested in.

MATCH 5: The Miz vs. Matt Riddle

Miz buried Vancouver on the mic prior to the match and stated that he’s made a lot of movies in Vancouver but has outgrown the city. Riddle came out to a decent response but was on the lower level of popular babyfaces. Miz actually looks to have gained some muscle and took off his shirt dramatically to start the match. Stalling by Miz and he outsmarted Riddle for most of the early match. It felt as though the crowd was exhausted early into the match, but really picked up for Riddle’s comeback and the pair received a “this is awesome” chant. Finish saw Riddle apply a sleeper for an extended period of time only for Miz to escape but then run into an RKO.

Balor took the mic and stated that Mysterio will be unable to compete and told the ref to count him out. Mysterio showed up before the 10 count to a big pop. This is only his fourth appearance ever in Vancouver with WWE and only the second since 2009. Balor was aided by Priest early on as they cheated to gain the advantage. The ref then spotted Priest cheating and he was booted out. Mysterio then took over, hitting a hurricanrana from the top rope and the 619. This brought out Dominik Mysterio who distracted his father and Balor rolled up Mysterio with help from Dominik for leverage.

MATCH 7: Roman Reigns vs. AJ Styles for the WWE Championship

Styles arrived to a good pop, but Reigns was incredibly over in Vancouver. He took his time in the entrance and let the music play for several minutes before appearing. The ref rung the bell but then Reigns grabbed the mic and said he fulfilled his obligation and would know leave. He began to leave but Styles questioned his manhood and he returned.

Great match followed, with Styles kicking out of the Superman punch and Reigns managing to get to the ropes from the calf crusher. Both guys worked really hard and the finish saw Reigns duck the phenomenal forearm and hit the spear.

Overall, I’d say it was a good show helped by a tremendous crowd that was hungry to see some of the biggest stars in WWE.

Match of the night: