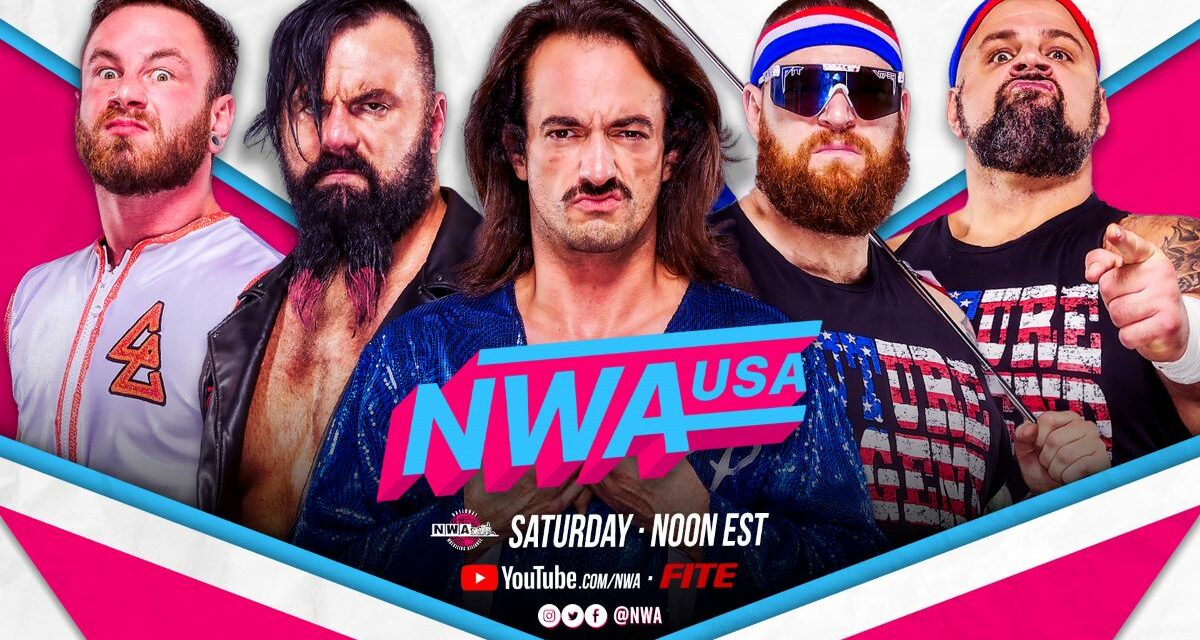 The title picture is getting more exciting as some promising challengers are looking to scramble in the main event for a shot at the Junior Heavyweight title, and the “Thrillbilly” Silas Mason is facing his toughest test yet against Judais, as both men look to make their mark in the NWA National title tournament. Plus, Tyrus speaks on the aftermath of NWA 74 as he reflects on his loss

We’ll see more in the main event at the Skyway Studios in Nashville, TN. Joe Galli, Tim Storm, and Velvet Sky have the call, but we head right to… 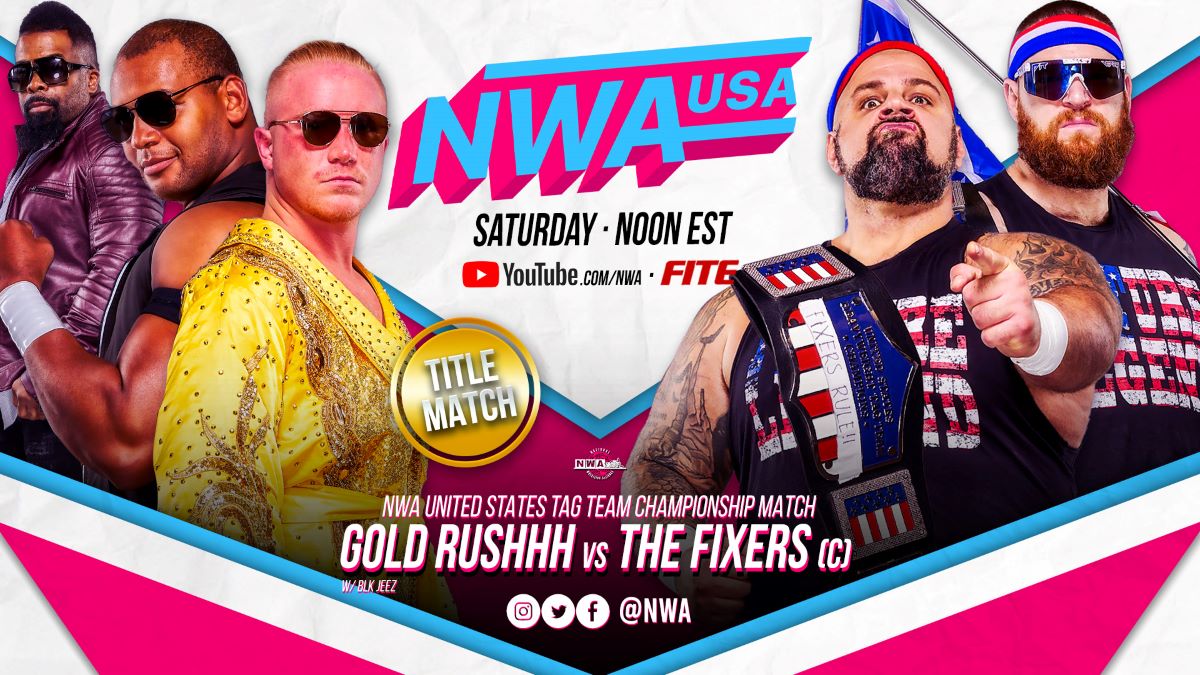 Legursky starts strong against Clearwater.   The Golden Boy gets one up on him and he starts to gloat a bit and gyrate a la Rick Rude, but Legursky takes offense and then head butts and gyrates for the…err, pleasure(?) of the NWA fans in attendance.  Tag to Bradley and he rams Clearwater’s head into Legursky’s armpit, and that’s just nasty, boys (see what I did there?  Eh?  Ehhh?).

Anyway, tag in to Rockett, and Bradley takes it to him by using Legursky as a weapon to ram Rockett like a wrecking ball (okay I’ll stop with the puns now).  The Fixers are dominant, and then Clearwater steps in, but the ref tries to hold off before a tag by his partner can be made.  Jeez distracts on the other side for Bradley, and Rockett rolls out as Bradley misses the corner elbow drop.  Now Gold Rushhhis in control, as Clearwater and Rockett keep Bradley isolated, making him a Boss in Peril.  Rockett with a beautiful standing dropkick, and Clearwater nails a leg drop for just a two count.  Clearwater gets cocky and attempts a suplex, but Bradley reverses and manages to get the hot tag to Legursky and he is a Fixer en Fuego crushing the opposition…literally.  The end comes as The Fixers hit a double powerbomb to get the pin and defend the belts.

Your Winners via Pinfall, and Still NWA USA Tag Team Champions:  The Fixers

Now we get the NWA World Television Champion Tyrus, as Joe Galli gets the answers straight from the Manster himself in a recording earlier.  Tyrus is wearing sunglasses, and Galli asks what he’s feeling and what’s next for him.  I’ll let the Manster himself speak:

“There is no next, Joe. I was undefeated, Joe. I sold out that arena, Joe. I flew my family in, Joe.  My mentor was there, Joe.  Trevor Murdock pinned my shoulders; one, two, three. But who beat me? Who beat me? You know that moment, you called it. You saw it. He was standing right here. He was down. He had nothing left. Jeezy was where he was supposed to be. Jeezy was screaming, ‘Do it. Do it, T. Do it.”, and I made the biggest mistake of my career.

Because…you know why? I thought about my family in the stands. I thought about all the people watching because I want to do it the right way, Joe.   You know what the right way would have been was planting that belt so deep inside of his head he’d still be asleep. He would probably be in a wheelchair right now. You know, what we’d be talking about right now? We’d be laughing.  Two-strap Tyrus. But we’re not. I ain’t talked to my kids. I ain’t talked to my family. I don’t answer my phone. There’s only one thing for me and that’s get back.  So whatever I have to do, if I have to give up the thing I love most…

Dusty Rhodes was my mentor. This was his when I came here.  When Mr. Corrigan brought me in, and I saw Pope smile up and down the hallway with this, it was all I thought about; all I trained for. And I should have been content to be the greatest World Television champion in NWA history. Funny thing about championships…there’s really only one, and that’s the NWA Ten Pounds of Gold, and I blew my opportunity. So once again, here’s a life lesson, Joe. Sometimes, you have to give up what you love the most to get what you want.”

Yeah, that was a bit of a surprise right there, and that brings us to Kyle Davis in the NWA Control Center, confirming Tyrus will cash in the NWA Television championship for another shot at the Gold. Apparently, this will take place at Hard Times 3 and even though Matt Cardona and Trevor Murdock are slated for the main event, it’ll be a three-way match.  Davis also confirmed that Tyrus can hold on to the Television title until a new champion is crowned.

But we need to head to ringside for the next match, and it’s for… 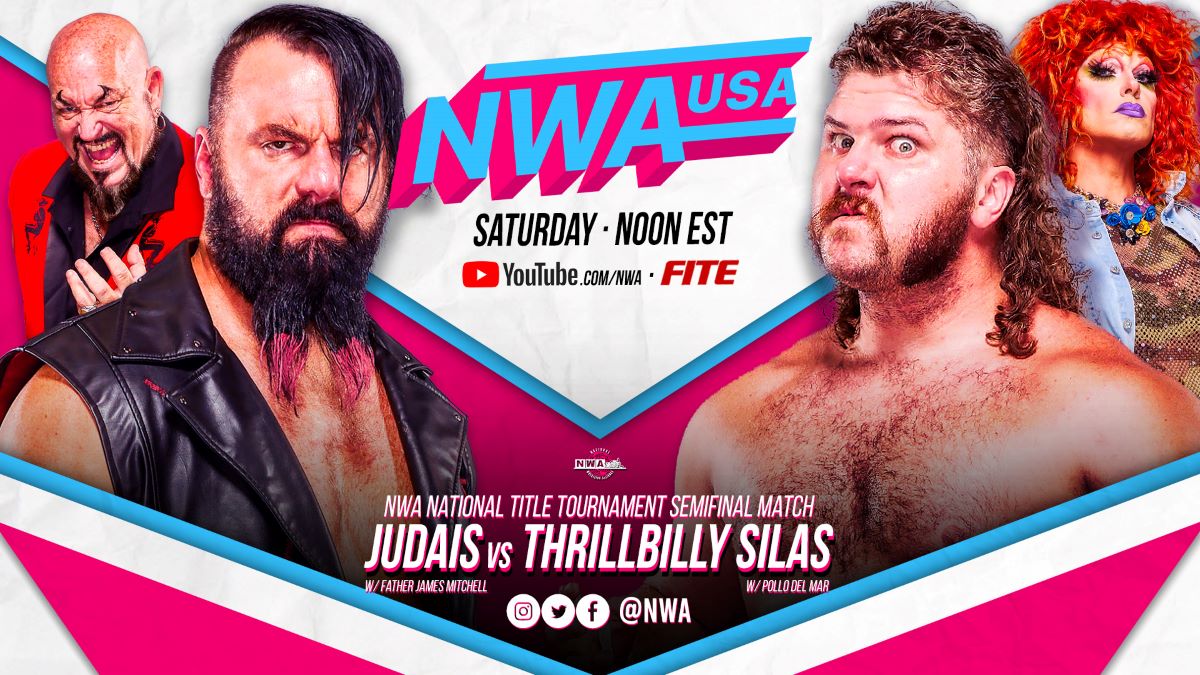 Mason puts the bad mouth on a fan that was trying to disrespect his “little lady” Del Mar, and you can tell he is ready to take Judais on a ride.  This is just a “big hoss” match, as neither man is giving an inch.  Judais soon gets control ramming Mason’s head on the top turnbuckle.  He then gets Mason’s upper torso on the ring apron and proceeds to club his chest.  Judais gets the apron on Mason’s head before kicking it in.  As things look dire, Del Mar distracts The Priest of Punishment, and Mason tugs on his double beard on the top rope to stun the big man.  Now Mason is in the driver’s seat as he whips Judais hard into the corner and follows up with a back body drop.  He attempts an elbow drop but it misses the mark as Judais rolls out in time. Now both men are swinging for the fences, but Judais gains the advantage with a fallaway slam to cover for a two count.  He lands a running boot on Mason in the corner and then a flying clothesline. Judais delivers the choke slam, but Mason manages to roll out of the ring before he could capitalize.  As Mason tries to get his wind, Mitchell stalks him down, but Del Mar defends her man.  That’s enough time for Mason to find his second wind and he lands the Thrill Ride on Judais for the pin and the win.

Your Winner, and Advancing in the NWA National Title Tournament:  “Thrillbilly” Silas Mason

May Valentine is backstage with Anthony Mayweather discussing his up and downs in the NWA>  He admits things haven’t been going this way, but before he can go on with that he notices Chris Silvio, Esquire is spying on him. Silvio comes into the picture, and Mayweather states he’s got no time to focus on him or Jax Dane and wants to focus on things like getting a spot for the NWA Television Championship. Silvio calls Mayweather a “fair weather” person in the NWA, and it just so happens his client Dane is signed up for the Television title as well.  Mayweather has had it and he attempts to accost Silvio as the backstage crew gets in the middle to break it up.  Well, this escalated quickly.

We get a recap of NWA Powerrr, as Thom Latimer helped Bully Ray against The Cardonas, but read it here to catch up on what you missed.

Now let’s get to the Main Event, and it’s a… 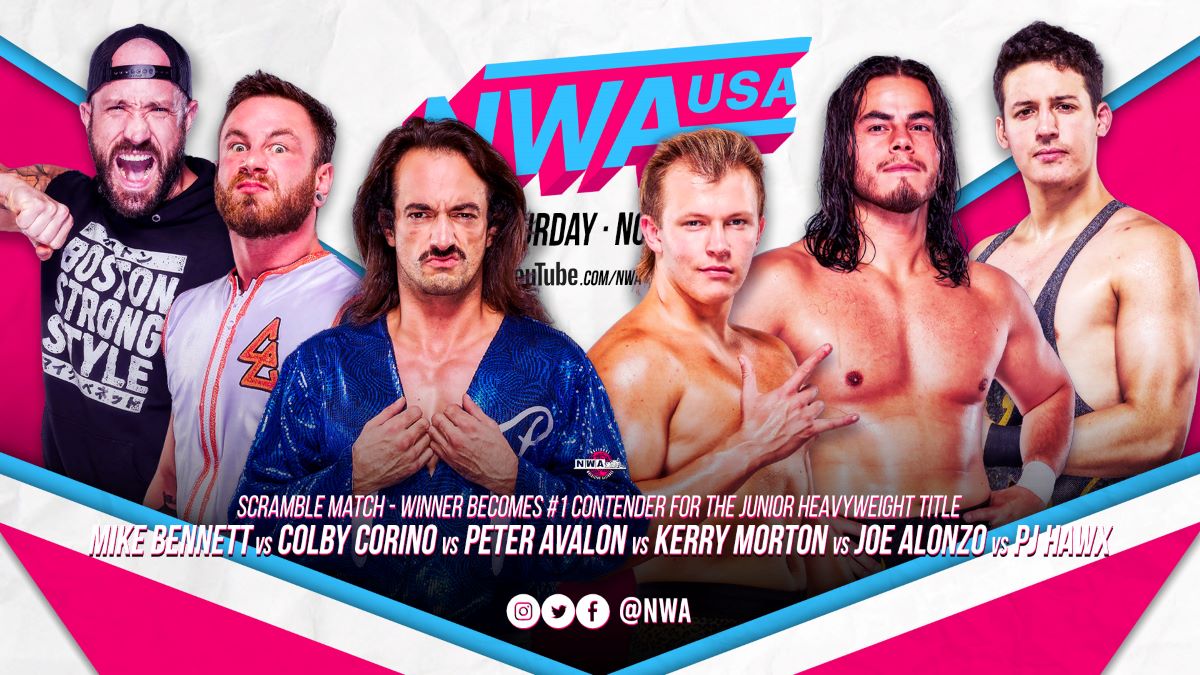 This is the first time that Avalon has been seen in the NWA since the UWN PrimeTime Live events, and he adds a lot to the new junior heavyweight picture along with the established wrestlers of that block.  As everyone tries to jockey for position, Avalon preens like a p[eacock before he kicks Hawx and Bennett out of the ring.  Now Alonzo sends out Avalon and he and Morton are left, and Alonzo lands a springboard cutter on Morton.  Now Bennett is back in the ring and he and Alonzo trade chops before he nails a DVD to the upstart, followed by a discus forearm.  Corino is back in and he nails a flying forearm to Bennett and follows with a Sonsetter, but Hawx gets his hands on Corino and hits a delayed suplex.  Hawx is ready to teach Corino a lesson before Avalon attacks him from behind.  Avalon gets in some offense with a moonsault press to Hawx and gets him on his shoulders for a fireman’s carry but Bennett kicks him in the head.  Now Bennett and Avalon trade “yay/boo” punches, but Bennet wins out with a brainbuster.  Before he can capitalize on a pin, Corino nails him with a running knee, and then picks him up and nails the Colby Crash slamming Bennett to Avalon on the mat.  Hawx is now back in and hits a gutwrench suplex causing Corino to tumble to the floor.  Now everyone is outside the ring, and Alonzo is in the ring and nails a tope suicida to Avalon and Hawx.  Morton tries to do the same, but Alonzo stops him midway. Alonzo goes for a big move, but Morton delivers the Kiss it Goodbye, and covers for the one, two, and three.

Your Winner, and earning a shot at the NWA Junior Heavyweight Title:  Kerry Morton

Once again, Morton gets another bite at the apple to set up a title shot against Homicide, as the show heads to the credits.

The Six Way Scramble was a tad spot-tastic, but it served its purpose.  Not sure I would’ve gone with Morton, but it’s nice to see the NWA Bolstering the junior heavyweight ranks.  Silas Mason is definitely becoming a guy that is making moves in the NWA, and there will be more of a profile on him in the weeks ahead.

For now, I say to the NWA, “Show me what ya got!”  Until then, see ya next Saturday!