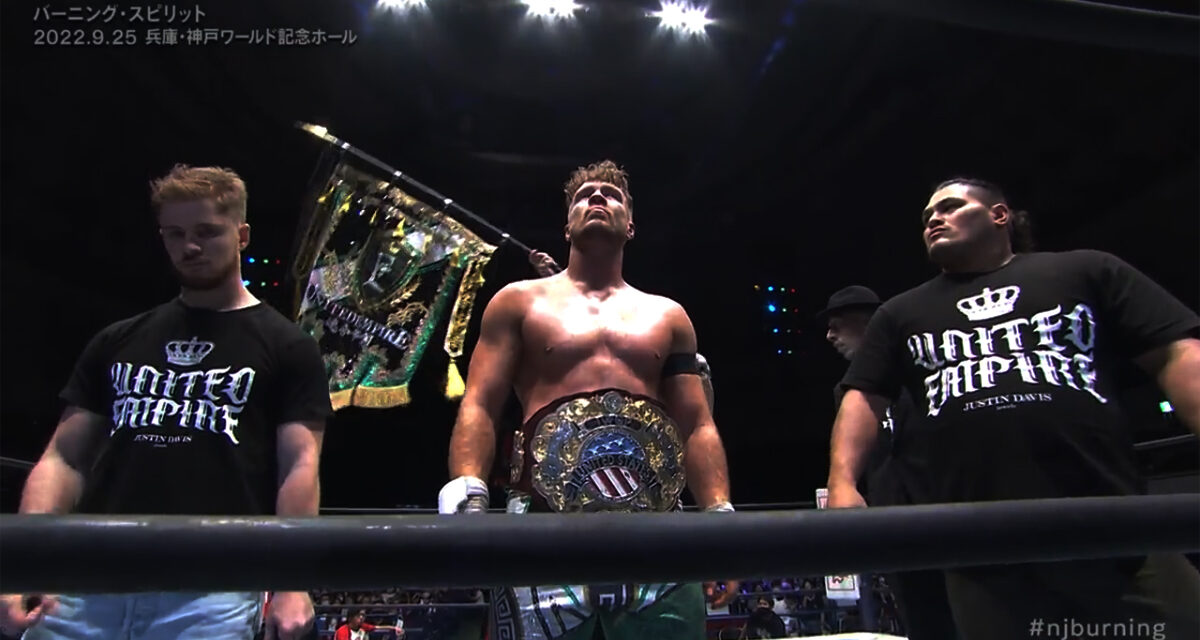 David Finlay’s unfortunate luck surrounding the IWGP United States Championship continued as he lost his his bid to claim the title for the fourth time in his career at Burning Spirit. Like Jay White, it is time for Finlay to move into that main event role though and he proved that tonight in his match against the champ Will Ospreay. A Super OsCutter off the top rope and a Stormbreaker pinned Finlay.

Tetsuya Naito came out while The United Empire was celebrating Ospreay’s win with him. Naito challenged Ospreay to one more match. Before Ospreay could give his answer Zack Sabre Jr. came down to the ring.

“Naito, does this head work? You are going to challenge for the IWGP United States Championship?” he asked.

“I know you beat me in the G1 but this dickhead beat you so we are even, mate,” continued Sabre Jr. claiming he should be the next challenger.

Sabre Jr. challenged Naito to a match at Royal Quest next week to see who fights Ospreay. Naito agreed.

Ospreay couldn’t get a word in as they two argued.

“If it is Naito or Zach Sabre Jr. it doesn’t matter,” said the champion.

Karl Anderson retained his Never Openweight Championship too when he pinned Hiroshi Tanahashi with his Gun Stun. Toru Yano made an appearance fighting off Gallows after he interfered in the match when Tanahashi had Anderson in the Cover Leaf submission. Jay White joined Gallows and Anderson putting the boots to The Ace and Yano. Tama Tonga rushed down to the ring to rescue his pals. He confronted White who begged off until Hikuleo arrived. Hikuleo got in his brother’s face as White stood behind him smiling. 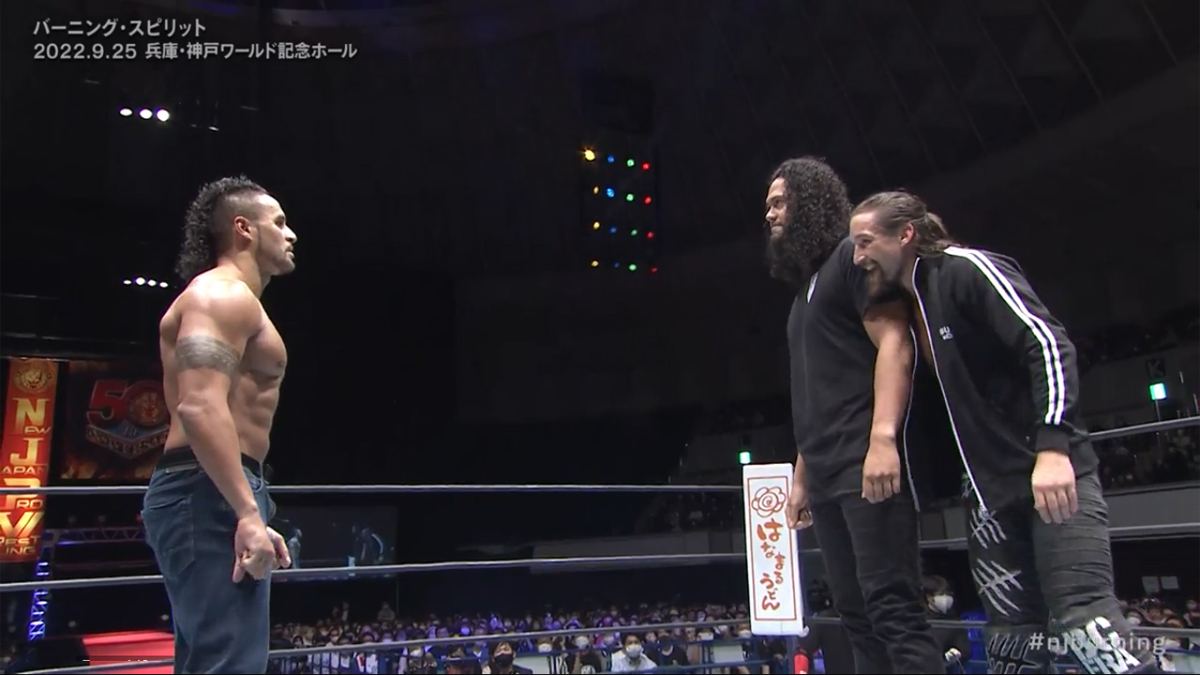 White thinks he has the upper-hand. Courtesy: NJPW.

“Whatcha gonna do now, Tama? I am his family now! Bullet Club is his family!” said White to Tonga. Hikuleo suddenly turned around grabbing White by the throat. Hikuleo threw White into Tama who Gun Stunned him. The brothers then hugged. 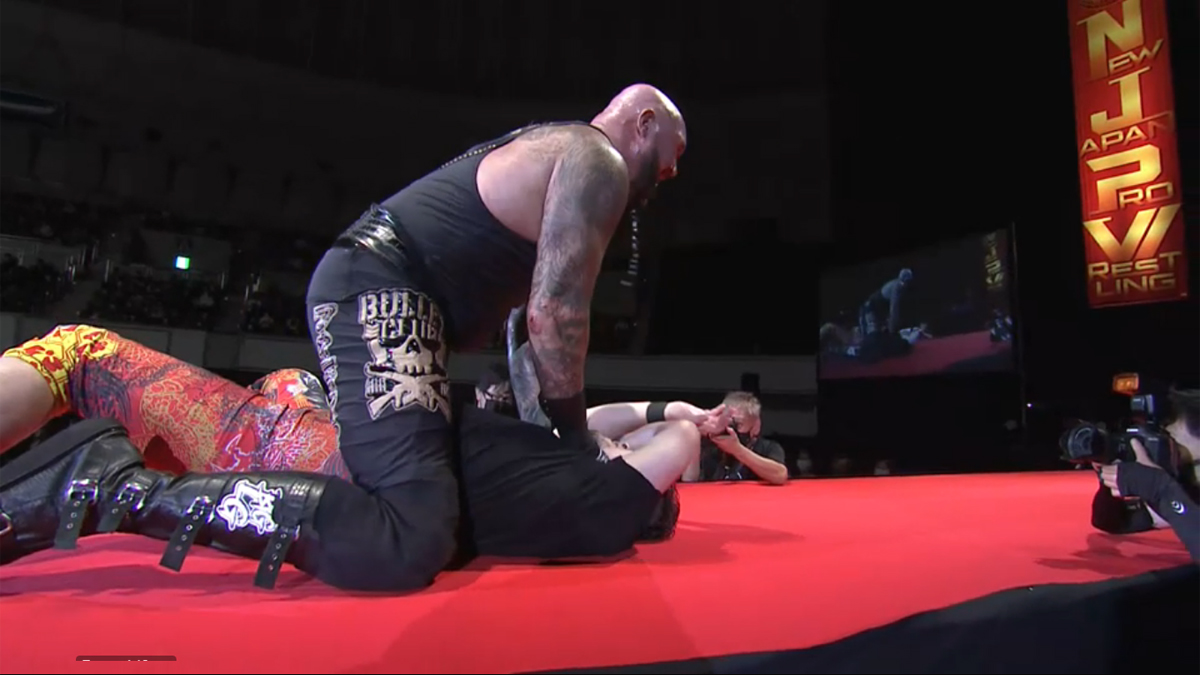 Gallows attempted to get some revenge on Toru Yano in their match. Yano has really pissed him off recently. Gallows attacks Yano before he has even taken his robe off. Gallows punches the crap out of Yano. Yano makes him even angrier by slapping him in the back of the head. Yano gains an upper-hand by dodging Gallows big boot on the floor. Gallows ends up with his leg wrapped around a ringside barricade. Yano kicks the barrier for good measure. On the floor, Yano sprays hand sanitizer on Gallows fleeing up the entrance way. Yano punches him in the “lower abdomen” and tries to tape his legs together. Gallows fights Yano off. He labels him with haymaker after haymaker until both men are counted out.

Takagi kicked Phantasmo in the “lower abdomen” and rolled him up for the pin.

Khan and Cobb pin Owens with the Imperial Drop. The announcers believe this win has propelled United Empire into the tag team championship picture. The belts are currently held by FTR.

Taichi outsmarts Sanada with a clever roll-up. Their feud continues.

Just like their previous match Jonah pins Honma with a Tornado. Okada mocks Kazuchika Okada after the match.

Ishimori makes Jado tap out while Jay White choked Tonga out on the floor with a microphone cable.

United Empire retains when they drop Taguchi with their Leaning Tower finisher.