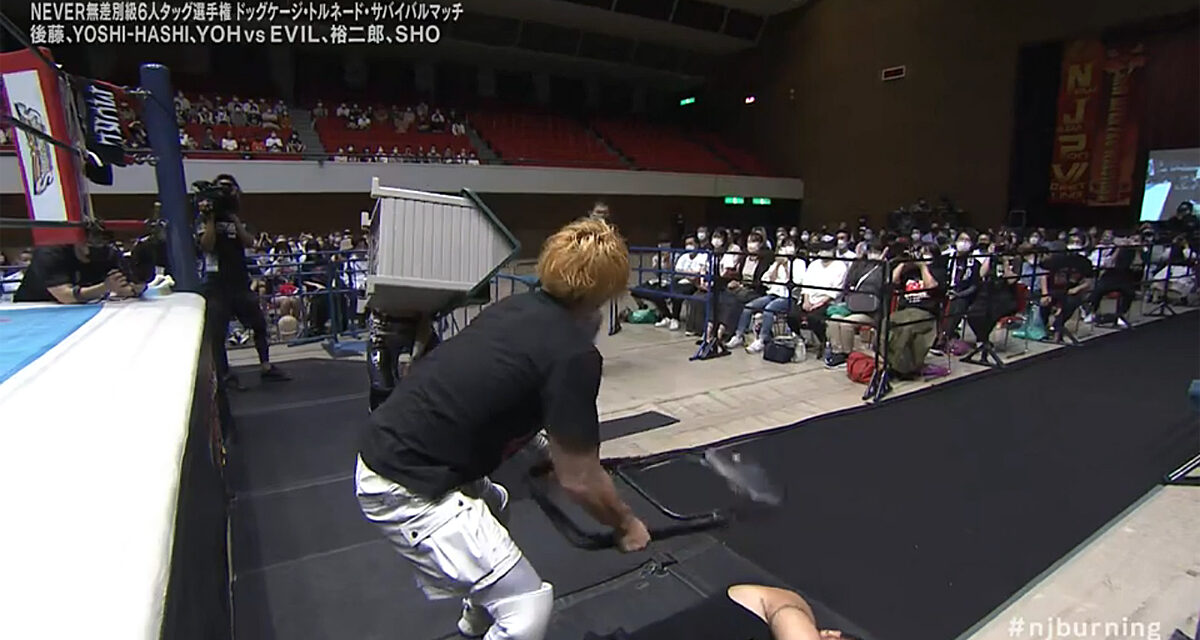 It was survival of the fittest in more ways than one at night five of NJPW’s Burning Spirit tour. Firstly, Hirooki Goto, Yoshi-Hashi and Yoh took on Evil, Sho and Yujiro Takahashi in a Never Openweight 6-Man Tag Team Championship Tornado Dog Cage Survival Match. Say that three times fast.

The idea was that you could lock anyone in one of the dog cages around the ring. The imprisoned wrestlers would have to wait until their partners could free them with keys that were provided.

Goto and Hashi are thrown in and locked in the dog cage first. They could do nothing but watch as The House of Torture beat the snot out of Yoh for what seemed like eons. Yoh finally retrieved the key and let his partners loose. In a funny bit, Yoh puts a dog house over Sho’s head and then hit it with a steel chair. Yoh messes up later on when he accidentally super kicks Goto in the head. Evil pushes Yoh into the official and punches him in the “lower abdomen”. 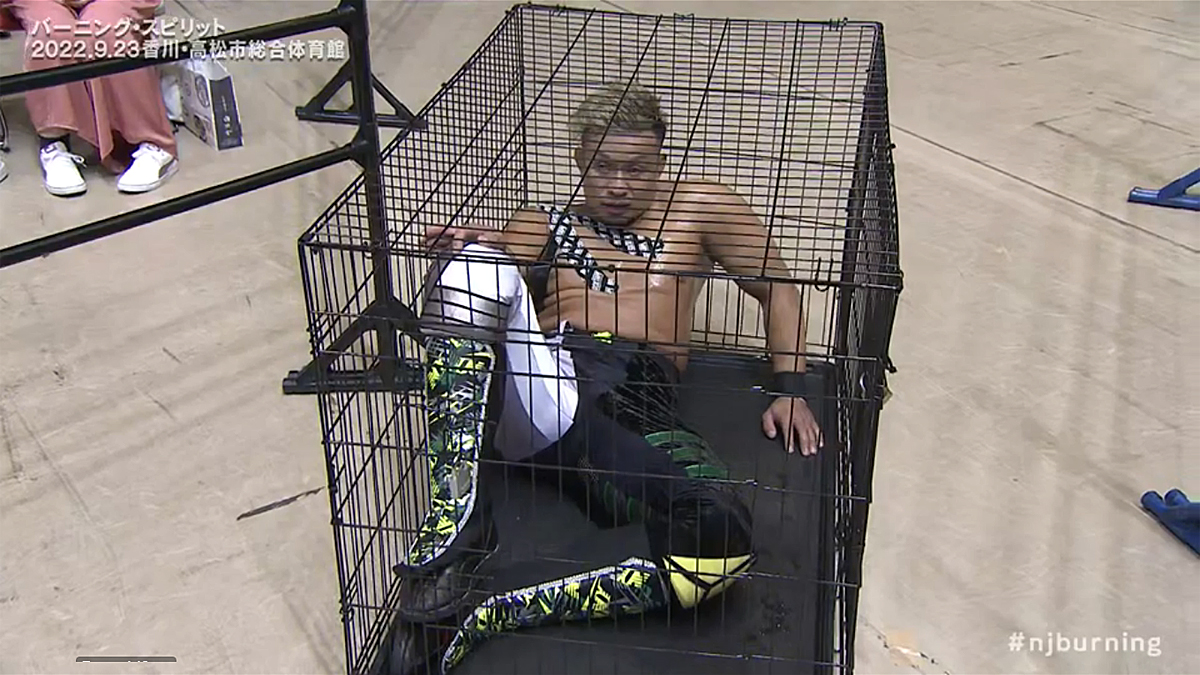 Dick Togo brings a dog cage into the ring for Sho. Sho tries but fails to put Goto in the cage. Sho retrieves his wrench. He misses with it. Togo, Sho, Goto, Hashi and Yujiro are locked in cages leaving Yoh and Evil to fight it out. Evil turns a Direct Drive into Everything is Evil to retain the belts for his team.

The teams of The DKC, Master Wato, David Finlay, Ryusuke Taguchi and The United Empire (Aaron Henare, TJP, Will Ospreay and Francesco Akira) fought in an elimination match in the main event. Finlay, Ospreay and Henare were the final three. Finlay shoved Henare into Ospreay which knocked him out of the match. Finlay pinned Henare at 19 minutes and 51 seconds to be the sole survivor and winner for his team. 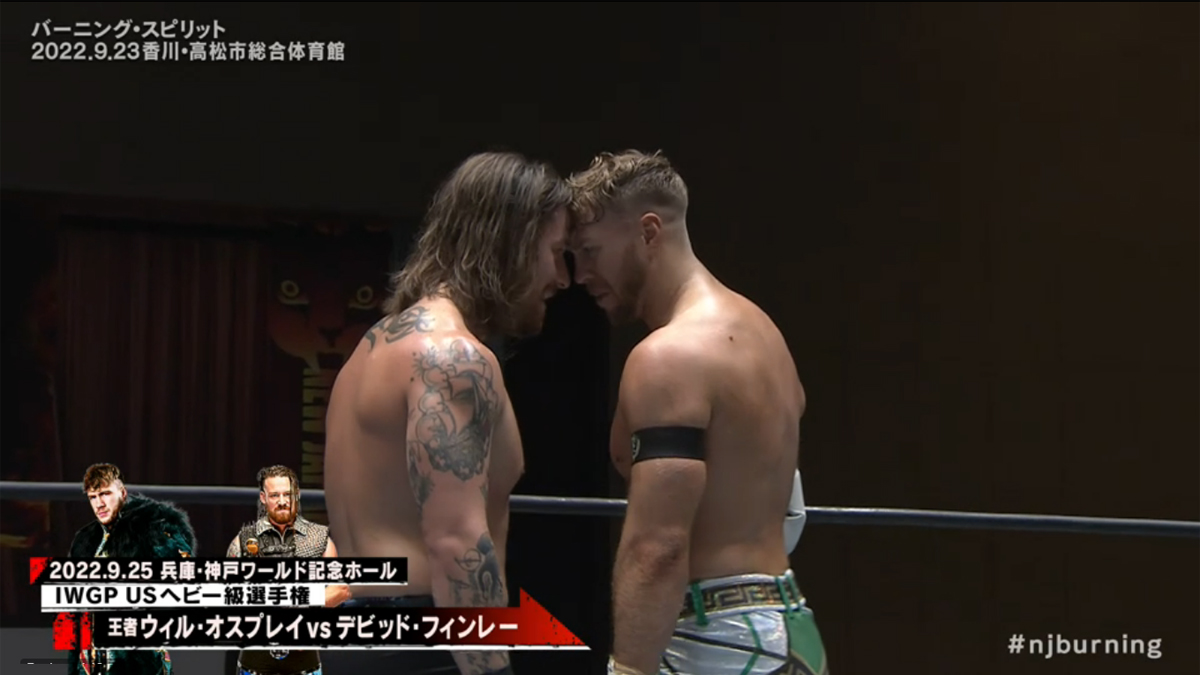 At Burning Spirit on September 25th Finlay will face Ospreay for the IWGP US Heavyweight Championship.

Hikuleo pins Grey with a powerslam and a chokeslam.

Kenta forces Bushi to submit. Phantasmo forgets his t-shirt in the ring. Takagi picks it up and rips it in half.

Hiromu and Taka try to poke each other in the eyes. The official stops them. Hiromu makes Taka poke himself and rolls him up for the win. Zack and Naito get into it after the match. Zach then takes out his frustration on the Young Lions.

Jonah pins Honma with his Torpedo splash from the top rope. Jonah and Okada share unpleasantries.

Yano continues to pester Gallows. He sprays water from the floor into his eyes so that The Ace can roll up Gallows for the win. Yano runs to the back and an angry Gallows follows. The Ace has a stare-down with Anderson and Tonga has one with White.