SmackDown: The Usos remain your champions 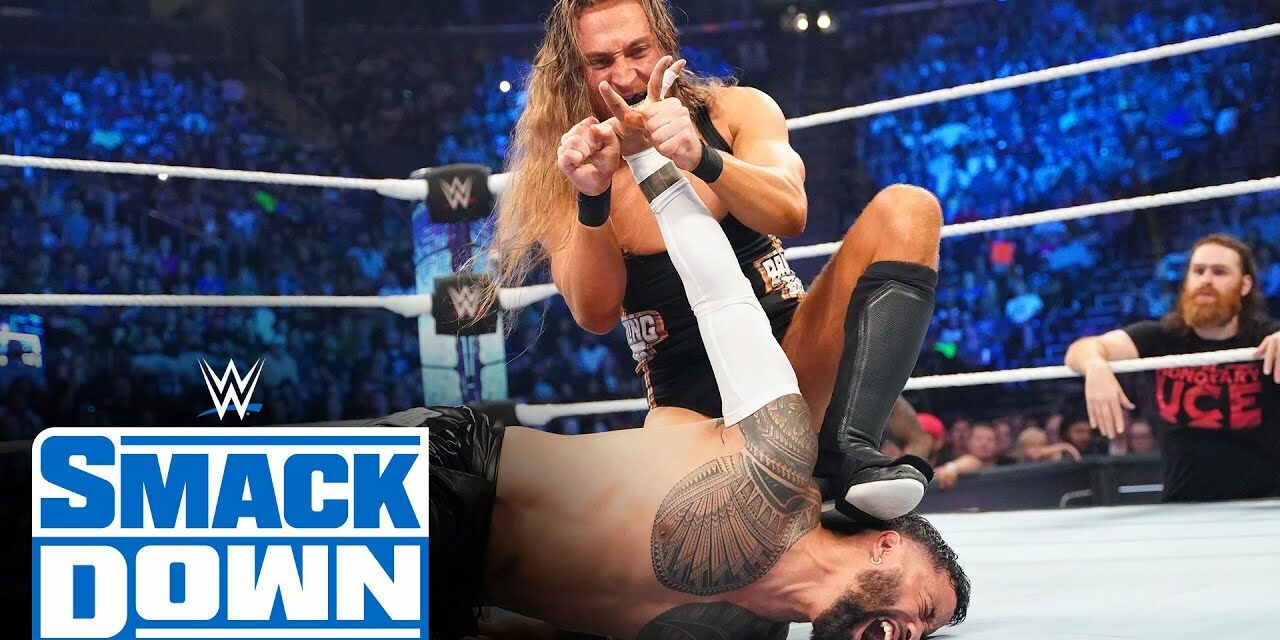 Has anyone else see the press conference between Reigns and Logan Paul last week? I did. The parts I’ll always find funny was when Roman shoved Paul over, then Logan tells Reigns not to touch him. Or when a fan shouted that Roman sucks when that’s not true. Ooh, let’s not forget that Logan called Heyman a “mouthpiece” since he spoke for Reigns the majority of the time.

I was right, Logan is more of an irritant than someone who literally embodies three of the most annoying and/or less favourable creatures. The snake, weasel and rat himself, Paul Heyman.

And speaking of the weasel, he and The Bloodline are here to remind the audience of who truly is on the throne. Conspiracies are being told about the Tribal Chief’s winnings, that he probably should have lost against McIntyre in Whales as well as The Bloodlines’ bond are coming into question. I’m not sure if I beg to differ, but I can see why people are saying what their saying.

Sami Zayn hasn’t changed his nonexistent dancing skills, but tonight he chose to publicly acknowledge Roman Reigns. What we didn’t expect is for Reigns to clap Zayn for wearing their Bloodline shirt. It confused Roman. Not Jey though. He was ALL for it like the unhinged being he currently is. Roman demanded Sami take off The Bloodline shirt. When he wouldn’t, Jey ripped it off of him.

What shocked me even more was that Roman offered Zayn a new shirt with the words “Honorary Uce” printed on it. Well, is there really anything else to say about that? Eh… no. We’ll be here for an hour if that were the case.

Evans believes that Morgan’s most idiotic idea so far was to challenge Ronda Rousey at Extreme Rules in a couple of weeks. Can’t say she ain’t somewhat right. But a challenge is what makes this sport enthralling to watch. So… only partially dumb.

Evans has been in control of this match taking Morgan out with slaps to the face of the insults variety along with brutal slams and punches.

An amusing moment I had to take note of was when Liv was about to jump Lacey, Evans got her first with an abrupt kick that sent Morgan flying backwards whiplashing her. You should have seen Morgan’s face. Ha! So dumbfounded.

Lacey has been way more aggressive since coming from the ashes having Morgan in a chokehold. Evans even went out of her way to get a Kendo stick to hit the champ with, but Liv quickly turns this match around with a neckbreaker followed by an Oblivion for the win.

Lacey was so sure that Morgan isn’t extreme enough to go against Rousey, yet Liv proves her wrong by driving Evans into the barricade with the assist is a kendo stick shouting “I can’t get extreme?!”

Morgan surprises us with a senton to Lacey’s  from the top of the rope, crashing through the table. Tonight, we’ve seen a different side of Liv, but I won’t count my chicken wings till Extreme Rules is here.

Backstage, Sami is being told by Ricochet and Madcap Moss he’s changed. They think Zayn has his head far too hard up Roman’s ass. That upsets Sikoa, so he drops in to shut them up.

As we move on from that, ha!, clips of the Usos’ reign as champs are revealed. They only have two more teams who’ve had a longer reign: The New Day and Demolition. Heyman spoils that the twins will soon surpass them as well.

I put a question mark because I’m confused. This is the randomness match I’ve ever seen. It’s meant to be a redemption fight for the models due to their previous losses.

Ma.cé is tagged in by Man.soor, charges up to Xavier to deliver a hard kick to his face, setting him up for a failed submission. Due to that sudden kick, Micheal Cole said “Mr. Woods you can pick up your teeth in the third row.” Hilariously well put.

Man.soor and Ma.cé work together to plant Woods down with a couple of hits to the mid-section and an elbow to his throat by Man.soor. These guys may be models, but they surprisingly fight well. Their stamina is boosted even higher as Ma.cé knees Kofi off the apron, so Xavier has no choice but to go at it alone against Ma.cé.

The models had a clear shot for victory, I suppose, but rather than cover Xavier, Maxxine decided to start taking pictures, leaving Ma.cé and Man.soor vulnerable for Kofi to swoop in, kick Ma.cé over the ropes, which allows Xavier to roll Man.soor up for a win.

This loss made Max Dupri so mad that he threw away whatever decorum he had left along with his blazer and had a tantrum. I waited for him to crack, and I wasn’t disappointed.

This match starts with a staredown before the two men really begin to have it out. Braun punches Otis into a corner, throws the 360 pounder over his shoulder before slide kicking Otis outside the ring.

Otis does manage to come back with twice as much strength, having Strowman getting his ass beat in the middle of the ring. Otis unfortunately loses his momentum as Strowman performs a spinebreaker then bulldozes Chad Gable into the timekeeper’s area.

Otis take to the ropes and lands on Braun’s abdomen, but that isn’t enough to put Strowman away. So Otis tries again on the other side of the ring and fails due to Braun’s sudden dodging.

Braun has managed to lift Otis last week, so he’s looking to do that again and succeeds for a win.

The Brawling Brutes are fired up for their upcoming match tonight, confident Holland and Butch will become the new Undisputed Champions. I kind of hope not..

It’s going to be an exciting and scary fight, for me by the way.

Anyway, Drew McIntyre is here, and every time he says “Let me hear you scream!” somehow sounds like a serial killer to me. Unintentionally of course. He’s angry that every opportunity Karrion Kross has to face McIntyre, he chooses to attack Drew from behind. Drew announces that they will fight in a strap match at Extreme Rules.

Old habits must die real hard because Karrion beats McIntyre from behind again thinking he’s got him. Drew shocks him with a beating of his own by tying Kross’ hand, so he won’t escape. Delivering hard punches to Karrion’s back one after another and a spinebreaker.

Drew ain’t playing games but Karrion is. Scarlett, Kross’ dark angel, helps by throwing a fireball into McIntyre’s face, destabilizing him long enough for Karrion to choke Drew out. Oof.

Because Aliyah was terribly hurt by Damage Control’s Iyo Sky and Dakota Kai during their championship match Raquel is pissed. When she walked out, she had no smile, just murder on her mind… ha! Kidding. I think.

As the battle begins, Rodriguez takes the attack to Kai by running her backwards into the turnbuckles as Raquel inflicts further pain with a few shoulder tackles.

Next, Raquel has Kai on her shoulders before tossing her onto another turnbuckle. Snake eyes!

Damage Control has the numbers, so naturally, Raquel gets distracted by Bayley and Iyo right after countering Dakota’s attempt at a Scorpion Kick. Kai tries again and lands it because Raquel turned her back on her, which swiftly led to a boot to Rodriguez’ face. Bayley uses this opportunity to add more agony to Raquel’s throat by applying pressure using the bottom ropes while the referee was occupied due to Kai.

Shotzi runs out and helps Rodriguez by taking on Iyo and Bayley. It was mentioned that Shotzi has a huge problem with bullies, these girls from DC just so happen to be a few. Shotzi screws up another spot with Iyo. Can she get anything right?

Raquel gets the victory. Shotzi is thrown into the barricades by Damage Control who attacks Raquel inside the ring. She graciously fends them off with help. Shotzi is labeled as “a ballsy badass,” after all.

Meanwhile backstage, Hit Row and The Street Profits are having a party. A celebration Los Lotharios wasn’t invited to, so throughout the evening, they’ve been trying to crash it. This time they leave a raged up Top Dolla ready to snap their necks because he got Super Kicked in the face. Get these pranc-y boys. Get ‘em.

During this entire match I couldn’t breath. I promise you. It was too cold, so I didn’t have goosebumps, but I was terrified of the twins losing. This fight may have been as odd as kiwis on pizza, but since it was a never before seen battle, I was for it.

Butch has Jey on all sorts of disjointed pains. Breaking fingers and whatnot. A double team by Holland and Butch as they deliver ten haymakers to Jimmy’s chest  as a tribute to Sheamus’ Celtic beauty.

Butch gives Jey a German Suplex that I believe momentarily sent Jey to heaven given the face he makes in those small seconds if you look carefully.

The twins go for a Super Kick, but Ridge briskly counters by lifting both brothers onto his shoulders then slam them on their backs. Ridge takes hold of Jimmy, flips him upside down, so Butch could kick his opponent’s head thinking this was it… til Jey slid in to break the count.

Sami almost does something stupid as he grabbed a steel chair to assist the twins with, he wasn’t able to complete whatever delusional idea he initially had due to Sheamus’ intimidating interference of brawn. Imperium joins in as well, but they just attacked Sheamus.

The way Giovanni Vinci lands on the floor in attempt to grab Sheamus’ legs is too weird that it’s comical.

The scuffle allowed the twins to Super Kick both their challengers before dragging Butch back into the ring for a One D and the win. Those are my boys!!