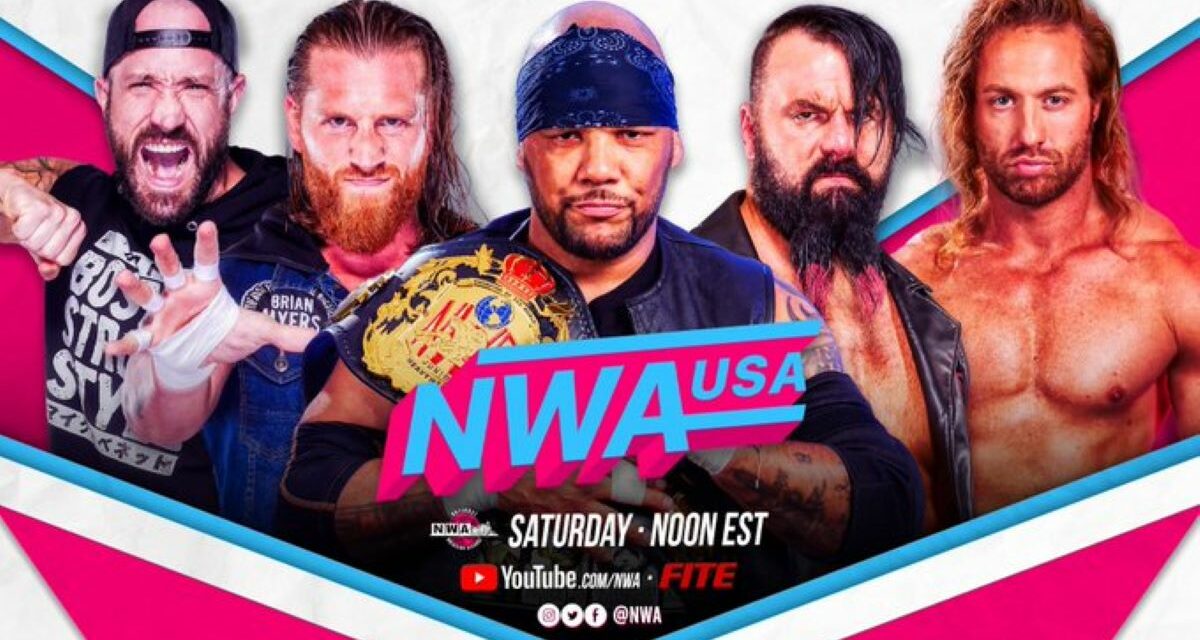 We head to the Skyway Studios in Nashville, TN. Joe Galli, Tim Storm, and Velvet Sky have the call, and our first match is for the… 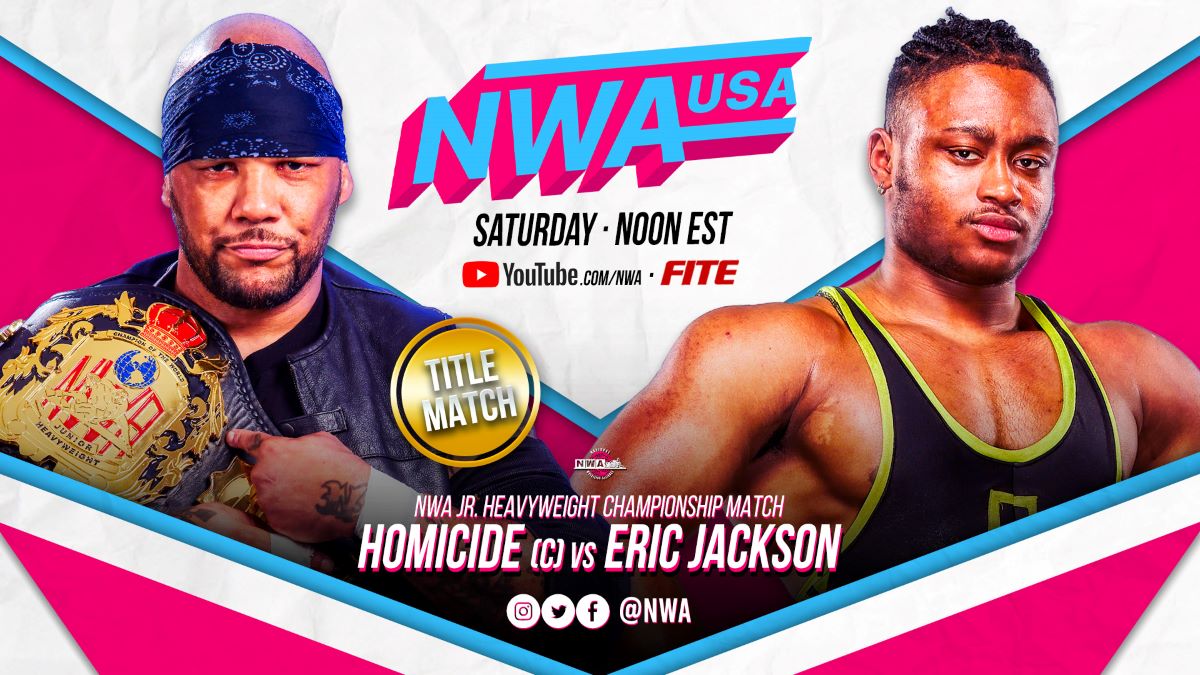 Interesting that they start off the show with a title match.  Storm and Sky debate on the recent attitude of Homicide since gaining the belt.  Sky counters that this is who Homicide has always been, and he’s just going back to his roots.

The start of the match has Jackson tie up and shove Homicide to the corner before the champ shoves back.  Jackson is showing poise with arm drags, and that makes Homicide roll out of the ring to reassess.  Homicide goes back in the hard way with Jackson getting a suplex, but it isn’t long before he gets back to work on the upstart.  He whips him to the corners hard and follows with a backbreaker, along with some fish hooking of Jackson’s mouth.  Homicide attempts the Three Amigos but it gets blocked by Jackson with a rollup for a two count.  Jackson gets a rear naked choke but Homicide escapes. Jackson even gets a sling blade for another two count.  Jackson goes up top with a crossbody for two count. He goes to the well once too often, and Homicide hits a low blow and then lands an underhook suplex for a two count.  Jackson is still hanging with the champ. He tries a missile dropkick that misses, and Homicide puts him away with a Boston Crab and Jackson finally taps.

Joining at the Podium with Kyle Davis are Joe Alonzo plus Austin Idol and (as “daddy” Idol puts it) THE Great Cyon. Davis alludes to Alonzo’s injury by Cyon weeks ago.  He admits he was injured, but Alonzo wonders why the match on next week’s NWA Powerrr is a non-title match. Idol calls him a little leaguer and tells him to eat his baby food.  Alonzo responds that he needs to go back to the nursing home (zing!) Cyon finishes by stating he earned this National title, and he hasn’t.  What he did to Alonzo was a statement, and what he’ll do will be a reckoning.

Well, color me interested in next week.  but Let’s go to the first of the… 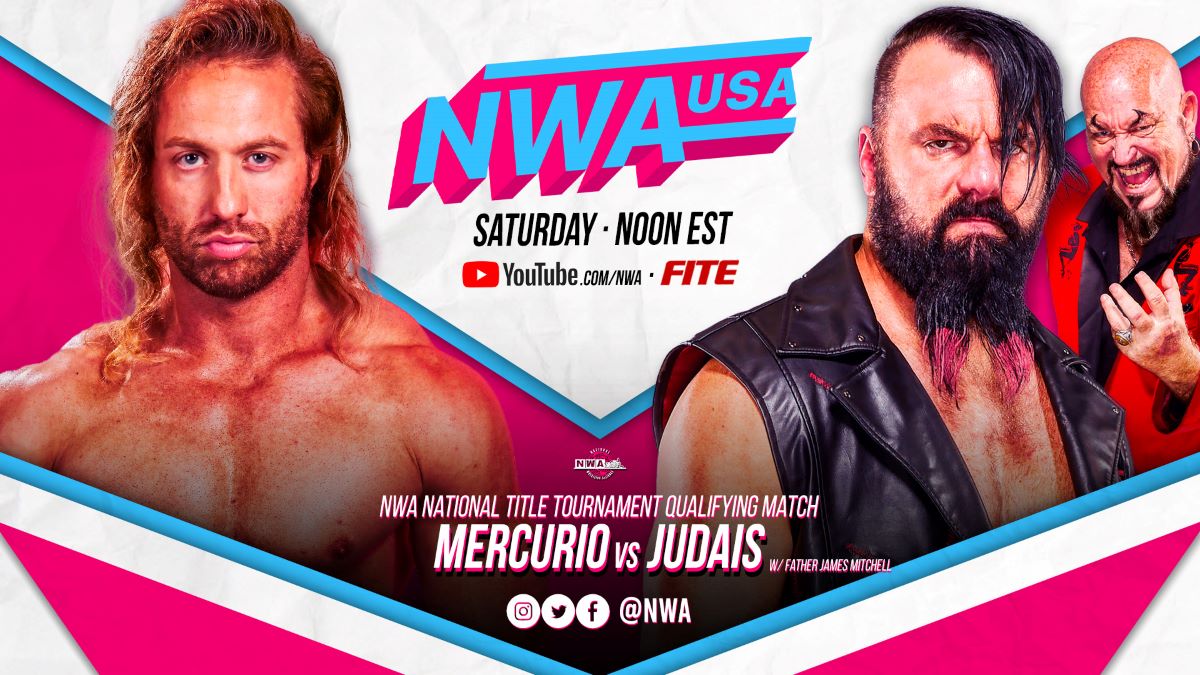 Mercurio gets an early start on the Priest of Punishment, but it isn’t long before he unleashes clotheslines in the corner, and adds pain.  Judais gets Mercurio’s face in the apron and he kicks it hard, to give him “the-a ugly face.”  Back in the ring, there’s a one-armed slam by Judais, followed by Garvin stomps. He goes for an elbow drop and misses the mark.  Mercurio lands with a springboard moonsault that gets a two count.  Judais then gets Mercurio with a fallaway slam and he goes halfway across the ring.  Mercurio attempts another springboard move, but Mitchell trips him up on the outside, and Judais takes advantage.  Mercurio gets in another bout of offense and tries to measure him with a springboard maneuver, but Judais catches because he hesitated too long.  One choke slam later, and buona notte, Mercurio!

Your Winner via Pinfall, and Advancing in the NWA National Tournament:  Judais

May Valentine is backstage with Pope and Kratos, and she wonders why they’re harassing her love, Aron Stevens. They’re not harassing anyone, says Kratos, and everyone knows he is a legit threat to the industry. Pope says he thought Valentine and Stevens were going on a cruise to Brazil (and here she’s a bit crestfallen), but Stevens is cruising for a bruising.

Now Pollo Del Mar comes out with her man “Thrillbilly” Silas to give him some camera time ahead of the National qualifying match with Anothony Mayweather.  He says he’ll show Mayweather what a real man looks like and promises to take him on a thrill ride.

We get a recap of Kamille and Allysin Kay’s match from NWA POWERRR but read here to catch up on the show. 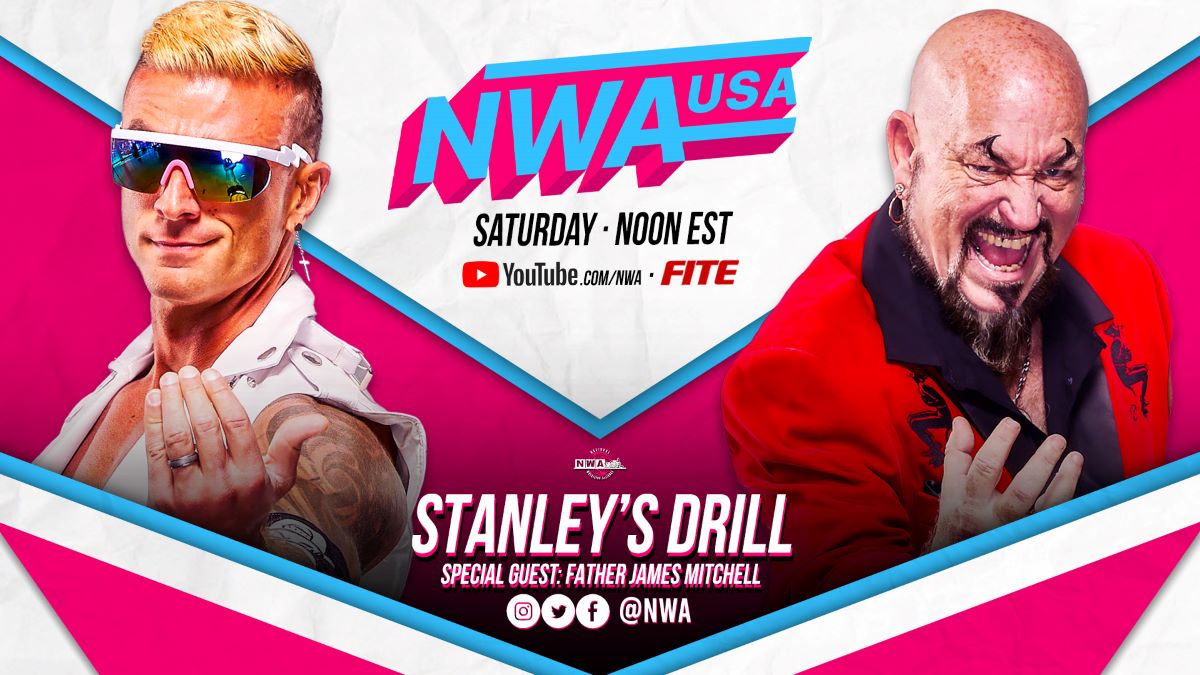 Jamie Stanley is here with another Stanley’s Drill and his guest this week is Father James Mitchell. Thankfully, Mitchell is not his father (plus that would be a gimmick infringement with Austin Idol). Stanley asks where he had his velvet coat made, and Mitchell responds it was from a woman of ill-repute. The best part of the segment comes when Stanley asks, “How does he feel to be in the same room as me?”, and Mitchell deadpans, “Uh, well I’d rather slam my **** in a car door.”

This is why evil wins folks.  They have jokes!

But let’s go to ringside for the second of the… 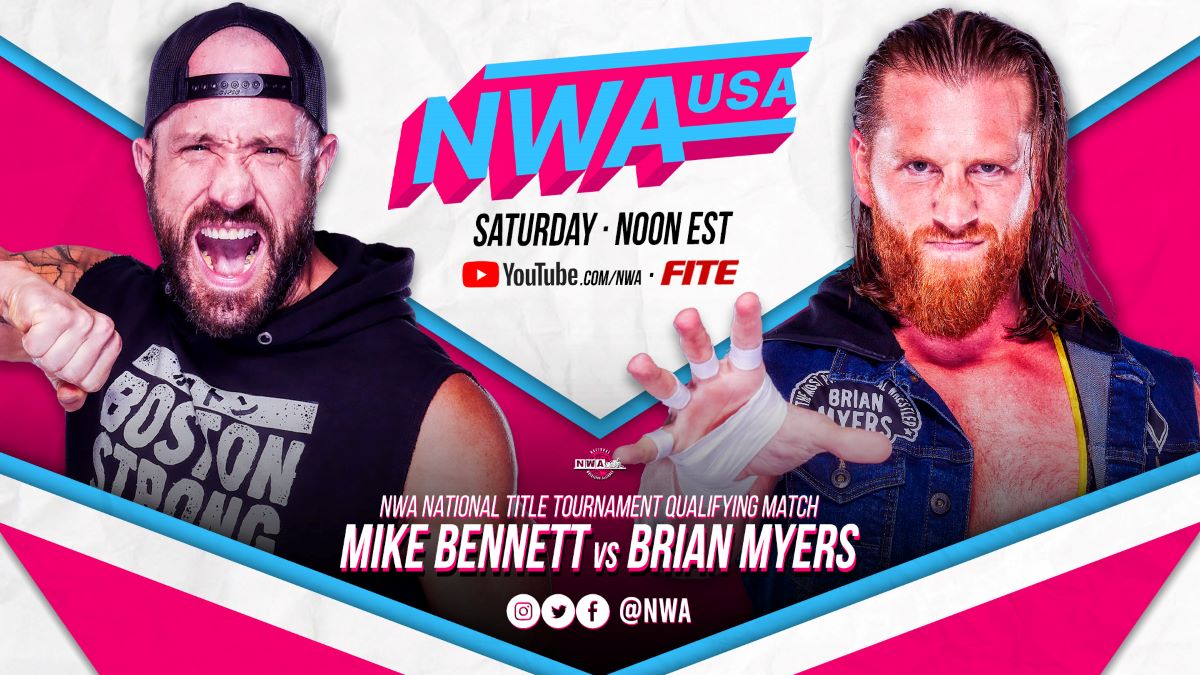 VSK is with Myers at ringside but gets ejected by the ref quickly.  Also, Bob Kapur’s Favorite Wrestler™ has Power Ranger-inspired gear, and there’s nothing like hearing fans chant, “Pow-er Rain-ger!  *Clap Clap*  Clap Clap Clap*.”

Bennett works his shoulder and stomps on the arm of Myers, but soon the Cardona Family member punches him and goes to work slowing pace.  Bennet kicks him in the midsection and signals the finish with a piledriver, but Myers rolls out right away.  He gives chase and as he climbs in the ring, Myers kicks the middle ropes as Bennett enters.  Myers is in full control and then gets a superkick for a two count.  Myers stays on offense, but Bennett fires back and gets him in a hammerlock submission with body scissors in the center of the ring.  Myers crawls to the ropes to break the hold, and Bennett kicks again to his midsection and nails a hammerlock DDT followed by a Death Valley Driver.  As VSK skulks back to the ring, Bennett attempts a spear but Myers reverses to a sunset flip to cover him for the one, two, and three!

Your Winner via Pinfall, and Advancing in the NWA National Tournament:  Brian Myers

Myers hightails it out of the ring, leaving Bennett incredulous about what just happened as the show goes to the credits.

I’m still puzzled that the title match was first, but I was pleasantly surprised by how Jackson kept pace with Homicide.  The qualifying matches were also suitable, but the Stanley’s Drill piece with Father James Mitchell?  Priceless, hence the extra quarter star.