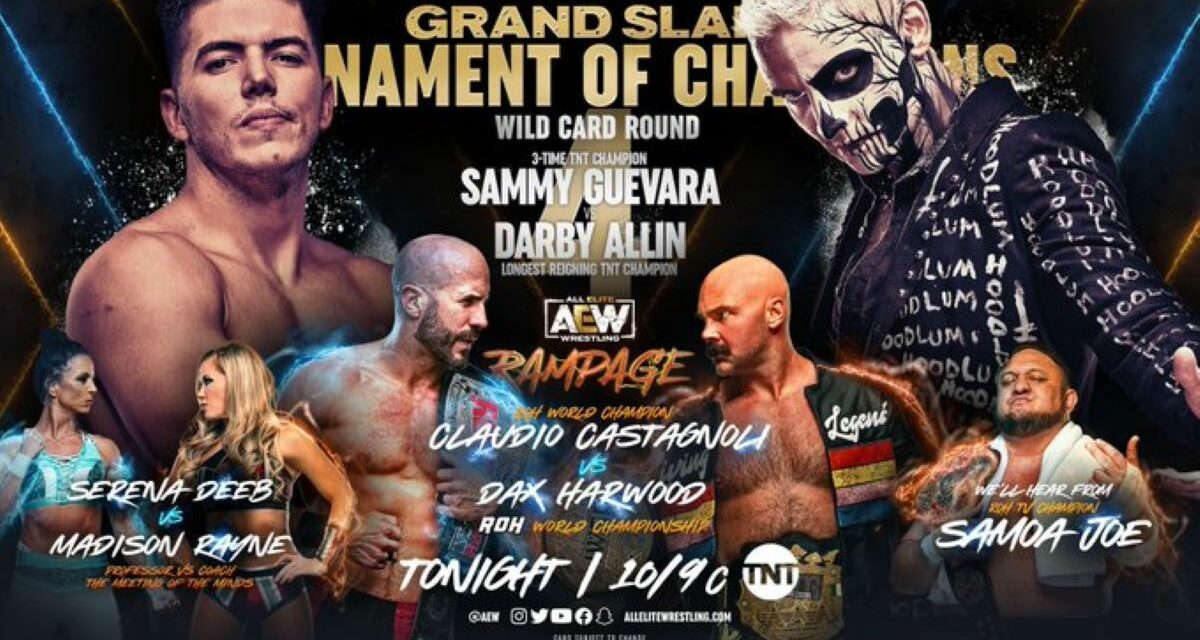 Obviously, this is a screwball time in the sport with lots of suspensions and vacated titles, but the show must go on. Even if you read the spoilers (gods you’re the worst), I still have a job to do, and some commentary/snark to offer.  Especially since there is a tournament to crown a new AEW champion and Dax Harwood wants to unseat the current Ring of Honor World Champion, Claudio Castagnoli, so let’s get to the ring.

Excalibur, Tony Schiavone, Chris Jericho, and Jim Ross have the call at the Key Bank Center in Buffalo, NY, and we go to the First Match of the night and it is for the… 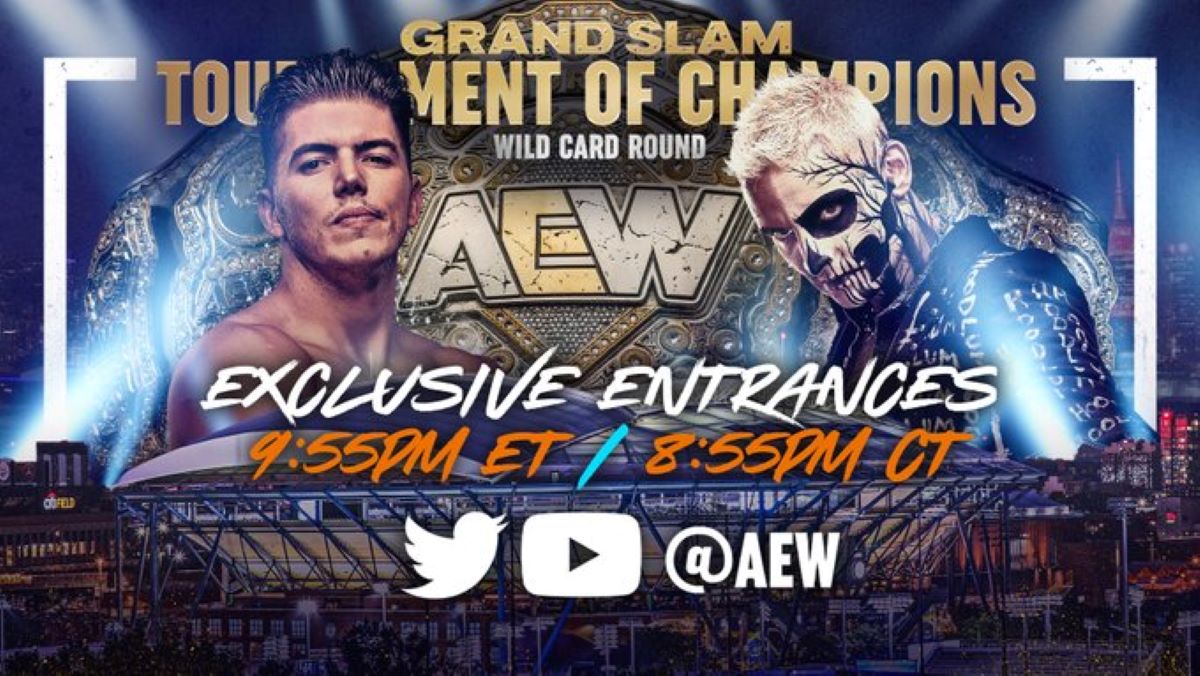 As both men start, Guevara shows disrespect to Allin by slapping him, but he returns the receipt to the Spanish God.  There’s a nice back and forth with Allin getting a modified Gory Special to Guevara and a coffin splash in the corner.  He goes for another splash that misses and Guevara takes control.  He gets a superplex to Allin and attempts the Three Amigos but then both men spill over the top rope and Allin gets the suplex to Guevara to the floor.  Allin tries a tope, but Melo blocks him. Allin Goes again and is caught with a cutter by Guevara mid-air.

Guevara preens in front of the AEW title and tries to cover during Picture in Picture, but just can’t put him away.  Guevara is in control, and he goes up top for a shooting star that misses the mark, and Allin counters with a Code Red for a two count.  They brawl out of the ring, and Guevara kicks Allin and gets smooches from Melo, but Allin gets another tope to tackle Guevara.  He sends him back into the ring to cover for another two count.  Now he takes off the wedding ring of Guevara, but he comes back and nails a double springboard cutter to Allin for a two count, all the while retrieving his wedding band.  Now Guevara musters the Power of Douchenozzlery™ and signals a coffin drop, but misses.  Allin attempts to show how it’s done but Anna Jay runs out and distracts the ref.  Melo has his skateboard and taunts him with it, as  Guevara lands a low blow.  He slams Allin onto the skateboard trucks up (ouch!) and delivers the GTH.

Your Winner and Advancing in the tournament:  Sammy Guevara

We get clips from The Devil MJF returning back after a long hiatus, and his tete-a-tete with Jon Moxley.

The devil is BACK. What is on 2022 Casino Ladder Match winner @the_MJF’s agenda after making his shocking appearance at #AEWAllOut?

Tune in NOW to #AEWRampage on TNT! pic.twitter.com/oVAAzwEFQW

Well, what in the name of Twisted Metal?  Samoa Joe comes out to the ring tells the Buffalo crowd that he owes them some more fights. He’s interrupted by “smart” Mark Sterling with Josh Woods and Tony Nese in tow. Sterling says his clients have been grinding and deserve a shot at a title.  Especially Woods, who’s hungry for the Television title Joe is holding. Joe agrees and offers Woods a shot at the belt, because he’s ready to fight tonight.  Before Woods can oblige him, Sterling defers to next week’s Rampage because he reasons it would be better to do this in a classier New York town, like Albany.

To be fair, at least it’s not White Plains, NY.

Are you there God? It’s me, Miro. You didn’t let him get a chance to fight the devil, so what about Miro? What indeed

(Author’s Armchair Booking:  Hi there!  Just a suggestion.  Call it “off the wall”, if you will, but…maybe have Miro become the head of the House of Black?  Like I said, just a thought.)

But let gets to the next match of the night…

The Professor of Pro Wrestling takes Rayne to school, but she is able to outclass Deeb (see what I did there?  huh?  Ok, I’ll stop.)  Both women then get to shoving and a clothesline by Deeb flattens Rayne, followed by a spinning neckbreaker for a two count.  Rayne fights back and hits a sliding lariat for a two count.  But it isn’t long before Deeb smashes her knee and cinches the Serenity Lock for the win.

Your Winner via Submission:  Serena Deeb

Ley Nair is with Jade Cargill and the Baddies. Can anyone stop her, asks Nair. Cargill’s all “Cut the s***!” (Huh.  She gets bleeped?  Looks like the new regime in Warner Bros. Discovery is locking that down).  In any case, Cargill and Kiera Hogan and … umm, other Baddie state she won for the 37th time, and no one can stop her. Period.

TBS Champion @Jade_Cargill (37-0) plans on racking up more numbers & throws a challenge out to any woman willing to step up and work – come apply!

Tune in NOW to #AEWRampage on TNT! pic.twitter.com/TE2miKreeW

Nair with Powerhouse Hobbs and his unexpected win on Ricky Starks at All Out. Hobbs is insulted by that and believes that since The Factory couldn’t get the job done, he took business into his hands and finished it with Starks. Now he wants to open the next chapter in the book of Hobbs and proclaim himself a Mon-Star.

After a powerful win against ex-friend & tag team partner @starkmanjones at #AEWAllOut, #Powerhouse @TrueWillieHobbs is ready to show the world the Book of Hobbs.

Tune in NOW to #AEWRampage on TNT! pic.twitter.com/XhOcZIOXzT

Mark Henry is backstage with Claudio Castagnoli plus William Regal and Dax Harwood. Regal starts by telling Harwood he was hired from obscurity.  Now he’s a good competitor, and even Castagnoli says he can win a singles title, but not tonight. He will remain the champ. Harwood knows he’s the underdog, but he’s going to fight for everything he’s got and he’s leaving with that title.  Top guy out!

It's TIME for the MAIN EVENT! The #ROH World Champion Claudio Castagnoli defends the title against #FTR’s Dax Harwood on #AEWRampage – Tune in NOW on TNT! pic.twitter.com/2F9nxaKLNk

Caprice Coleman joins at the commentary desk, and Bobby Cruise is here to announce the Main Event for the… 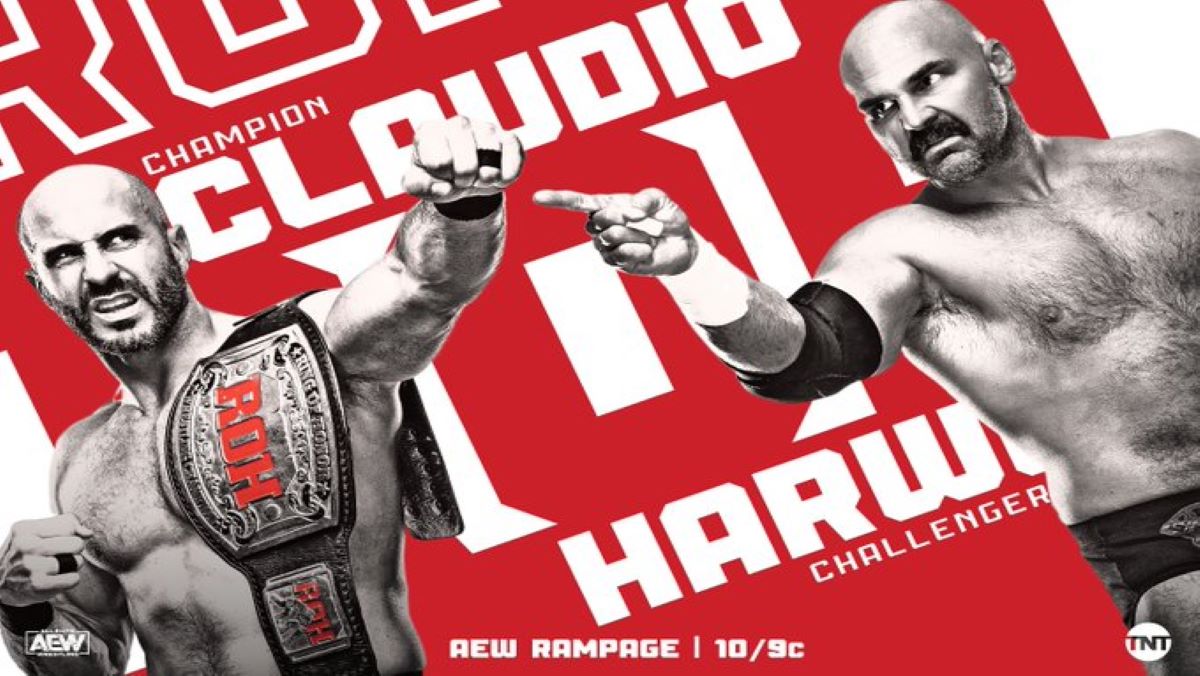 The Code of Honor is observed and the bell rings.  Both men tie up and then there’s a staredown as Castagnoli backs up Harwood to the corner. They go back and forth, but neither man gets the advantage.  Harwood nails with a short clothesline and attempts a suplex but Castagnoli reverses and they both tumble outside the ring to the floor.  During Picture in Picture Castagnoli and Harwood trade European uppercuts. Both exchange in one-upmanship and Castagnoli gets an armbar, and they chop in front of the through the Buffalo Bills at the front of ringside, and then…

Ads (What in the actual F*** is this, and during a good championship match?!)

Back to the ring and Castagnoli and Harwood are going to the lumber yard, but the champs sends him down hard.  He throws Harwood to the corner and his back hits the ring post.  As Harwood gets back up, Castagnoli gets a baseball slide that sends him to the guardrails.  Back in the ring, he gets Harwood in an abdominal stretch, wrenching his ribs and midsection.  Castagnoli lands a clothesline to cover for a two count.  He goes up top but Harwood gets up and chops away to send him down crashing to the mat.  Harwood channels his inner Harley Race and nails a diving head butt for a two count.  Castagnoli attempts the Neutralizer but Harwood reverses for a back slider. He tries to put him away but just can’t close the deal.  Harwood goes up top, but Castagnoli cuts off with his patented Europen uppercut and a superplex that gets just a two count.

During another Picture in Picture Harwood chops away at the ROH World champion and nails a brainbuster for a two count.  They battle outside and Castagnoli gets a monkey flip to Harwood to hit the ring post.  Back in the ring, Castagnoli covers but Harwood gets the bottom rope, and the champ stomps away at him.  Now the fans are on their feet and it’s a slugfest with both combatants firing live rounds. Harwood manages a backslider for a two count.  Castagnoli hits him with a boot but then Harwood reverses to a slingshot Ligerbomb for another two count.  Harwood follows with a string of German suplexes and he goes up top for a superplex but Castagnoli reverses for a cover of two, and Harwood reverses for another cover for two also.  Castagnoli goes into overdrive with a series of European uppercuts, followed by a Giant Swing, and then locks in the sharpshooter. Harwood crawls to the ropes and Castagnoli switches to a crossface, but he steps out of the hold.  Harwood reverses to his own sharpshooter, but Castagnoli rolls through and kicks him in the face.  He delivers Combat Club-style elbows to the side of his head and goes right back to the sharpshooter, and now Harwood taps out.

Controversy aside,  this was a solid show.  Also, at this point, can we agree that Rampage is Castagnoli?  He’s very good as ROH World Champion and very European.  Guevara and Allin did fantastic in the opener, too.  But Joe and Woods for the Television title next week?  Yes, please!