Buffalo crowd experiences the fall out from All Out 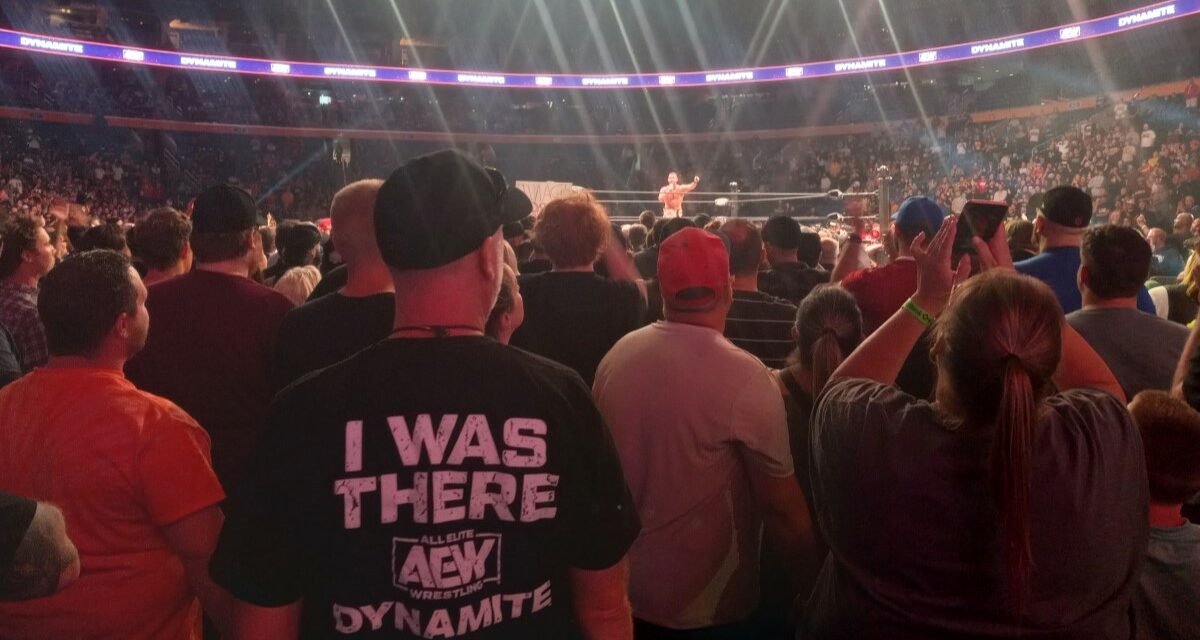 BUFFALO — The “Dynamite after All Out” might have gone in any number of directions. With the in-ring events of the 2022 edition of AEW’s spectacle being shoved aside in the news cycle to make room for coverage of new champion CM Punk using his post-event media scrum to sling mud at his co-workers, speculations about a backstage brawl between wrestlers, and the possibility of subsequent suspensions or even releases, there was plenty of anticipation in the air as fans in Buffalo, New York, filed in to the Key Bank Center to see where it all goes from here.

Nicholas, who crossed the border from Niagara Falls, Ontario, isn’t sure where things are headed for his favorite wrestler, CM Punk. “The situation sucks, but honestly, I’m a CM Punk guy and always support him,” he says. “Do I agree with how he handled it? Probably not, but at the same time I kind of loved it, because it makes things more exciting.”

Being what pro wrestling is and how it dances between fact and fiction, some fans like Tony and Eric, both from Buffalo, couldn’t even be sure that CM Punk wasn’t going to appear in the arena for tonight’s show. “I think there’s going to be a pipe bomb again,” Tony suggested. “But I don’t think he comes out tonight.” Eric went so far as to suggest that the intrigue surrounding this past weekend has put AEW on a troubled path. “They’re on a downfall right now compared to WWE.”

There’s one more superfan who chimes in with support of his guy, and it’s Jason from Buffalo who’s here for MJF. He acknowledges that the news coming away from All Out hasn’t been as much about MJF as he would like. “It definitely took a lot of wind out of his sails,” he suggests. “However, he has a lot of heat to work with tonight and he’s gonna kill it. And it’s going to be really interesting to see how they turn all this into some type of an angle. I do think we’re gonna see a new champion at the Grand Slam.”

Good call, Jason — though what else should we expect from someone who identifies himself as “JV 37”, three-time AEW All Elite General Manager champion? I literally have to take him at his word for this, not having ventured into this world of armchair GM gameplay myself.

I’m not sure if the TV broadcast included crowd noise during Tony Khan’s video introduction to the show, announcing the vacated titles and the plans to fill them, but it wasn’t great for him. Plenty of boos and chants of CM Punk greeted his appearance, and the announcing of the tournament was even booed. Who boos a tournament? Where are we, Philly?

The other hearty boos on this night were reserved for Swerve Strickland (who I remember getting a much more positive reception in Buffalo some years ago), MJF after he quickly turned heel on Buffalo (which was the crowd’s own fault for playing along), and, somewhat surprisingly, Adam Page. The crowd’s mixed treatment of the cowboy seemed to be yet another indication that backstage politics were as much on people’s minds as the action in the ring.

Ring announcer Justin Roberts had a good time throughout the night trying to pit sections of the arena against one another to see who could make the most noise, but by the end of the night section 117 had so thoroughly pulled away that every other section seemed to stop trying; 117 even started its own chant for itself, which provided a fascinating look into tribalism.

The biggest cheers for the wrestlers were given to, again, MJF when he pretending to give Buffalo the babyface treatment, Wardlow (with the seemingly un-ironic Goldberg-style chant), and local boy Daniel Garcia. The crowd seemed worn out by the time the taping for Rampage had concluded, almost as if a three-hour wrestling TV show is just too long.

The best sign award certainly goes to the interpretation of Michelangelo’s “The Creation of Adam” with a classy “Scissor Thee, Father Ass” re-imagining. Second place goes to the straightforward, somewhat apt “WCW 2.0” assessment.

After Dynamite had gone off the air and before the taping of Rampage began, Tony Khan appeared in the entrance area with no fanfare, and with yet more boos greeting him. Khan got right to the business of promoting the matches about to be taped, but still made no mention or allusion to the backstage events from this week. It was curious to see him come out in person for this part of the show, and not for the more significant opening statement.

After Rampage had completed taping, Khan emerged once again and joined Claudio Castagnoli and Dax Harwood in the ring to celebrate their match, received some more boos, and closed things out by thanking Buffalo, which the crowd couldn’t help but appreciate.

On the way out of the arena, I recognized Niagara, Ontario-based wrestler (among other ventures) Jeremy Elliott, who had taken in the show with his godson (and wrestler-in-training) William. He discussed how watching AEW with William became a fixture of the quarantine time at home, and though he himself had been out of wrestling for about four years, his son getting into the ring inspired his own comeback. “Pro wrestling has been amazing for (William),” Elliott offers. “I got back into pro wrestling just recently, in March, because it has done so much for him.”

Elliott has become heavily involved in raising awareness about Fetal Alcohol Spectrum Disorder (FASD), sharing how William ran into challenges in school due to FASD and that he sought ways to help ease his journey, and that of others. “Actually, this Friday the 9th is FASD day all over the world,” Elliott explains, detailing how he uses his wrestling and martial arts connections to bring attention to the issue. “We’re going to have martial arts seminars on the Friday, and then we’re going to have our Canadian Wrestling Federation Heavyweight Champion do a ‘Follow your dream’ speech. Next month, we have a huge event in the Meridian Centre in St. Catharines.”

You can follow Elliott here on Twitter to keep up to date on his events (and you can also visit Pro Wrestling Tees to see his campaign’s “Embrace our Journey” t-shirts for sale).

In the end, there wasn’t very much at all in either Dynamite or Rampage about the recent controversy, and instead the show simply rolled on. Apart from the sporadic “CM Punk” chants that sprang up now and then, and Garcia saying off the air that he and Wheeler Yuta wanted to represent all of the hard working young guys in the back, you wouldn’t notice much difference between tonight and any other week. While not quite feeling like a letdown, it was definitely noticeable in the waning enthusiasm from the crowd as the show went on.

One more fan’s take summed up all that AEW could ever really hope for from any of their shows. Barry from Buffalo bought tickets with his brother on a whim — and neither really came for the wrestling. “I got a phone call from my brother who’s a big fan of Westside Gunn,” he explains, referring to the Buffalo-born rapper who accompanied Daniel Garcia to the ring. “I’m 34 years old, never been to a wrestling show in my life. I always thought a lot of it was just kind of kind of silly, but you get thrown off the ropes over here, people are getting 300 pound guys slammed down on you. I mean, that is impressive. I think after coming to AEW, I might be back.”

That’s at least one fan who couldn’t care less about who badmouthed (or bit) whom on the weekend; he just had a good time.