SmackDown Live in Buffalo: A story of Buffalove and a father’s love

There were a couple of interesting stories for me to follow at The Keybank Centre in Buffalo as SmackDown Live rolled in to town — and I speak of neither the Saudi Arabian flight delay nor the NXT invasion. Instead, this was a night of feel-good stories, in that wacky way that pro wrestling can create honest-to-goodness emotional moments.

Firstly, I was attending with a friend who has been a nearly lifelong wrestling fan (since the birth of Hulkamania) yet has never been to a live WWF/WWE event. Secondly, seated beside us was the father of Isaiah “Swerve” Scott, who was booked on the 205 Live taping that came after SmackDown Live, but also, due to the NXT invasion angle, ended up in the ring during the final moments of the live broadcast.

I’ll get to those two tales, but first: the Buffalove.

Having been to quite a few shows in The Queen City over the years — from house shows, to Monday Night Raw, and a Pay-Per-View show – there has always been one common element: Buffalo gets razzed. In some respects, it’s an easy target, and the WWE has never shied away from trotting out wrestlers to take shots at the Bills, the Sabres, the weather, the wings … it’s the cheap pop in reverse. 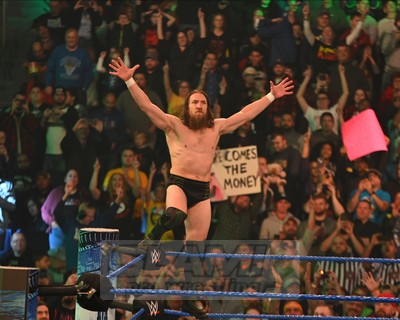 On this night, though, there was nothing of the sort. The arena was full, it was lively, and it seemed appreciated. There wasn’t even a little jab by Triple H when Bryan suggested a match between them — in the past, this might have been laughed off as a waste of a main event on a Buffalo crowd.

This could have been an anomaly, and by the time SmackDown returns in March, The Miz might have turned heel and will be sporting a “Buffalo is Awesome … at Losing” shirt. I wonder, though, if the Fox production team has any influence over the playful targeting of Buffalo or other cities. 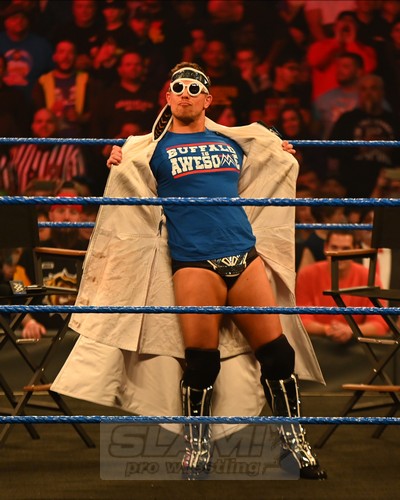 The Miz sporting his Buffalo shirt. Photo by Joe Hrycych

My friend in attendance has, in fact, seen live wrestling before: he remembers being about 9 or 10 years old and seeing a show in Thorold, Ontario, featuring nobody of any significance that he can remember in a community hockey arena or some such venue. It made an impact on him, and it wasn’t long afterwards that Hulk Hogan started bringing kids of his age into the world of the WWF.

He has watched every WrestleMania and follows the rest of the programming at least by way of highlights and news (from Slam Wrestling, of course), but has never bit the bullet to come to a live show. When pressed as to why, he couldn’t come up with a solid answer; it was just one of those things that never lined up for him.

So, it was with a sense of anticipation and curiosity that he entered the arena. One of the first things he had always wanted to confirm was whether there would be someone handing out signs for people in the crowd. At first we thought we saw some evidence in the double-sided “Legit Boss” and “Screw all of you” signs that were popping up everywhere. However, we then saw security doing their best to round up all of the signs before the show started. Apparently, those were snuck in.

When we asked why they were being taken away, the answer was that they didn’t want “Screw all of you” to show up on TV. Well, maybe don’t have Bayley say it, then. 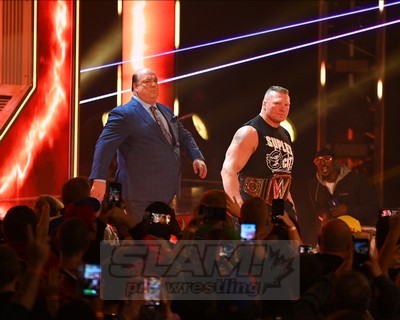 Brock Lesnar and Paul Heyman head to the ring. Photo by Joe Hrycych

Next up on his list of curiosities is what will the wrestlers themselves look like in person. It turns out that, at least in Brock Lesnar’s case, it was a bit underwhelming. “I thought he’d look bigger” is his nonchalant appraisal of The Beast Incarnate. Paul Heyman does a significantly better selling job as his advocate.

He also came in with totally fresh eyes and thought that the WWE would do more to create some fan interaction pieces, like more varied merchandise availability, and maybe a scheduled autograph signing. I told him about the autograph sessions at SummerSlam and their pricing tiers; we agree that it can be awfully hard and costly to get a son or daughter some time with their favourite wrestler.

As the show ended, he managed to get up close to slap his hand on the ringside barrier a couple of times, to have a tactile companion to what he’s seen on TV for all of these years. He did so with a big grin on his face, and politely declined my offer to run his head into it a couple of times for the full experience.

At the end, he walked away with perhaps the only sentiment that matters in the business of entertainment: “I would come back,” he said, summarizing a happy customer’s evening.

His happiness, though, paled in comparison to Isaiah Scott’s father, here in attendance to watch his son wrestle live for only the second time. The first time was at a fair in the Buffalo area, and now it was in an arena with, it turns out, national television exposure.

He told me how seeing his son wrestle for the first time was an awesome experience that he’ll never forget, but that, more importantly, how pleased he is to hear from Scott that he is loving what he is doing right now. 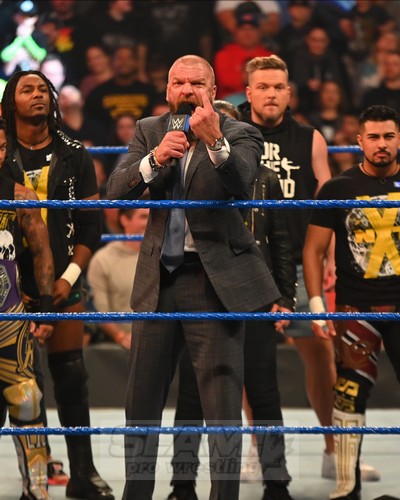 Isaiah Scott can be seen to the left of Triple H at SmackDown’s finale. Photo by Joe Hrycych

Having worked his way through independent organizations, with a run through Lucha Underground as Killshot, and wrestling in Evolve in partnership with NXT wrestlers before taking part of in the NXT Breakout Tournament, Scott is making the most of an opportune time. His father, meanwhile, maintains that the thing he’s happiest with is how his son remains humble and appreciative of what he has before him.

During the Fire & Desire tussle with Ripley and Nox, Scott started sending text messages to his father. Hearing him narrate the confusing conversation about trying to locate where he was sitting, it sounded like Scott wanted to know where to find him when he came out to the ring. Instead, once the text messaging was sorted out, someone came to pick up Scott’s father and friend and bring them backstage, not long before “Swerve” made his SmackDown Live debut. 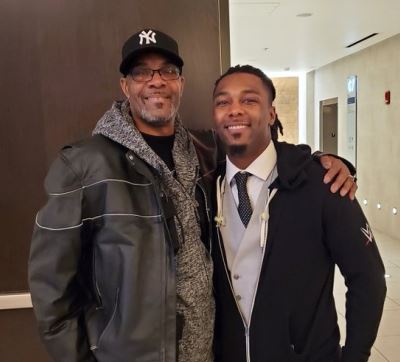 A Twitter photo from Isaiah Scott with his dad, @swerveconfident

I didn’t get to see him again, but I can only hope that Scott’s father had a wonderful time seeing his son in his element. I was a little disappointed, which I said to my friend, that it wasn’t an elaborate set-up for a run-in during Scott’s match with Daivari, but maybe next time.

Now, for some short musings about the rest of the night:

In the lead up to going live, the crowd is treated to the same videos that were shown before SmackDown in Toronto back in August. Later on, a commercial for the premiere of Kevin Owens 365 (featuring Chris Jericho, even). Time for some new material.

Fans around me were happy to see Tamina, but I think they ended up more impressed with her opponent Divya Ch.
As the Lesnar/Velasquez match is replayed for the fans and those at home, Paul Heyman kept a close eye on his watch and gave instructions to a ringside worker. He seemed to be speaking with long, drawn-out phrasing tonight; “Fill that time, Paul”, as shouted by the guy behind me, seemed about right.

As The Miz and Tommaso Ciampa wait through the commercial break before starting their match, The Miz spent his time high-fiving and gesturing to the crowd. The wish to remain on their good side after such a big pop for Ciampa was on display.

There was quite a bit of chatter about AEW, with consensus of the fans right around me that while it’s off to a good start, there’s simply no competing with the WWE’s resources in a long-term battle. There was also plenty of talk about the terrible start for the 2K20 video game, with shared horror stories of botches and glitches. 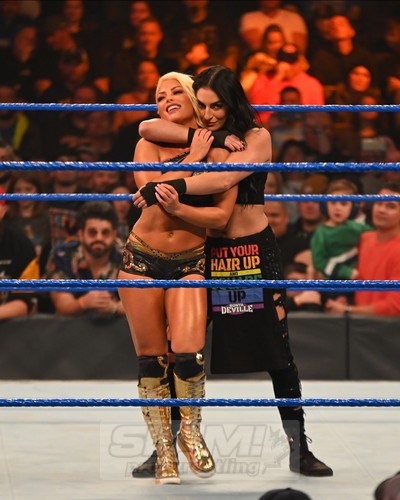 Who wants to wrestle Fire & Desire? Photo by Joe Hrycych

Finally, as Fire & Desire appeared to be without an opponent, another guy behind me yelled out “I’ll wrestle you Mandy”. It felt like Jerry Lawler of old was on commentary right there with us.

SmackDown Live returns to The Keybank Centre in Buffalo on March 6, 2020.