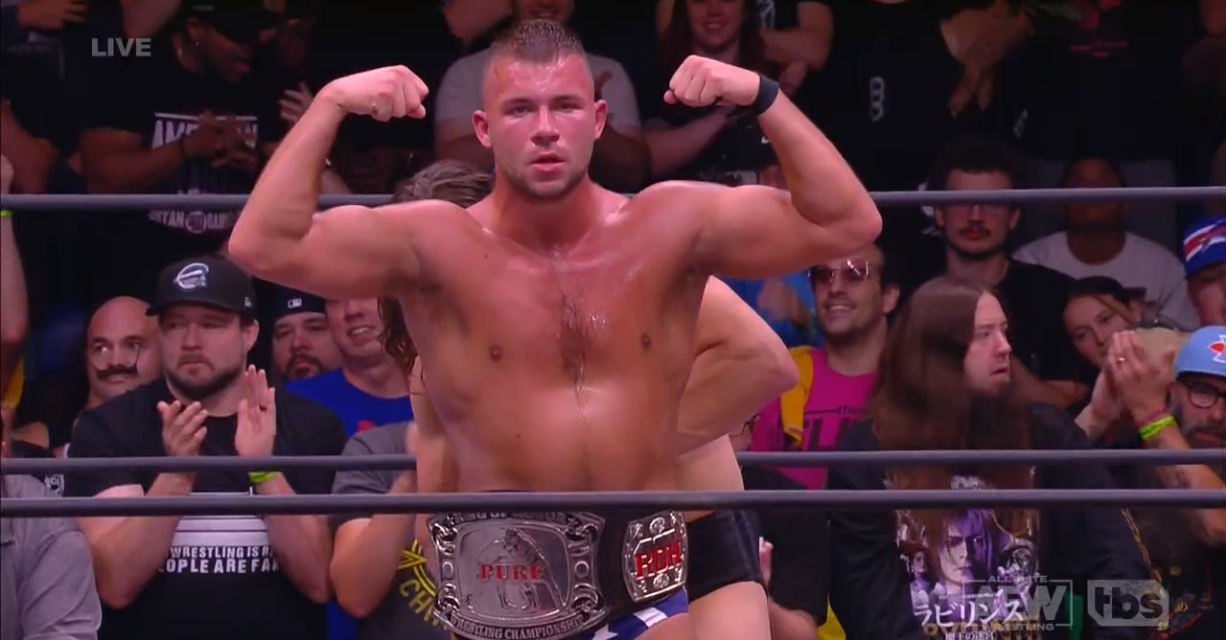 MJF returned to AEW at All Out on Sunday and nobody is talking about it heading into tonight’s Dynamite. That’s what happens when the newly crowd champion runs down his colleagues during the media scrum and then daring them to do something about it. And those parties take him up on the challenge. I wish I could say this was all scripted, but here we are. Let’s get to the show, because Tony Khan has some explaining to do.

All the announce team talks about is the return of MJF, but then throw it to Tony Khan. He announces that the AEW World title has been vacated along with the new Trios Tag Team titles. The new Trios champs will be crowned tonight, while there will be a tournament for the AEW World title. That also starts tonight with the winner being crowned at Grand Slam. But, TK, why were those belts vacated?

MJF makes his way to the ring, wearing a Josh Allen jersey as they are in Buffalo. I don’t think the cheap pop was necessary. Seriously, Max, they love you, you don’t need talk about Josh Allen. MJF knows he said some offensive things, but he was kidding; despite the crowd chanting he was right. MJF tells them he will never leave and he didn’t mean to call the fans stupid marks. He has to address the elephant in the room; MJF knows he deserves that championship. He won’t enter the tournament because he has a chip that guarantees him a title shot anytime he wants. Plus, he got paid a boatload of money. MJF assures us that AEW is not in dark times as he will be the one to lead us to the promise land. “I’m not comparing myself to Moses; I’m better than Moses.”

Well, Jon Moxley, the former AEW World Champion, has something on his mind. He tells MJF that he is full of crap. MJF immediately turns on the Buffalo crowd, wiping his rear end with the Josh Allen jersey. MJF goes into full heel mode, revealing that to him the AEW title is bargaining chip. Maybe he will take that belt and join his hero, Cody Rhodes. He will work for the only Khan that matters, Nick. That’s what is best for business.

Moxley is in no mood; telling MJF he has to leave or else. The two stare each other down. MJF ducks out of the ring, storming to the back. Mox is angry and embarrassed, most of all he doesn’t have the AEW championship. What that belt represents is what matters to him. It represent a passion for the company and business. The game is on the line and Mox wants the ball.

Alex Abrahantes prevents Danhausen from putting the curse on Pac. He keeps Danhausen occupied long enough for Pac to kick him in the face. Orange Cassidy nearly gets the pin after spiking Pac on his head. Pac counters the Orange Punch with kick. Cassidy is able to hit Stundog Millionaire and get the tag to Chuck. Penta catches him with a back stabber. The Lucha Brothers double team Chuck, who is still able to kick out of the pin. Fenix eats a superkick and takes a DDT. Trent gets caught with a cutter. Orange hits Pac with a German suplex. Fenix with the Code Red on Trent, but still can’t get the pin. Pac saves the match, breaking up the pin on Penta. The Best Friends run into superkicks and Death Triangle hit Canadian Destroyers on all three men. Penta takes out Trent and Orange on the floor. Pac hits the Black Arrow on Chuck and covers for the three count.

Tony Schiavone is with the Dark Order. Jose wants 10 to sign a contract to work with Andrade. Jon Silver shoves Jose and is looking for a fight. Andrade walks away.

Jamie Hayter is not happy with Britt Baker after All Out.

We think that’s Kip Sabian; he’s got the box over his head. Ford suckers Toni in with hand shake and kicks her in the gut. Toni misses a hip attack in the corner, but is able to drop kick Ford through the ropes. Ford whips Storm into the ring steps. Back in the ring, Ford nearly gets the pin. Storm dodges a charge in the corner and Penelope catches the ring post. Storm with an uppercut in the corner and follows with the hip attack. Toni counters a northern lights suplex with a DDT. She covers Ford and gets the win.

The Acclaimed head to the ring, but get interrupted by Swerve Strickland. The Buffalo crowd is not having it. Long story short, the Acclaimed now have a rematch for the AEW Tag Team title at Grand Slam II.

Tony Schiavone is in the back with Chris Jericho, Anna JAS, Sammy Guevara and Tay Melo. Jericho declares the lockerroom is his after his win over Bryan Danielson on Sunday. He is going to win the tournament for the AEW Championship. Jericho tells Daniel Garcia that he believes in him but he will have to beat Wheeler Yuta alone.

The champ isn’t impressed with Tony’s physique, delivering a head butt. A lariat takes Neese down. Wardlow ends the match with the Powerbomb Symphony and covers to get the win.

Mark Sterling leaps to the apron and Wardlow brings him in the had way. He wants a powerbomb but Josh Woods is able to save him. Wardlow reminds everyone that this is Wardlow’s world.

It’s nice that AEW shows us what happens during commercial breaks during the match. Bryan took Page to the floor and hitting several running knees against the barrier.

Back in the ring, a fall away slam from Page sends Danielson back to the floor. Page hits him with a plancha and rolls him back into the ring. Page counters a clothesline into a Death Valley Driver. Danielson escapes the Dead Eye and sends Page into the turnbuckle with a drop toe hold. Bryan hits several running boots as Chris Jericho watches from the back. Bryan with the kicks, collapsing Page to the mat. Danielson gets caught on the top turnbuckle and the two trade punches. Page with another fall away slam, but only gets a two count. Page wants the Buckshot, but Bryan rolls out of  the ring.

After another commercial break, the two man trade chops in the middle of the ring. Page hits a sit out powerbomb, but on gets a two count on the pin. Page gets hung in the tree of woe and Danielson drop kicks him in the face. Bryan rains down elbows on the top turnbuckle and wants the back suplex. Page lands on his feet and nails Danielson with a lariat. Bryan rolls into Page after an elbow and locks in the Lebell lock. Page is able to escape and sends Danielson across the ring. Bryan applies the Lebell lock again. Page breaks free. Danielson shrugs off a lariat. The two trade rolling elbows. Page hits the Dead Eye, but still can’t get the pin. Page misses a moonsault and Bryan hits the Psycho knee. Page rolls to the floor. He catches Danielson on a suicide dive, power bombs him into the apron and follows the Buckshot Lariat. Danielson counters, sends Page into the ropes and is able to roll him up. Danielson gets the three count.

Jungle Jack Perry has some harsh words for Christian Cage and Luchasaurus.

Stokely Hathaway and his crew are on the stage. He knows people want an explanation for what he did in the ladder match at All Out. A stage hand tells him to wrap it up. Hathaway will have none of that, hitting the guy. W Morrisey hits him with a big boot to the face.

Garcia may not have the JAS in his corner, but Westside Gunn does rap during his entrance. The rules are a little different; there are three judges at ringside, each wrestler on gets three rope breaks, punching is illegal and the belt can change hands on a DQ.

The two lock up. A shoulder blocks sends Yuta to the mat. The two spill to the floor, but immediately return to the ring. Wheeler ducks and kick and hits an enzuigiri. Yuta follows with a flying elbow. The two exchange chops. Yuta with a snap suplex and kicks Garcia in the chest. Garcia slaps Yuta and delivers a back suplex. He hits another and takes Yuta down with running lariat. Wheeler hits three rolling German suplexes. Garcia reverses the hold and delivers three German suplexes of his own. Yuta swaps position and goes back to the Germans. Garcia with the switch and two more suplexes. Garcia catches Wheeler on the middle rope, hitting a German suplex.

After the last commercial break, both men are down in the ring. The slap each other from their knees. A big slap sends Yuta to the mat. Wheeler gets to his feet on an eight count. Garcia with a double leg take down into the Dragon Tamer. Yuta gets to the ropes to use one of his three breaks. Garcia with a trip and locks in the Dragon Tamer again. Yuta counters into a cross face and transition into the seatbelt pin. Garcia kicks out and locks in the Dragon Tamer again. He leans all the back. Yuta tries to apply a neck crank, but is then forced to tap out.

After the match. Bryan Danielson enters the ring. Yuta tells him to stand down and shakes Garcia’s hand. Danielson takes the belt and puts it around Garcia’s waist. Chris Jericho walks out on stage and can’t believe what he sees. Danielson raising Garcia’s hand. See you in seven.

Buffalo crowd experiences the fall out from All Out

When faced with adversity AEW goes back to what it does best: Wrestling. The Trios championship match was fire. Bryan Danielson and Hangman Adam Page left it all in the ring, while Daniel Garcia and Wheeler Yuta put on a wrestling clinic. MJF returned and did MJF things on the microphone; while Jon Moxley poured his heart out for the business.