SmackDown: Roman Reigns commemorates his rule with a twist 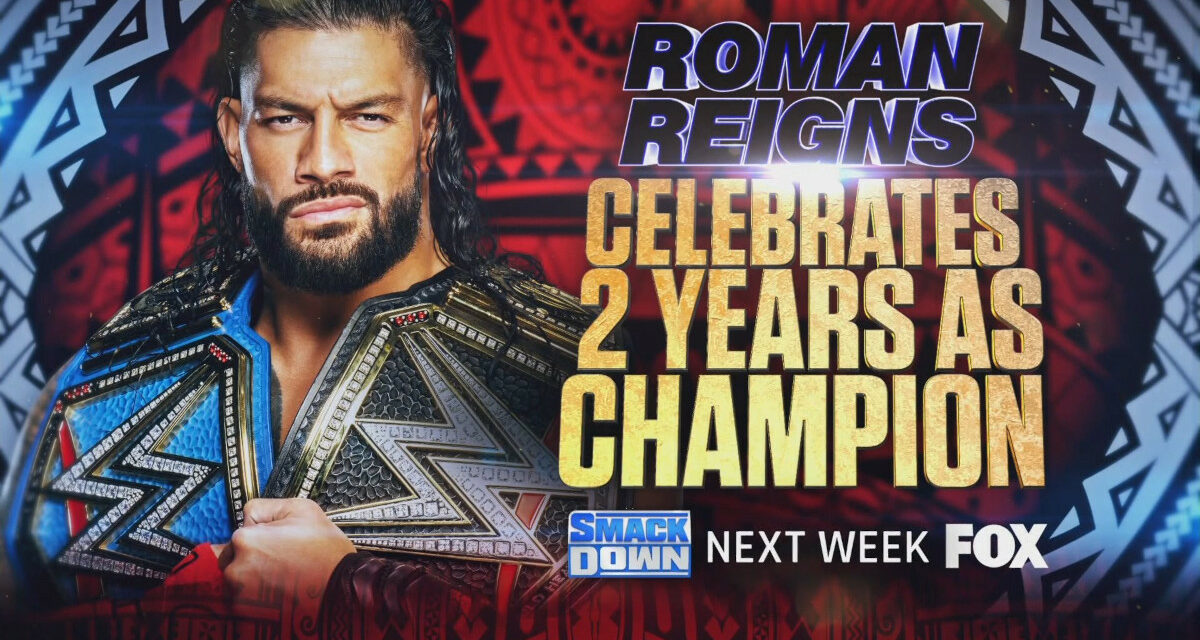 The Bloodline celebrates Roman Reigns’ two year run as Undisputed WWE Universal Champion on the eve of Clash of the Castle. Not too many people can say they’ve reached that point like Reigns has. It either made him humble or cocky. Which do you think Roman chose to do?

And speaking of The Clash, we don’t need to wait for too long because that’s taking place tomorrow afternoon. We’re leaving the impactful and pleasant winds of SummerSlam and entering a battle of the medieval ages, the greatest main events that’s ever landed in the most irritating month, September. That will be a nice kick in the ass because I get a cushion afterwards.

The ring was decorated with a wooden dragon at the front and shields were set on the sides on the ropes. I actually liked how authentic it was.

When you fight Vikings, I suppose you’ll dress as one. Kofi Kingston came out dressed like Thor, but I’m not sure about Xavier Woods, he looked like a glorified unicorn without the Party City mask or Loki.

New Day are the ones in control, ruling in this no rules match against the Vikings. Woods and Kingston fly off in unison and land on the Raiders outside the ring. New Day go as far as to place a shield on Erik to allow Xavier to deliver a running kick to Erik’s face against the barricades.

The Vikings haven’t even gotten the chance to get momentum in this match so Kofi gets some revenge by jumping off the barrier and landing on top of Ivar.

The match was taken to the crowd as Kofi is thrown onto the harsh floor and Ivar squishes Woods with a running cross body.

What came off as odd was a scene coming out of Roots when Kofi was held by the Vikings, Erik had a kendo stick in hand then began to whip Kingston’s back with it as his hands are locked down by Ivar leaving Kofi on his knees. That was too much…

As retaliation, Kofi uses a unicorn sledgehammer hidden under the ring to hit Erik with on the head as he jumps off the top ropes.

On the other hand, Ivar is dropped onto Kofi’s midsection on the dragon boat just like he did a couple of weeks ago when he used the barrier.

A double team effort by New Day to plant Erik head first against a steel chair for a cover that’s quickly interrupted by Ivar’s jump splash was both epic and annoying.

The Vikings drive Woods through double set tables for the win as they put away New Day, at least for today. That’s unfortunate because Woods and Kingston were so close to winning, but alas, I have to wait and so do you. This was a long match, yet an amazing one at that.

Backstage, Sami Zayn is dressed up for Roman Reigns’ celebration later tonight once the Tribal Chief arrives. The Usos, Jimmy specifically, complements Zayn on his suit that he thought was wearing Tribal colours, but Jey disagreed. I think he’s bitter due to his loss against Kevin Owens on Raw earlier this week. Saying Zayn didn’t help him.

Shayna Baszler reminds Liv Morgan that she will be WWE SmackDown Women’s champion by the end of their match tomorrow, yet as usual, Liv is here to drill the fact that she will be ripping Baszler’s arm off as a second reward to her title belt.

Karrion Kross makes his in-ring debut tonight along with Scarlett, his dark angel, casting his shadow and mist onto the grand stage. Tick tick tock…

Girl, Gulak is back? I didn’t think this was going to happen. Nice. Nice. I think…

Anyway, Gulak has some edge in his step during this match, but Kross welcomes torment just like JD McDonagh from NXT 2.0.

Gulak tried to put up a fight, but Kross enjoyed placing a boot to his face and mangling Drew apart like uncooked dough.

Gulak taps out after a few minutes in, which felt more like seconds, allowing Kross the win. Wow. That was sad for Drew Gulak. Very, very, disappointing, but at the same time, did I really think he’d win? No. That was an illusion I didn’t concoct.

Ronda Rousey’s final judgment is nigh as she makes her way to the ring. She looks great and angry, can’t say I’m not happy to see her.

Ronda received a letter by the board of directors that reads that her suspension has been lifted and her fine has been paid. She decides to have Adam Pearce read it.

Pearce’s opinion isn’t upstaged by Rousey’s recognition in the industry, so yeah, she was definitely coming back. But, Pearce has a problem with Ronda, not the board. He goes as far as to say that Ronda is the “Single biggest b*tch I’ve ever met,” during his rant about working with high maintenance, ungrateful people like Ronda.

That pissed Rousey off, and rightfully so, she approaches Adam, who immediately regrets it while trying to take it back and apologize. Ronda has Adam in an arm bar then looks over the audience for a rally cry, I encouraged her to break his arm, and she did. Or rather almost. She lets Pearce go and walks out proud. So am I.

I felt like I got whiplashed by this match because I didn’t understand why these models would even bother fighting knowing it could damage their perfectly symmetrical faces. Oh well. That’s on them.

During the beginning of this matchup, Mansoor and Ashante are the first to start. Ashante manages to flip his opponent, yet he uses a quick spin as a means to pose. Because of that, the models exit the ring completely baffled with their chins being out of place or their snatched eye lashes. Ma.cé tried to do something too, but he rapidly got his ass kicked out.

Los Lotharios show up for some reason, but I’m surprisingly not complaining. They distract Hit Row with a few words. B-Fab doesn’t like the look of it, so she kicks both cousins as they tumble backwards.

After the theatrics are over, Top Dolla is tagged in against Mansoor, who is looking pretty scared. Love it. Mansoor throws a right and gets blocked leaving Dolla to deliver one of his own.

Ashante also enters the ring, so he and Dolla can issue a Heavy Hitter for the win. This was a good reason to toast to, yet Los Lotharios decides to attack Hit Row with the help of the Male Models. It’s now a four-on-two brawl until… The Street Profits swoop in for the rescue. I sense a 8-man tag team match. Ooh. Oooh.

Corbin doesn’t want to talk about his losing streak no matter how embarrassing it could be for him, so he issues an open challenge and guess who accepts his invitation?

Shinsuke Nakamura! Corbin looked irritated, which made me laugh off my seat. Apparently, Nakamura is the master behind Corbin’s damnation. Which makes this match all the more sweeter.

The bell is rang and the brawl begins. Nakamura may have been driven into the turnbuckles but he spins it by using those kicks and punches of his. Corbin just isn’t concentrating enough on his match, hence his losing streak.

Nakamura lands a few kicks to Corbin’s head before setting himself up for the Kinshasa, which gets swiftly changed into Happy’s 8-6 move instead.

Happy goes for his End of Days maneuver, Shinsuke slips through, then Kinshasa’s to Corbin’s face for the win. Michael Cole thought that if Happy loses this match, it’s really become rock bottom. That was a magnificent spoiler, no?

Butch comes out in a one piece wrestling outfit that almost reminded me of Big Show or Rayback along with his hair down. His former Bruiserweight persona. Ha! Ha! Ha! Ha! I couldn’t hold my snickering for too long. It was too much strange, the kind that’s questionable.

As we move on from my clearly bizarre opinion, the match has commenced. Butch takes the fight to Ludwig while attempting to put him away earlier with a disjoint maneuver.

Butch uses Ludwig’s fingers as bendable straws to crack, putting Kaiser in dire pain. The rabid animal goes further as he arranges Kaiser’s arm, so he could stomp onto his tricep. You could here a crunching sound at the collision. It was horrible and cruel. My goodness.

Ludwig does manage to deliver a suplex to Butch before getting a hard right hand to his face after attempting to jump off the ropes. Ha! Oof.

When he has “never ending energy,” Butch makes sure to utilize it by kneeing Kaiser in his already injured left arm. And don’t forget Kaiser’s hand too. Ludwig wailed in agony as if he was pleading to the Gods. It was hilarious.

What was even more amusing is when Kaiser thought he had Butch in a winning hold, but Butch turns it around by breaking his opponent’s fingers again. And you should have seen Kaiser’s face once he realized he was caught midway. He looked like someone violently grabbed his dick.

Butch performs his Bitter End move for a win over the Ring General’s… sidekick.

We have reached the part of the night to celebrate Roman Reigns’ reign as the Undisputed Champion. The Usos and Sami Zayn strut their way towards the a photo decorated ring of Roman’s most memorable title matches.

There was this constant back and forth between Jey and Zayn as to who should be running the introduction. Jey hasn’t changed his mind about thinking that Sami is getting too comfortable around The Bloodline, especially without any gold around his waist. So Jey interrupts Sami speaking and takes over.

Roman Reigns is seen arriving backstage by car, unfortunately, Drew McIntyre delivers a boot to his face as Reigns bumps his head against his vehicle before collapsing on the floor.

McIntyre stomps towards the ring, allowing the twins to push Sami as a shield who quickly gets knocked off his feet with a headbutt. Drew then goes for the Usos and beats them up as well, he also sends Jey into the barricades.

What about the celebrations? It doesn’t matter anymore even though I stood from my seat and put my We the Ones finger up for nothing. I was pumped, damn it…

Hope you’re ready for tomorrow as I am.