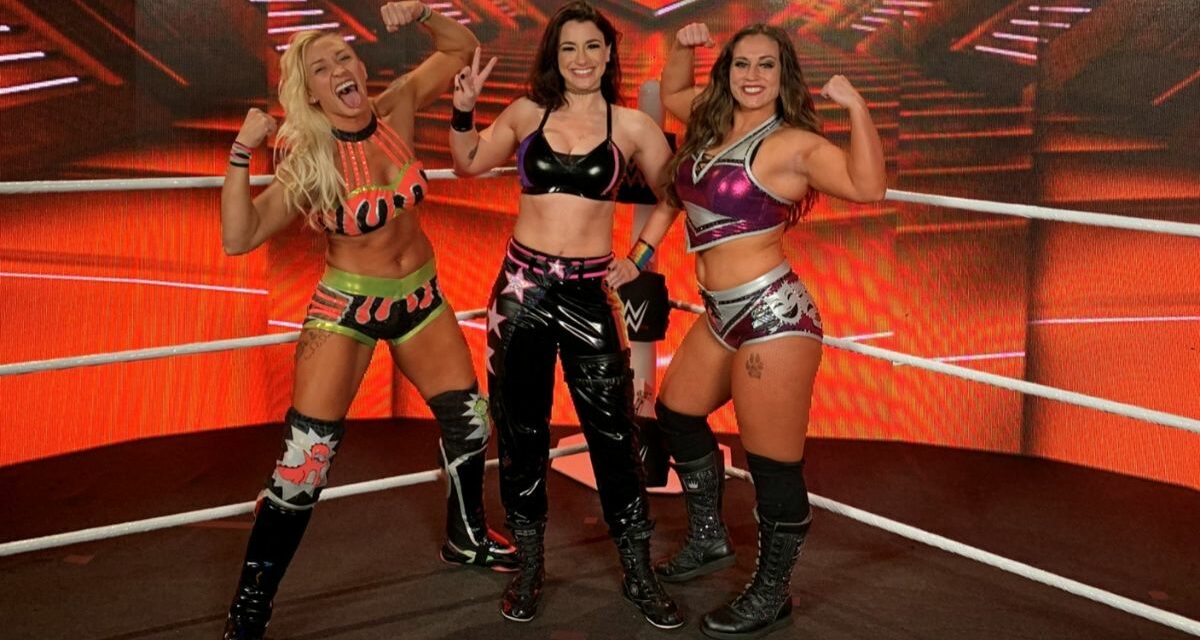 PITTSBURGH — It wasn’t terribly out of the ordinary to see Alexa Bliss, Asuka, and WWE RAW Women’s Champion Bianca Belair walk to the ring for a tag team match. In fact, they are usually matched up against a trio of other contracted talent—namely someone like the serviceable Dana Brooke—but ever so rarely, local enhancement talent is used.

In Pittsburgh during the early-to-mid-’80s, independent journeyman Ken Jugan was a prime example from the men’s side of the roster. He’d be pummeled by the likes of The Iron Sheik (in a TV defense for the WWE Championship no less), Sgt. Slaughter, Tito Santana and others. In fact, he did the work so well that he remains friends with many of those marquee names to this day.

The WWF’s women’s division wasn’t showcased then like it is now. Pittsburgh’s Donna Christianello and later her real-life niece Angie Minelli, were among those from all over who are the underappreciated trail blazers.

On Monday, August 29, Bliss, Asuka and Belair were matched up against two Pittsburgh-area talents and another from nearby New York. It was a true “Girl Power” moment for Katie Arquette, Dani Mo and Kayla Sparks. It’s interesting to note that Arquette pulled a “Rick Rude” by wrestling Serena Deeb in a YouTube AEW Dark Elevation match taped last week in Cleveland and grappled live in her hometown the very same evening. (Florida’s Cameron Stewart was the first to perform for both NXT and AEW on the same day nearly a year ago.)

Dubbed “Katie Ark,” one of the announcers muttered a joke about her being related to “Noah.” In fact, Arquette is “The Queen of the Silver Screen” and worked “cousin” of former WCW World champion and actor David. David Arquette has played along with the rouse, even showing up for the International Wrestling Cartel (IWC) in Western Pennsylvania. She’s used a picture of him raising her hand in victory on social media. In addition to that, she was the gal who defeated IWC’s Women’s Champion Britt Baker when the dentist from Punxsutawney, Pennsylvania, was signed to AEW. Arquette has since lost that belt, but works throughout the tristate area.

Dani Mo’s story is even more meteoritic. For several years, she was a valet and “second” to long-time boyfriend, “The Neon Ninja” Façade. Always athletic and a Sports Management graduate who pole vaulted, Dani first needed to take care of a mouth full of broken teeth caused by an accident. Forced to get the work done over several years, Dani had crowd-funding campaigns to help pay for the surgeries. Once that work was complete in 2019, she trained and served as a mixed tag team partner with Façade. She even infamously turned on him at one central Pennsylvania show, only to return to his side about two months later. She has worked all over since then, and also wrestled on AEW against Tay Conti last October. On RAW, she was called Dani Mo, thus being the only one of the three whose ring names weren’t tampered with by Byron Saxton, Jimmy Smith, or Pittsburgh’s own Corey Graves. Oh, and if you noticed, she did insert a mouth guard before taking to action.

Kayla Sparks isn’t as well-known in Steel City circles. Called “Kay” Sparks by the broadcasting crew, she was the one served into the sky by Belair toward the end of the match. Based in New York and Immortal Championship Wrestling’s Women’s Champ, “The Spice Ranger” was recently teamed with Dirty Dango (f.k.a. Fandango) at a convention signing. She’s been on Busted Open Radio with David LaGreca and Thunder Rosa. It’s been noted that Sparks also pulled a version of the “Rick Rude Moment” last February when she was on Smackdown as part of a Los Lothario’s “Kiss Cam” and a taped AEW Rampage on TNT, where she couldn’t fulfill Serena Deeb’s “Five Minute Challenge.” She’s scheduled to wrangle with Serena Deeb in the Empire State on September 17.

Last night was absolutely SURREAL! 💖 Thank you so much to everyone at @WWE for the amazing opportunity! 🙏 It was an honor and privilege to be featured on #WWERaw with the BEST talent in the world! 💪 My childhood dreams came true and still can't believe this is real!! 😍✨️🌈 pic.twitter.com/M7E1ePBVG3

For their part, AEW has also done an extraordinary job of day-gigging local independent women throughout the country, and WWE has started to do more of the same.

Within a day of the match, all three women shared photos and congratulatory #GirlPower notes throughout social media.