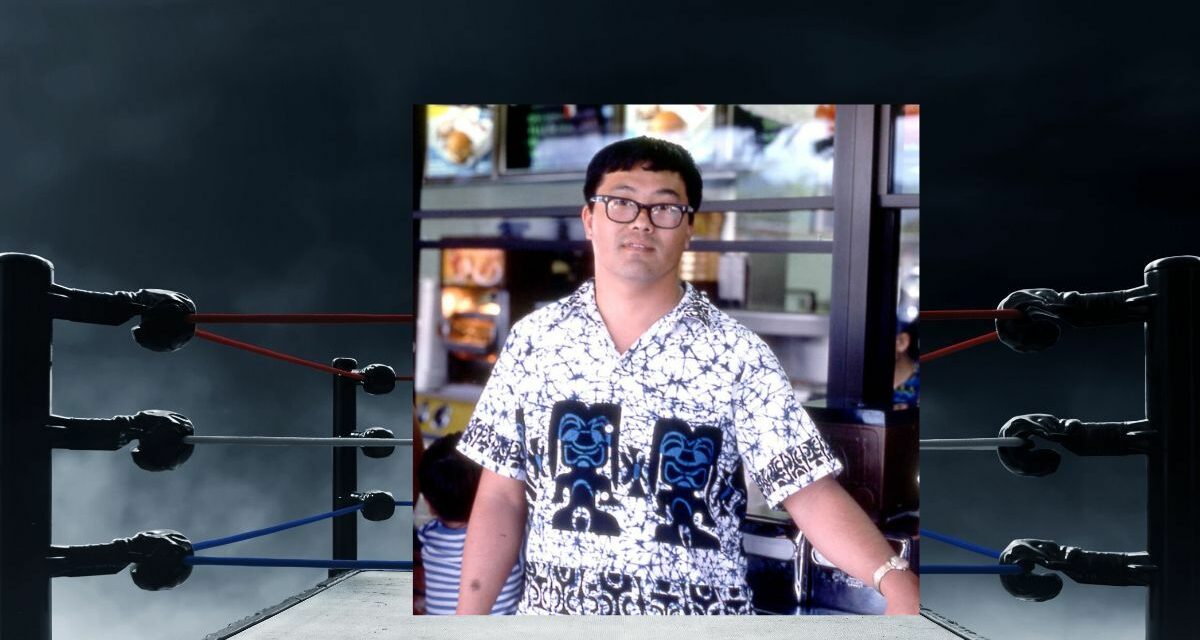 If you were a die-hard wrestling fan in the 1960s and 1970s, you cannot have missed a regular feature article in Wrestling Revue magazine, “Action in Honolulu”, with photos and report by George Beppu. George became a fixture at Honolulu Wrestling, at Block Arena (in Pearl Harbor), the Civic Center then Honolulu International Center (HIC) which later was renamed to the Neal S. Blaisdell Arena, which holds close to 8,800 seats for wrestling.

George became fast friends with many of the local and visiting wrestlers in Hawaii.

A major noted wrestling photographer and correspondent in Hawaii, George regularly submitted reports of Hawaii wrestling for the national wrestling magazines since the mid 1960s. In 1972, he wrote and printed the Hawaii Wrestling programs for Ed Francis, then promoter of Hawaiian Pro-Wrestling.

George T. Beppu was born on January 24, 1942 in the territory of Hawaii before statehood was achieved. He was born in the main hospital in the city of Honolulu. His family has always resided in the Hauula area. He worked at a Kuakini Market in high school.

He attended a small school in Hawaii for a business certificate right after high school. For most of his early adult life, he resided in Aiea, Hawaii, which is part of a Honolulu suburb on the Island of Oahu. It is just a short distance from Pearl Harbor.

George served in the Hawaii National Guard before moving to California in the mid 1970s to open up a Sambo’s Restaurant. After that adventure, he opened up his own sandwich shop with his wife called Sweet Caroline’s. In 1979, he lived in Simi Valley and there his daughter, Lori, was born. He had moved three times between 1979-1983. 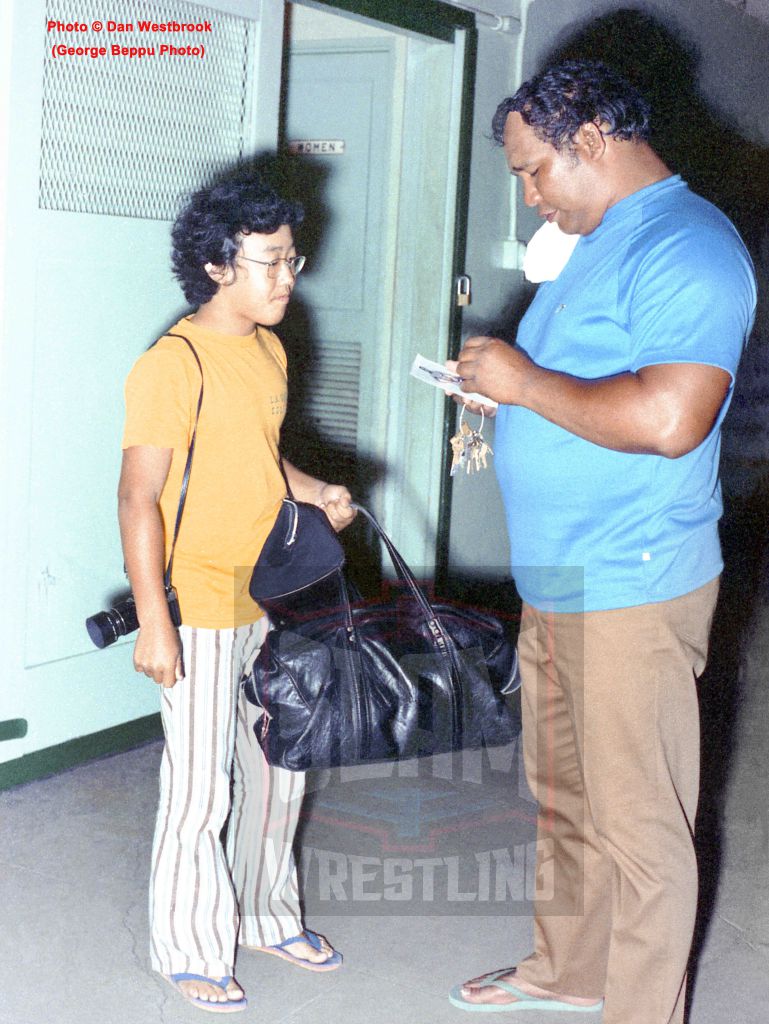 He had a combined 34 years of service in the Air National Guard with most of it being in California with the 146th Airlift Wing, out of Van Nuys and then the Channel Islands.

He loved photography, wrestling, the Little League World Series, and his grandchildren. He also was always closely connected to his culture and organizations and all things Hawaiian. George, to those who knew him, was a soft-spoken, gentle-hearted and kind individual.

George died on October 20, 2021, in Brighton, Colorado, due to COVID-related complications. He was 79. George is survived by his son Ryan and daughter, Lori, three grandchildren, Jonathan, 15, Adam, 11 and Katherine (Katie) 9. 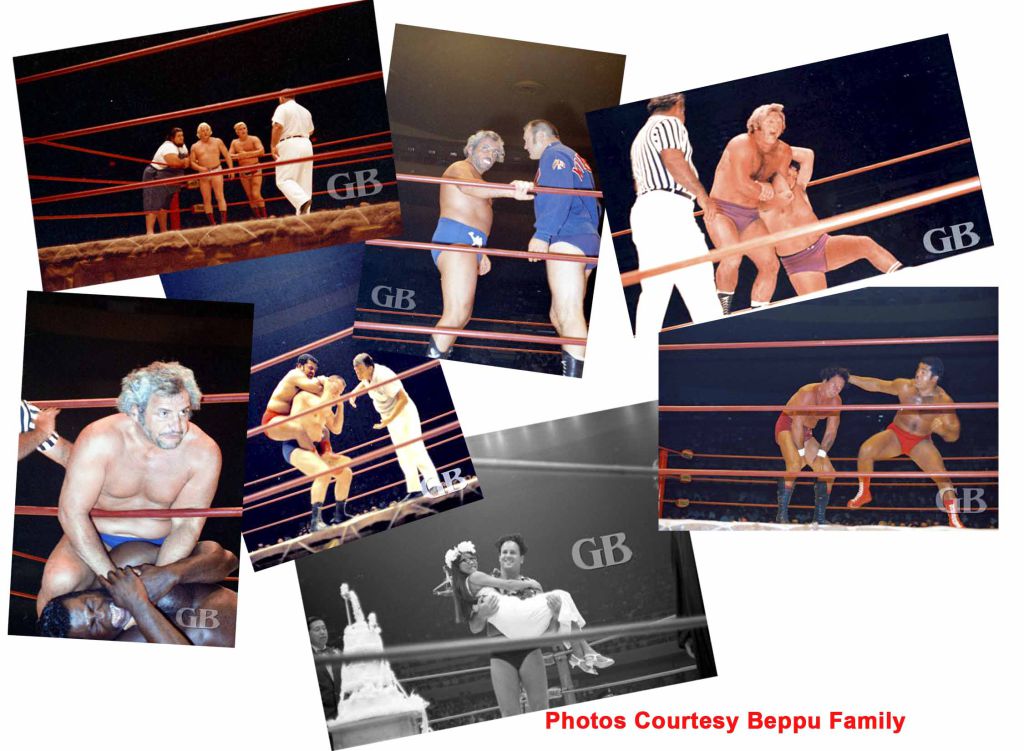 A collage of George Beppu photos.

Author’s Note: I personally knew George since 1969 and corresponded with him as a pen-pal, exchanging photos, news clippings, programs, and more. In August of 1971, I finally met George when he travelled to L.A. to attend the huge LA Coliseum Wrestling show featuring Fred Blassie and John Tolos. In 1972, I helped George with pictures and results when he took over creating a new Hawaiian Wrestling program for Ed Francis. In 1974, George met my fiancé from Japan, in Honolulu, on her way to Los Angeles. In early 1975, I met George on his home soil and stayed with he and his wife for a couple of days before I went back to Los Angeles. I had just come in from Japan. George showed me all the sights on Oahu and even had access to Schofield Barracks, a military installation. He introduced me to a very young Wally Yamaguchi, a Japanese wrestling fan who was attending International school in Honolulu. Later in life, Wally was very involved in Japanese Wrestling, helping with interviews and English translation for the foreign incoming wrestlers to Japan. Wally was quite a character.

George came out to visit LA again in 1977. We got together for a wrestling at the Olympic Auditorium (The Sheik vs Victor Rivera, for the latter’s America’s title). We both photographed the match. 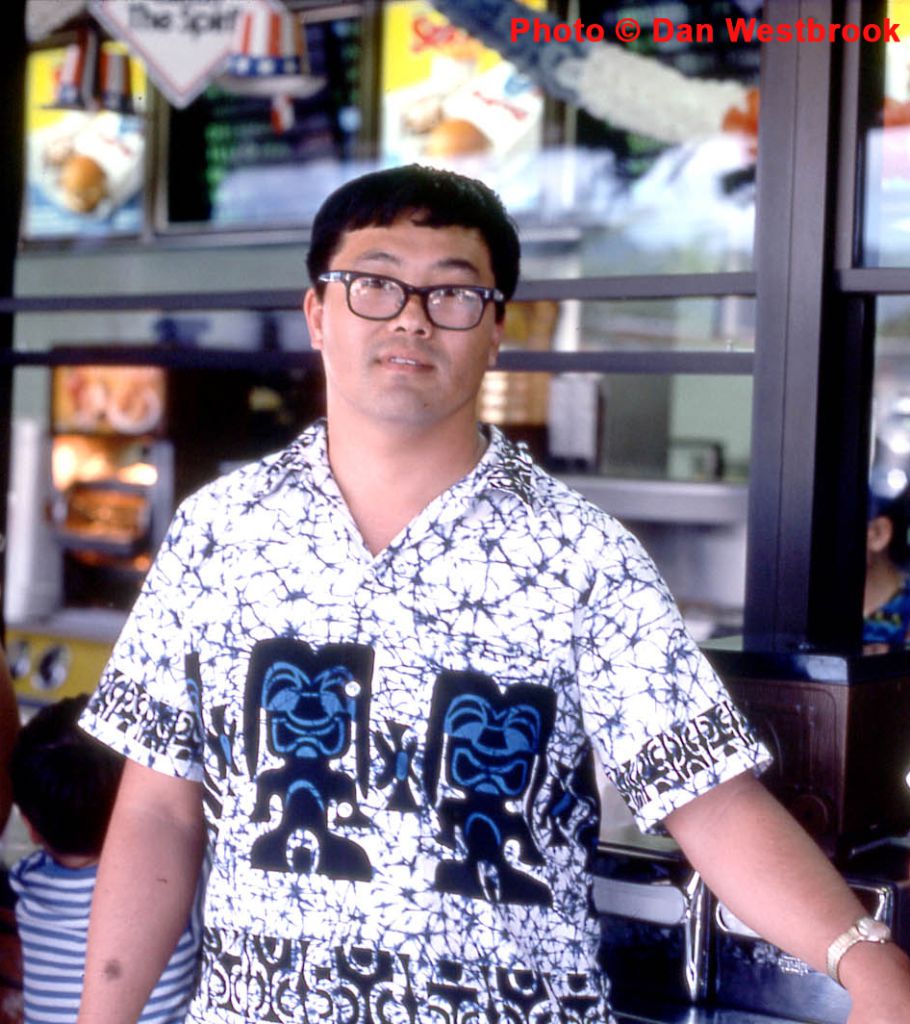 In 1978, my wife (who was Japanese) and I visited George and his family on the way back from Japan. They were perfect hosts once again. In 1979, George moved to the mainland, only to return to Hawaii for reunions and other events. George was also one of the last people to visit Lord James Blears in the hospital before Blears died in 2016.

I visited George also in Las Vegas in 2010, where he leased a time-share. He had remarried in 1999 after going through a divorce and he came out to Los Angeles to visit me with his second wife. His second wife passed away in 2009.

George contributed many of his pictures to the outstanding website, 50th State Big Time Wrestling, run expertly by Bill Atkinson.

Through the years after, we corresponded with each other via letters and emails. I always kept George up on the latest wrestling news. He had planned to attend a Cauliflower Alley Club reunion in Las Vegas but somehow things didn’t work out. He had moved in with his daughter’s family in Colorado and had a new job of live-in “grandfather.”

George will be sadly missed by all and was a remarkable soul. He must be in “Wrestling Heaven” as we speak, ready with his camera to take the ideal shot…

— with files from Lori Beppu Colley 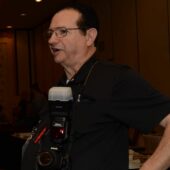 Dan Westbrook is a long-time photographer based in California.