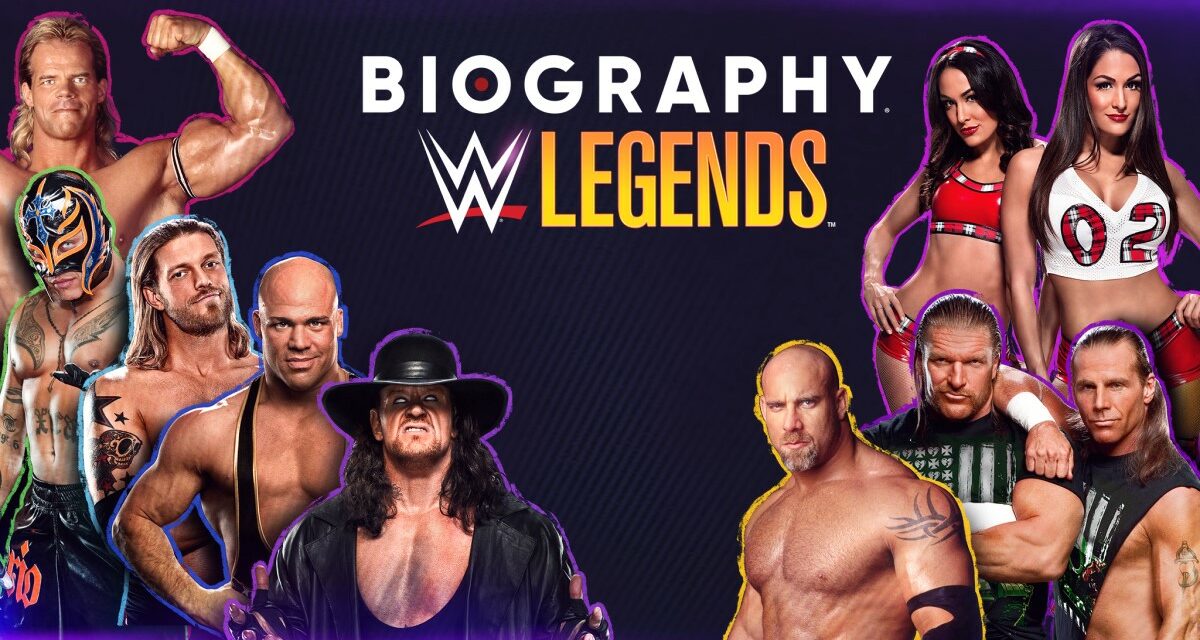 Technically wrapping up season two of WWE/A&E’s actual Biography episodes (next week is a show dedicated to the first WrestleMania) is Rey Mysterio who, like Edge (who was featured last week), is still very much an active competitor, so it makes for a different feel when both wrestlers might be showing up on Raw the next night.

As usual, for those that have seen WWE documentaries on Mysterio already, there’s a lot of information in here that you’ll already know. Where this episode succeeds is going beyond that and offering something for both knowledgeable fans and newcomers at the same time.

The very first image of the show is a very young (and unmasked) Mysterio alongside a quote by Konnan commenting on, naturally, just how small Mysterio has always been. It’s his number-one calling card, and it has defined the David VS. Everybody storyline that fuels almost everything Mysterio has done in the ring.

Rey then takes us back to 1974 when his mother went over the border from Tijuana to San Diego to ensure his U.S. citizenship. His fondest memories, though, were of returning to Mexico to watch his uncle Rey Misterio in the ring. With Mysterio’s family moving back to Tijuana for work purposes, his training under his uncle began.

Konnan shows up on camera and talks of coming in to the class where he immediately clicked with Rey, while the elder Misterio admits that he never took it easy on his nephew — and probably went harder on him because of their familial connection. Seven years later, making Mysterio the grand ol’ age of 14, he begins his career not, as he assumed, as Rey Misterio, Jr., but as “The Green Lizard”.

Misterio, in his home backed by shelves and shelves of masks and memorabilia, Bruce Prichard (who always plays a big part in these Biography episodes), and Mysterio, walk us through the history and legacy of lucha libre, going back to Aztec and Mayan warriors donning masks before battle. The honour of wearing a mask is exemplified through the fame of El Santo, wrestler/movie star who was buried wearing his.

Back to Rey’s burgeoning career, now known as “El Colibri” (The Hummingbird), where his first journey to prove himself was up against promoters who dismissed him due to, you guessed it, his size. He keeps working his way onto shows and up the card, and in August of 1991 he receives a gift from his uncle while awaiting the start of a match: the name of Rey Misterio, Jr. Footage of the match is interspersed with Mysterio’s emotional memories of that night.

Two big developments come following that occasion: Mysterio meets Angie, his future-wife, though at the time she has to stop seeing one boyfriend to focus on her relationship with Rey, and Konnan recruits Mysterio to come for the start-up of AAA wrestling. Expecting their big break, the duo (and others they’re staying with) wait for the promotion to start up, but go through all of their money for a place to stay and sleep in gyms or under the ring to hold on as long as they can.

The next segment shakes up the timeline and brings us to “24 days until WrestleMania”, which is presumably number 38, as Mysterio chats with Masahiro Hayashi — his ring gear designer from way back on Rey’s first tour of Japan.

Back to Mysterio’s early days, Angie is supporting him as best she can until AAA finally launches to great acclaim and crowds. Sam Roberts recalls his first exposure to Mysterio, and presumes it was most American fans’ first look as well, was at the AAA show “When Worlds Collide” in Los Angeles. Also in the crowd that night? Mysterio’s parents, who he says had never really understood his passion for wrestling, but were impressed by their son at that show.

Another viewer who knew he had to keep his eye on Mysterio was Paul Heyman. He connected with Konnan and brought Mysterio and Psicosis to ECW in September of 1995, where they became favourites of the Philadelphia crowd as well as Heyman. The next door that Konnan opens for Mysterio is to the WCW as, following the former’s try-out match, he also gets an opportunity for the latter to show off his stuff, too.

In June of 1996, Mysterio wrestled at the Great American Bash, with former WCW president Eric Bischoff heaping praise, just like Heyman did, onto Konnan for brokering the lucha libre talent into WCW’s cruiserweight division. Though Konnan recalls the taunting of Mysterio by the big WCW wrestlers over his … wait for it … size, Mysterio prefers to remember the standing ovation he got from them when he came back through the curtain after his debut match.

He signs with WCW, a big achievement in his professional life, while he and Angie also welcomed their son Dominik to begin their own family legacy. Mysterio then walks us through his relationship with Eddie Guerrero, from meeting him in Tijuana as a fan to teaming and becoming as close as brothers. Bruce Prichard notes the importance of the Guerrero family, delicately stating that Gory Guerrero “spawned some really talented wrestlers”.

Mysterio and Guerrero face off at Halloween Havoc in 1997, with Bischoff recalling that he was gunning to have Rey lose the match and his mask, thought he says in hindsight that he didn’t appreciate how much that meant to Mysterio and any masked Latino wrestler. Footage from 2004 shows Guerrero saying he was happy to put Rey over that night instead, which is what ended up happening.

Bischoff, though, wasn’t done with the idea that he thought Mysterio would be a bigger star for WCW without his mask. By the time SuperBrawl IX in February of 1999 comes around, and Mysterio and Konnan are set to lose against Scott Hall and Kevin Nash with the stipulation again being Rey losing his mask, Bischoff can’t be convinced otherwise.

Mysterio is pinned, takes off the mask (only to be ridiculed by Nash who motions to him to put it back on), and recalls feeling heartbroken for his fans, his family, and for lucha libre. Konnan thought at the time that Mysterio deserved better, and admits he’s still kind of hot about it. Mysterio’s life in the ring without the mask, though, wasn’t all that bad, as he collects wins against heavyweights like Nash and Bam Bam Bigelow, setting the template for much of his career to come.

After the WWE’s purchase of WCW in 2001, Prichard and Jim Ross explain that there were no plans for Mysterio, with Ross advising him to spend time with his family. 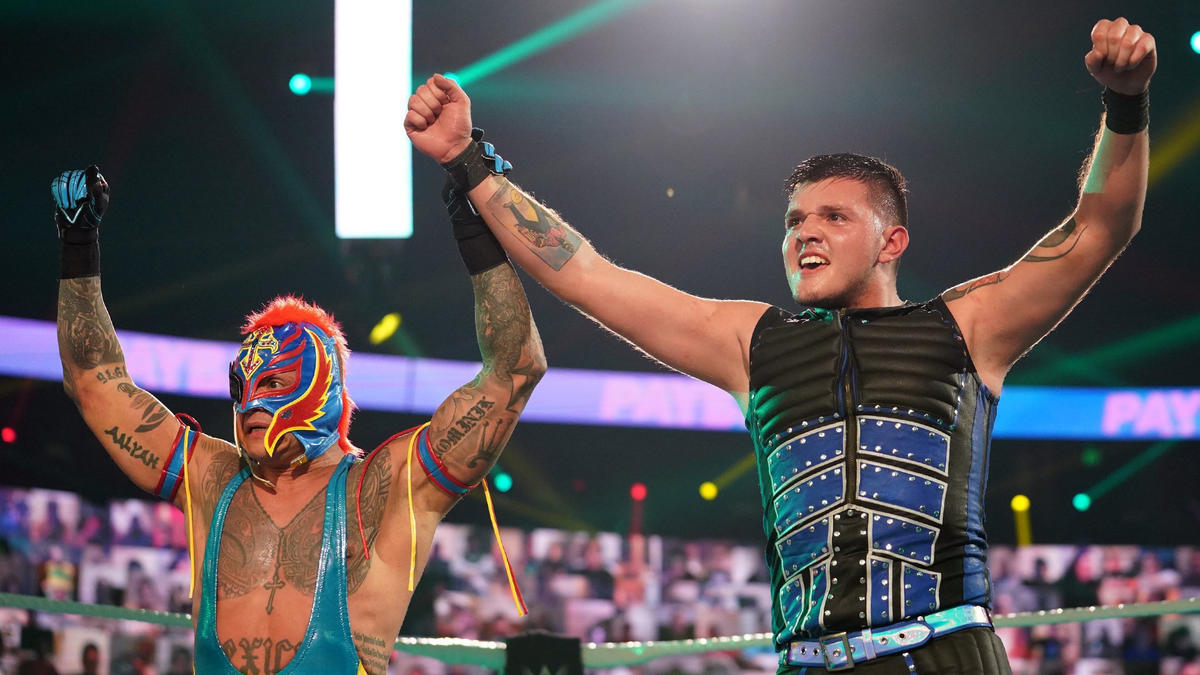 Angie recalls that she was pregnant with their daughter Aalyah, that Rey was worried because he didn’t think Vince McMahon would want a small guy like him, and she starts saying something about Rey hating her, but it sounds like an incomplete thought and she trails off. Off-camera, though, Rey encourages her to be honest tell the whole story, because he was “a dick” when she was pregnant with Aalyah.

Angie collects herself, holding back tears, and says that Rey made her cry a lot, calling her fat, and Rey says he was a  bad husband and a bad father at that time. The moment when Aalyah was born, Rey recovers himself and apologizes, and at that time Jim Ross calls and says the WWE wants to bring him in — with a mask, no less.

We’re back in more recent time, 18 days until WrestleMania, with Dominik and Rey working out at the WWE Performance Centre, before a series of clips from Rey’s landing on SmackDown in 2002 leads to the renewal of the feud between himself and Guerrero — including the custody angle that saw Eddie claiming Dominik as his own child.

Dominik remembers teachers pulling him aside and making sure that everything was okay at home, but to him he enjoyed the fun and games. It culminates in a classic “Custody Ladder Match” — well, classic if you enjoyed the Telenovela storyline.

Immediately following this high, Mysterio looks back to November of 2005 and the death of Eddie Guerrero. Ross remembers it as a very long day, while Prichard remembers contemplating if they should cancel the following Monday Night Raw, but instead decided to have a tribute show (though I can’t imagine that was a real conversation).

Mysterio follows that tragedy with one of his greatest years of wrestling, winning the Royal Rumble and then the Heavyweight Championship at WrestleMania 22. Throughout the rest of his time in WWE, both Angie and Aalyah admit feeling a certain joy if Rey was injured because it meant there would be weeks to months of having him at home. Mysterio, though, remembers it differently as he was often abusing his pain medication and was, in his words, at home but not really there.

A trip to rehab helps him kick his dependence on the pills, finding that stem cell treatment helps him continue doing what he loves in the ring, though Dominik figures his dad should just be relaxing on a beach somewhere.

More tragedy follows in 2015, during a AAA show in Tijuana, when a Mysterio dropkick and 619 hits Perro Aguayo, and somewhere in that sequence of maneuvers Aguayo suffered a broken neck and heart attack leading to his death a few hours later in hospital. Mysterio talks about facing Aguayo’s family at the funeral and asking for forgiveness, and though they told him it was not his fault, Dominik wonders how getting back into the ring isn’t traumatizing for his father.

Mysterio returns to the WWE in 2018, leading to his current run teaming with his son, winning the tag team championship with him, and looks back on his career with pride, and notably no hints at wrapping things up anytime soon.

This was a very well-told Biography, darting around the timeline a bit as it suited the story and allowing for some very honest thoughts from many involved. This episode, more than any other from season one or two of this series, also felt more like a third-party documentary and less like a WWE production.