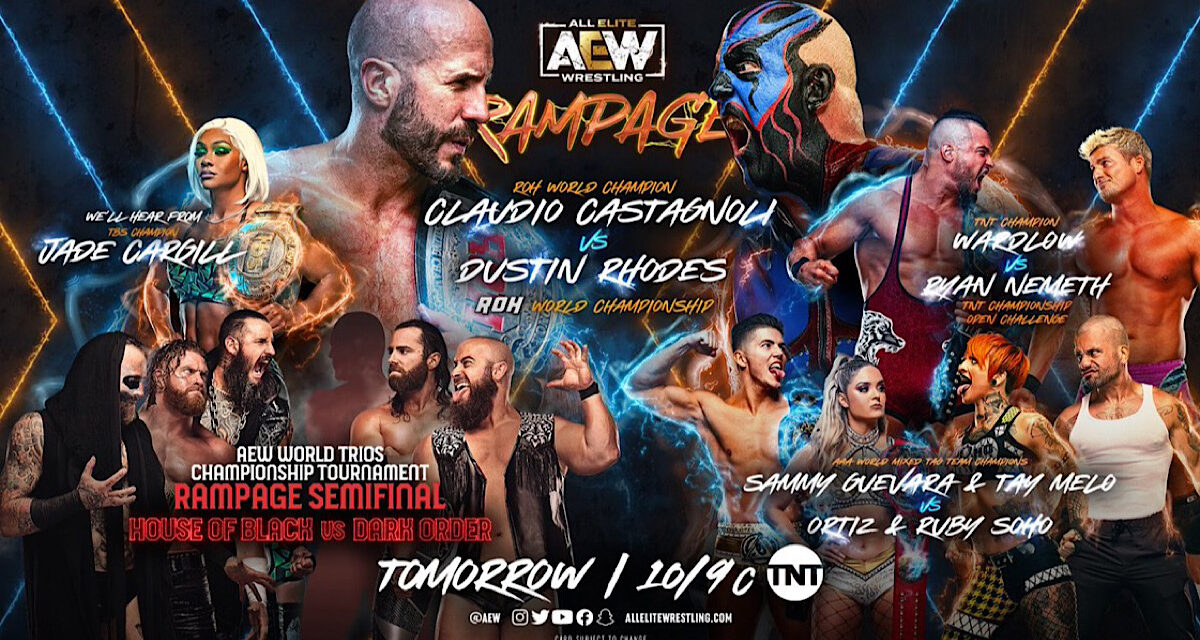 It’s Friday night and you know what that means? No, no to fat shame or go on suspension. It’s time for AEW Rampage, where we not only get another Trios tournament match, but the Ring of Honor World champion Claudio Castagnoli will face a tough challenge in “The Natural” Dustin Rhodes.  Can he take the big prize this night?

We’ll find out from the Wolstein Center in Cleveland, OH.  Excalibur, Tony Schiavone, Chris Jericho, and “Good old JR” Jim Ross have the call and we start with the First Match of the night for the… 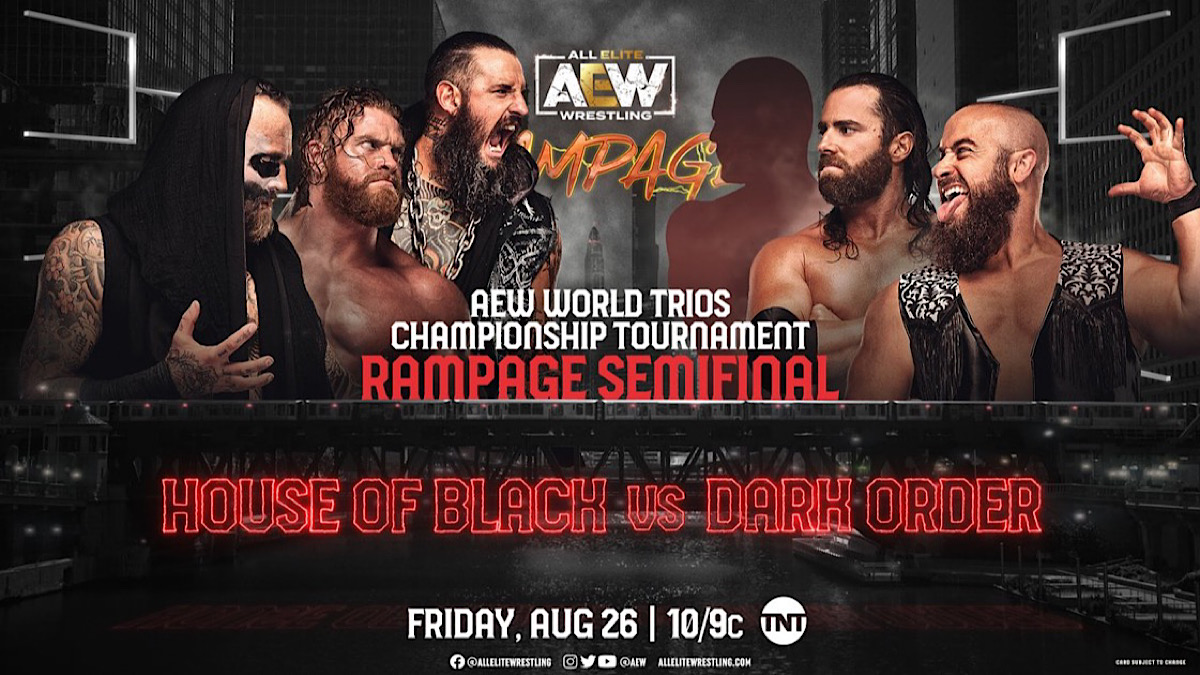 Vance and King start and  then “10” pulls up hurt with his bad leg.  He tags Silver in, and King gets Matthews in , and “Johnny Hungee” outwrestles Matthews easily.  Then a tag to Reynolds, and now Black is in playing mind games.  It’s not long before we get a Pier Six and the  match goes everywhere in and out of the ring.  Reynolds is in trouble during Picture in Picture, and he is a Dark Order in Peril.  Once he gets the hot tag to Vance, he is a Ten En Fuego.  But Malakai Black is in the ring, and manages to rip off his knee brace and go for a knee bar submission, but then Miro comes out and provides the necessary distraction for Reynolds to roll up to Black for the pin, which means…

Your Winners, and Advancing in the AEW Trios Championship Tournament:  The Dark Order

After the match, Miro gets the brunt of The House of Black.  All of a sudden Sting and Darby Allin come into the ring, and they clear house, and now things are becoming more interesting heading into the All Out PPV.

Lexy Nair is with Hook for comments on what Angelo Parker and Matt Menard said, but he doesn’t care. As he walks off, Menard and Parker come out to claim that Hook is running scared and wondered what if they beat him down.  What if…?

Lexy Nair speaks to #FTW Champion #HOOK, but #JerichoAppreciationSociety’s Daddy Magic and Angelo Parker have some words of their own tonight. Tune in to #AEWRampage right now! pic.twitter.com/iH23HIVh9x

And now for a match that someone made, it’s time for the … 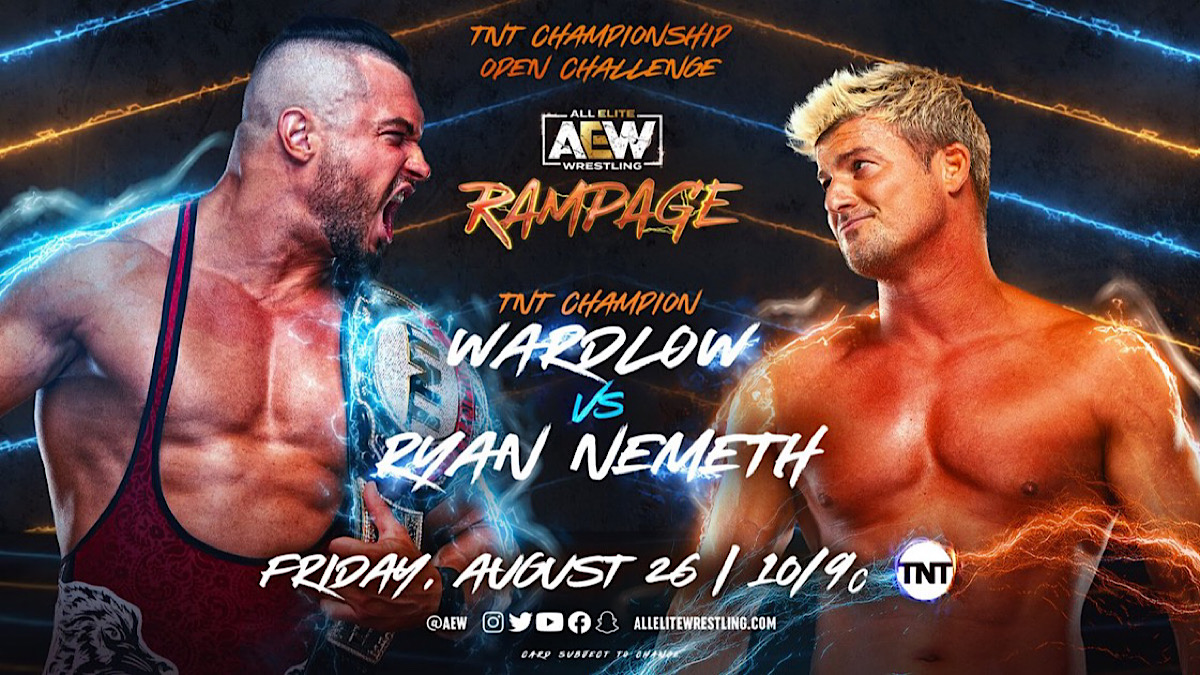 Yeah, here’s the deal:  I have no time for this match, so here’s your Haiku in Review™:

For concerto on Poor Man’s

Your Winner via Pinfall, and still AEW TNT Champion:  Wardlow

Kenny Omega is back, if you missed it. Also, this happened as an exclusive after the cameras stopped rolling, so enjoy!

Andrade and Rush are backstage with Private Party, and they aren’t happy they didn’t get the job done last week against Swerve in our Glory.  El Idolo states plainly that everything has consequences, and if they can hurt Dragon Lee and unmask him, then what could happen to Isaiah Kassidy and Marq Quen?

Andrade Family Office and Private Party discuss their recent losses and what this spells for the near future… Tune in to #AEWRampage on TNT right now! pic.twitter.com/iHcOtKUGN6

But let’s ponder that fate another day since the next match is:

Maybe I didn’t have a Snickers (or I had a ton of rum, allegedly) but my patience is wearing thin for these AEW DARK matches that are creeping up in force, but the fact is, I would rather give you a Butternut Squash Power Bowl recipe than going into detail that Hobbs beat the jabroni with a spinebuster which means that…

Your Winner via Pinfall:  Powerhouse Hobbs

After the match, we see on the AEW ‘Tron that The Factory attacked Ricky Starks, and QT Marshall says that it’s on the house.  Hobbs is happy, but what will it cost down the road?

#TheFactory keeping their word to Powerhouse Hobbs & doing the dirty work with a cheap shot to Ricky Starks!

Tune in NOW to #AEWRampage on TNT! pic.twitter.com/O2Wy853h0c

Lexy Nair is with Jade Cargill and The Baddie.  Cargill ain’t happy with her Baddies, nor with Nair, and she dismisses them all before laying out that if Athena wants her to come get these hands.  Thankfully Athena is nearby to respond ahead of All Out, and this is adding fuel to the fire.

TBS Champion Jade Cargill challenges Athena to a match at #AEWAllOut, but an enraged Athena seemingly cannot wait until the PPV to get her hands on the Champ! Watch #AEWRampage on TNT right now! pic.twitter.com/VA4aVwERmV 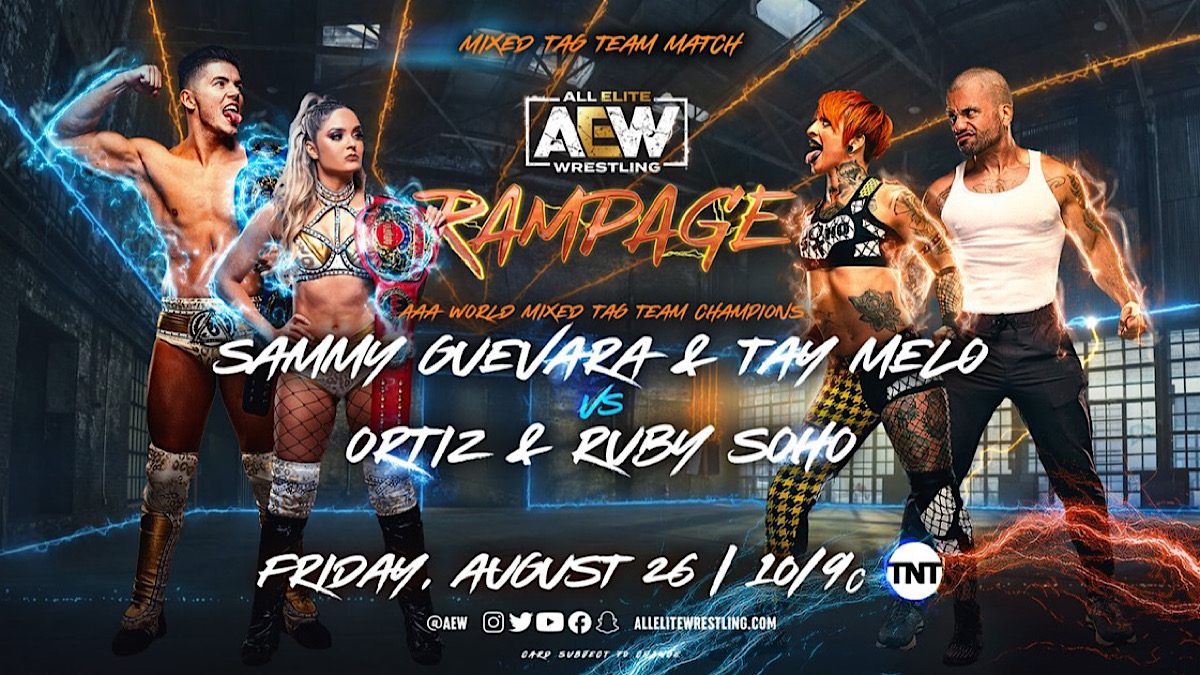 Sammy Guevara and Tay Melo (with MAtt Menard) vs. Ruby Soho and Ortiz

Since this is a mixed tag team match, only the same gender can be in the ring, and that has to be the dumbest rule in the world.  Nevertheless, Melo and Soho start off and the Brazillian works the injured arm of Soho, but an elbow strike by Soho break its up and she tags in  to Ortiz.  He and Guevara go at it, but then they double-team The Spanish God.  But Melo distracts Ortiz and then during Picture in Picture, things arerent looking good before he fires back at with a clothesline  to Guevara for the hot tag and Soho is en Fuego.  She lands a running boot to Melo for a two count, and the  Guevara is in the ring and the ref stops thing before anymore violence can happen between genders, and this is why I am annoyed by this dumb@$$$ rule.  Melo knocks off Ortiz and then Soho is in an electric chair by Guevara, but she nails a poison ‘rana to cover for a two count.  A knee strike by Soho Melo should have been enoiugh but Guevara pulls her off, and Ortiz gets  tagged in.  Anna Jay comes out to  throw Soho to the steel steps, and Ortiz  is hit by Guevara wih a cutter for three count to end this match.

Your Winners via Pinfall:  Sammy Guevara and Tay Melo

Theres recaps of last week’s AEW Dynamite match between CM Punk and Jon Moxley match.  You should read it here to see why they did this match ahead of All Out, and see here what happened after the match:

Mark Henry is with Rhodes and Castagnoli. This is his opportunity and shot at a World Title and Rhodes promises this is the best “Natural” Dustin Rhodes he will get.   Castagnoli wants to face a legend, and competition is all it’s about in the Blackpool Combat Club, and he states that while he respects Rhodes, he will shatter dreams.

Well, that’s been enough talk, since it’s time for the Main Event.  Caprice Coleman is at commentary, as Bobby Cruise Beautifully (sorry Justin Roberts), gives us the… 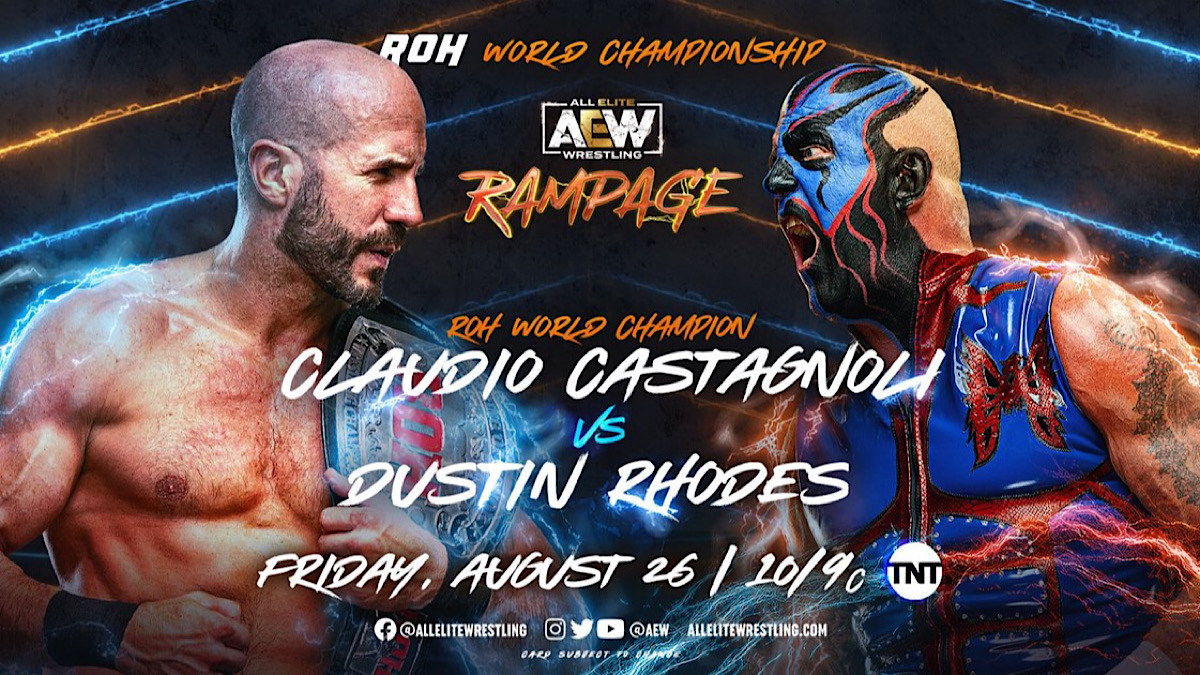 The Code of Honor observed and both men tie up.  Neither one gives an inch, but then Castagnoli gets an arm drag for a two count, and then he throws Rhodes hard at the bottom rope to give him some whiplash.  He gives a European uppercut to Rhodes, but The Natural returns with a boot to Castagnoli’s head for just a one count.  He goes for a crossbody and Rhodes misses the mark.

During Picture in Picture, Castagnoli cranks up the submissions to keep Rhodes grounded.  He goes for a crossface but Rhodes picks him up and slams him hard to the mat.  After that, it’s a slugfest by both men until a cannonball to the outside by Rhodes catches Castagnoli, and he follows with a clothesline for a  two count.  Rhodes continues with a huracanrana(!) followed by a Code Red (!!) for a very close two count.  The fans are invested, with “You still got it!” chants to Rhodes, but a lariat by Castagnoli followed by the Big Swing for a ten count is enough for a pin, but only gets a two count.  Rhodes comes back with a powerslam followed by a modified powerbomb for a close two count.  Rhodes shoots Castagnoli to the ropes, but as he leaps he gets clipped on Rhodes’s head in the…err, mini Swiss Alps.  The Andersons tell Rhodes to go in for the kill, but Castagnoli lifts him for an elevated European uppercut and he covers for the one, two, and three.

Anderson is on on the mat, and he is just beside himself on the lack of urgency by Rhodes, but Castagnoli celebrates another title defense as the show goes to credits.

Again, The trios and the Main event are the reason this show succeeds.  Everything else gets a big ol’ “meh” from me.

That’s the short of it since I have a double PPV to prepare for, so see you in seven!