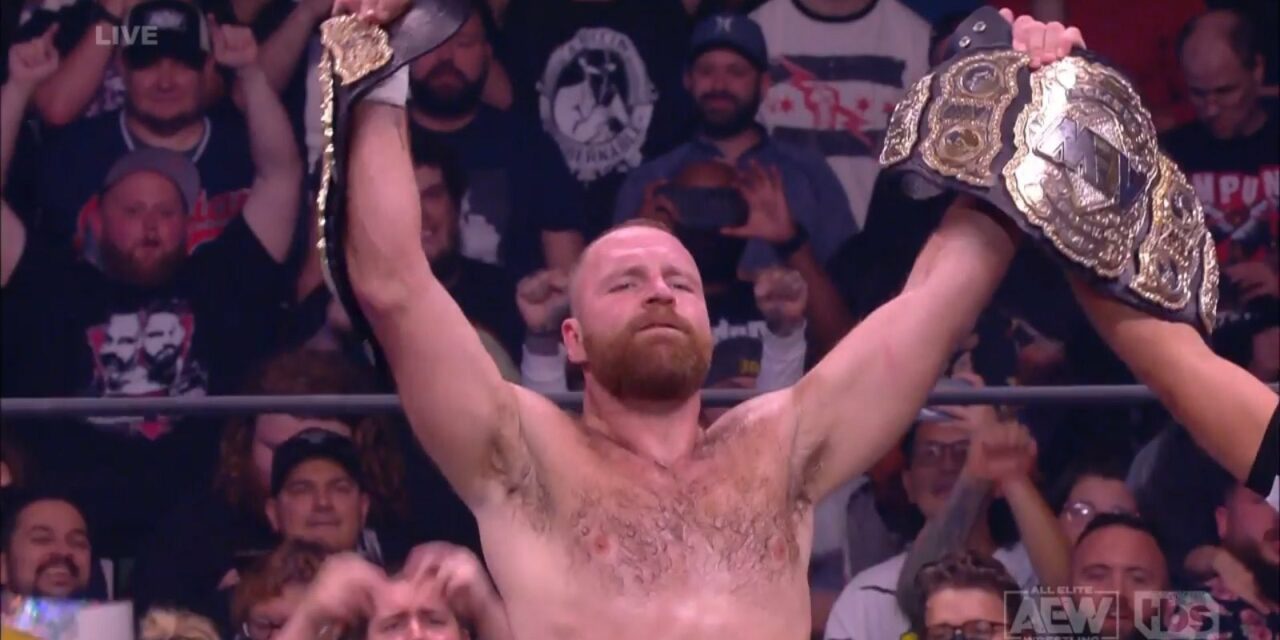 AEW Interim champion, Jon Moxley, and AEW Heavyweight Champion, CM Punk, were supposed to unify the title at All Out a week from Sunday, but why wait? Let’s do it, tonight. There’s no way this match is ending cleanly, though, right. Especially with whispers of a certain heel, MJF, maybe, possibly returning to AEW. Let’s get to the action.

Well, the action will have to wait, as Chris Jericho is going to meet with Daniel Garcia face to face to find out where he stands with the JAS. Jericho asks Garcia to come to the ring. Daniel is a bit hesitant entering the ring. Jericho knows emotions were running high last week, but Garcia did put his hands on him and Chris wants an apology. Garcia dresses down Jericho for ruining the show of respect that Bryan Danielson gave him after their 30 minute battle.

Jericho calls him the best technical sports entertainer and Chris wants him to say as the crown calls him a wrestler. Before Garcia can give an answer, Bryan Danielson walks out. Danielson tells Garcia he can be whatever he wants, but he agrees with the people. Garcia is a wrestler. Jericho demands that Garcia call himself a sports entertainer. Garcia just can’t do it and wants to be left alone. Jericho tries to grab him and Garcia shoves him to the mat. Garcia leaves the ring. Danielson tells Jericho that was pretty entertaining. Jericho hears that Danielson is the greatest wrestler, but he hasn’t seen it. Chris calls himself the best of all time. Bryan asks Jericho who would Stu Hart or Owen Hart call the better wrestler. Sounds like Bryan wants a match against Lionheart Chris Jericho, but not here in Cleveland. They’ll face each other at All Out.

The two fire out of the gate, trading takedowns. They lock up and then trade chops. Lethal hits a Russian leg sweep off the ropes. He goes up top, but Harwood cuts him down on the turnbuckle. Lethal is able to sends Dax to the mat, but Harwood catches him with a shot to the gut. Dax with a release German suplex. Lethal looks for a figure four, but Harwood fights him off. Lethal hits a dragon screw in the ropes. Harwood drops to the floor, where Lethal connects with a suicide dive. Back in the ring, Lethal fights off Dax with up kicks. Harwood counters the Lethal Injection and hits a Liger bomb. Lethal kicks out. Harwood counters a dragon screw and nearly gets a pin by sitting down on Lethal. Dax locks in a Sharp shooter, when Sonjay Dutt leaps to the apron. The distraction nearly costs Dax the match, but he kicks out. The two trade chops. Harwood with an O’Connor roll, but Lethal reveres and grabs the tights to get the pin.

Sonjay Dutt informs Harwood that FTR will be facing the Motor City Machine Guns and Jay Lethal at All Out.

Tony Schiavone is backstage with AEW Women’s World Champion Rosa, who announces that she is relinquishing the title due to injury. A new champion will be crowned at All Out. Rosa vows to come back stronger and better.

Stokely Hathaway watches from the crowd. Colten shoves his dad in the back and then hides in the ropes. Colten then bails out of the ring again as we go to break. Austin distracts Billy and Colten catches him with a straight right hand. He stomps his dad into the corner. Billy comes out of the corning with a lariat. Billy stomps his boy in the corner. On the floor, Austin and Stokely attack the Acclaimed. Colten hits a low blow with the ref distracted. Colten hits the Colt 45 and gets the pin.

After the match, the Gunns and Hathaway put the boots to Billy and the Acclaimed. Swerve Strickland and Keith Lee run down to make the save.

Death Triangle and the United Empire have words backstage.

Bake and King throw hands. King misses a kick to the head. Baker beats her down in the corner. King connects with a missile drop kick. Baker escapes a full nelson and decks King in the jaw. King goes up and over in the corner. Baker catcher her and drops her face first into the turnbuckle. King tosses Baker across the ring with a German release suplex. She drives Britt into the mat with a full nelson slam. A thrust kick sends King to her knees and Baker stomps her into the mat. Britt puts on the gloves and applies the Lockjaw. King submits.

Baker grabs a mic and says what happened to Thunder Rosa is a shame, but she defending her title with a broken wrist. She calls out Toni Storm, who comes to the ring. Jamie Hayter attacks Storm from behind as Baker drapes her self in a Pittsburg Steelers towel. Hikatu Shida runs down with a kendo stick, sending Baker and company scurrying to the floor.

Swerve in their Glory don’t mind saving the Acclaimed, they love those guys. The champs then challenge them to a tag team title match at All Out.

The two lock up in the middle of the ring. Mox pushes Punk into the corner and unloads with elbows. Punk answers with a slap and beats Mox into the opposite corner. Punk lands a roundhouse kick, but may have re-injured his left foot. Punk hops into a massive lariat. Mox rains down elbows and then wrenches the foot. Mox with a Death Rider. He hits a second Death Rider and covers to get the pin. Moxley wins.

Christian Cage wants to extended an olive branch to Jungle Boy. JB may not have apologized for losing the tag team titles and for what he said. Cage was just showing him some tough love. Christian accepts Jungle Boy’s challenge at All Out.

Ricky Starks is in the ring and he BIG MAD. He has to deal with Team Taz falling apart, the Factory coming after him and Powerhouse Hobbs turning his back on him. Hobbs was with him every step of the way when he broke his neck. Ricky reminds Hobbs when he was just a background player in Jacksonville. Starks made sure that there was enough spotlight for the both of them. Ricky calls him a snake and he is going to cut his head off. Ricky wants him at All Out.

Backstage, Mox is fired up. He is the answer to every problem in professional wrestling. He is the GUY.

Fenix and Ospreay open the match countering and reversing each other moves. Fenix overs a hand shake of respect; Ospreay kicks him in the face. All six men brawl in the ring. Davis and Fletcher are taken out by cutters and Ospreay takes a huge back drop. Death Triangle soars over the rope to take out their opponents on the floor. Penta chops Ospreay on the ropes. Fenix tags back in, hitting a low drop kick after a snap mare.

After a commercial break, Davis sweeps out Fenix’s leg from the floor. Ospreay takes out Pac and Penta with a sky twister. Aussie Open launches Will into Rey in the corner. Davis and Fletcher double team Fenix. Best Friends, Orange Cassidy and Danhausen watch from the crowd. Fenix is bounced between Fletcher and Davis with elbow strikes. Fenix fight back, hitting a double arm drag. Penta tags in and hits a cross body on both men. Penta gets worked over by all three opponents and we go to break again.

Pac shoulder Ospreay in the gut and then takes out Aussie Open on the apron. Will tries to fight off the dead lift German suplex, but Pac is able to get him over with a helping kick from Fenix. Ospreay kicks out of the bridging pin. David and Fletcher trade kicks with Fenix and Penta. Pac and Ospreay then hit their respective opponents with dueling poison-ranas. Pac and Ospreay stare each other down. The two trade blows in the middle of the ring. Pac with stiff kicks. Ospreay hits a enziguri and follows with the Oscutter. Both men are down.

Ospreay pulls Pac to his feet, only to chop him down. Pac escapes the corner and hangs Will on the top rope. Pac connects with an avalanche brain buster and we go to one more break.

Fenix with a hurricanrana to Ospreay off the top turnbuckle, but Will lands on his feet. Fenix hits with a cutter. Penta takes out Davis on the floor and Fenix follows to take out Fletcher. Pac with a black arrow off the top, but Ospreay gets his knees up. Pac counters the Stormbreaker with a destroyer. Ospreay kicks out of the pin. Fenix gets the tag, but gets knocked out of mid air by Davis. Penta super kicks Davis before eating a super kick from Fletcher. It doesn’t faze Penta, who launches himself off Davis to hit Fletcher with a destroyer. Pac with  DDT to Ospreay. He goes back up top, but Fletcher pulls Will out of the ring. Pac launches himself off the ring post to take out Fletcher and Ospreay with a moonsault. Pac is distracted by a fan with a box over his head. It was a set up. Kip Sabian attacks Pac from behind. Davis hits Fenix with a lariat. Fletcher kicks Penta off the apron. Fenix with the assisted Oscutter and covers Fenix to get the win.

Winner via pinall: The United Empire

After the bell, Kenny Omega and the Young Bucks walk down the ramp. Ospreay wants them in the ring. That’s a wrap, see you in seven.

The trios match was pretty much given 30 minutes and for good reason, search it out and watch it. I’m going to give AEW the benefit of the doubt with Moxley beating Punk in under five minutes to unify the AEW title. I’m sure there’s a longer story being told here. The Acclaimed got beaten down, but they also now have tag team title match with Billy Gunn in their corner.