Impact: VXT Defend and Eddie Edwards has a proposition for Josh Alexander 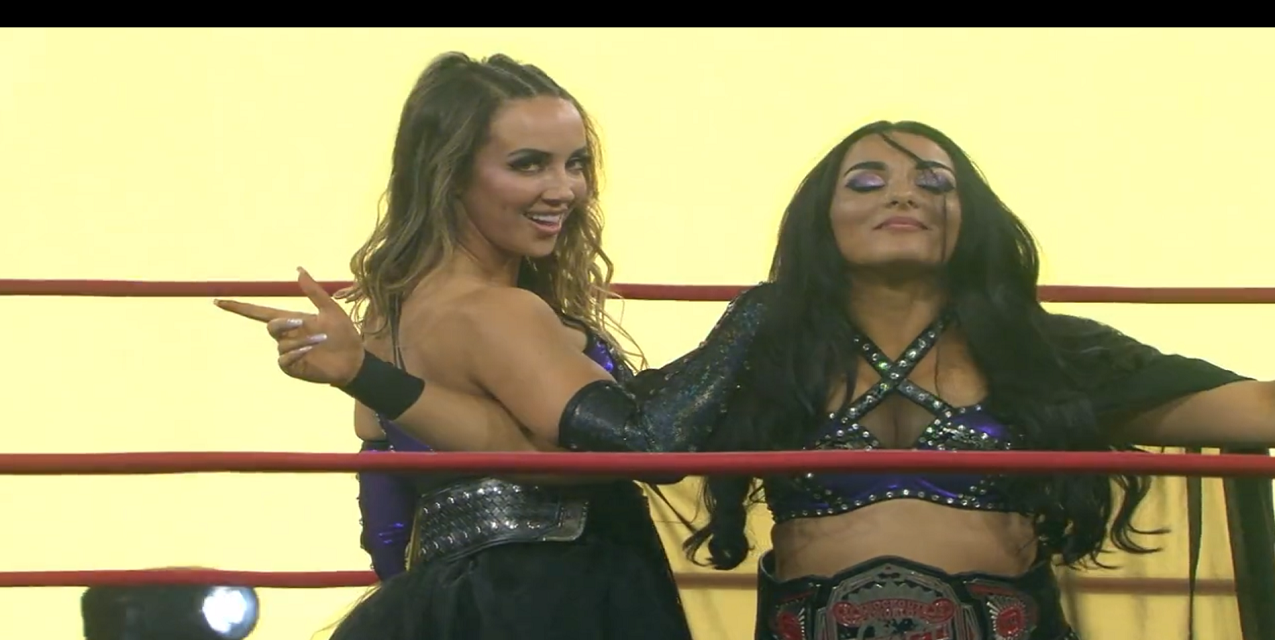 Greetings and Salutations all! We are working towards Victory Road on September 23rd and Bound for Glory on October 7. While the main event of Bound for Glory has been established as Josh Alexander defends his Impact World Championship against Eddie Edwards, we still don’t have much of a card for Victory Road in September. This episode of Impact should clear things up a bit more for both shows. Without further ado, lets get to it.

Grace and Green got the match started and Grace had the early momentum in the match as she used her strength to gain the advantage. Purrazzo came into the match but she was also out-strengthed by Grace. As the match went on, VXT came back and started beating on Grace. Green then hit a beautiful DDT to Grace.

Yim was eventually tagged into the match but VXT was able to use many double team moves against her to show how cohesive of a team they are. As VXT was splitting the ring, Yim was able to find a moment to gain enough of an advantage after Purrazzo mistimed a move. Grace was able to get the hot tag back into the match. Grace woman-handled the champions as she used her strength to gain the momentum again and sent the champions to the outside. Grace and Yim followed that up with a double suicide dive that hit both members of VXT.

Purrazo was thrown back into the ring but Green distracted Grace long enough as she was entering the ring in order to gain control of the match again. VXT then hit Grace with their Pendulum for the pin.

The stipulation to this match is that if Mike Bennett loses then Maria will be banned from the match when the OGK face off against the Good Brothers for the Impact Tag Team championship.

As the match started, the commentators mentioned that this ribalry has been going on since their New Japan Pro Wrestling days. Anderson was able to gain the early control as we went to commercial. Back fromt he break, Bennett was dominating the match. Bennett ran the ropes several times before landing a devastating eye poke to Anderson. Maria made her presence known in the match but the referee stopped her from getting involved. Matt Taven then made his way to the ring.

Taven wanted to get involved but before that happened, Luke Gallows made his return and chokeslammed Taven on the ring apron. Anderson took control of the match and hit the Gun Stun on Bennett for the win which means that Maria is banned from ringside when the two teams face off for the titles.

Backstage, Scott D’amore meets the Good Brothers after the match and said that next week on Impact, they will in fact face Bennett and Taven for the titles.

Savannah Evans was being treated in the medical room with Tasha Steelz by her side. Once Steelz left the room, Gia Miller wanted an interview with Steelz but before Steelz could say anything Killer Kelly grabbed her from behind and locked the Killer Clutch. Kelly didn’t hold the move long and said that next time, she won’t see it coming.

Impact Digital Media Champion, Brian Meyers is on commentary for this match.

As for the actual match, it was a squash as Bhupinder hits Hotch with a Gargoyle Spear.

After the match, Meyers entered the ring and hit Gujjar with a cheap shot. Meyers then shoves the referee, Scott Armstrong. Armstrong pushed Meyers back and Gujjar hit Meyers with a Gargoyle Spear. Gujjar pinned Meyers for the three and ran off with the Digital Media Championship.

Scott Armstrong caught up with Bhupinder Gujjar and said he liked what he saw from him against Meyers. Armstrong then asked for the title back but Gujjar said that if Meyers wants the title back then he could get it himself.

.@WWEArmstrong caught up with @bhupindergujj4r backstage to TRY and take the Digital Media Championship back but it looks like @Myers_Wrestling might have to be the one to do it!! #IMPACTonAXSTV pic.twitter.com/VeoWmSkfM7

Josh Alexander started the match quick and furious but Vincent hit a Redrum out of nowhere for a two-count. Alexander came back quickly and wasn’t able to hit the C4 Spike but did eventually lock in an Ankle Lock on Vincent. Vincent made his way to the ropes for a break.

As both men got up and the match restarted, Vincent hit a Guillotine in the middle of the ring but Alexander was able to counter this into a Suplex. Alexander then quickly hit his C4 Spike and scored the win in the non-title match.

After the match, Eddie Edwards was at the entrance ramp with a mic and said that he and Alexander don’t have to be enemies. Edwards told the crowd to shut up and kept talking back to the crowd. Edwards told Alexander that they could in fact be standing side by side against the industry.  Edwards entered the ring and Heath eventually attacked Edwards out of the blue and hit a Wake Up Call as he ran away.

Raj Singh was backstage with Shera and said that they are on the brink of becoming unstoppable. Moose and Maclin were arguing at the bottom of a stairwell. As they argue, Sami Callihan attacked them both. Maclin was bleeding from the attack which consisted of barbed wire.

We get a Masha Slamovich promo

Jessicka dominated this match and it was yet another squash match on the show. Alisha was ht with a Spike Piledriver quick into the match to give Jessicka the win.

Sami Callihan came out to interrupt the show as he was wrapped in barbed wire. Callihan said that he wants Moose and Maclin at Victory Road on September 23 in a Barbed Wire Massacre match.

Doering and Kushida started things off and Doering tookthe quick advantage as he completely over powered KUSHIDA. As the match went on, Time Machine gained the advantage and as Eric Young was laying on the mat face down, Shelley grabbed one arm and leg as KUSHIDA grabbed his other arm and leg and slammed him on the ring post as Shelley delivered a running dropkick to Young’s face. Very clever triple team move here.

Doering took out Sabin which gave Violent By Design the advantage as we went into a commercial. Sabin was cut off from his team and took a lot of punishment. Sabin was able to slowly make his way to the corner and tagged KUSHIDA in. Time Machine then dominated and took control of the match which included a slue of diving attacks to all members of VBD on the outside of the ring.

Doering ended up hitting Sabin with a Powerslam and Deaner followed this up with a diving headbutt and Young quickly hit an elbow drop but this wasn’t enough to end the match. VBD was showing frustration which led to their downfall as Deaner was attacked by quick punches and kicks from all members of Time Machine. Sabin hit Deaner with a Cradle Shock for the win as the show ended…..

Next Week on Impact:

Pretty fun show overall. I was not a fan of back to back squashes but they are tryign to build up new stars. I can’t say I’m looking forward to another hardcore Barbed wire match featuring Sami Callihan though. VXT continue to dominate the women’s division and it will be interesting to see who challenges Grace moving forward. This Show overall did a good job of setting up stories for Victory Road on September 23rd while telling a long story between Edwards and Alexander for Bound for Glory.