Matt Cardona isn’t ‘politicking for anything’ in NWA 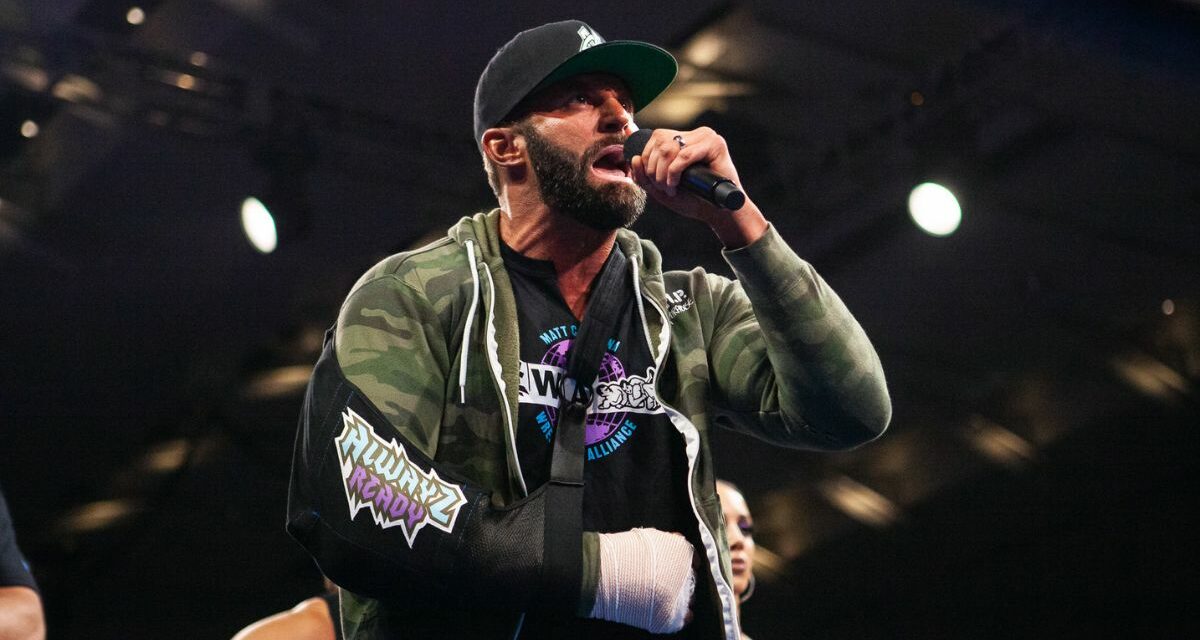 Despite being sidelined for three months with a torn bicep, 2022 might be an even better year for Matt Cardona than 2021.

Four months left to the year, and already he’s wrestled for the Impact World Title; faced Joey Janela in the Hammerstein Ballroom for GCW; started the Major Players with Brian Myers; and had an in-ring wedding ceremony at GCW. Not to mention winning the NWA World Heavyweight Championship from Trevor Murdoch.

“There’s a lot of people in NWA that think I’m there to take their spot, blah, blah blah. I’m not there to take anybody’s spot. I have my own spot,” said Cardona, who returns to in-ring competition this weekend at NWA 74 in St. Louis. “I’m not politicking for anything. I didn’t politick to get a world title opportunity. [NWA owner] Billy Corgan realized I was best for business and then I won the title and then I proved it as champion.”

He brought the title to shows where he wasn’t defending it. He took it to Disneyland. It was even along for the ride on his honeymoon.

“I brought it everywhere,” he said. “Love me or hate me, everyone in the wrestling world knew that Matt Cardona was the NWA World’s heavyweight champion.”

His name now is among the likes of Harley Race and Ricky Steamboat – not to mention the title’s NWA-TNA tenure with Jeff Jarrett and Christian Cage.

“A lot of the Matt Cardona haters thought I was going to spray paint the title or put a purple strap on it or make it a spinner,” he said. “No, I wasn’t going to do anything like that. I respect the tradition, the legacy of that title.” 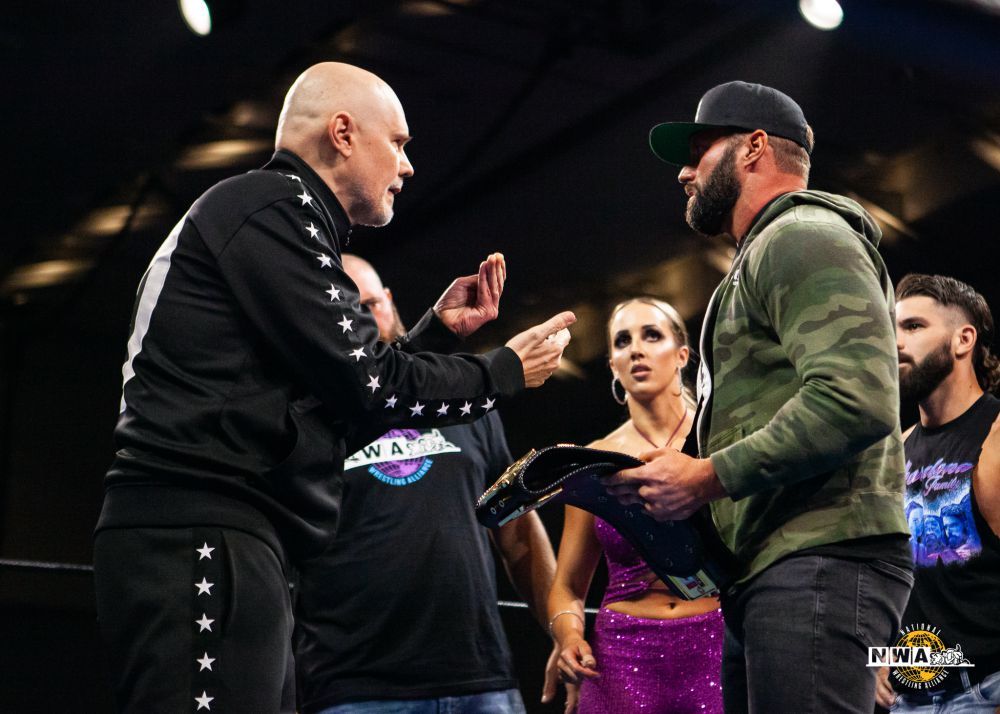 Billy Corgan is handed the NWA World Heavyweight title by an injured Matt Cardona on June 11, 2022, at the Alwayz Ready PPV. Photo by Hiban Huerta/NWA

It’s a legacy he hopes to add to in the future – just not this weekend.

Cardona said he made a deal with Corgan to come back early but to face a hand-picked opponent.

“I need someone that I’m confident being in the ring with. Somebody who I know that I can have a good match with,” Cardona said, “but also I’m not trying to get in there with Nick Aldis, who’s definitely going to try to hurt me on purpose. You know, try to re-injure that bicep. Or I’m not ready for Trevor Murdoch or Tyrus. One of those guys in the world title picture.”

While not revealing the opponent ahead of NWA 74, Cardona said the man he has chosen is an “up and coming” NWA star.

“He’s someone who needs an opportunity,” Cardona said. “And I’m kind of the thumbs up, thumbs down guy in wrestling. So if he can’t hang with me, he’s gotta burn his boots.” 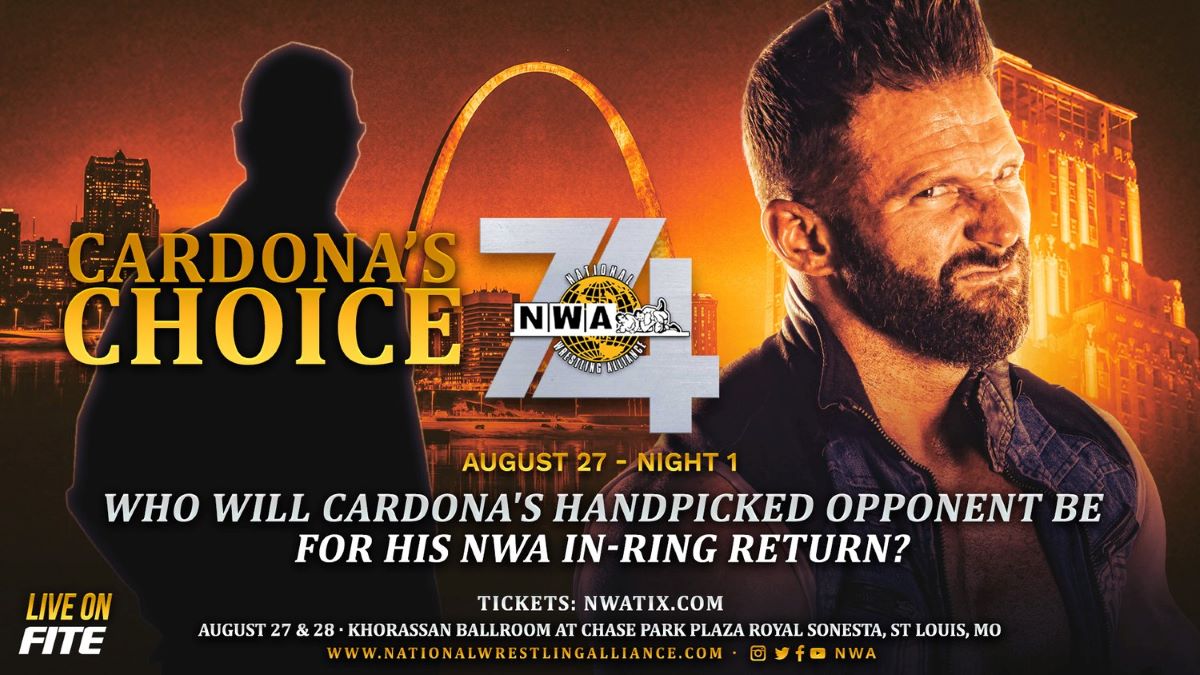 But Cardona knows he has that world title opportunity in his “back pocket” and is waiting until he’s “more than 100%” before setting that in motion.

As he rebounded from that torn bicep, he said he “didn’t miss a beat,” making the majority of his independent bookings and autograph signings, while keeping up with the Major Wrestling Figures Podcast he hosts with Myers.

Even if, by his own admission, it might not be the smartest decision.

“One great thing about being a free agent is that there’s no one that has to clear me,” he said. “I’m going to clear myself, you know. I think I’m ready for NWA 74. Maybe the smart move would be to wait and do the next NWA PPV in November, but I already missed my own damn PPV Alwayz Ready. I wasn’t going to miss another one.”

Plus, he just loves pro wrestling.

“I want to be in that ring,” he said. “It’s great to come out and manage Chelsea [Green] or talk trash or sign autographs, but I signed up for this business to wrestle, not to sign autographs.”

One could argue that winning the NWA World Heavyweight championship has been Cardona’s biggest “indie moment,” he said it’s what led up to that moment that made him.

“I believe if I didn’t win the GCW World championship, if I didn’t become the Death Match King, I would have never gotten to that point where NWA wanted me,” he said. “Of course, they would have wanted me, but to where like, ‘Oh we need this guy,’ or ‘We need him at the top.’”

NWA 74 returns Aug. 27 and 28 to the Khorassan Ballroom in St. Louis. For more information or to purchase tickets, visit the NWA website.