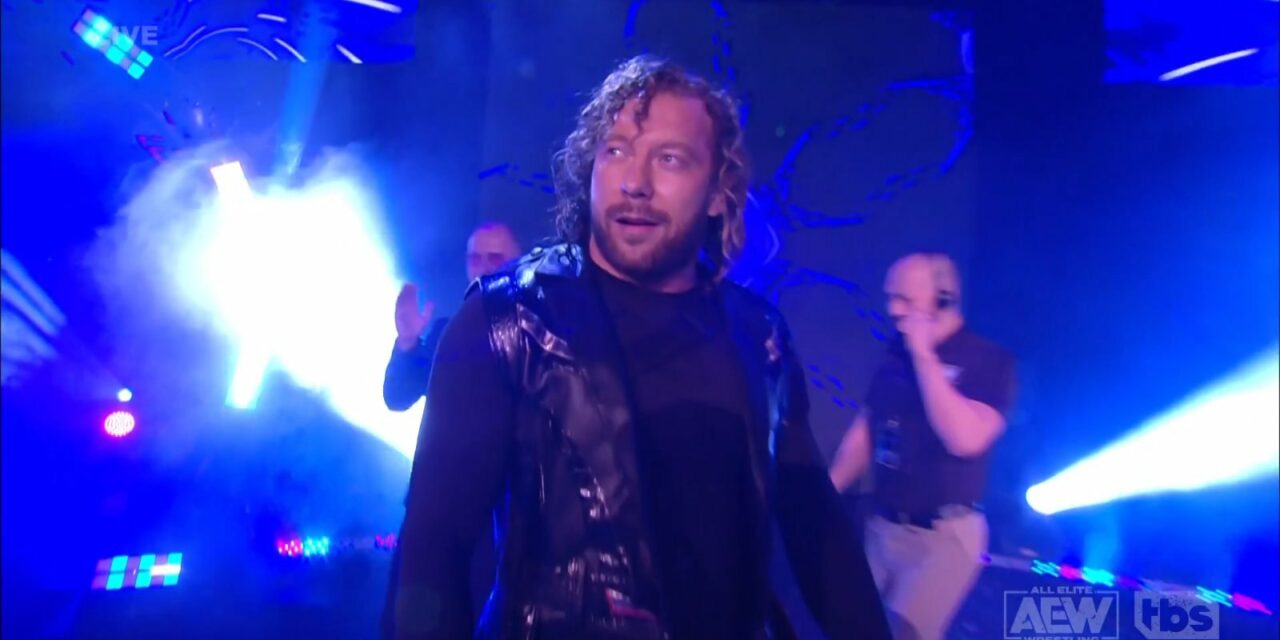 It’s Wednesday night and you know what that means! Corporate synergy! Tonight’s show is sponsored by the new HBO show “House of the Dragon”. It’s a “Game of Thrones” spin-off if you didn’t know. I don’t know what dragons and eggs have to do with wrestling but maybe we will find out tonight. Let’s get to the action.

AEW World Heavyweight champion, CM Punk, kicks off the show. He has a match with interim champ, Jon Moxley, looming on the horizon. Punk wants to challenge Hangman Adam Page to a rematch, right here, right now, if Page wants it. Punk sits down in the ring, but Page never answers the call. Punk seems to want an apology for the disrespect.

Punk turns his attention to Jon Moxley. Punk has always had his number. In fact, Mox is the third best guy in his group and that isn’t the first time that has happened. Punk starts to spit some truth, or at least truth in his eyes. On September fourth, Moxley won’t even be the first Jon he has beaten in Chicago for a title.

Wild Thing blares in the arena as Jon Moxley heads to the ring through the crowd. Moxley answers Punk, by saying that he isn’t even the best wrestler in catering, much less the world. The belt he carries doesn’t mean anything. Mox is the heart and soul of AEW. Punk is fine with that; he’ll be the dollars and cents. A shoving match breaks down into throwing fists. AEW officials try their best to keep the two apart.

Powerhouse Hobbs says he doesn’t need any friends. Ricky Starks is oaky with losing, but Hobbs isn’t. He has one job; to make sure Starks stayed champion and Starks could even do that with help.

“The Dragon” Bryan Danielson vs. “The Dragon Slayer” Daniel Garcia – 2 out of 3 Falls Match

Ricky “The Dragon” Steamboat is at ringside. So many dragons on House of the Dragon night! Who saw this coming? Chris Jericho joins the commentary team. And not even a minute into the match we get our first promo for the HBO show from commentary. SYNERGY! Garcia slaps Danielson in the corner and we go to picture in picture to see a commercial for House of the Dragon. SYNERGY!

After the commercial break, Danielson pummels Garcia into the corner and hits a running drop kick. Garcia counters a hurricanrana into a pinning attempt, but Bryan kicks out. Garcia with a suplex that he transitions into an armbar. Bryan with a suplex into a pin; Garcia kicks out. A drop kicks sends Garcia to the floor. He dodges a running knee and drops Bryan with a suplex on the floor. In the ring, Danielson fights off the Dragon Slayer hold, but Garcia hits him with a spike piledriver. He locks in a dragon sleeper. Danielson passes out and the ref calls the fall for Garcia.

Winner of the first fall by submission: Daniel Garcia

During the break, Garcia hit Danielson with a DDT on the exposed concrete on the floor. Garcia looks for the Dragon Sleeper again. He elbows Bryan in the face. Danielson counters by rolling Garcia over and getting the pin.

Winner of the second fall by pinfall: Bryan Danielson

Garcia gets himself hung up in the tree of woe. Bryan kicks away at him and then hammers away with elbow shots. A German suplex sends Garcia to the mat. Bryan follows with the missile drop kick and Garcia is knocked to the floor. Danielson rams Garcia into the ring post repeatedly. Garcia is able to yank Danielson into the ring post and both men hit the floor.

The match goes picture in picture for, you guessed it, another House of the Dragon promo. SYNERGY! After the break, Danielson is locked in the Dragon Tamer. Bryan counters into the Lebell lock. Garcia counters into a pin; Bryan kicks out. Garcia delivers a running knee. The two trade elbow shots in the middle of the ring. Danielson drives Garcia into the mat and looks to kick his head in. Garcia reverses the hold and kicks Bryan’s head. Danielson with head butts and follows with stomps. Bryan locks in the triangle sleeper. Garcia tries to counters with a powerbomb, but collapses back to the mat. Danielson applies the Lebell lock. Danielson with elbow strikes to the head and reapplies the Lebell Lock. Garcia passes out and the ref calls for the bell.

After the match, Danielson shows Garcia respect extending the hand. Garcia doesn’t get a chance to shake, as Chris Jericho attacks Bryan from behind. Garcia pulls Jericho off Danielson and then slaps Jericho’s hand out of his face.

Swerve in our Glory will be taking on Private Party. Swerve tells the boys that they could learn something from him. The match goes down Friday on Rampage.

Tony Nese was on his way to the ring for match, until Jon Moxley wiped him out. Mox hits the ring and he wants a match with CM Punk right now. Punk runs to the ring, with AEW officials in chase. Jon goes after him on the floor as AEW staff struggle to keep the two apart.

Tony Schiavone asks Jericho about any possible dissension in the JAS. Jericho wants to talk to Garcia next week in the ring and find out what side he is on. Ricky Steamboat wants a word with Jericho. He sees the Garcia doesn’t need Jericho and Danielson would be the better mentor. Jericho tells the Dragon to stay out of his business. Angelo Parker gets in Steamboat’s face. Ricky lays him out in one shot.

The Varsity Blondes vs.  The Gunn Club w/Billy Gunn

Oh boy, Griff Garrison gets taken out behind the wood shed. Austin and Colton put a beating on him before finishing him off with the Colt 45.

Winners via pinfall: The Gunn Club

After the match, Billy tells his boys that he is proud of them and working with them has been on the greatest things of his career. Stokely Hathaway walks down the ramp. Austin and Colton turn on their father, beating him down. Max Caster and Anthony Bowens run down to make the save. Billy is more than happy to see them.

Death Triangle have returned and they are ready for the Trios tournament. Pac has his sights set on Will Osprey.

Jungle Boy is in the ring and calls out Christian Cage. He wants Cage to man up and face him at All Out. Christian flat out tells Jungle Boy no. He knows this is getting out of hand. Cage says he is proud of him, though. Christian has done some reflecting. He doesn’t want to fight. He wants to fix their relationship. He wants to take Jungle Boy to the promise land. The crowd sees through this BS, and hopefully so does Jungle Boy. Cage tells JB he loves him like a son and wants a hug. Jungle Boy takes down Cage, raining down punches on him. Cage rolls out of the ring and JB gives chase. Christian with a low blow and smashes him head first into the barricade. Cage is run into the ring steps and JB smashes his head into the steps. He then stomps on Cage’s elbow. AEW staff finally separates them.

Storm with side headlock. King reverses the hold and takes Storm to the mat. King dodges a low drop kick. Storm avoids a drop kick and then connects with one of her own. King with a knee strike on the apron, sending Storm to the floor. King blocks a DDT and rams Storm into the apron. We go picture in picture again for you guessed it, a House of the Dragon promo. SYNERGY!

After the commercials, Storm gets kicked in the head. King with a spine buster, but Toni kicks out. Storm with a German suplex and follows with a hip attack. She hits a swinging DDT followed by a pendulum DDT. Storm covers and gets the pin.

In the back, Thunder Rose gives an unenthusiastic clap.

The Young Bucks make their entrance for the Trios Tournament, but they still need a third. Jim Ross and Tazz speculate that it’s Brandon Cutler. Well, Justin Roberts starts his introduction and everyone in the building knows the third team member is Kenny Omega. Don Callis has also returned and joins commentary.

Omega is sporting a brace on his shoulder. Dragon Lee shakes Omega’s hand on the apron. Nick Jackson takes Lee for a rope walk and hits an arm drag. Kenny makes an early tag, hitting Lee with a double axe handle off the ropes. He pummels Lee in the corner. Kenny with a rolling flip and tags in Matt. Nick joins him for some double team action on Lee with a neck breaker. Omega chops Lee in the corner, but Lee breaks out of the corner. He tags in Andrade. Jose jumps to the apron. The distraction give Rush an opportunity to hit Kenny with a cheap shot. It gives us a chance for another House of the Dragon promo. SYNERGY!

After the commercials, Matt Jackson is double teamed by Lee and Rush. Nick runs in to make the save. Andrade makes into three on two, but Kenny evens the odds, allowing him and the Bucks to hit all three with a massive suplex. Lee takes a back breaker from Omega. Nick hits a stomp and Matt follows with flying elbow. Rush breaks up the pin and hits Nick with an exploder suplex. Matt kicks out if a pin by Lee. Matt gets triple teamed in the corner and then eats a triple drop kick.

After another SYNERG! break, Rush kicks Matt in the face in the corner and does some showboating. Nick hits Dragon Lee with a super kick. Matt knocks Lee into Andrade and gets the tag to Omega. Kenny fights off Rush and Andrade with suplex. Lee wants to join in and takes a suplex. Nick and Matt hit superkicks on Rush and Andrade. Lee gets caught on a hurricanrana and power bombed into the turnbuckle. Lee gets an invite to the superkick party; Andrade breaks the pin. Kenny is alone in the ring. Lee trips him up coming off the ropes. Omega tosses Lee back to the floor. Omega then gets tripped up by Jose behind the ref’s back. Kenny is held up on the guardrail and Dragon Lee knocks him into the crowd with a suicide dive. Omega is rolled into the ring, but Lee can’t get the three count. Andrade goes up top, but is slowed up my Nick Jackson. Andrade with the moonsault, but can’t get the pin. Andrade hits the Hammerlock DDT. Dragon Lee with the tag. Omega with a knee strike out of nowhere. Kenny hits the V Trigger and picks up Lee for the One Winged Angel. The Bucks keep Rush and Andrade at bay as Omega hits the One Winged Angel. Omega covers and gets the pin to move on in the tournament.

Winners via pinfall: The Young Bucks and Kenny Omega

After the match, Andrade hits Dragon Lee with a DDT. See you in seven!

All House of the Dragon and SYNERGY! jokes aside, Dynamite was on fire tonight and not just because of the dragons. There’s great wrestling up and down tonight’s card.  If the main event is a preview of what’s to come in the Trios Tournament it is going to be one heck of a ride.