Femme Fatales highlight Fight for the Fallen on AEW Rampage 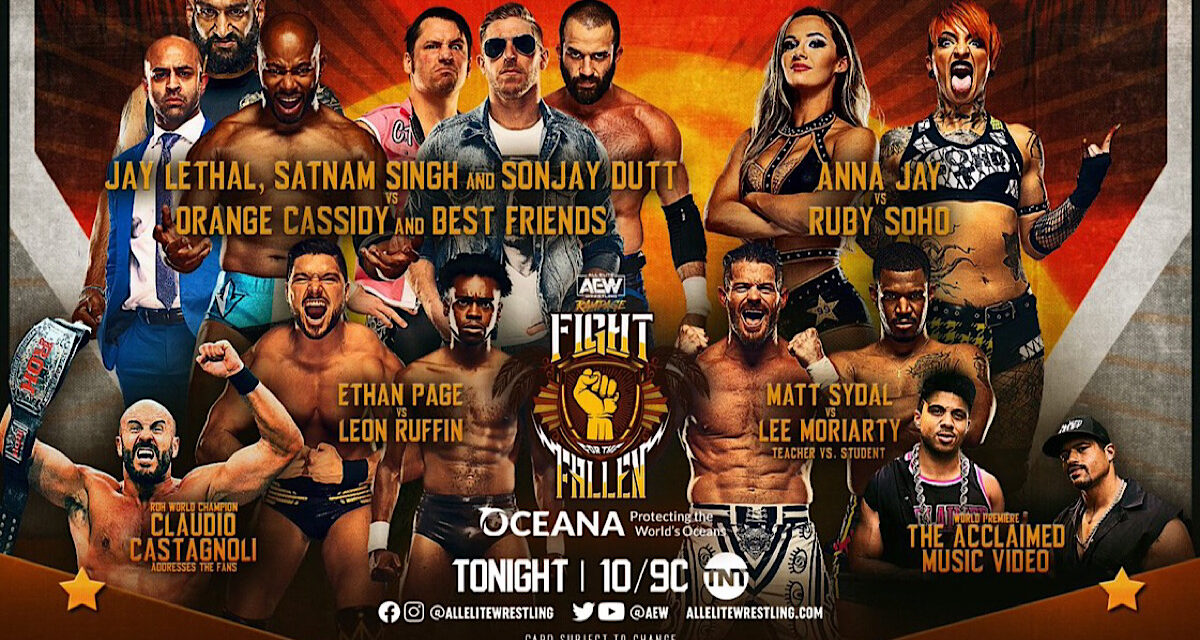 It’s Friday night and it’s night two of Fight for the Fallen, and you know what that means. So let’s jump into it

because it’s AEW Rampage, where we have Best Friends in action against Jay Lethal and company in trios action, plus Anna Jay wants to add more pain to Ruby Soho, and Soho has revenge on her mind.

We head again to the DCU Arena in Worcester, MA. Excalibur, Jim Ross, Tony Sch,iavone and Chris Jericho have the call, and it’s time for trios action with… 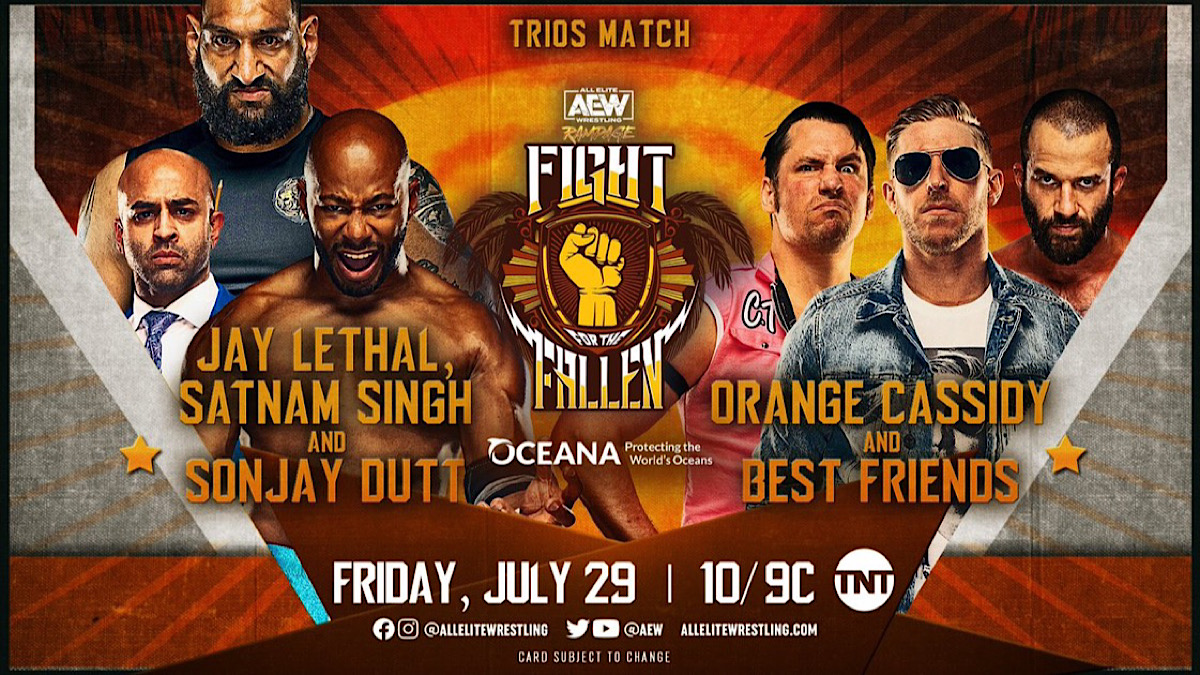 Dutt is wearing a suit, while all the men in the ring are in wrestling attire.  How very Low-Ki of him (see what I did there?  Is this thing on?)

Lethal and Beretta t off and wrestle to a stalemate.  Tag to Cassidy and the King of Sloth Style wants…Satnam Singh?! Lethal looks at him and obliges…by tagging in Dutt.  As Dutt makes a big production of taking off his jacket and tie to give to the ref (all while keeping g his trusty pencil behind his ear), Cassidy lights him up with his patented “kicks.”  Dutt has had enough and now Singh is tagged in, and he levels Cassidy along with the rest of The Best Friends.

During Picture in Picture, they keep Cassidy grounded and he is an Orange in Peril.  Cassidy tries to get the tag in his corner, and Lethal blocks every attempt.  It’s only when he leapfrogs over Lethal that Cassidy gets the (oh…let’s be charitable and call it a) hot tag, and Taylor is in, and now Beretta joins the fun and they are Best Friends en Fuego.  Again, Singh is the difference maker in this match, but the Best Friends manage to send him out to the floor,  and they Give the People What They Want in the center of the ring, but Lethal breaks it up with a double Lethal Injection.  Cassidy is back in and gets a tornado DDT to Lethal. Dutt is in and Cassidy-style style “kicks” to the Orange one, but Cassidy grabs his pencil and breaks it in half.  Dutt is upset and lunges, but Cassidy delivers with the Orange Punch to get the win.

Your Winners via Pinfall:  Orange Cassidy and Best Friends

After the match, Singh, Lethal, and Dutt beat down on Cassidy and the Best Friends.  However, Wardlow made a run-in to save them, and they back off.  Curious what that means for the TNT title picture now.

There’s a recap of the ROH tag team match with FTR and the Briscoes from the Death Before Dishonor PPV but check it here if you missed it.

And now for something different, here’s a rematch with…

Yeah, I’m not gonna lie:  this match has AEW DARK written all over it, and I just don’t recap squash matches. So enjoy this Haiku instead of the match.

The ring and Page ensures he

Your Winner via Pinfall:  Ethan Page

Lexi Nair is with Cole Carter on his first win on AEW, and The Factory comes out in force.  QT Marshall sees potential and wants him to join, but tells him to sleep on it…only, he wants Carter to do it is own bed.

And now for a teacher versus student match, we get…

This came about from the cheap win Moriarty got last week on AEW Rampage, and Sydal ain’t happy about it and wants to teach his student some respect.  They shake hands at the start, and then Moriarty headbutts Sydal hard.  Moriarty gets a front chancery suplex for a two count, but the teacher Sydal displays that veteran prowess as he gets a knee and goes to beat respect into his student.  During Picture in Picture, Sydal is on a warpath sending Moriarty to the otside, and then gets on the ring apron with double knees crashing into Moriarty.  But Moriarty manages to whip Sydal hard to the guardrails, and follows with a running boot..an…then..

(Author’s Rant:  Maybe it’s the multiple belts of Suntory Whiskey before to recapping; maybe I have just been in a foul mood in general. I know everyone that reads this recap is eye-roating on my semi-famous manifestos.  The fact remains that I am going to continue to bitch and moan and complain about this until I get a straight answer:  Why go to commercials, when the Picture in Picture feature allows commercials while the action takes place in the ring?!  There is no bloody reason to do that when the tool allows you to serve up ads without a hiccup in the action!  End Rant.)

We come back, and Sydal is back in control and gets a huracanrana to cover for a two count.  But Moriarty nails a wicked hammerlock lariat to Sydal and follows up with knees to his teacher.  Sydal comes back with a roundhouse kick to Moriarty’s neck and then delivers the Landing Spiral for a close two count.  Now Stokely Hathaway comes out from the back, and Sydal is distracted by his presence at ringside. Moriarty goes up top to take advantage of this and Sydal manages to push him off, but Moriarty pulls up limp.  As the ref checks on him, Hathaway attacks Sydal up the top turnbuckle but he’s able to fend him off.  Moriarty comes back and knocks off Sydal from the top turnbuckle.  It’s all Taiga Style as he gets an implant DDT for a two count, and then transitions to the Border City Stretch and Sydal has no choice but to tap out.

Your Winner via Submission:  Lee Moriarty

Moriarty keeps the hold locked on well after the match ends, but Hathaway calls off the ttack .  He steps in the ring and hands his card to Moriarty, and we have a new partnership with Hathaway and Taiga Style.

Dr. Britt Baker, D.M.D. is with Rebel, and she calls for a storm on the horizon against Thunder Rosa.  Here’s what she had to say…

Tony Schiavone is in the ring to introduce the new ROH Champion, Claudio Castagnoli. He cuts a promo with William Regal at his side, and  Castagnoli acknowledges the fans chanting “You Deserve It!*Clap Clap*Clap Clap Clap*”, saying thanks in all the various languages he knows. He brings out his Blackpool Combat Club mate, Wheeler Yuta, and Jericho interrupts the love fest. Jericho states that a sports entertainer will always beat a pro wrestler, but Yuta says to shut up. Yuta notes he beat his boy Daniel Garcia at Death Before Dishonor (again, check it here if you missed it), and bets he can beat him, too. Jericho challenges Yuta to a match with the stipulation that if Yuta wins, he will face the Interim AEW World Champion, Jon Moxley. Yuta notes how easy it was to get him to do that and accepts Jericho’s challenge next week on AEW Dynamite.

And The Acclaimed deliver their music video, and it’s…well…

I will say this:  They’re no Bad Bunny.  That’s not a diss; that’s me acknowledging the fact they can rap and drop tracks.  So I’m OK with this.

Mark Henry is with Ruby Soho and Anna Jay with their final words before the match, but Jay says no one wants to hear from Soho, as sh’ll beat her down and finish what was started. Soho retorts that she had high hopes for Jay, but says she’s an entitled s*** and tells her to leave her Circle Jerk Appreciation Society (nice burn). Jay promises to choke her out.

Looks like that’s been enough talk, Henry says, because it’s time for the Main Event… 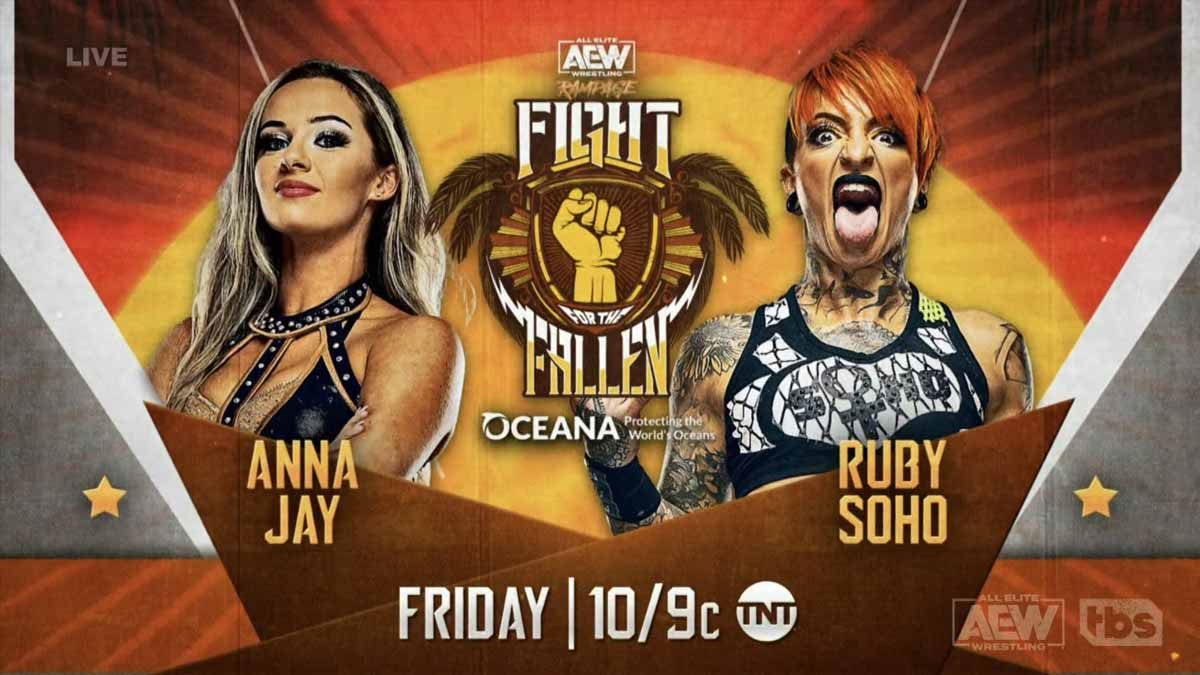 Soho has her arm in a brace, and that will be a factor since Jay slammed it in a car door.  Jay starts strong but it isn’t long before Soho takes over and looks for the No Future finisher but Jay evades.  Soho tries to ram Jay’s head into the corner, but she tosses her off, and Soho comes down hard on the injured arm.  Jay comes back with a rolling kick to the corner, and During Picture in Picture, Jay smells blood in the water and is adding more pain to Soho, slamming her bad arm hard to the mat

Soho fires back, but Jay takes her down by her bad arm and wrenches it back with a nasty Fujiwara armbar.  Soho manages to reverse with a back suplex to create space, but Jay gets a Greco-Roman knucklelock to the bad arm, and Soho head butts furiously to escape the hold.  Soho comes back with a Superkick to an STO and covers for a two count.  Jay gets a Gory Special variation to cover for a two count of hr own, and then follows quickly with a basement superkick for the same result.  She grabs Soho’s hair and locks the Queenslayer submission, but Soho counters to a pin and she has to break the hold. Soho finally nails No Future and covers Jay for the one, two…oh, so close.  Soho goes for a senton.  Jay dodges and Soho lands hard on her tailbone on the mat.  Jay goes back to the Queenslayer and then switches to crossface forearms.  Now the gauntlets come off, and as the ref deals with that, jay takes off the brace from Soho’s arm and uses it to add more pressure to the Queenslayer.  The ref does see, what’s being used, but Soho is out like a light and that’s when the ref calls it.

Your Winner via Submission:  Anna Jay

Jay celebrates the win, as the show fades to black.

Not a bad show.  The Trios match and Jay/Soho bookended the show nicely.  The middle left a lot to be desired, but it was bad.  Just kinda…meh.  I will say the music video by The Acclaimed was a nice touch, and Yuta challenging Jericho added another element, and those things gave this show a boost.

So until then, see ya in seven!