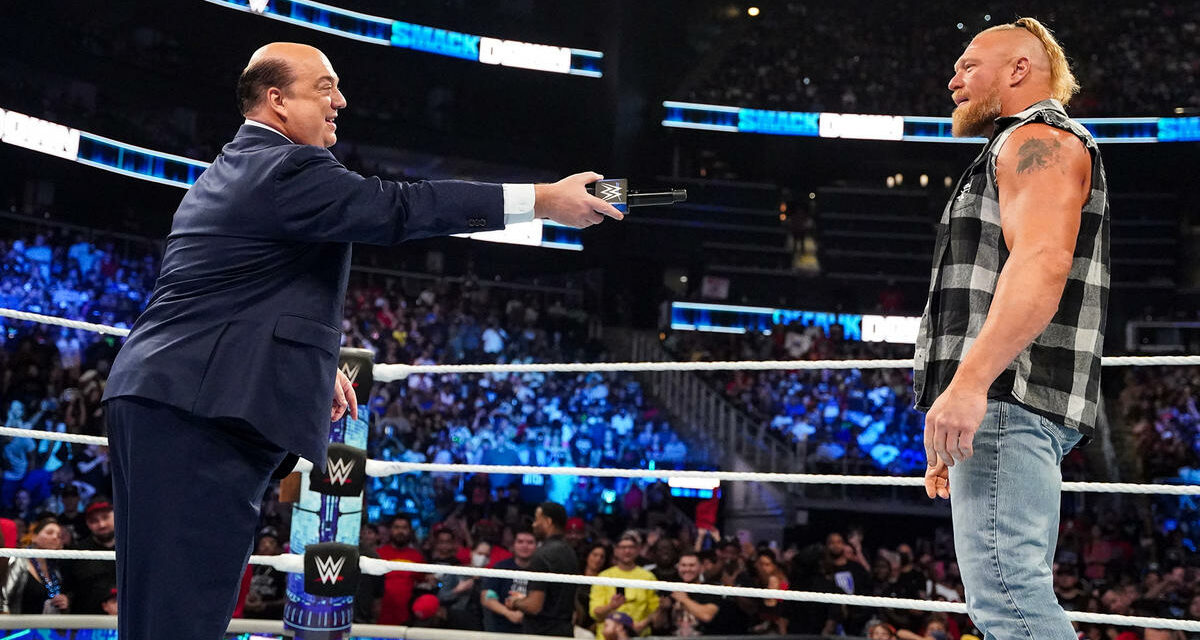 I was just trying to imitate the Usos’ battle cry with one of my own. It might feel weird because you can’t hear me, but I made my point regardless. SummerSlam is tomorrow night and I am pumped!

But before that we have some amazing rivalries to settle here tonight, people to piss off and fights gallore. Hopefully.

As Drew makes his entrance, without his sword mind you, Sheamus attacks McIntyre from behind long before the match has officially started.

But there’s no time for that because Sheamus takes Drew out for a brutal ride by providing multiple haymakers.

Since this is a Donnybrook match where using any object is legal Sheamus tries to use a shillelagh on McIntyre. McIntyre dodges.

Although, Drew has been swerving through Sheamus’ attacks he did manage to take control of the match as Sheamus tries to send Drew into a table he set up near the timekeeper’s area only for McIntyre to German Suplex Sheamus onto his back then throws him into some barrels.

During the break, McIntyre uses the ring post to his advantage slamming Sheamus’ shoulder into it. Drew brings at least seven steel chairs into the ring. Shemaus uses one to crack  Drew in the head.

The chairs were then stacked into a tiny pile as McIntyre DDTs and Future Shocks Sheamus onto those chairs head-first thinking that’s enough to put him away. McIntyre prepares himself for another attack until suddenly Ridge Holland shows up and smacks McIntyre’s back with a much longer-looking shillelagh. That, however, didn’t take Drew out.

McIntyre unleashes hell on Ridge with bone-breaking whips into ring posts and barricades.

I questioned where the real Sheamus was last week and he’s here tonight. I certainly hope he continues to be this better version of himself and not whatever is it I’ve been seeing for the past months.

After Drew takes the helm by sending Sheamus into a fake bar with the Celtic Warrior’s family crests on it. Butch is the next person to interfere by jumping from the top of some barrels.

McIntyre hits Claymore Country on Butch. Drew turns around and receives a  by Sheamus Brogue Kick. This was supposed to be it but it wasn’t. Drew kicks out.

Drew goes for another Claymore for the win. Drew reminds us on the mic that someone has to take those titles from Roman Reigns, the “part-time champion”.

Theory attacks Drew from behind and reminds him that he will use his Money in the Bank briefcase to become the Undisputed Champion. Yuck!

Oh, hey. Would you look at that. Surprisingly, Happy Corbin arrives as one of the paying public with a ticket and popcorn. He sits right behind Pat to mock him. Pat is enraged that he can’t fight Corbin… yet, but he will bust him up tomorrow, which will be so much sweeter.

Why did I think Corbin could actually behave for once? I don’t know. He throws his popcorn into McAfee’s face, taunting him. Corbin jumps the barricade. They brawl. McAfee gets kicked in the “family assets”.

Oddly, a lot of people have been kicked there this month. Is this going to be a running theme? It’s hilarious though.

And speaking of funny, Theory is so sure he will become the Undisputed Champion during an interview that Paul Heyman baits him with the “bigger picture” if Theory doesn’t cash in on Roman Reigns. This man is truly everywhere I don’t need him to be. I’m talking about Theory, in case you didn’t know.

Apparently, this match was supposed to be Aliyah squaring off against Lacey Evans, unfortunately, Evans is too disrespected, I mean not cleared to partake tonight. So, who better than Shotzi to manipulate her way into this match as Aliyah’s new opponent?

Shotzi did tell Michael Cole that Aliyah is too “bubbly” for her taste. Ooh, petty and evil.

Anyway, Aliyah is doing okay for the start of this match. She gives her a couple of right hands to the head after a Thesz Press. Shotzi spun Aliyah around so she could lock on a submission. It failed, obviously.

Aliyah is later seen on the apron, jumps and lands on top of Shotzi as she delivers multiple punches. Aliyah thought she was on a roll, which is hilarious because when she wanted to shove her opponent into the steel post, it was Aliyah who collides with it instead. I did say Aliyah was doing okay, after all.

Shotzi gathers whatever strength she has left to perform her Never Wake Up for the win over Aliyah.

I can’t blame her. Ronda Rousey has been in a mood since losing her Woman’s SmackDown Championship title against Liv Morgan. They were taking pictures for the upcoming match they will have tomorrow for the belt gold backstage.

Natalya is still pissed off, love it, because she’s the reason why Morgan won in the first place. I can kind of see it, but I won’t say more than that, or we’ll be here for a while.

Rousey marches into the ring after Aliyah and Shotzi’s match to force Morgan to come out for a bit after shoving Shotzi on her ass. Can you do that again?

We start this fight with Ronda and Nattie as Natalya pushes Rousey with petty hands because those are entertaining to watch.

Ronda tries to cover Nattie so she tags Morgan to confront Sonya, who gets tagged in too. Deville kicks the champ into a corner. Morgan gains momentum by delivering a jump kick to Sonya then a running shot as Deville cries in pain.

Ronda tags herself in after Liv refuses tag out multiple time. Sonya comes charging in, Liv ducks, another word for “matrix” in this context and Rousey kicks Deville down.

Arrogance can either help you or break you. There was a little unrest as Morgan tags herself in. Deville pulls her and she lands face-first on the apron then hits the barricade.

Morgan is in trouble with both Nattie and Deville hitting punches and kicks. Morgan wants to be the one who gets the win without Ronda’s help because when she had the chance to tag Rousey, Morgan didn’t many more times.

Liv receives a boot to the face, which could take her out, but she high kicks Deville in her face as she crawls towards Rousey. Ronda tags herself in and hit the ring totally on fire.

Ronda has Sonya into an ankle lock and Deville taps out like a whining brat.

The Street Profits are here with the champ twins, the Usos and Jeff Jarrett. Double J has some words to share with the tag teams.

He does get interrupted as the Profits and the Usos go at it with words of their own as to what is and isn’t legal for tomorrow’s match.

I was absolutely bewildered when Jey went for to super kick Montez, yet regrettably Jeff is the one who got bashed. Jey does apologize numerous times before making their exit.

Maxxine Dupri arrives to unveil the WWE summer collection from Maximum Male Models. I wanted to look anywhere else but Max Dupri is back with Maxxine, Macé and Mansoör model the SummerSlam line for our enjoyment.

I hope I can safely say that those cheap attacks that’s been going on between The New Day and the Vikings for weeks has come to an end where New Day can finally take things a bit more seriously rather than rely on jokes and games.

Kofi and Eric begin this fight as Kingston is bulldozed into the Raiders’ corner, providing hard punches and body crushing moves. Ivar takes the opportunity to yank Kofi’s hair, so he could hit the ground. Ivar leaps off from the apron, charges Kofi with whatever space is there to cross body Kingston against the barricades.

Xavier Woods is tagged in to face Eric and gains a much needed boost. Woods is dominating his part by shipping Ivar outside the ring when he tried to help Eric. Woods bounces off the ropes, runs and kicks Ivar, who’s already at ringside.

Kofi tags himself in. He waits patiently until Woods swings Eric upwards and throws him on the mat face-first. Kingston jumps from the top turnbuckle and lands on Eric’s back for a cover but Ivar’s breaks things up.

Woods rushes back in. Ivar spin kicks him so quick that I thought Xavier’s head would disconnect. Kingston helps by heel kicking Ivar.

Kofi was on a momentary pathway to victory until Eric turns the tables and mashes Kingston with a menacing knee to the jaw. It sounded like glass, but with bones and skin. “That knee….” said McAfee

The Vikings work together, so they could powerbomb Kofi for the win.

Even with that triumph the Vikings got, they had one thing left to do. They took a steel chair, placed Woods’ ankle between it, then used their shields to smash that ankle to pieces. Xavier screamed out in agony.

As we conclude the night, Paul Heyman, Roman Reigns’ special council, which I prefer to call a weasel, a snake and a rat, has an announcement for us. This is how you end the night? With him? Good lord!

Well, he looks annoyed. Why? He says he serves Reigns, which makes him sound like a literal servant at a castle, so I’d assume he enjoys scurrying.

The reason why Heyman is beyond unhinged is due to the somewhat audacious actions of Brock Lesnar daring to challege Reigns. I remember someone mentioned to me that Heyman is a fluid speaker, never hesitates, but for the first time ever, I promise you… Heyman actually hesitated for a second. Just one, but I noticed it.

Brock appears out of nowhere and backs a frightened Paul into a corner. Theory arrives and hits Lesnar with his briefcase like last week.

McIntyre catches Theory fleeing and takes him for a trip to Claymore Country. Brock delivers an F5 to Theory to cap off the night.

Paul Heyman may have escaped the long-awaited beating he so lavishly deserves, I won’t hold my breath, but he will get it. Yes, fans, he will. And I’ll be sitting here waiting for it. Maybe he will get his at SummerSlam tomorrow night.

TOP PHOTO: Paul Heyman tries to be cordial and hand the mic to Brock Lesnar. Courtesy of WWE